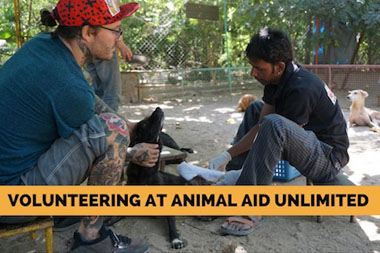 A few years ago I stumbled upon several videos of severely injured animals being rescued by local heroes in India.

Some of the videos were very graphic, and every single one was incredibly touching. It was so wonderful to see how gentle the people were with these animals. 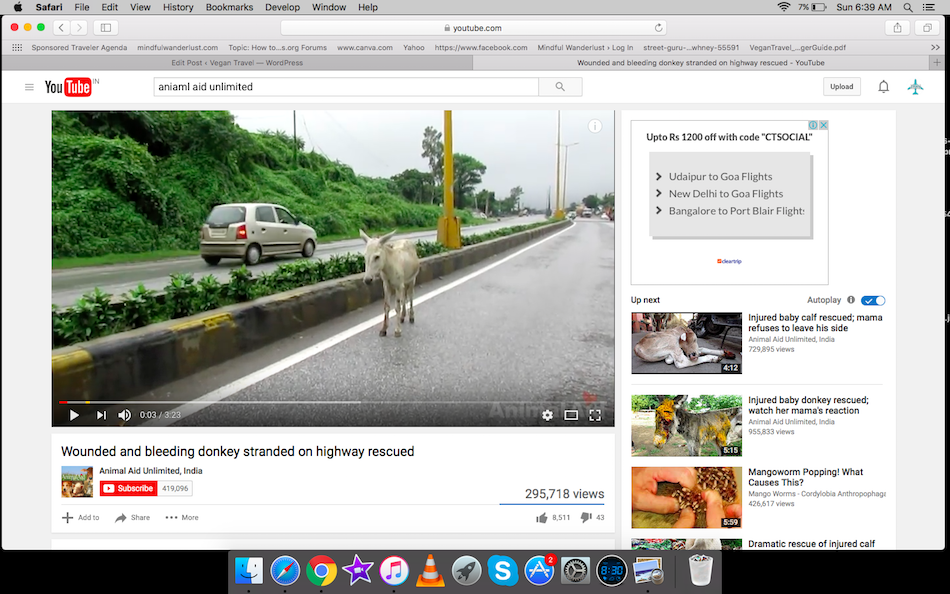 How much care they put into easing their fear. The videos were created by an organization called Animal Aid Unlimited.

I had hoped to visit one day, and that day finally came during our 2nd trip to India.

Originally Cody and I were supposed to spend 7 days volunteering at Animal Aid, but in between debilitating Delhi belly, and kidney stones, we only managed to volunteer for 3 days.

It was still enough time to grasp the routine and visit with a lot of animals under their care. 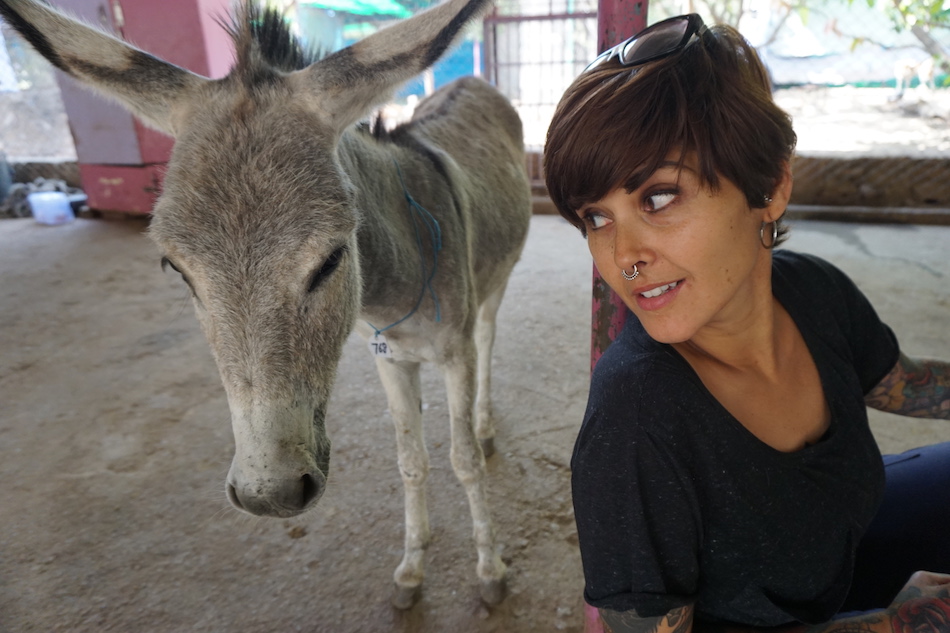 Originally from Seattle, Erika, Jim, and Claire Abrams-Meyers are the founders of Animal Aid.

The Family started travelling to India and were living in Udaipur, Rajasthan for several months every year in the 90’s. 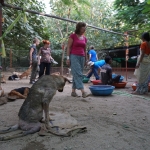 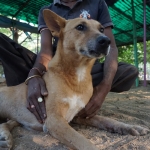 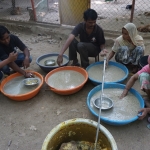 They couldn’t help but notice all of the injured animals on the street, and it broke their hearts.

There was nowhere to turn to, so in 2002, their lives changed forever when they founded Animal Aid and opened the first hospital in 2003. At that time there were only 4 staff members. 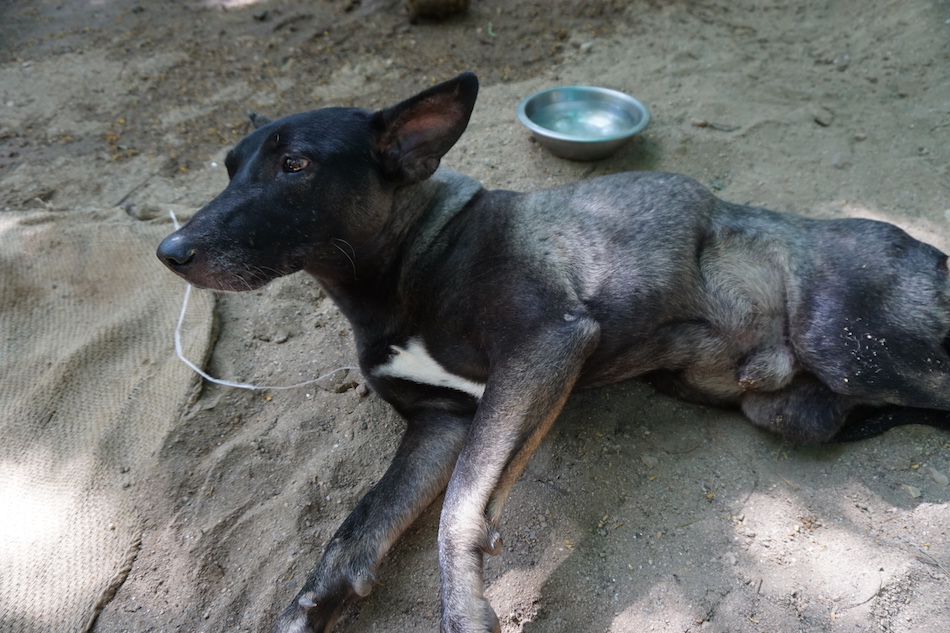 Today they have over 60 staff members and have rescued over 65,000 street animals.

400 animals–250 who are under treatment and the rest in sanctuary –are housed each day, and volunteers from all over the world spend their time at the sanctuary helping with whatever is needed. 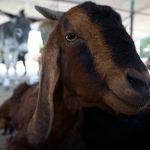 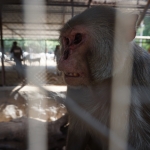 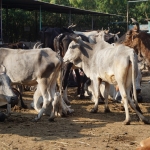 Living on the streets is difficult for stray dogs, cats, and working animals. Cars speed by hitting cows, dogs find themselves trapped in holes, injured, and infected, and donkeys are over-worked, and often also injured on the streets.

Animal Aid is working for the day that every animal-cow, pig, fish, donkey, dog, and cat can live their lives in freedom.

Their ultimate goal is equality and protection for all animals, so naturally, the founding family is vegan. 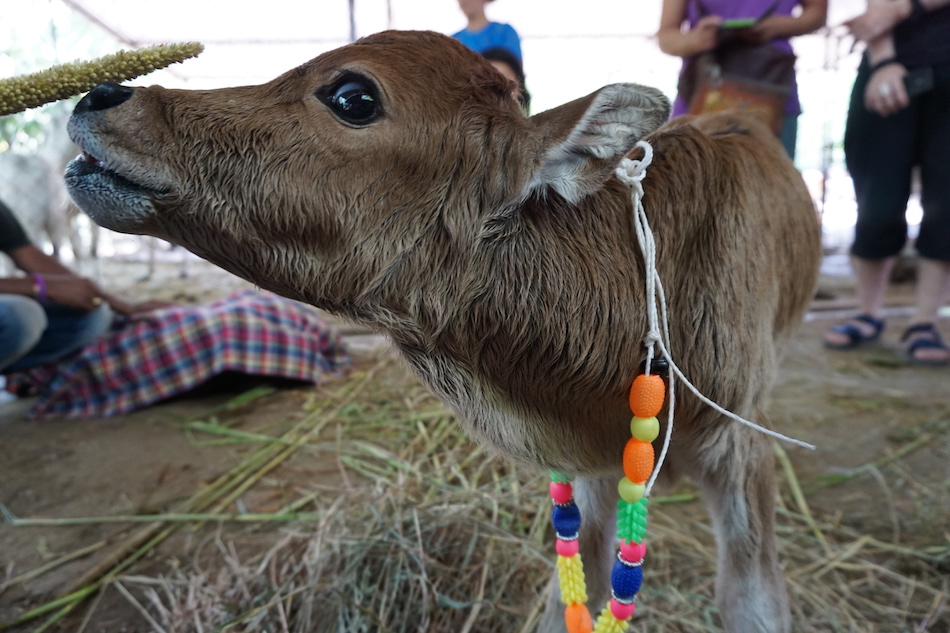 Based out of Udaipur, Rajasthan, India, the emergency rescue team responds to calls on the help-line reporting sick or wounded animals in need of help throughout the day, every day.

Animal Aid is the life-line for thousands of animals who otherwise wouldn’t stand a chance.

The work done at Animal Aid is nothing short of inspiring and every single staff member cares so much about the animals. 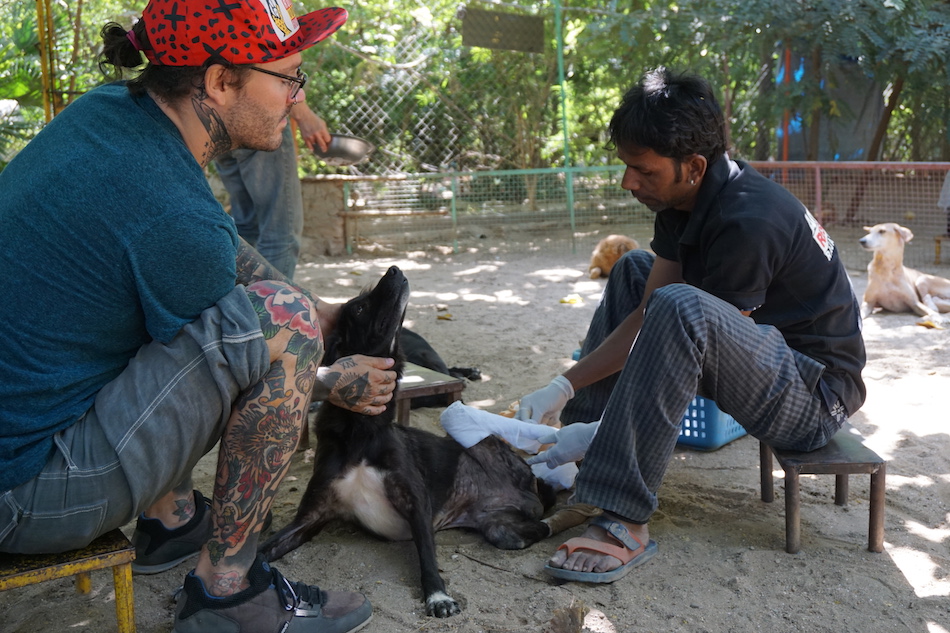 You can see it in their gentle touch. They hug, kiss, and pet all of the residents and care so well for them.

Each morning Cody and I would arrive and go straight to the disabled dog run where we would spend time with paralyzed dogs. 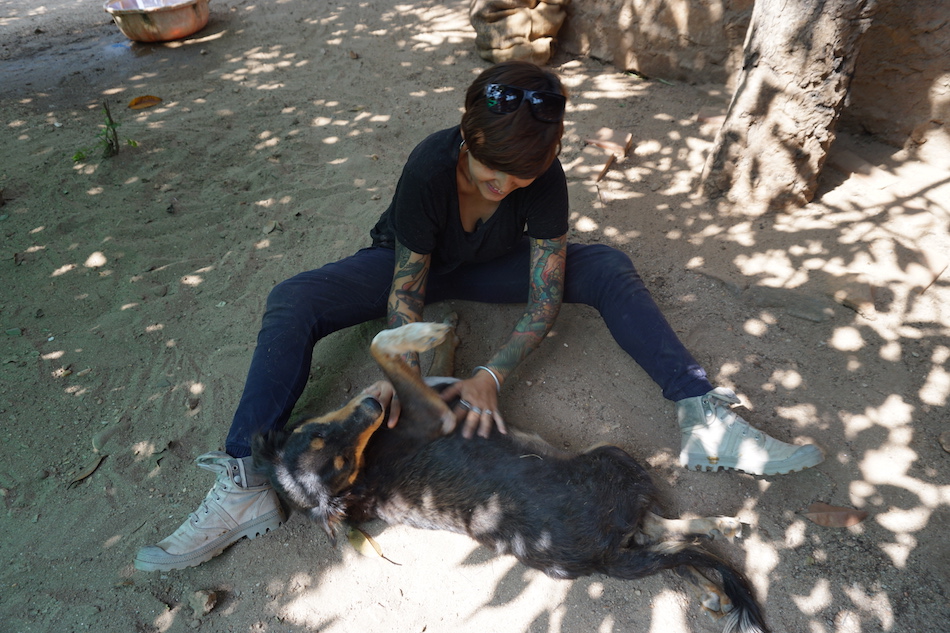 We helped feed them, and then gave them their longed for scratches. You see, when a dogs back legs are paralyzed, they are not able to scratch their ears, sides, faces, or any other part of their body, so they need a helping hand-or 2.

We spent several hours each day doling out much appreciated scratches and they could not get enough.

After a short tea break, it was calf feeding time. 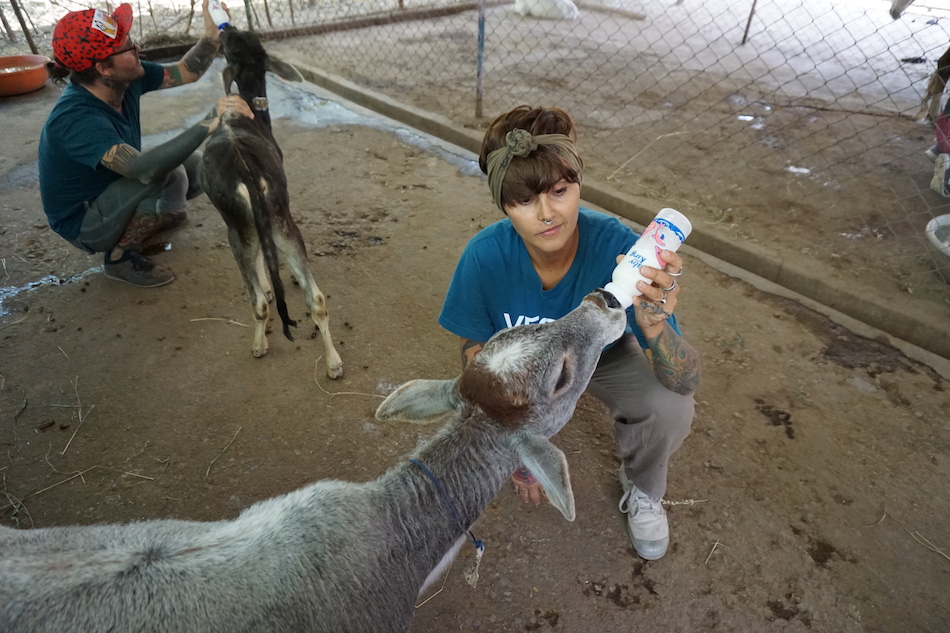 These babies are fed by humans twice a day because their mothers were killed in one way or another. Some were hit by vehicles, others frightened by fireworks running off after giving birth.

We also spent quite a bit of time with the donkeys in the sanctuary. Some animals are just in for treatment, and others have a forever home at Animal Aid.

These beautiful equines were too injured to continue working. 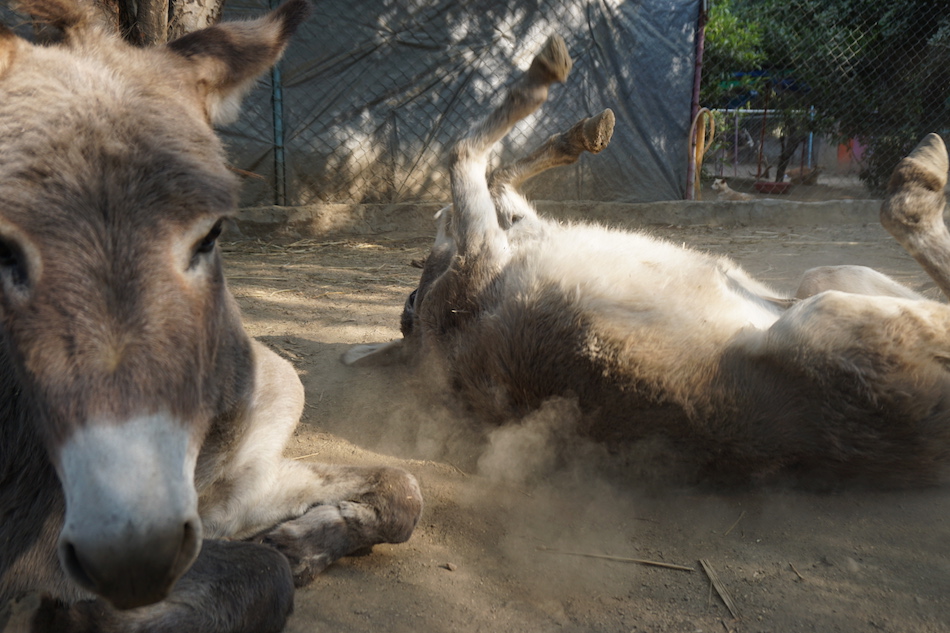 The clinic/treatment centre on the grounds also acts as a hospice for patients living out their final days. It was so difficult seeing animals laying on mattresses waiting to pass; but they were pain free, and given affection by volunteers and employees, which beats dying on the street.

Hospice’s are not a common sight at most sanctuaries/shelters, but when working animals are being treated, it is sadly unavoidable.

Our days flew by at Animal Aid. How could they not when we just loved dogs, cows, donkeys, and goats all day?

VOLUNTEERING
There is no cost to volunteer at Animal Aid. We stayed at a guesthouse in town and arranged with a rickshaw driver to drop us off and pick us up everyday for 350 rupees return.

We worked from 9-5. There are 2 different samosa/thali canteens about 10 minute walk from the shelter for lunch. 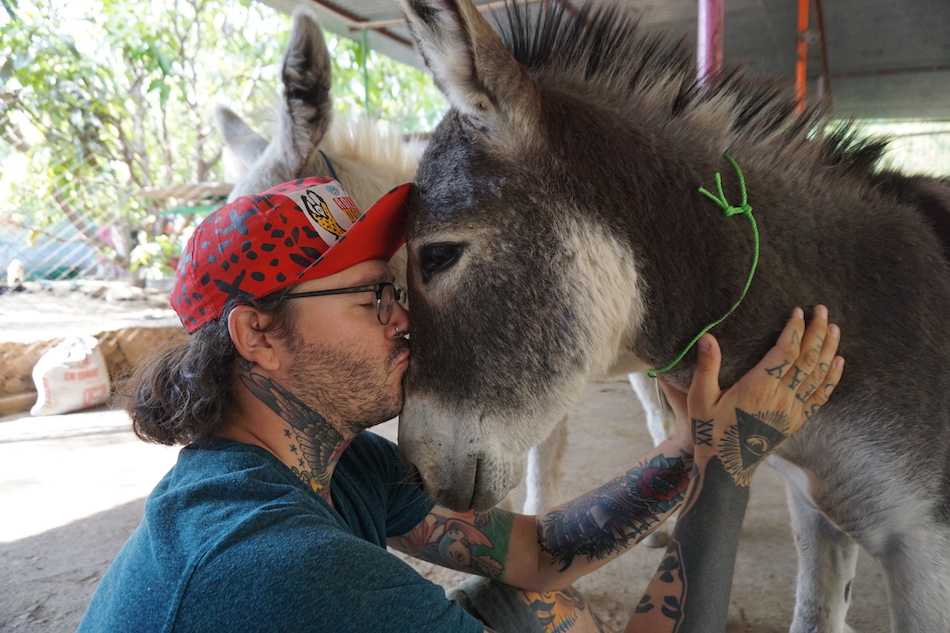 If you are visiting India, visiting Animal Aid should be on your itinerary. Our time spent there was incredibly rewarding, and touching.

For more information on all that they do please visit their website AA Unlimited India.