An oasis for veggie-lovers in Cà Mau 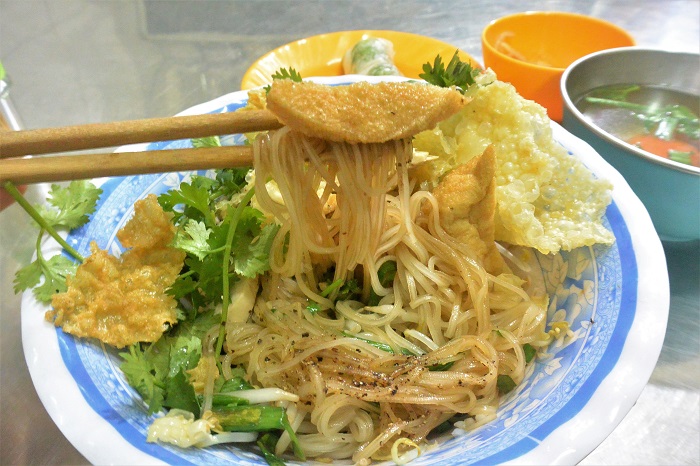 An Lạc Vegetarian Restaurant is only quiet between 2pm and 5pm because that’s a time when everyone has a rest. Over the course of the rest of the day, the tiny outlet bursts at the seams. Countless people come in and out all day every day, dining-in or taking-away. The two chefs work non-stop, as do all the other staff.

An Lạc was not fancy at all, with seating for about 30, but it was a genuine oasis for hungry vegan tummies, serving options from rice to noodles together with plant-based drinks.

I chanced upon this little gem while searching for a vegan version of the iconic bánh tằm cà ri cay (spicy curry-based thick rice noodles), a must-try delight whenever you’re in the Mekong Delta’s Cà Mau Province.

With the menu not having the dish I was seeking, the owner, Nguyễn Thị Thúy Lĩnh, suggested another variation of bánh tằm, which is one of their most popular dishes.

Unlike the typical southern bánh tằm eaten with thick rice noodles, herbs, non-veggie toppings, and creamy coconut milk, the dish An Lạc serves contained a layer of rice noodles and some pieces of vegan meatballs and fried spring rolls on a bed of greens. They were garnished with crunchy vegan toppings and coated in an appetising tomato sauce, which reminded me of spaghetti. It was called bánh tằm xíu mại cay, or spicy thick rice noodles with meatballs (VNĐ22,000).

The noodles were not as thick as other bánh tằm I had tried before, but were chewy enough to not break into pieces in the sauce. Despite being somewhat on the sour side, the sauce offered an authentic sweetness that is different from other southern dishes.

The star for me was the vegan meatballs: soft, moist, and balanced in texture and flavour. It was like enjoying a spring symphony, thanks to the harmonious combination of rich tofu and crunchy noodles and wood ear mushrooms. But what I admired most was the way the vegan meatballs held together in the sauce, which isn’t always the case.

According to Lĩnh, the recipes at An Lạc were created and passed down to her by her father, who opened the restaurant 30 years ago and was himself a vegan. The whole family then adopted the lifestyle and has run the restaurant ever since.

“I kept my father’s original recipes,” Lĩnh said, adding that all the ingredients are home-made, from the tofu to the vegan sausages. “This helps us be more independent in our food sourcing.”

When I mentioned the sweetness of the bánh tằm, she explained they did not use any sugar or artificial sweeteners in their dishes. Instead, they stew vegetables for hours to get the fresh sweetness and authentic flavour for broths and sauces.

On the morning I was to visit Cape Cà Mau, the southernmost point of Việt Nam, I asked Lĩnh what I could pack for lunch and she recommended cơm tấm (broken rice). Despite not being a big fan of rice, I went with my gut, so to speak, and ordered a portion (VNĐ20,000).

All of the original non-veggie elements were replaced by vegan alternatives. Soy sausage substituted grilled pork chops and was cooked beautifully. Its texture was just right: crispy on the outside and tender and chewy on the inside.

Meanwhile, shredded pork skin became deep-fried crunchy vermicelli, which creates a crackling sound when eaten. The steamed rice was not too damp, not too dry. Pickles and a sweet and sour sauce balanced out the flavour, reducing the saltiness and fattiness of the grilled and fried elements. The steamed egg custard was missing, but it didn’t lessen the tastiness.

An Lạc’s cơm tấm has changed my mind about rice dishes. I’ve told myself I should try more varieties of this dish on subsequent travels to the south.

Hủ tiếu khô (VNĐ20,000), which is a mixed rice noodles dish with deep-fried tofu, crackling tofu skin, and herbs, also deserves a try. Its best feature is the special sauce made from soy sauce.

The chef seasoned everything beautifully to ensure a balance between sweetness, sourness, and saltiness. My favourite drink, meanwhile, there was the nutty sữa mè đen (black sesame milk) (VNĐ12,000).

I quickly became a frequent customer during my three-day stay in Cà Mau.

Lĩnh was right that I need to stay for at least 10 days to try every dish at An Lạc. I wish I could have stayed longer and gotten to know more about her and her restaurant. She’s run the business for many years now and has a staff of 10 or so. When she isn’t in the kitchen, she walks around chatting with customers.

“Conversations with Lĩnh are fun and sincere, just like her food,” said one elderly lady sitting opposite me on my last visit and who has been a loyal customer from day one. Her favourite dish is hủ tiếu nước (rice noodle soup), but it was primarily the welcoming environment that made her come back.

Veganism has become a fun part of my life and my travels over the last five years. It’s not about what you put in your tummy, but the enjoyment of exploring various versions of vegan food and meeting people in different places. And you will never be let down as long as places like An Lạc exist. – VNS

The original post is on here. It is published here on Vietnam News.

Visit Minh on the move for more travel posts and vegan eats.