Back in November 2017, we spent a really enjoyable few days in Amritsar. Not only did we enjoy the sights that the town has to offer (including the mesmerizing Golden Temple and the dramatic border ceremony) but we also got to eat some really tasty food. However, as we quickly found, being vegan in the state of Punjab is not plain sailing.

The state of Punjab is one of the highest dairy producers in India. To give a little context to this, India is the largest producer of dairy in the world. Because of this, a lot of their dishes contain some kind of dairy, either in the form of milk, cream, curd (yoghurt) or, more often than not, in the form of butter or ghee. This makes eating vegan here a tad tricky, but definitely not impossible. 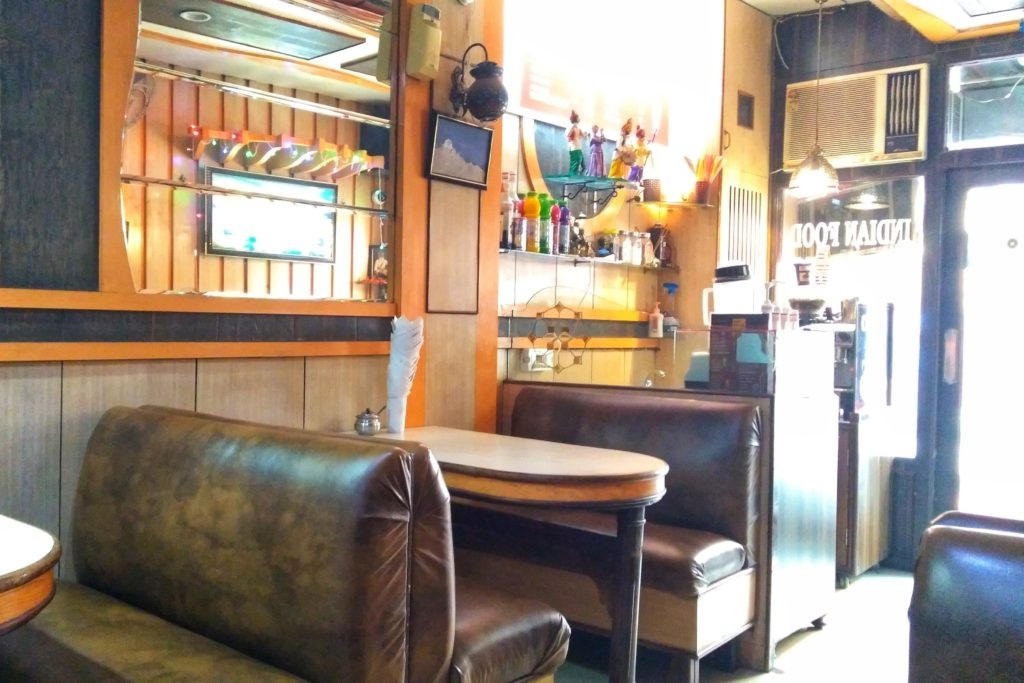 Love the old school interior of Neelam’s restaurant in Amritsar. Got a banging breakfast here as well.

I absolutely love the fact that we get to eat curry, in some form or other, pretty much every day and for most meals. So I’ve been loving the fact that a lot of places we’ve been to serve up some kind of bread and curry for breakfast (for example the puri baji we had in Manali). So when I read that they love their kulcha (a stuffed bread) in Amritsar I was pretty excited. Unfortunately this excitement was short lived. 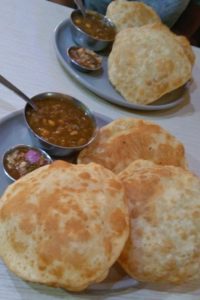 On our first morning, we went to a nearby restaurant, ordered a kulcha and did our best to say “no butter”. As soon as the waiter left we had a feeling that this was not going to be our breakfast as he looked very confused. Sure enough, back he came with a small pot of very tasty curry with a kulcha by it. The kulcha had one of the biggest blobs of butter I’ve seen in a long time sitting on top of it and had even been fried in butter. Breakfast fail!

Not to worry though, there were plenty of other places to eat and so off we went over the next few mornings in search of a vegan breakfast. Turns out, the buttery kulcha is the morning food of choice for nearly everyone. Neelam’s restaurant to the rescue! In this smallish old school restaurant we managed to grab a booth and order a chana puri (chickpea curry and puris) and they were clear that they could cook everything in oil instead of butter. To top it all off, it was really tasty as well. Crisis averted (crisis of being hungry for a few hours before lunch) and all was well with Amritsar again.

Things get much better once the breakfast service has finished and everyone concentrates on what they are going to eat for lunch (I say this, but I’m not sure everyone spends as much time thinking about food as we do!). There are a few decent places around to grab a good lunch but by far and away the best and easiest is at Amritsar’s Golden Temple. 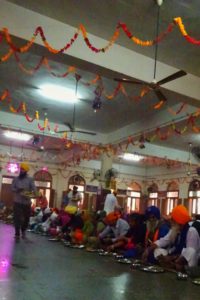 Inside the kitchen at the Golden Temple where everyone sits in rows and eats together. Magic.

We loved the Golden Temple. The sights, sounds, people and atmosphere was just great. I can see why people spend hours just sitting and staring. One thing that was amazing was the free kitchen there. Every day, up to a hundred thousand people, from the very poor to the very rich, queue up to sit together on the floors in big halls and eat some scrumptious, free food. The generosity of the Sikh religion is really wonderful and heartwarming. (note: you can, and probably should if you can afford to, donate some money at a counter in the Golden Temple area which goes towards the food).

The queue in itself is quite fun as you are surrounded by hundreds of people who have all collected their metal thali plates, bowls, cups and cutlery and are funnelled into areas to wait for a sitting to exit one of the eating areas. As soon as the rope is raised, we all moved forward as one to sit in long rows as servers came round with different curries and breads for our plates. It all tasted amazing.

In the queue I was stopped by a young Indian guy who told me I was very handsome! He and his friends then chatted to us about our lives and travels and sat with us in the hall, helping us with what we could and couldn’t eat (turns out it was quite easy as everything was cooked in oil and the one thing that had yogurt in was white, but still, they were very friendly). This made the experience even more enjoyable (I knew these looks would come in handy one day). After eating they even took our plates away for us before joining us outside for a photo with them. A very decent vegan feed. Get involved if you’re there.

I’ll give a shout out to the restaurant Bharawan da dhaba as well. We had a very nice Masala Dosa there one lunchtime at a pretty reasonable price (110 rupees). It’s a big old place with plastic chairs and tables. The service is quick, and the food is tasty. 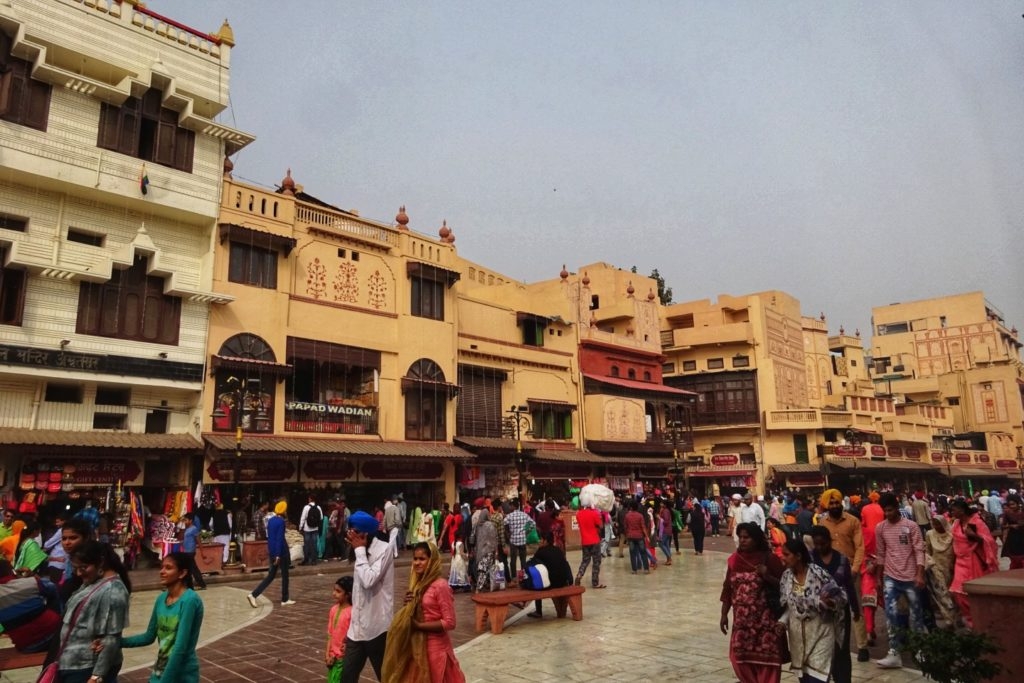 This is just a picture of a part of the main promenade in Amritsar. The contrast of the sandy coloured buildings and the colourful clothes everyone wears is beautiful. We could sit and people watch this for hours.

We had some decent dinners in Amritsar. Not amazing, but decent, and vegan. So you can’t ask for more than that! On our first night we went to D.S. Restaurant as it was recommended on the ever helpful vegan/vegetarian food app ‘Happy Cow’. The food itself was very nice (we had our standard dal fry and aloo gobi). However, the service was a bit weird. After being very keen that we enter their restaurant as we were walking past they seemed to be in a phenomenal hurry to get us out again (we were the only ones in there). To the point where we had got the bill before we’d even finished eating (and I’m not a slow eater). But that wasn’t the weird thing I took away from this place. What was odd was the waiter who stood there very close and watched us eat for the entire meal, no chatting involved. Every time it looked like our dal bowls were low he would serve us up some more from the larger dal bowl on our table. Same with all our other food. The whole experience was a little too strange for our liking and we didn’t return.

The next day, after a long old afternoon and evening at the border ceremony (see the thumbnail of this post to get a bit of a feel for the kind of party atmosphere you get at this ceremony), we returned to town tired, hungry like the wolf, and keen not to be stared at again for an entire meal. So what better place to do that, than at McDonald’s! The McDonald’s in Amritsar is all vegetarian, which is a good start, and there’s not actually that many McDonald’s in India (unlike back in the UK where at one point we were living within a two minute walk of two 24 hour ones). So we figured we’d give it a go. Back when I was a carnist I absolutely loved a BigMac meal with extra hamburger (and I miss it every day!), so I was pretty excited to get that MaccyD’s taste back. We ordered a McAloo burger (with no cheese or mayo) and a McVeggie burger (also with no cheese or mayo) and some french fries. They were very tasty, all salty and McDonald’s tasting…mmm. So good were they, and so hungry were we, that we ordered another round. 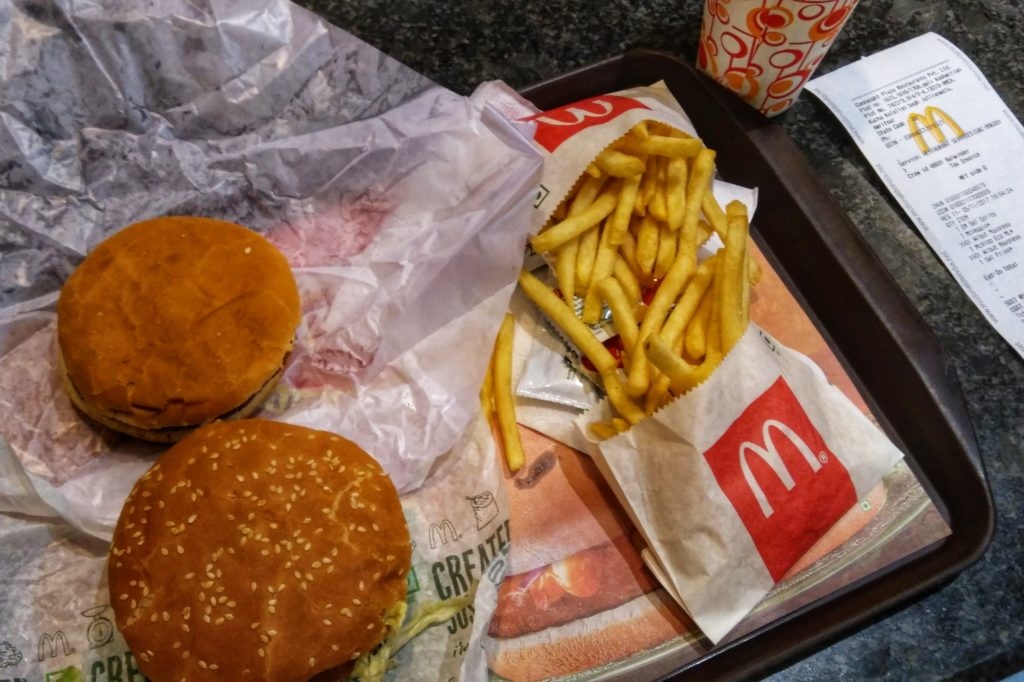 Now a vegan McDonald’s may not appeal to every vegan. A lot of people don’t eat there due to the fact that McDonald’s is clearly not a very vegan company, responsible for the slaughter of millions of cows and chickens. But, all over the world more vegan options are popping up in their stores meaning vegans like myself who miss that kind of food and flavour can satisfy our cravings. But, if it’s not for you then you can always go back and get a free dinner at the Golden Temple kitchen (yep they serve dinner as well!) or Neelam’s offer up a pretty decent vegan dinner as well (their jeera aloo is immense – potatoes fried in oil and cumin…wowsers).

All in all, although it was a bit tricky at first, there are plenty of options for vegan eating (especially if you don’t mind being intensely watched!)