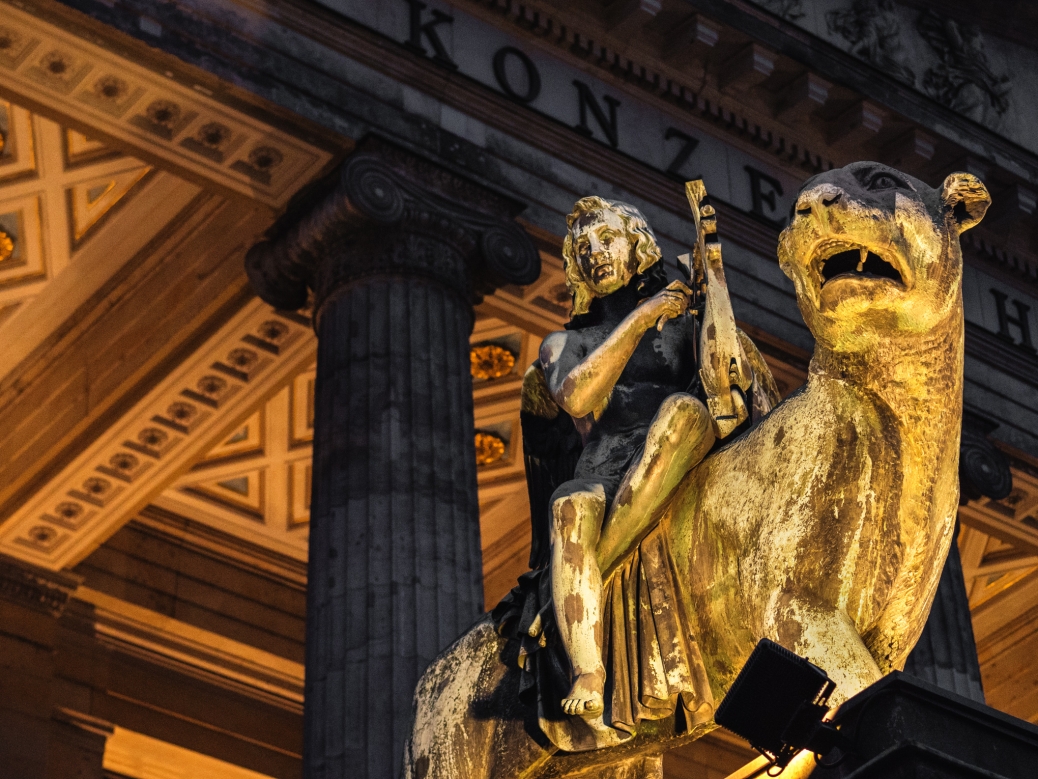 Upon returning from a recent trip to Berlin we looked forward to writing a blog post about this thought-provoking city and our vegan culinary adventures. Alas, it was mid-March, and within a few days our world had changed drastically – the coronavirus wreaked havoc everywhere. We were apprehensive about sharing our delicious dining experiences during this strange and difficult time. And yet, there is no better time to talk about veganism, a way of life that not only abstains from exploiting and killing fellow beings but also focuses on culinary pleasure, the environment, and health. Thus, now more than ever we need to connect the dots between the prevalent carnivorous culture, and the coronavirus.

We don’t take lightly what many of us experience in these times, but sharing pleasurable memories and reflections maybe what we need. So back to Berlin – this city is a vegan heaven, with about 80,000 vegans, out of roughly 3.75 million people. It’s not surprising that it boasts a wide range of great vegan restaurants, cafés, a donut chain, ice cream parlors, and a wonderful grocery store chain, with an irresistible selection of chocolates and cheeses.

On our first evening, we headed to Kopps, a fine-dining vegan restaurant in the Mitte district. While waiting for our food we were served a surprise, complimentary, amuse-bouche, made with tangerine gel and candied peel, fermented pumpkin seeds, and pomegranate – what a delicacy. We knew we were off to a great dinner! 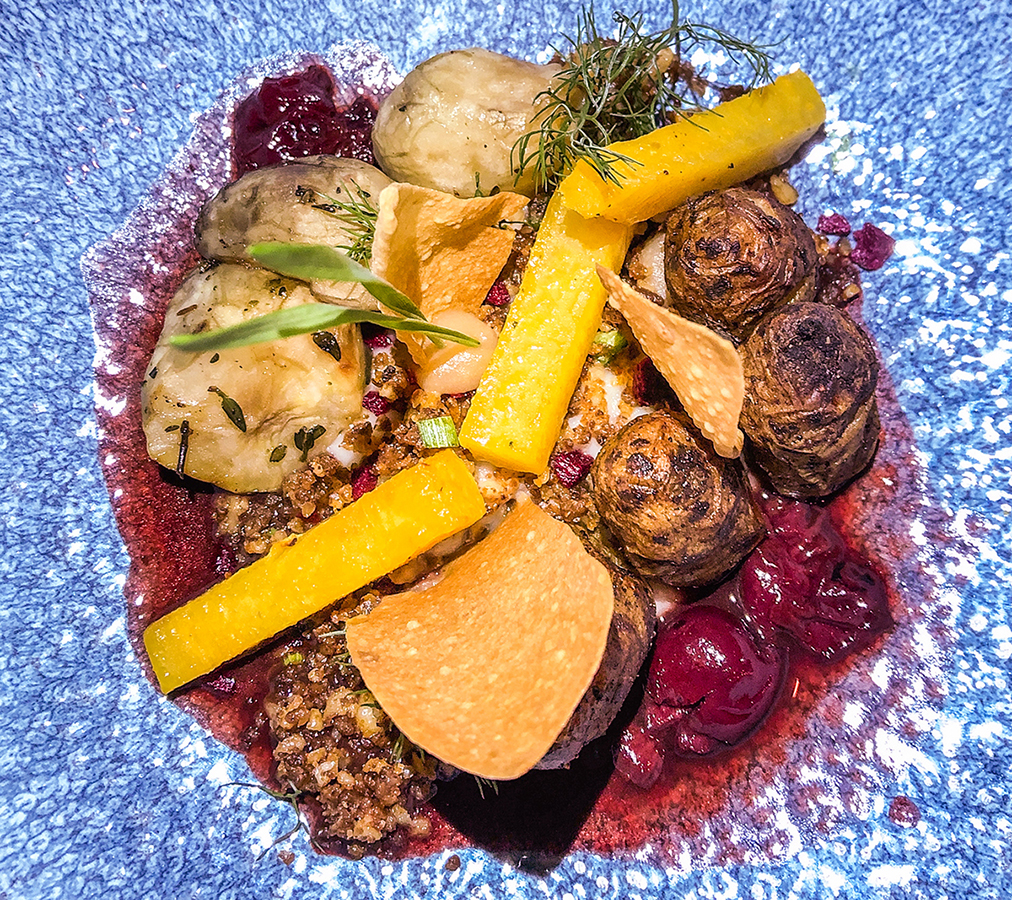 For an appetizer, we shared the delicious ‘egg’ salad, made from chopped pasta, a plant-based mayo, and sulfuric herbs. Guess what, its taste, smell, and texture were exactly like eggs! For main dishes we savored the Jerusalem artichoke, baked and served with turnip, chervil root, lentil chips, quince, sour cherries, walnuts and pumpernickel, and the Brussels sprouts with pretzel dumplings, turnips, plums, amaranth, soy, carefully dotted with mushroom foam. We were wowed at the eclectic and marvelous flavors and the feast for the eyes. Our dessert, poached pear dolloped with vanilla, chocolate, and almond sauce, was to die for. And with our coffees, we were served complimentary chocolate truffles. All in all, a vegan indulgence indeed!

Another awesome vegan restaurant we visited was Good Morning Vietnam, which is tucked away in a courtyard on vibrant Bergmannstrasse. We had such a wonderful lunch – the food, service, and atmosphere were so terrific that we decided to return later for dinner. 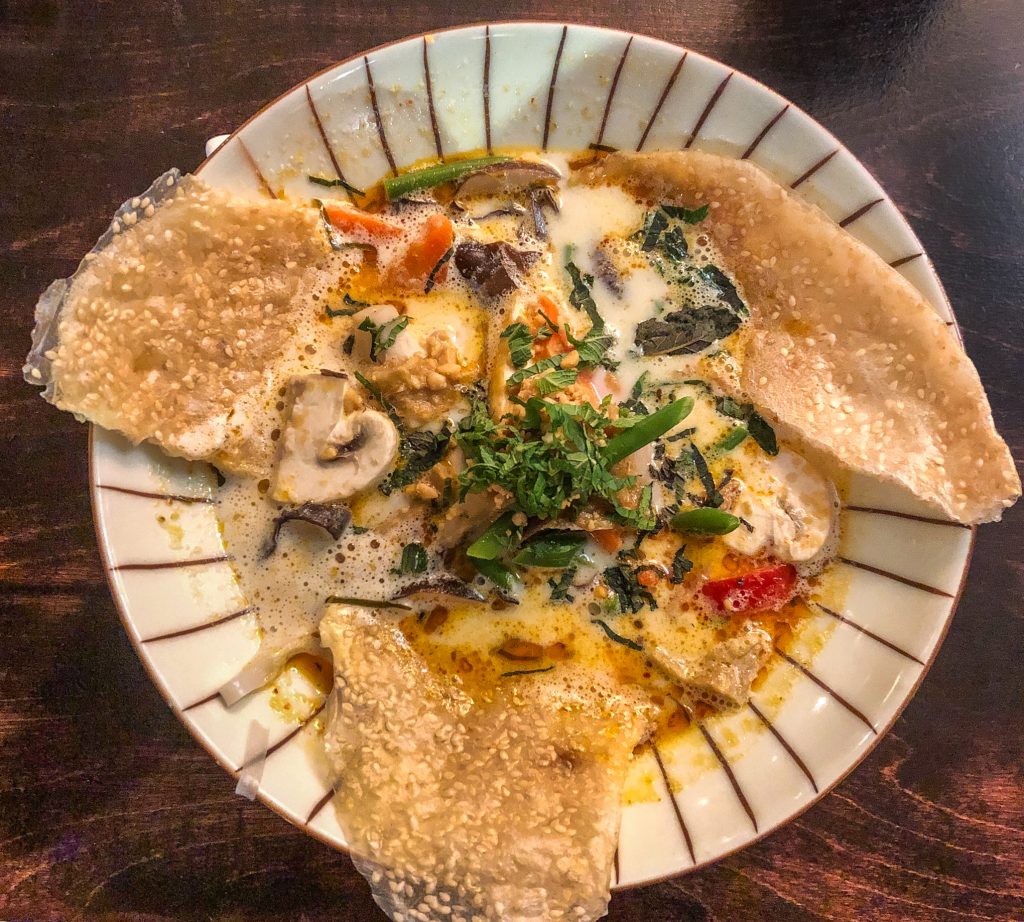 Among other dishes, we had their Mì Quang, a fabulous bowl of rice noodle soup with tofu, mushrooms, lemongrass, coconut milk, mint, garnished with peanuts and toasted sesame rice crackers. We loved the interesting and complex flavors of this dish. We also tried one of their vegan ‘duck’ dishes. The name ‘duck’ is off-putting for us, but our friendly waiter highly recommended it, and we had no regrets. It’s made of thinly sliced Seitan, coated in sesame seeds and served with vegetables and rice, and dressed in coconut-peanut sauce – absolutely fantastic. This restaurant is a gem! 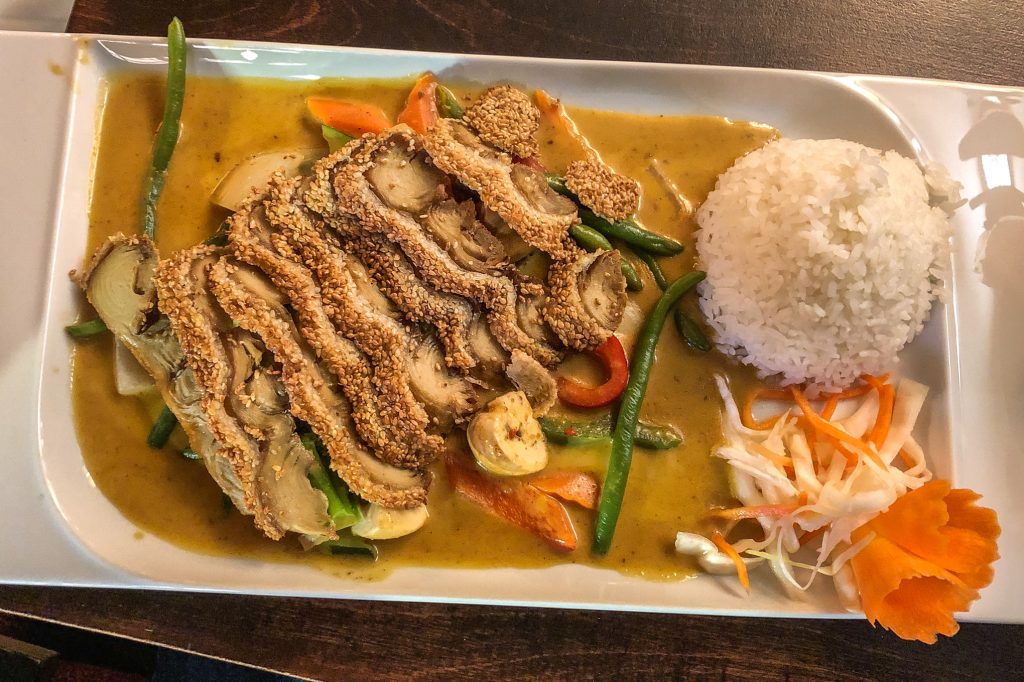 For breakfast, we had to resort to non-vegan cafés, as there weren’t any vegan ones near our hotel. But don’t you worry, all of them offered nice plant-based options. Father Carpenter, is a café hidden in the corner of a lovely courtyard. We enjoyed their banana bread with whipped peanut butter and raspberry-chia jam, and an oat porridge with stewed green apples, cinnamon, maple syrup and blueberry compote – an unexpected yummy twist on oatmeal. Both dishes helped us survive the miles and miles of walking that day, which as you might guess, made us look forward to dinner… 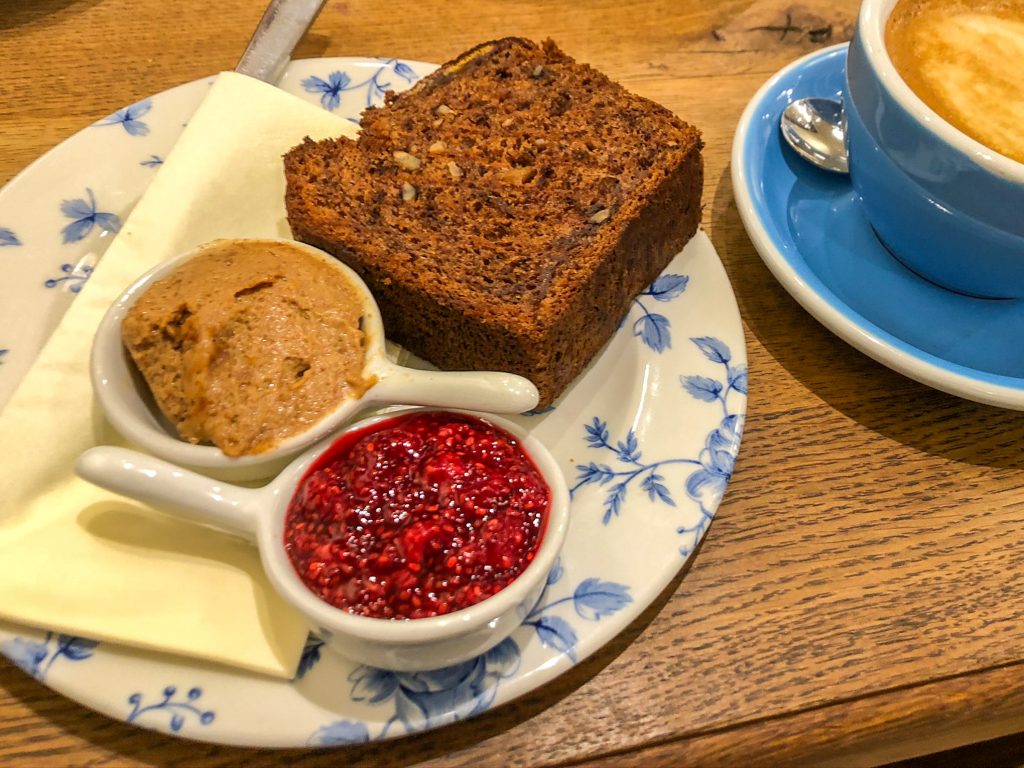 The list of restaurants and dishes we’d love to talk about is too long, so we’ll mention a few briefly. The delicious avocado sandwich breakfasts at Oliv, the amazing vegan Japanese fare at the Secret Garden, so tasty and beautifully served, and the vegan pizza at Zeus Pizzeria. And last but not least, the fantastic Quy Nguyen Vegan Living, with its exotic delicacies, not to mention the interesting people whom we met while dining there. The conversations with them is another topic for a blog post… 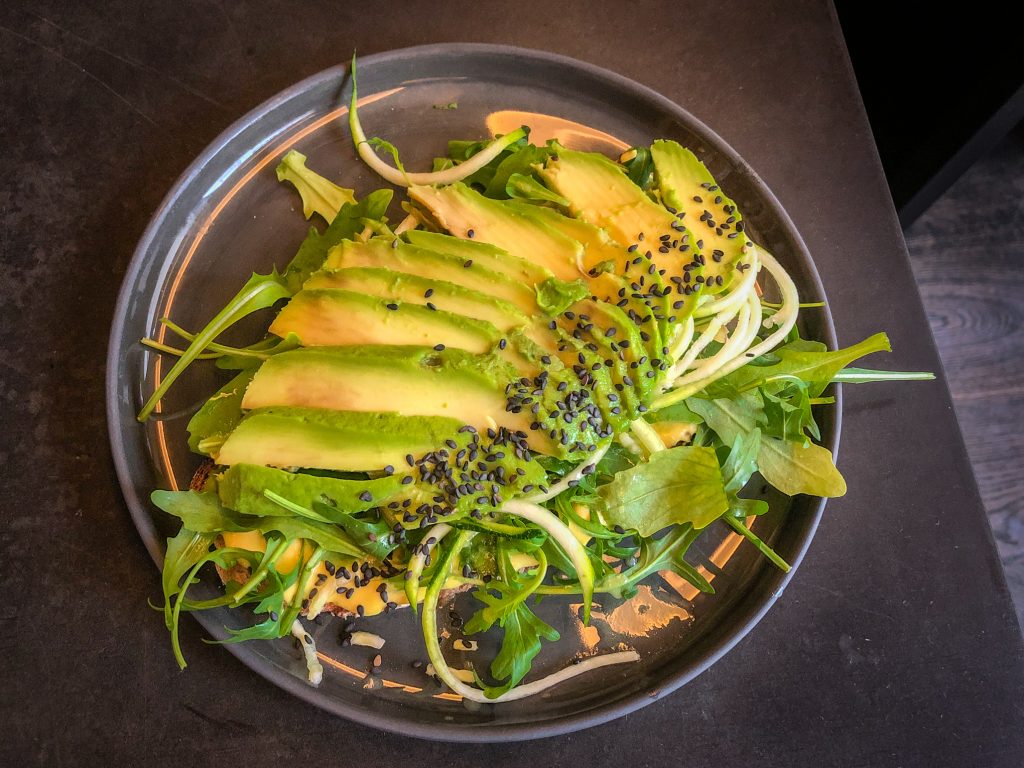 Despite the fun time we had in this fascinating, progressive and vibrant city, we could not overlook Berlin’s dark past. Tens of thousands of Jews, who once lived in this city, were murdered by the Nazis during the late 1930’s to early 1940s. Yet, the majority of the non-Jewish population was oblivious to their disappearance and murder. As Ian Kershaw, a British historian, wrote: “The road to Auschwitz was built by hate, but paved with indifference.”

Going through Berlin and thinking about the blindness to the suffering of ‘others’, was a stark reminder of our current culture. We humans, torture and brutally kill tens of billions of fellow-creatures, every year, only to satisfy our taste buds. Take for example the chickens in the egg industry. All newborn male chicks, 7 billion every year, are ground up alive in industrial grinders, gassed, or suffocated slowly in plastic bags. Eggs labeled as ‘organic’, ‘free-range’, and ‘humane’, and chicks sold to backyard chicken keepers, all originate from the same barbaric killing hatcheries.

The female chickens who lay eggs (including ‘organic’ and ‘humane’), spend their lives crammed in wire cages too small to even spread a wing. ‘Free-range’ merely requires that the hen has access to a screened-in porch with cement, and she may never be outside. The intense confinement causes behavioral problems such as rubbing her breast against the metal wire until it is bald and bleeding, and pecking and cannibalizing her cage mates. The hens’ beaks are cut off when they’re 5 to 10 days old, using a heated (650-750°C) guillotine-type blade that cuts the sensitive beak tissue. The hens lay too many eggs, 500 eggs annually, compared to hens in the wild who lay only 20 per year. They’re short, miserable lives end in agony, typically at the young age of 2 years, when they’re gassed with CO2, then dumped (which tells us we’ve learned lessons from the holocaust, albeit the wrong ones…). It’s the most heartbreaking life of any animal on this planet, and all for the eggs you thoughtlessly consume. To read more about the standard procedures of raising other farmed animals such as pigs, dairy cows, and chickens, please read here.

This larger than ever holocaust is happening under our noses, and shockingly, most people turn a blind eye. Not only are we following habits instilled in childhood, customs that were never guided by morals or ethical concerns, but we actively contribute to the bloodbath in our daily lives, by consuming animals’ flesh, milk, and eggs.

Our violence towards innocent, defenseless beings, have unintended yet dire consequences, the coronavirus to name one. According to a UN report, 75% of all emerging infectious diseases in humans originated in nonhuman animals, both wild and farmed species. Exhibit number one, COVID-19, as well as Ebola, HIV, SARS, H1N1, MARS, and Zika.

Humans have caused the spread of deadly viruses, through the conversion of wildlife habitats to croplands used to feed farmed animals, and through the exploitation of wild species. According to a UN science panel, 100 million hectares of tropical forest were converted into agricultural land from 1980 to 2000 alone. The same source reports that more than a third of the world’s land surface and nearly 75% of freshwater resources are now devoted to farmed animals and crops to feed them.

The irony is that because of human encroachment, mainly due to animal agriculture, wild species live in a smaller territory, increasing the chances that they’ll come into contact with humans. This allows their germs to cross over into our bodies, and become even more dangerous for us. “We disrupt their ecosystems, hunt them, build houses next to them, grow livestock right next to their populations…,” said Dr. Peter Daszak, a professor at Columbia University and president of the EcoHealth Alliance. “We allow the viruses they carry, that we’ve never been exposed to in our history, to emerge into our own populations.”

More terrifying is the fact that the animals who’re raised for food, either for meat, dairy, or eggs, are a major source of deadly pandemics. The vast majority of them are crammed into extremely small spaces, where they serve as an epidemiological bridge between wildlife and human infections, and their germs transform into deadly pathogens. For instance, Avian influenza viruses, which infected chickens in factory farms, mutated into highly pathogenic forms, and have crossed the species barrier to infect humans. One strain, H5N1, which can infect humans, has a mortality rate of about 60%.

Scientists tell us that humans’ appetite for meat and the resulted shrinking habitat will lead to more COVID-19 like pathogens. So for a moment, let’s stop talking about masks and social distancing, and think about how to prevent the next one. There is only one concrete action we, as individuals, can take to minimize the emergence of new virulent germs. We should stop contributing to human interaction with wild and farmed animals by switching to a plant-based diet. Such a step would cut the use of land by 76% (not to mention it would halve the greenhouse gasses), and result in much less interaction with wildlife, let alone, farmed animals.

You may not have direct control over what the government, corporations, and other individuals are doing, but you do have control over your body and what you put in your mouth. You may think it’s a small step, but it’s an easy one that any of us can take. Together we can bring about a new way of life which will help stop future pandemics, save the environment, and improve your health.

Our trip to Berlin was eye-opening on many levels. We were haunted by the city’s history and pondered its relevance to our contemporary culture, the one that allows us to ignore the suffering of others. Now that you have time to contemplate, please have empathy for those who’re victimized for your culinary pleasure. Know that stopping the consumption of meat and animal products will save not only our fellow earthlings but prevent future diseases. It’s going to be a new world, take responsibility in shaping it for the better. Go vegan.

Eating animals will be the death of us

How to prevent outbreaks of zoonotic diseases like COVID-19

Is factory farming to blame for coronavirus?

Think Exotic Animals Are to Blame for the Coronavirus? Think Again.

Our Growing Food Demands Will Lead to More Corona-like Viruses