For the Love of Animals – Leilani Farm Sanctuary 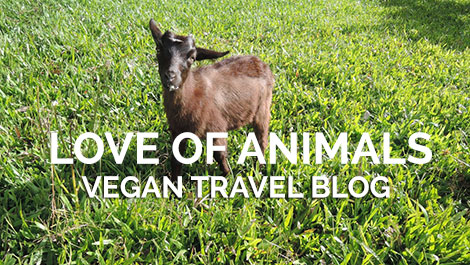 Let me start off saying, that visiting Leilani Farm Sanctuary was one of the highlights of my 2-week trip to Maui. When I first heard of this sanctuary a few years ago, I thought, ‘it’s on an island, how many animals could there be?’ It turns out, a lot. Although the Hawaiian islands are in the middle of the ocean, unfortunately the animal agriculture industry is alive and thriving, and hunting for deer and boar is quite popular as well. There are feral cat colonies that need caring for, and children are gifted rabbits, guinea pigs, and chickens, only to abandon them later.

I was so pleasantly surprised by Leilani Farm Sanctuary. I was expecting to walk in to your run of the mill sanctuary, but instead the whole experience was just so personal and animal-friendly. We went for one of the sanctuary’s tour days, and joined 20-something other people on a tour of the 8-acre sanctuary. The very first thing you see coming in is a sign that says ‘vegan’, and you get to meet some of the sanctuary’s residents on the 1-2 minute walk to the beginning of the tour. While signing in, we were greeted by so many friendly cats, as well as a couple of deer, a pig, and a tortoise. 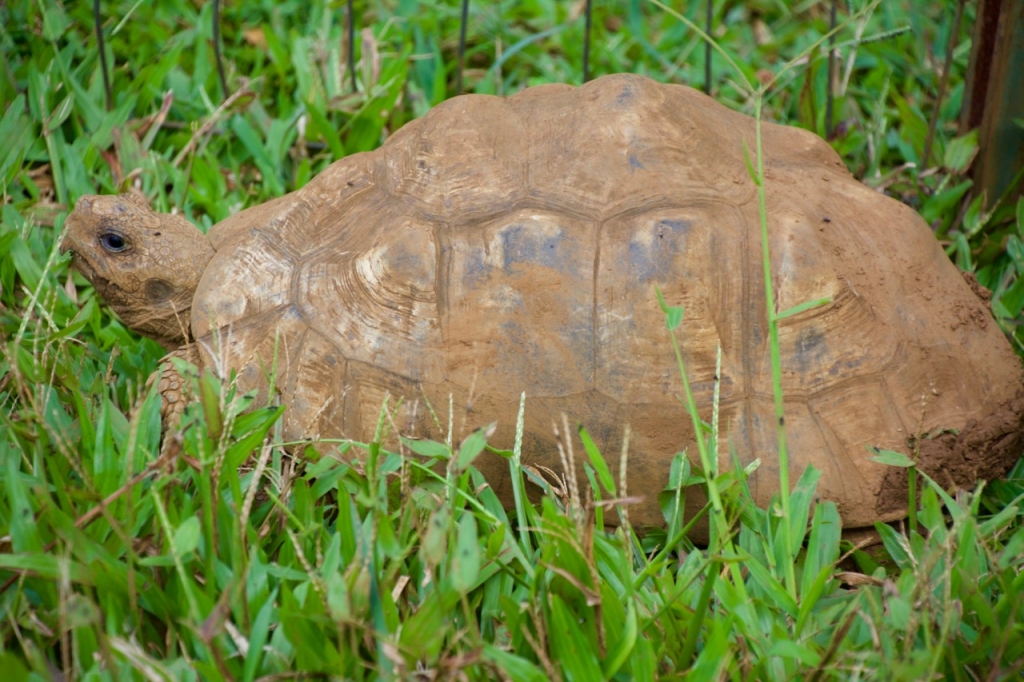 Laurelee Blanchard, the founder of Leilani Farm Sanctuary, started off the tour by introducing herself, and telling us about how she ended up in Maui and why she started the sanctuary. You can really tell how strongly she felt when she realized what was happening to the animals she was consuming before she became vegan, and how passionate she is for all animals, especially the ones she has rescued.

We were then given a brief introduction to who can call the sanctuary home: Cats, a dog, chickens, roosters, geese, turkeys, ducks, pigs, donkeys, tortoises, guinea pigs, sheep, rabbits, goats, 2 deer, and a cow. And we got to meet all of them! 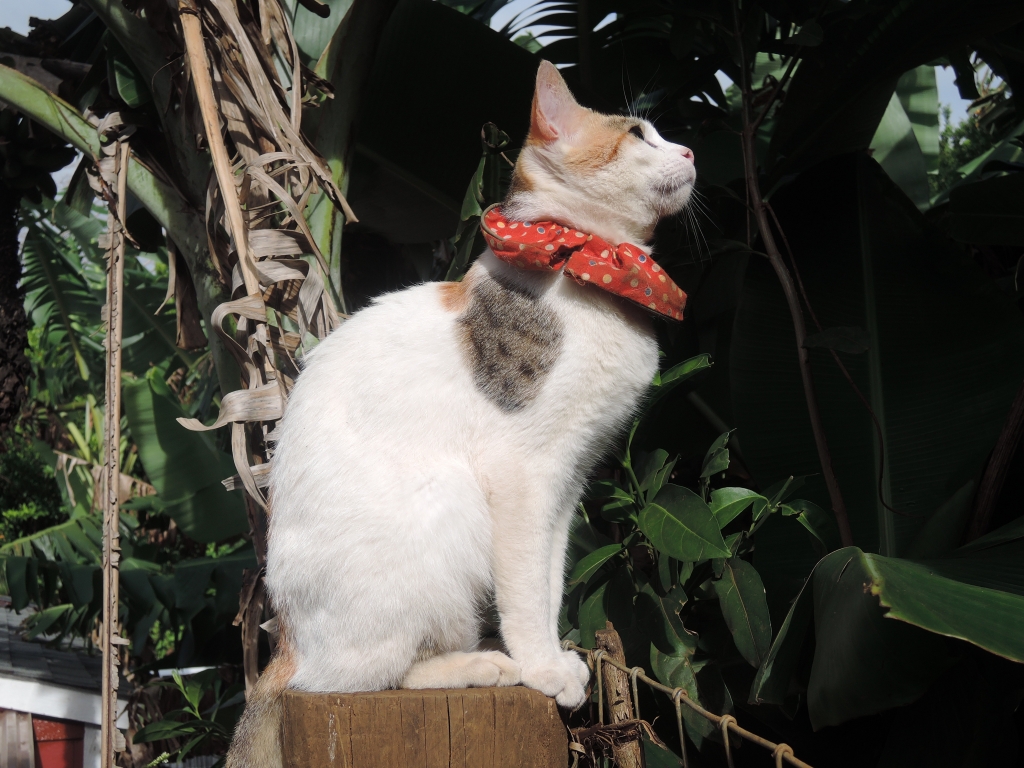 Well, except for all of the cats and chickens. There are 36 cats and a whole lot of chickens at the sanctuary!! 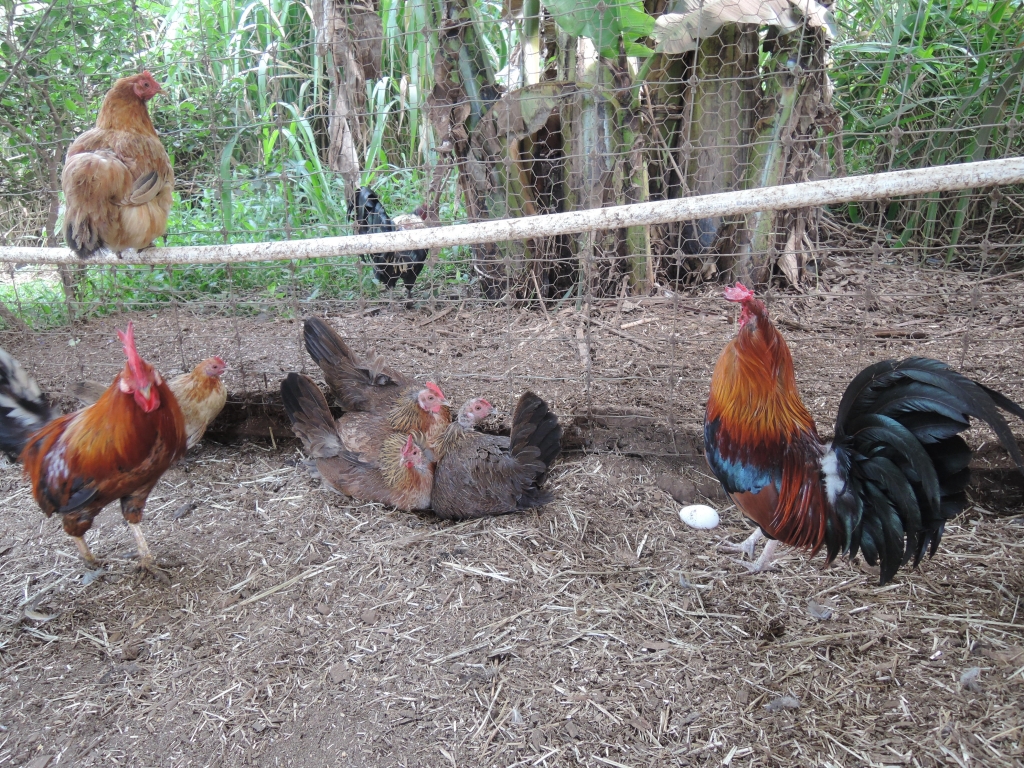 The chickens were originally left to roam wildly where they wanted, but they kept leaving their eggs all over the place, enabling the roosters to fertilize them (which was quite counterproductive to the cause of the sanctuary!), so they were moved into an enclosure to better be able to collect the eggs. 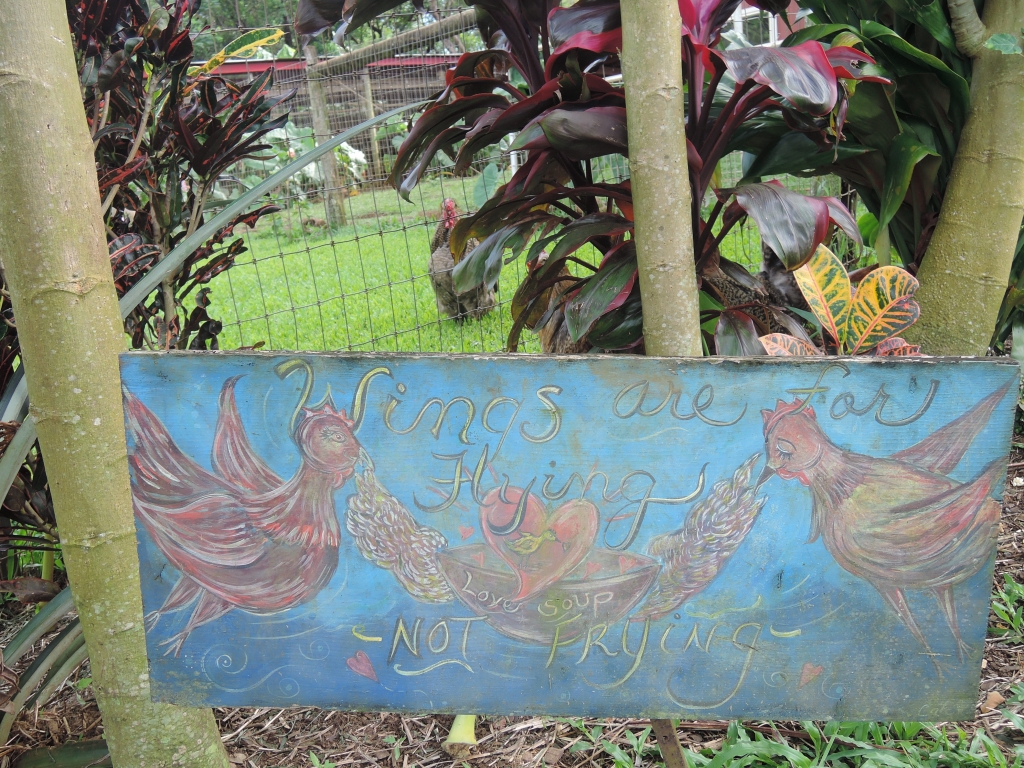 Veganism and compassion is displayed during the entire time at the sanctuary. There are signs with vegan messages all over the place, such as the above, ‘Wings are for flying, not frying’. Laurelee explains how each animal (or animal group) came to be at the sanctuary, talks about the issues the animals go through, and then we got to hang out with the animals. This is no petting zoo though; the animals are respected, and if they’re not interested in interacting, they don’t have to. This was especially true with the deer, who got a bit agitated with one child for being too friendly with them. They are very friendly, but they are still wild animals. 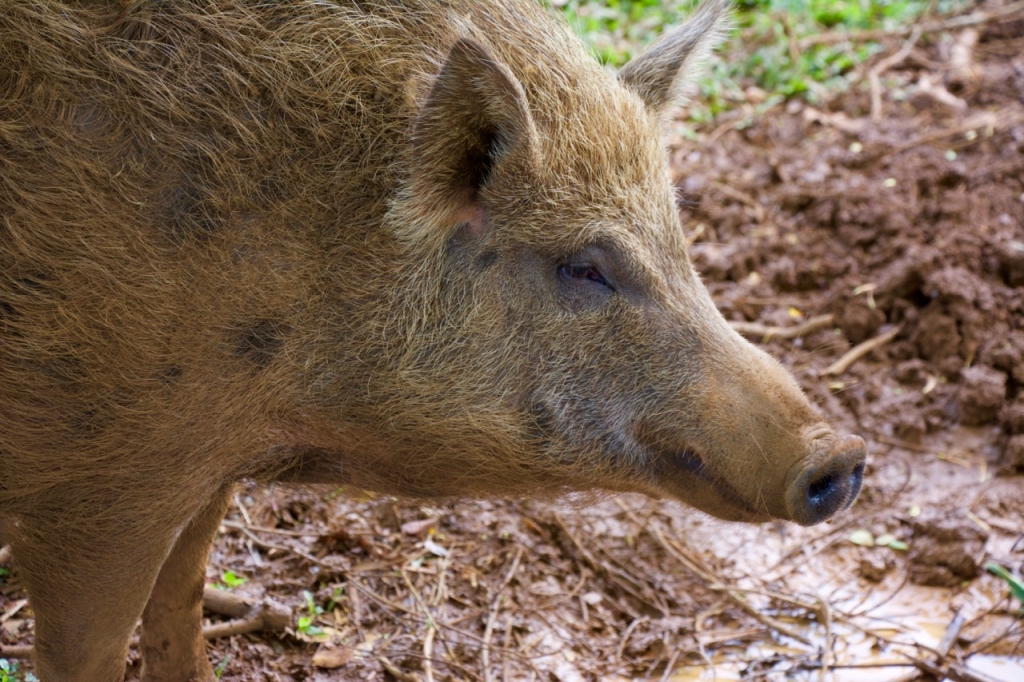 Bernie wandered into the sanctuary as a wild boar, and liked it so much that he just stayed. 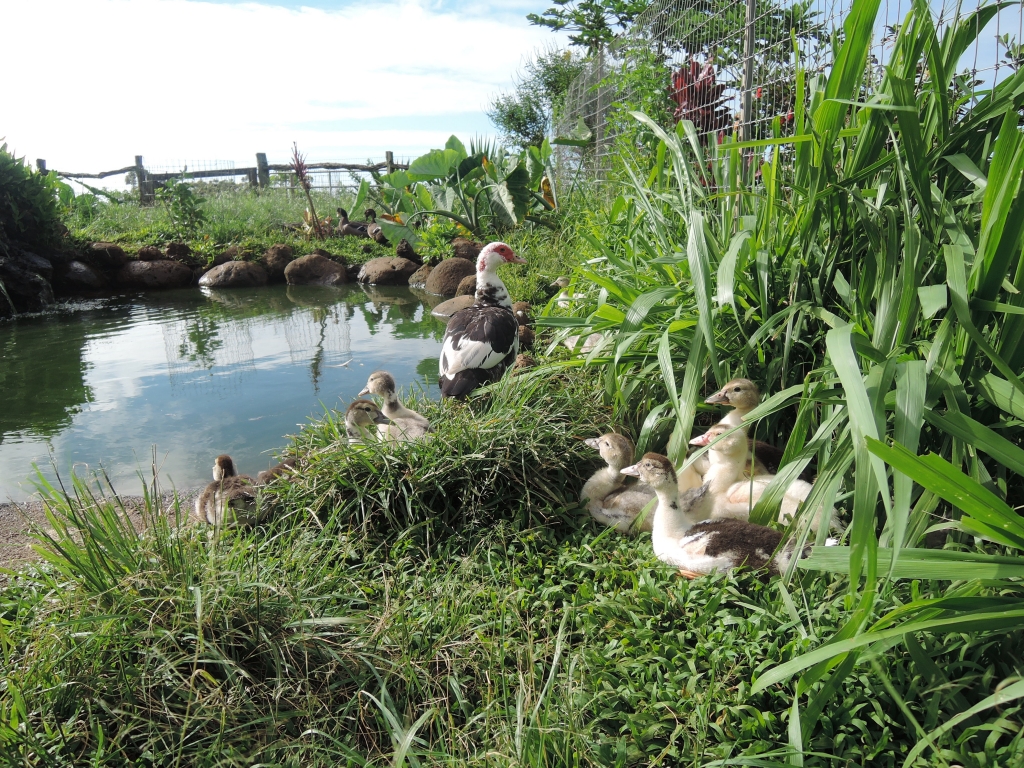 The ducks live happily in their own pond, and share their area with geese and George, who was fed to be so fat at his previous ‘home’ that his eyes bonded shut, and was blind for 6 years. When he arrived at Leilani Farm Sanctuary, he was put on a diet and lost his excess weight, but he remained blind. He was given the gift of sight by National Geographic, who was doing a show on vet clinics and surgeries, and offered to fund George’s surgery after finding out about the sanctuary from the vet. Happily, George can see again! 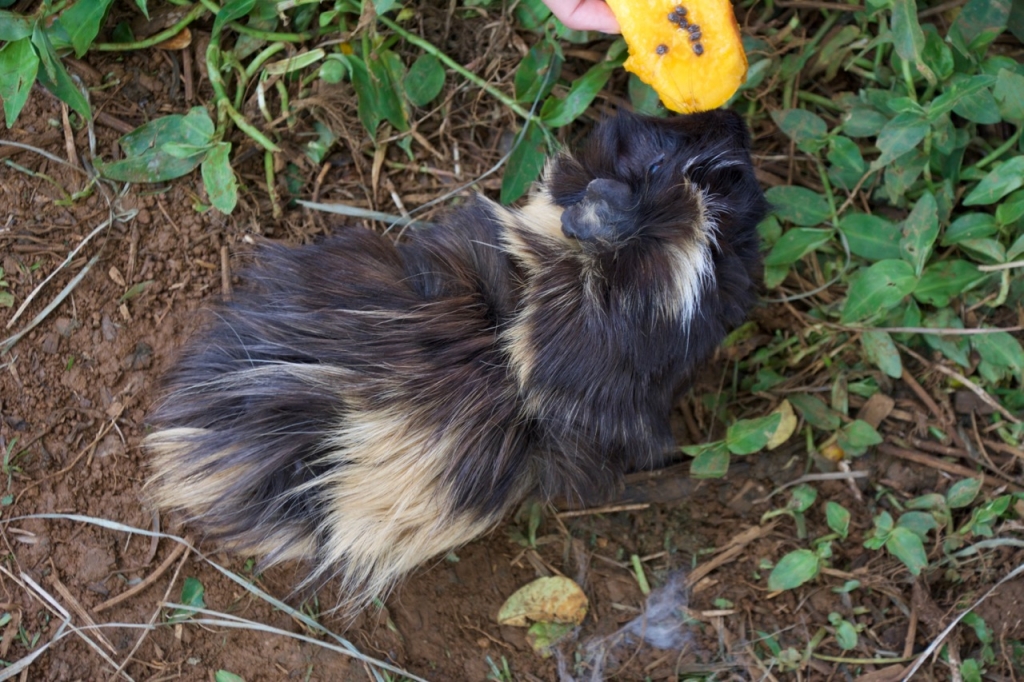 Because there are no birds of prey in Hawaii, the guinea pigs and rabbits can live outside all day in peace. I have never been able to see guinea pigs and rabbits with so much space and so many friends, as usually they are kept in cages that are way too small for them. The difference in their behavior to that of their peers in cages that are too small and with no companions is quite noticeable, actually. Allowed proper room, care, and socialization, these animals are friendly and will come straight up to sniff around and eat some of the papaya we got to feed them, but were confident they could escape to their tunnels if things got too stressful. They live peacefully with each other and with the two baby goats currently at the sanctuary. 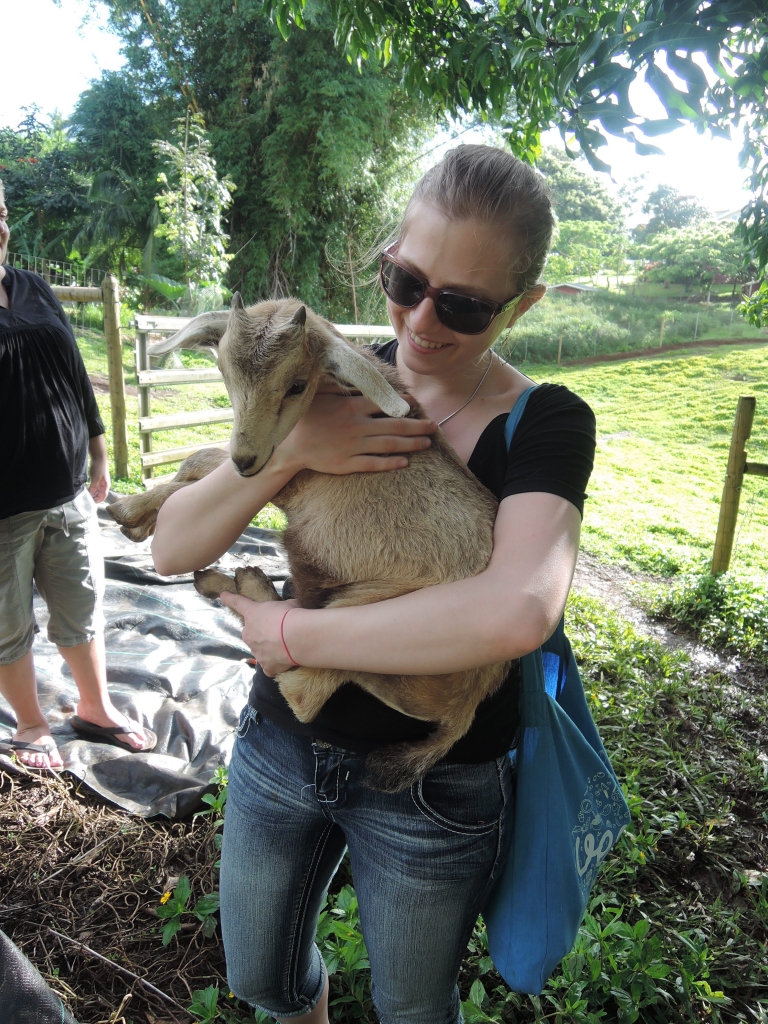 Speaking of the baby goats, how cute is Anthony?? Both the baby goats and the deer followed us on the rest of the tour after the guinea pig/rabbit enclosure. 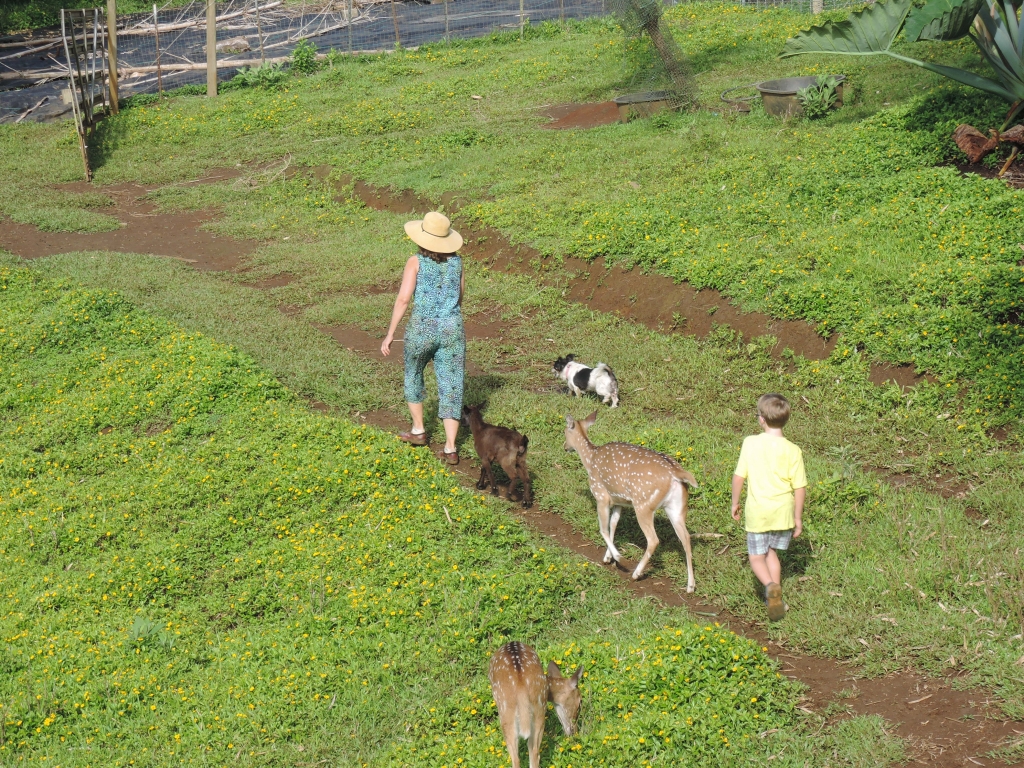 The animals are allowed to roam free, and a pass has even been created to let the goats, donkeys, deer, and cow go on their own from the area they sleep and eat in to the fields they hang out at all day. 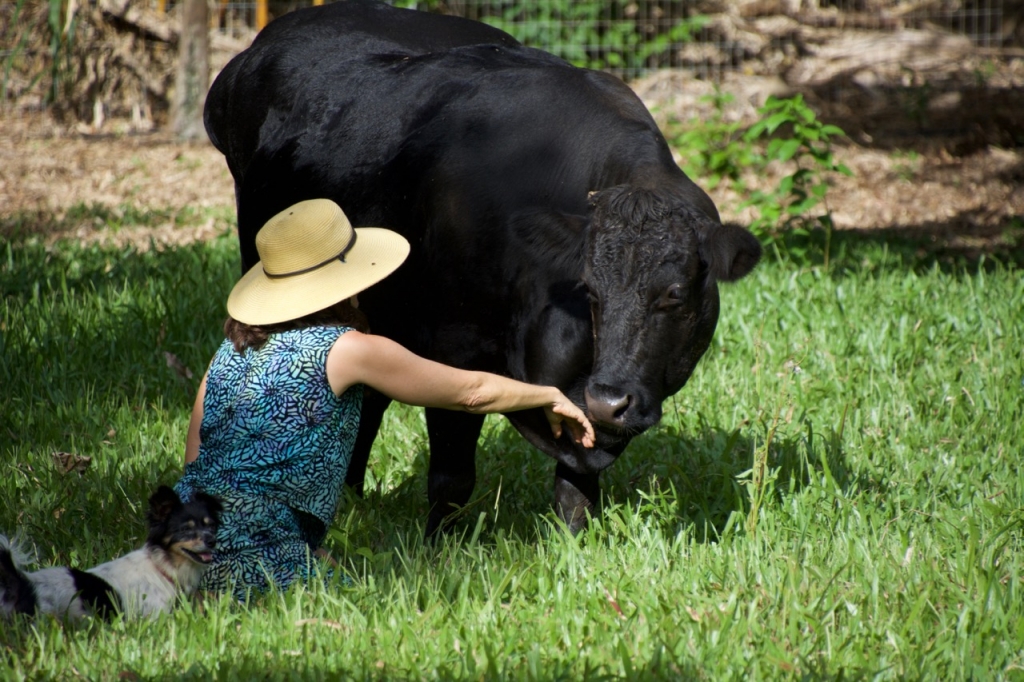 Dorothy was bound for the slaughterhouse, but a worker contacted Leilani and now Dorothy lives a happy life. She is still timid and frightened from her experiences, so she will only sometimes let people approach her, and even then, only one at a time. 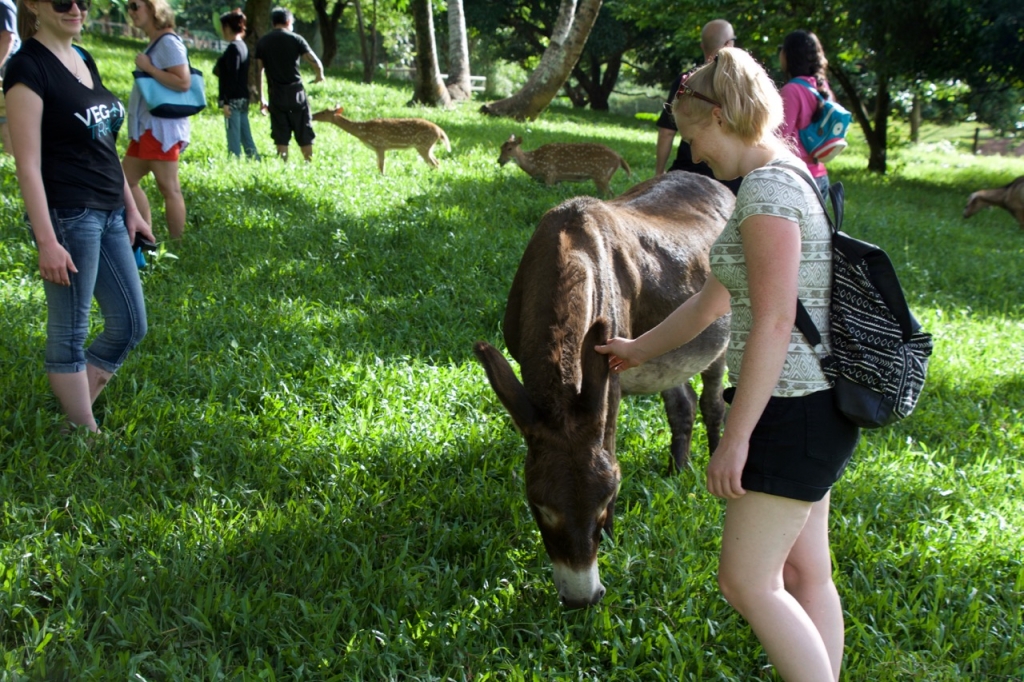 Having the opportunity to interact with the animals that most people consider food forces non-vegans to take a second look at who, exactly, they are consuming, and what their habits are causing. Rather than just targeting omnivores, Laurelee also went into how she first went vegetarian until visiting an animal sanctuary in California, and learning about how the dairy and egg industries are even worse than the meat industry. Although when originally going vegetarian, my goal was to take the final step to veganism, somewhere along the way I forgot why I had decided to stop eating animals, and got complacent. It took me three more years to remember and realise that veganism was the most ethical choice to take. I’m sure so many other vegetarians have experienced something similar, or are simply ignorant of the treatment of cows and chickens in the dairy and egg industries, and don’t make the final move to veganism. During the tour, we were reminded that all of the male chicks in the egg industry are killed (in most countries they are crushed) since they are of no use in producing eggs, and the female chicks can look forward to long lives of having their cycles altered so that they produce the most eggs they can while living in awful conditions, only to be slaughtered when they have passed their usefulness. Dairy calves have a similar fate to look forward to, with the males usually ending up in small confined boxes without light to produce them into veal, and the females separated from their mothers. Just like humans, cows have to be pregnant to produce milk, after all, and the milk is meant for their calves, not strange animals who steal their milk. When the cows stop being able to bear calves or produce milk, they are also sent to the slaughterhouse, just like where Dorothy was bound. 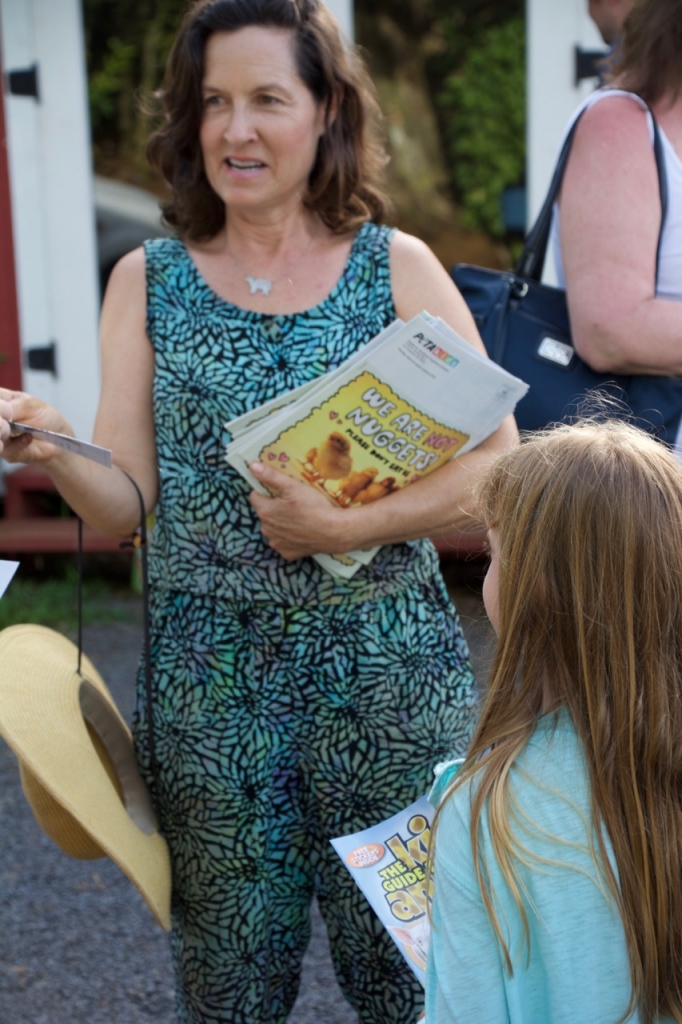 To encourage people to make a step in a more compassionate direction, Laurelee hands out guides to veganism, recipe books, and kids’ magazines at the end of the tour.

Sometimes, as vegans, I feel like we can get a little bit food obsessed. I have never cared as much about finding good food until I became vegan. And it’s not that the quality of my food has dropped, quite the opposite! But following what we ‘can’ and ‘can’t’ (or much more appropriately, ‘will’, ‘won’t’, and ‘of questionable ethics’) eat is, frankly, tiring. I find it so nice and important to take a step back and remind myself of the reason I chose to be vegan, before getting caught up in yet another ‘but bacon’ argument, or the plant-based arguments of palm oil and the ethics of parent companies. Getting to spend an afternoon with the lovely animals at Leilani was just the thing I needed, and being around other vegans and all of that compassion always inspires me to do more, and better, for the animals.

If you’re in Maui, I wholeheartedly recommend visiting Leilani Farm Sanctuary. Tours are on Wednesdays at 4pm and Saturdays at 10am, and you will learn about the residents of the sanctuary, what happens to animals on the island, and get to spend a great afternoon with like-minded people and many friendly animals. For more information on the tours, click here.

If you’re tight on time, skip the overrated snorkel boat to Molokini to go here instead! Leilani Farm Sanctuary is completely run by volunteers, so if you are a local or staying on Maui for a longer time, you can contact them about volunteering opportunities. Leilani Farm Sanctuary also hosts educational school field trips and at-risk youth programs.