A Most Phantastic Week 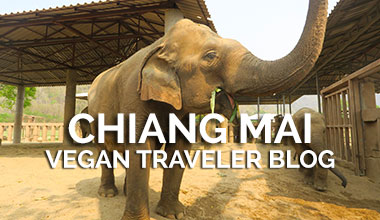 We have just come to an end of our time in Thailand, and what a way to end a visit! The night before we were about to leave Chiang Mai our plans went a little astray. We both very suddenly came down with a stomach bug, leaving us unable to do much of anything, least of all embark upon what I hear is already an incredibly intense and nausea-inducing bus trip to Pai. This was unfortunate, but we were really enjoying our time in Chiang Mai, so no big deal. We had a couple of days where leaving our bungalow to ask the person running the hostel if we could extend for another night was a Herculean task in and of itself. As soon as my stomach had somewhat stabilised I took it out to Taste From Heaven and treated it to the spiciest thing on the menu, along with brownie and ice-cream. I make good decisions. 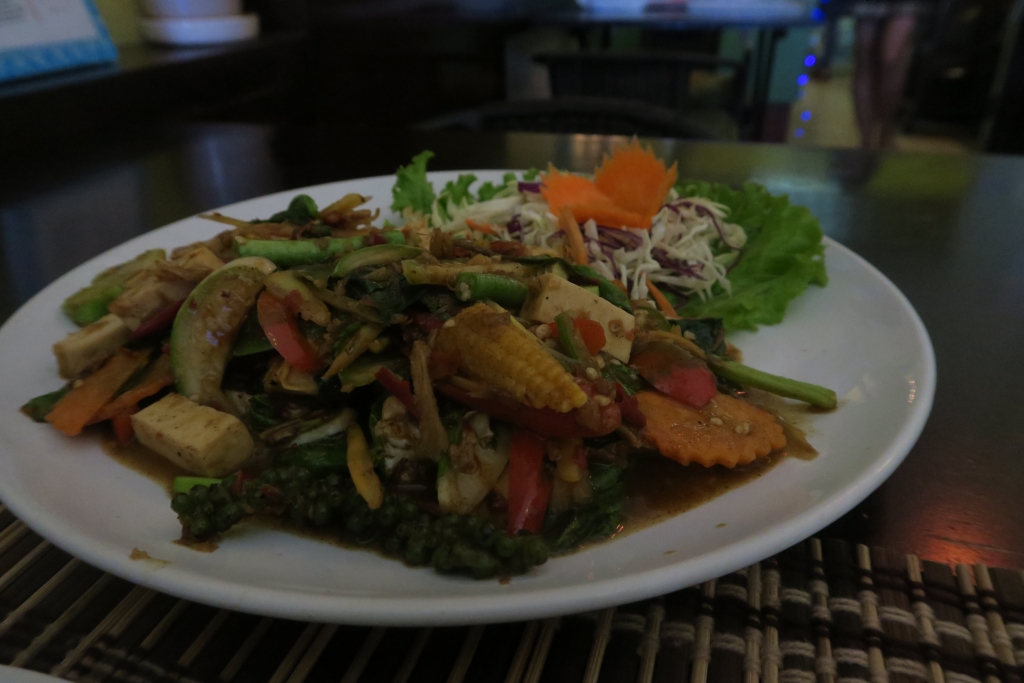 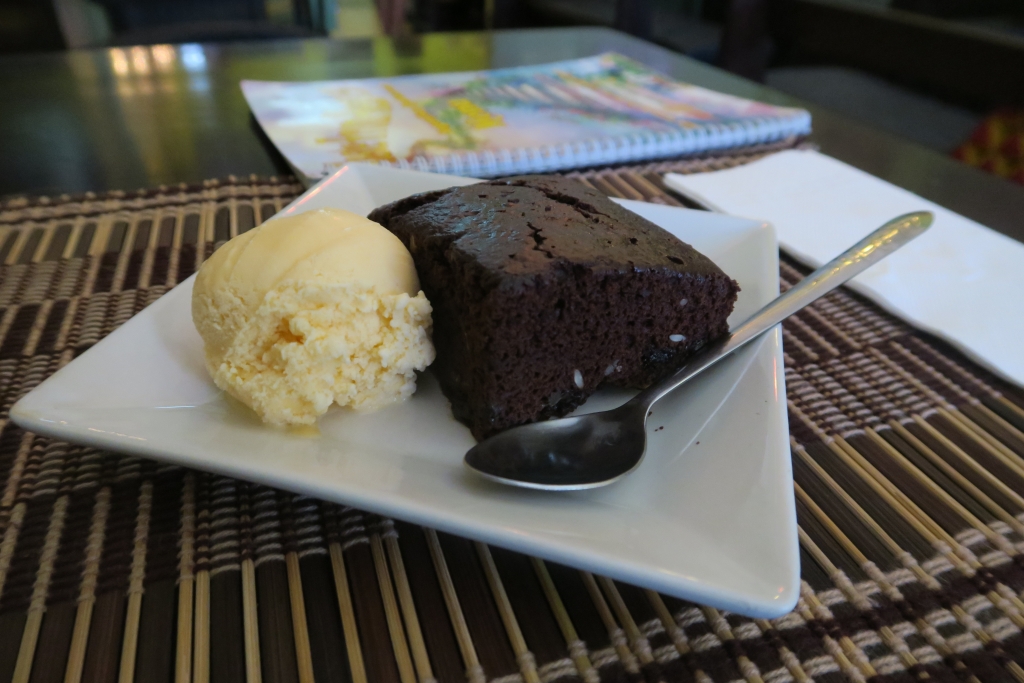 The rest of our time in Chiang Mai was fairly relaxed. We would extend our stay at the hostel one day at a time, hanging around, going to our favourite cafe, and petting the hostel dog. We did this until the night before our trip to Elephant Nature Park. We were being picked up from a hotel on the other side of the river. We were staying at Vanilla Place, one of the pick-up points for ENP. If you are going to Elephant Nature Park I would definitely suggest Vanilla Place as your pick-up point. It’s pretty easy to fit into a backpacker’s budget, which isn’t normally the case for hotels. We booked this place at the same time as booking Elephant Nature Park in September, and had completely forgotten that we mentioned we were vegan and asked if that would be accommodated in the complementary breakfast. We went out for a walk that evening and happened upon Alice’s Organic Vegetarian Restaurant, probably the most upscale place we ate in Thailand. Upscale in Thailand, however, equates to US prices, so it really isn’t that expensive. The focus in Alice’s is very much on good quality ingredients for a healthy and tasty product. They have a lot of raw options, so I opted for what turned out to be the best raw lasagne I’ve ever had, followed up with an intensely flavourful and healthy raw cheesecake. If you find yourself in Chiang Mai it is definitely worth your while to check out Alice’s. It is definitely a bit more expensive than most places in the city, but it’s absolutely worth it. 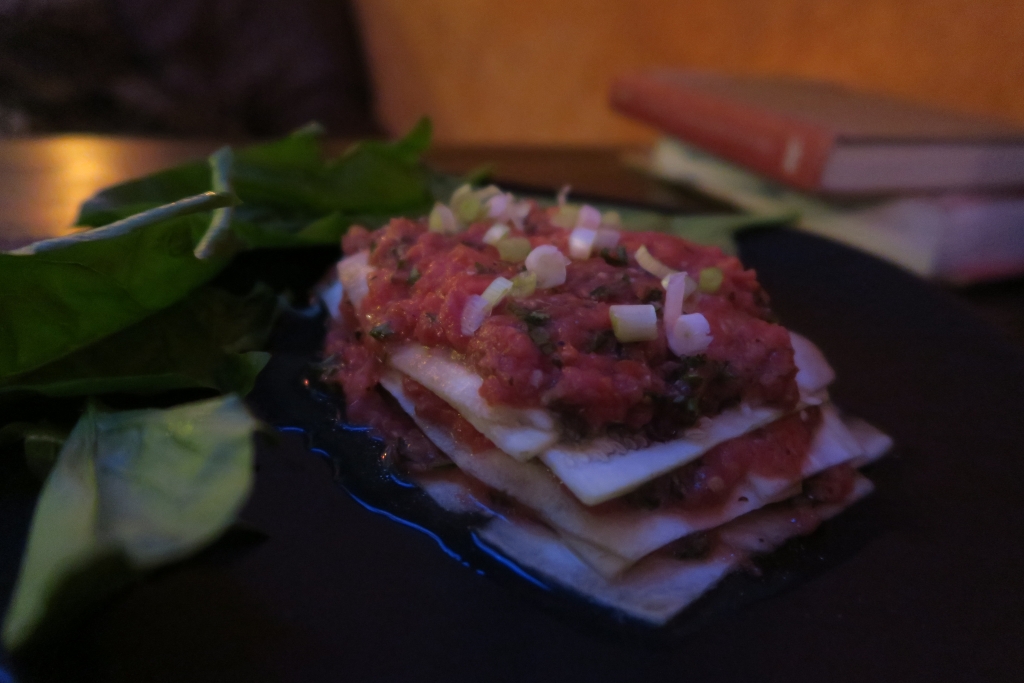 We woke up bright and early the next morning, exhausted but fuelled entirely by giddy excitement: we were going to Elephant Nature Park! This was, without a doubt, the single most exciting event in our entire trip. We crammed some fruit and cookies into our mouths, grabbed our stuff, and headed for the van. They took us around to pick a few other people up, where we met a fellow vegan, and then took us to the office, where we filled out our forms and picked up our t-shirts and water bottles. We then took off on the hour long drive to the park, watching a documentary on the elephant industry along the way.

When we first got there we didn’t do very much work at all. We were immediately taken to meet one of the elephants. We got to meet Mae Boon, the first elephant taken in by the sanctuary. We were allowed to approach her and say hello. Getting to touch her and looking out to see many more like her wandering around was an incredibly surreal and humbling experience. It was still difficult to believe that we would be living and working with these amazing and gentle beings for the coming week. Besides this the first day included another introductory documentary, two large meals, and a welcome ceremony. The food is one of the many appealing factors of Elephant Nature Park. You are provided with three meals per day, all of the food is vegetarian and around 95% of it is vegan. I quickly became friends with the chef, asking each day if there was anything that wasn’t vegan I should look out for. He would eventually comment “many vegan!” whenever he would see my generously stacked plate. 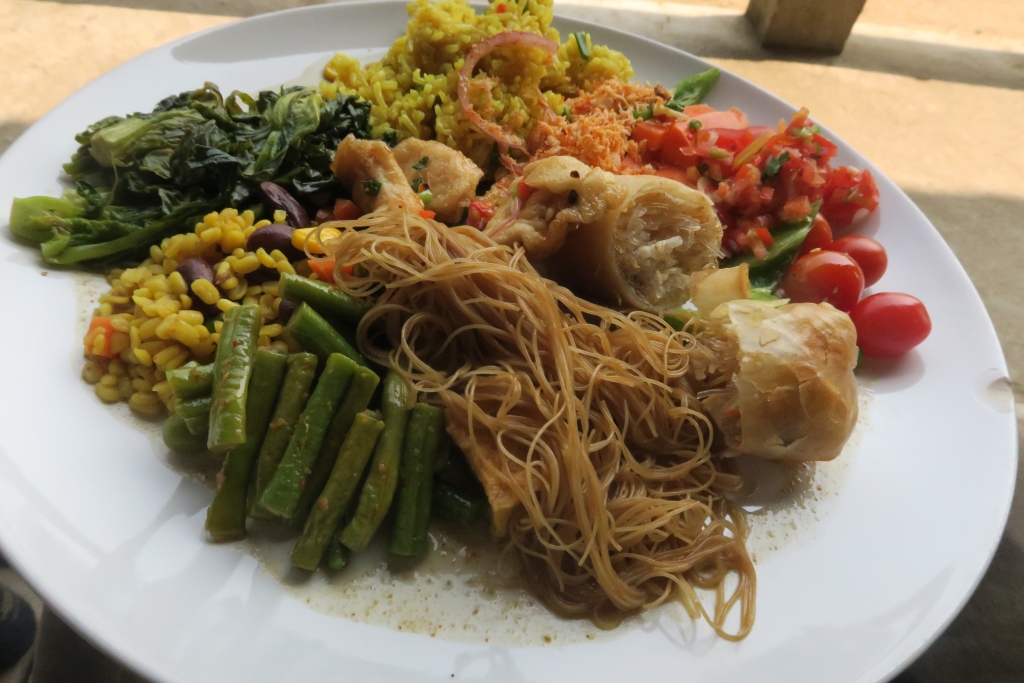 The following week was everything I’d hoped for and more. We woke up at 6:30 each day, had a large breakfast at 7:00 and started work at 8:00. I wasn’t sure what to expect from the work, but I had envisioned quite intensive labour. This wasn’t necessarily the case. The volunteers are split into groups and each group has two jobs per day. The jobs vary greatly in degree of difficulty, with most of them being pretty straightforward and more about showing how your money goes entirely to protection of the elephants. You work quite a bit with the elephants, from preparing their food and feeding a few, to bathing them, and everyone’s favourite, scooping up their poo. There is even one job that is simply walking around and meeting some of the individual elephants. During these days your volunteer guide will teach you quite a bit about the elephants. From the general anatomy and behaviour to the personal stories and hardships of individual elephants.  There are over sixty elephants living in the park so it isn’t very likely you’ll get to meet them all perfect excuse to stay for longer, though. 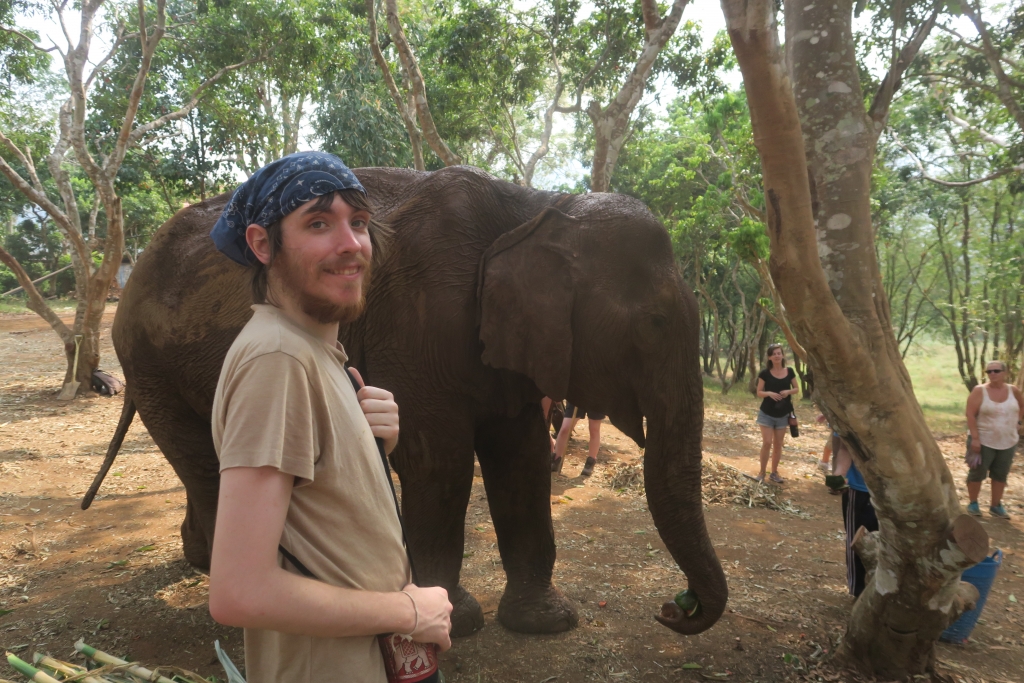 Other jobs, however, were a bit more demanding. While here you will help with park maintenance. When our group did this, it was raking compost from the corn. This doesn’t sound like a lot of work, but the amount of corn these elephants go through certainly makes this a physically demanding task. Another job you might find yourself doing is cutting and gathering the crops for feeding the elephants. For this job you drive out of the park and to the nearby vegetable farm with which the sanctuary have a good working relationship. We were taken to a massive corn field, each handed a sickle, and started hacking away. This is by far the most physically demanding of the jobs you do, so much so that the day you do this you will only have one job for the day. As much as the elephant centered tasks were obviously fun and exciting, I possibly enjoyed this stuff more, knowing that it was more pressing and important to elephant well-being. 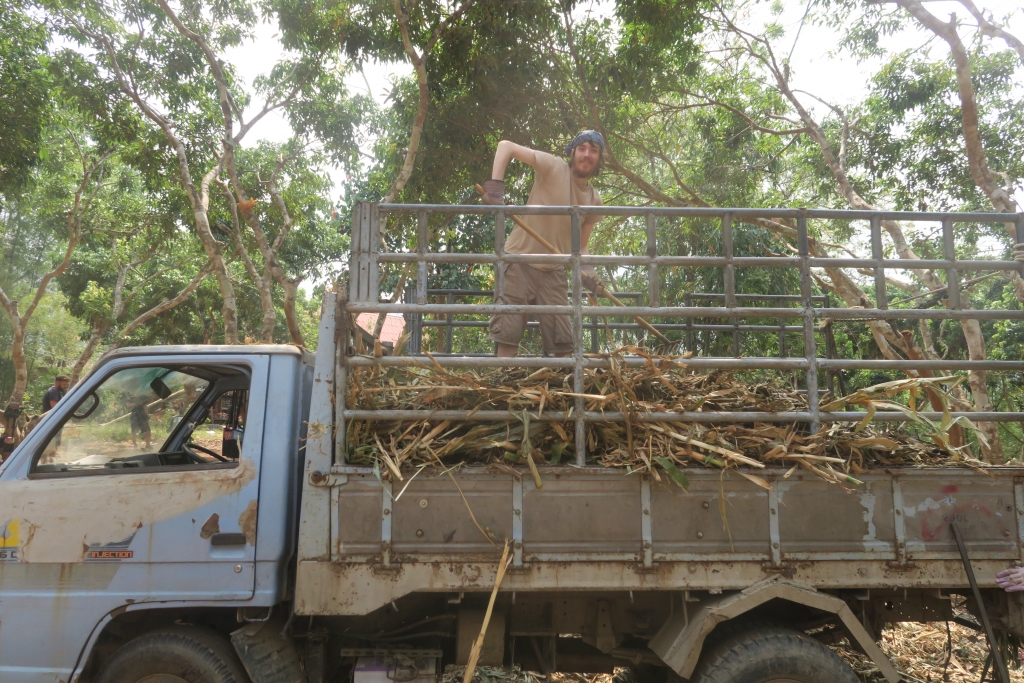 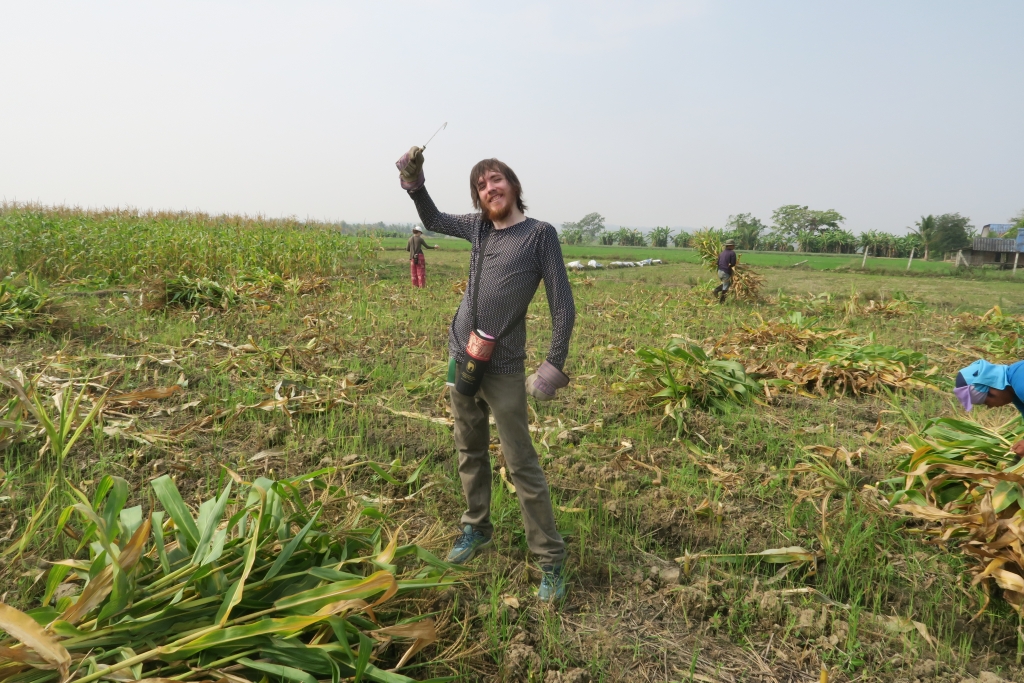 We had a very busy and very fulfilling week here. Another massive advantage of the sanctuary is that it doesn’t only look after elephants. There are a large number of dogs, cats, cows, and pigs here. Along with a few others who we never met. In between your time looking after the elephants, you can always go take a few dogs for a walk, or help look after someone else. There is such a large amount of good work coming out of this place you will never find yourself shy of something to occupy yourself with. The week comes to a close with a talk from Sanguden “Lek” Chailert, the park’s founder. In her talk she discusses not only the abuse in the elephant industry, but in the animal industry as a whole. She discusses the importance of being vegan and taking a stance against the exploitation of any form of life. We spoke to her afterwards and she is one of the most amazing people I have ever met. With so much stacked against her she continues to fight to protect all life and to educate the people, with the hopes that one day attitudes toward non-human animals will change. 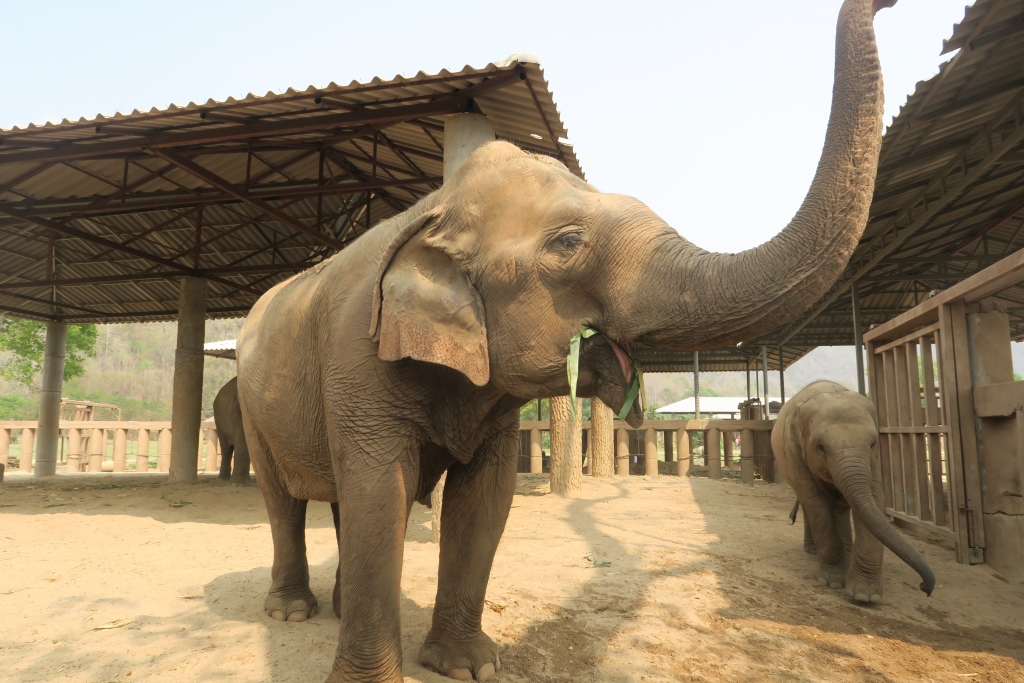 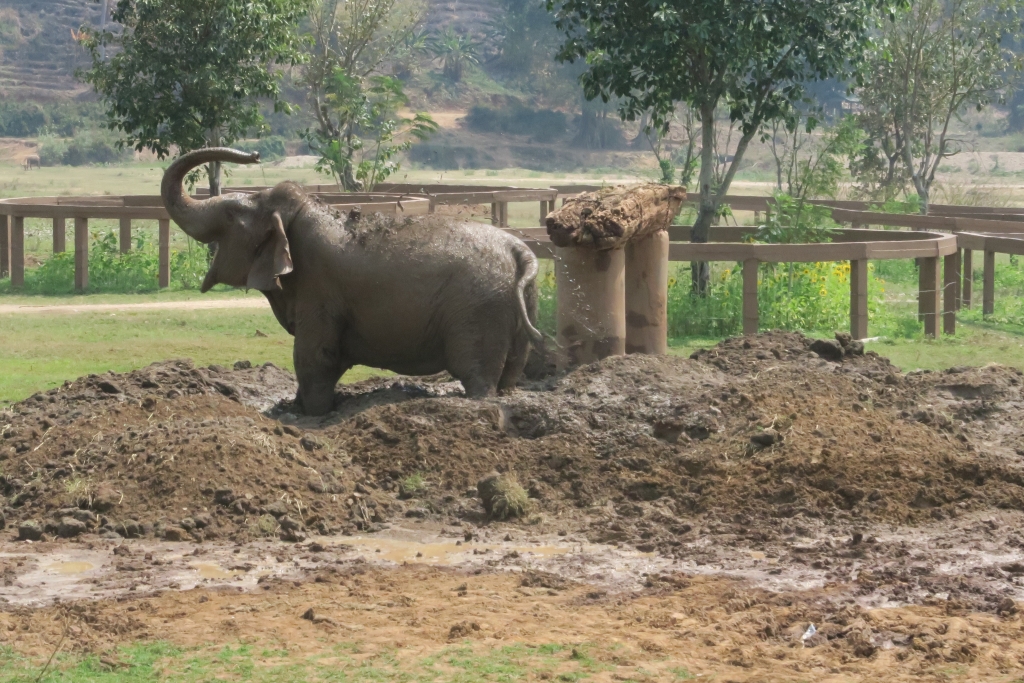 Elephant Nature Park is a truly amazing place. I could definitely imagine staying here for months. The stories of these elephants are incredibly sad. Many of them are blind, be in from flash photography or human violence; many of them struggle to walk, whether it is from back issues from being ridden or being walked across minefields. Knowing the suffering these beautiful creatures have went through and knowing that it is merely a flash in the pan is incredibly sobering. But seeing them live free and happy, and knowing that Elephant Nature Park will continue to fight not only for these sixty-something elephants, but elephants and other non-human animals all throughout Asia is an incredibly humbling and inspirational feeling.