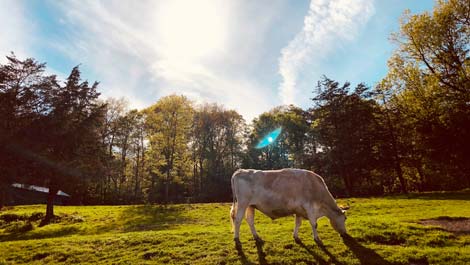 My boyfriend and I took a weekend getaway to Catskill Animal Sanctuary (CAS) in Upstate New York, just two quick hours north of New York City. CAS has rescued over 4,000 animals since 2001 and is currently the home of more than 300 animals whom were all rescued from cruelty, neglect, and abandonment. Not only do they rescue animals at the average rate of 11 individuals per week in the seventeen years they’ve been open, they also include “championing vegan living” and “igniting social change to end their [animals’] exploitation” as the other two parts of their mission statement.

These ideologies couldn’t have been more apparent in the two short days of our stay at the onsite bed and breakfast called The Homestead. Set atop the grounds of the sanctuary, The Homestead is a quaint pre-Civil War house with four guest rooms available for rent. We stayed in The Rambo Room, which was the perfect size for us and our sweet dog. Oh yea, your canine kids can come stay, too! We have had to turn down some weekend getaway ideas because we could not bring our dog, so to find this fur-friend-friendly place that is also on location of a sanctuary was a real win. 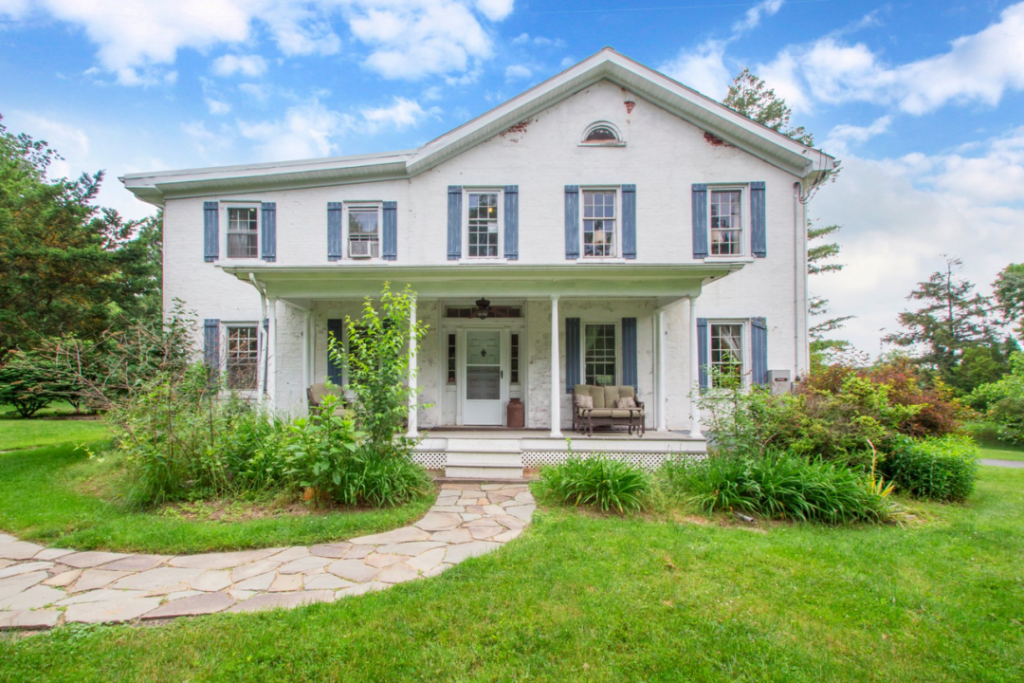 Just having the option of staying at The Homestead in and of itself truly espoused vegan living. I told my boyfriend when we were getting settled in that it was so nice to know that we wouldn’t accidentally sit on leather or wool (as we’ve done at many AirBNB’s and hotels) and that all the products in the house were cruelty free and vegan (i.e., shampoo, lotion). Not only that, because it is a bed and breakfast, breakfast was cooked for us by a vegan cook who is also the host of the house. We followed the host’s recommendations to a lovely hike at Kaaterskill Falls and to Garden Cafe in the nearby town of Woodstock. The food was as good as any of our local New York City fine dining restaurants with the easygoing hippie vibe that Woodstock exudes. After some shopping in the whimsical downtown we headed back to the bed and breakfast and embarked on the most special and personal part of our stay: the sanctuary. 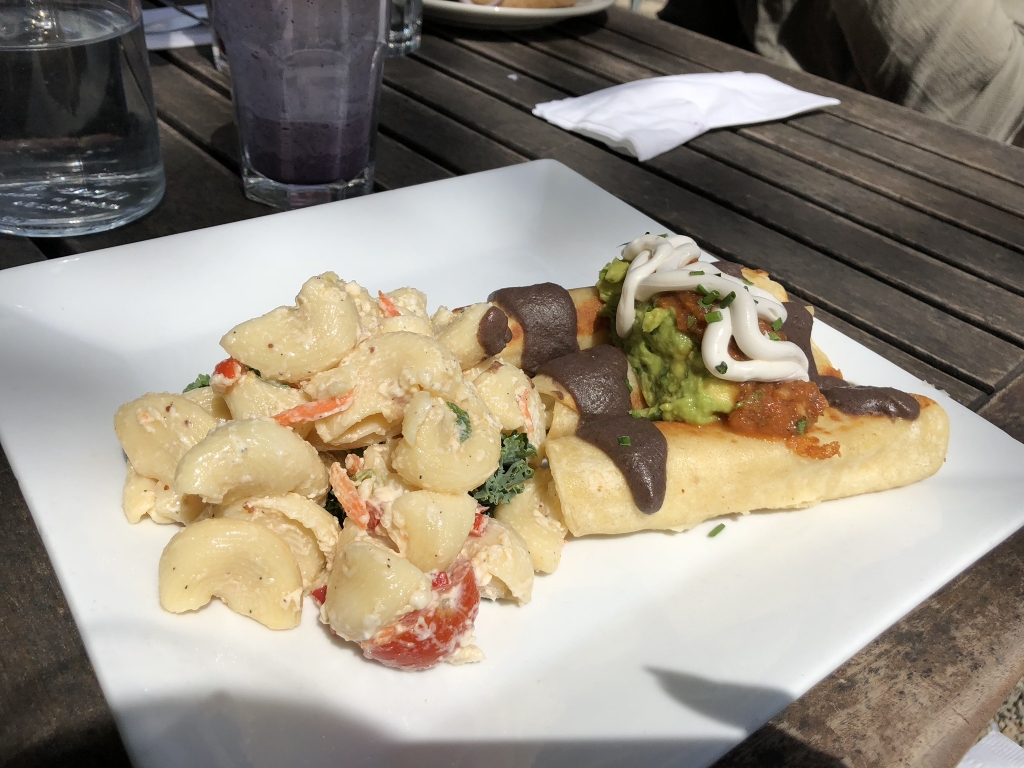 The biggest benefit of a stay at The Homestead is access to the sanctuary during non-tour hours. We just slipped on our visitor passes and strutted down the hill to the animals. The goats and sheep were freely running about, sometimes walking with us and sometimes rushing ahead of us, as if saying “come check this out!”. The chickens, geese, and ducks were also wandering about along the paths, mostly digging for worms. We saw one hen take a worm gently in her mouth, skuttle over to her dear friend, and plop the worm down for her friend to eat. Her friend seemed gracious and quickly ate it up.

There were several enclosed pastures that seemed to stretch for acres where the larger animals call “home”. We walked by quarantined areas where no doubt recently rescued or ill animals were recovering. As we strolled further, we walked alongside a beautiful pond that the water birds frolicked in. Willow trees hung low with their swaying leaves, making the scene picturesque. 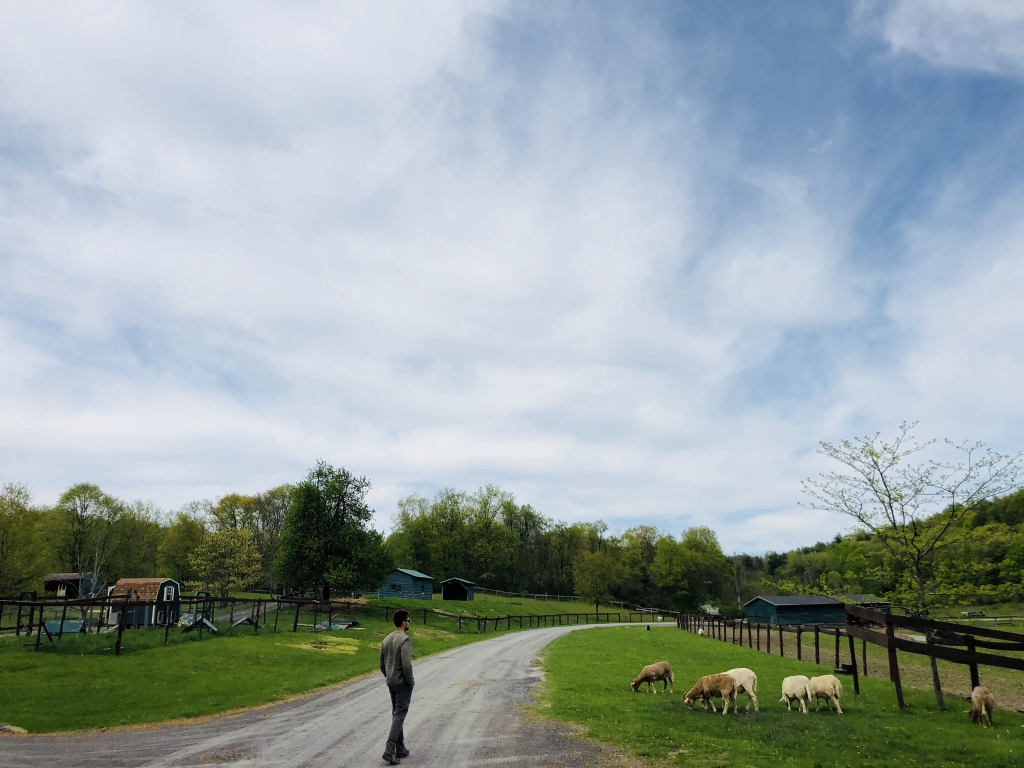 Our tour guides (who looked an awful lot like sheep) taking a snack break while we wandered the grounds of Catskill Animal Sanctuary.

We made our way back past the entrance and to the other direction we hadn’t gone yet where we would spend, I kid you not, an hour hanging out with two of the resident cows, Jesse and Amos. They were the sweetest, warmest bulls you could imagine and they let us talk to and love them for longer than we deserved. As we started walking away they followed us and stopped for a drink at their water bucket. I watched and realized I had never seen a cow drink water. It may sound trivial, but I was fascinated. They essentially made huge straws out of their mouths and sucked the water in. The sound and gesture was so endearing I never wanted to leave.

But we went on and visited two very special pigs who were of the original 12 from the documentary, “The Last Pig”. To see the two of them rolling around in mud in front of us and enjoying meals of hay made it so much more real. 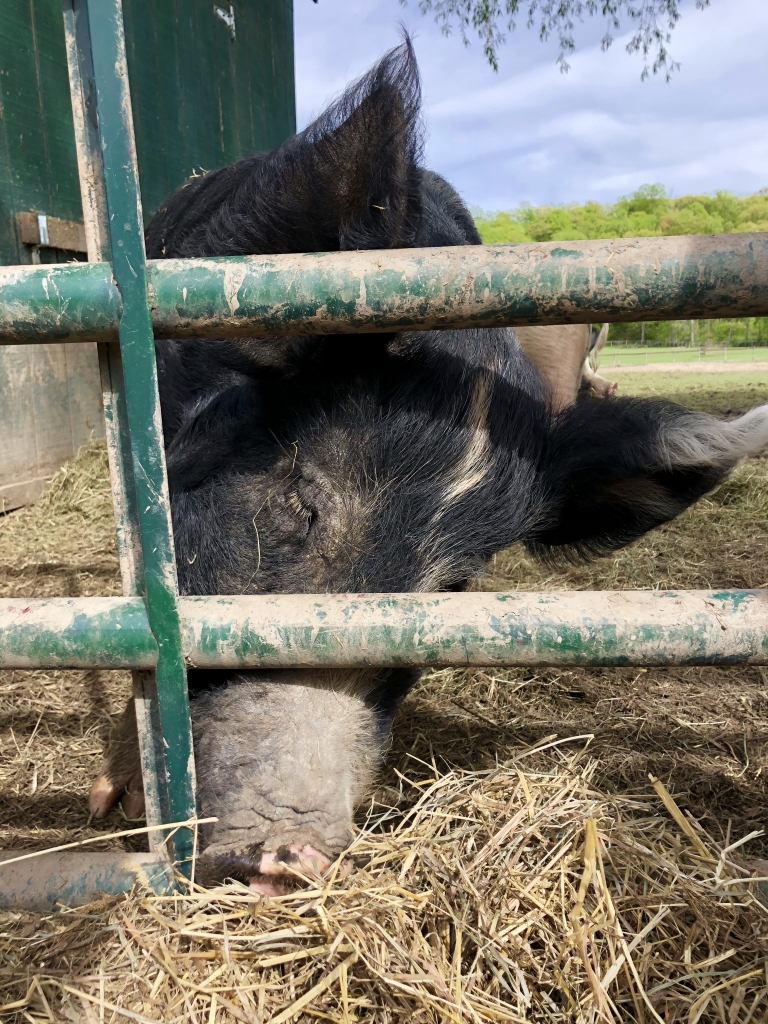 Audrey, one of two pigs rescued by Catskill Animal Sanctuary, as seen in “The Last Pig”.

We spent hours there and it felt like our home, too. I didn’t want to leave the serenity, peace, compassion, and sanctuary that CAS had gifted us the last two days. I hadn’t slept that well in months, I hadn’t felt so in touch with nature and her creatures in just as long. And I sure hadn’t felt so surrounded by vegan values possibly ever. But I know we’ll be back. And you should go too. If all I’ve shared isn’t enough, they do cooking classes, mentoring, summer camps, and more. They truly do all they can to champion vegan living and make this world a better, safer place for animals. And when you’re there, you can’t help but feel the love and compassion you are surrounded by. 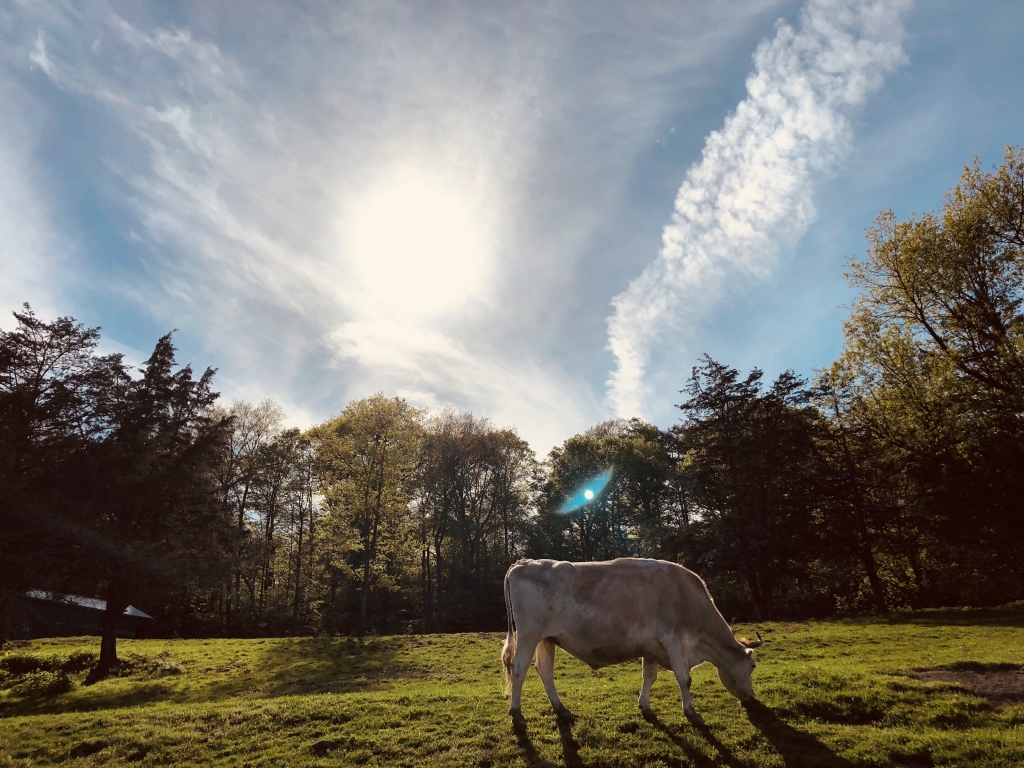 Jesse, one of the resident cows, enjoying a graze.

The following are some ways you can support Catskill Animal Sanctuary:

Become a Member (We’ve been able to use the benefits of our membership many times now, including 10% off many vegan restaurants in New York City!)

Book a Reservation at The Homestead

I hope you enjoy Catskill Animal Sanctuary as much as we did!