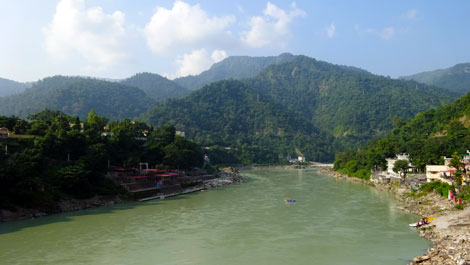 We spent almost 3 weeks in Rishikesh, North India, in September 2017. It’s a great place to be, by the holy river Ganges, surrounded by yoga classes, great restaurants, ashrams and the stunning Himalayan foothills. It’s a vegetarian town too, making it pretty easy to find great vegan food.

There’s SO MANY restaurants and cafés in Rishikesh that I reckon even if you lived there you would not have tried them all. In our few weeks there we had a good go at seeing how many we could get through. Below are the ones we liked the most. It is by no means an definitive list as even the ones that haven’t made the cut here had such a huge menu that we may have found something even better on it had we revisited. The ones we describe here are the ones we went back to again when we wanted to be guaranteed a good feed.

Most of these places to eat can be found on the Trayambakeshwar temple side of the Lakshman Jhula. 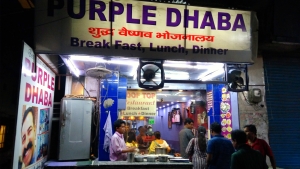 Bread wizard at the purple Dhaba

Vegan rating – 3/5 – a good amount to choose from but nothing is labelled as vegan so you either have to know what the dishes are or double check with the guys working there.

Price – Less than a fiver should fill up two people nicely.

This was by far and away our favourite place to eat. When we finally left Rishikesh we walked past it carrying our rucksacks and got a wonderful wave goodbye from the guys there (yes, we went there a lot). One of our favourite things about it was the guy who stood out front all day everyday making all their breads in a tandoor, the guy was some kind of bread wizard. The food tasted amazing and was served quickly and steaming hot. We didn’t have a bad meal here. A regular dish for us was the chana masala, but I’d recommend the mushroom masala as well. As for the breads, after triple checking with them, we were assured that their naan breads did not contain any yoghurt and as they were cooked in a tandoor there was no ghee involved unless you asked for it to be added. The garlic naan was incredible, but you have to be prepared to for a serious amount of garlic – do not try and socialise after eating it, you will not make any friends!

Vegan rating – 4.5/5 – lots of vegan options and most things labelled as vegan. Massive menu though and could have done with veganising more of their dishes.

Price – Two people will likely spend around £5-6 on their first visit but can get away with less than that if you have the willpower.

This was the first place we visited as it was one of the first places we read about in the Lonely Planet, and we weren’t disappointed. You could get a soya chai, a mango lassi made with coconut milk, and a tofu and veg stir-fry as your post morning yoga feed and that would easily see you through to dinner (obviously with a few street food snacks along the way). It had the added bonus of having a beautiful view of the Ganges, but the best seats were nearly always taken by someone who was clearly going to nurse their chai for the whole afternoon.

Vegan rating – 2/5 – sometimes it was not clear at all whether the food was vegan, or they were just nodding to get you to buy it!

Street food was everywhere but here are our favourites:

Samosas – There were loads of stalls selling freshly fried samosas. I was assured they were fried in oil and that there was no yogurt in sight. I spoke to a couple of locals and they corroborated this story. They are obviously incredibly unhealthy, but for around 10p a samosa, you couldn’t turn your nose up at them. And they tasted tip top. Great for well earned treat after a sweaty afternoon yoga session.

Catch this guy for chole kulche if you can!

Chole Kulche – We sampled two of these on our food tour of Delhi, neither one was the same and this one kept with the trend. It is essentially a chickpea based dish served with bread. What I loved about the Rishikesh one was in order to eat it, you had to be in the right place at the right time, as it is served up to you by a guy who wheels his stove around on his bike. It was a joy to watch him put it all together (chickpeas tossed in spices and lime juice and onion and plenty more beside). I managed to get a kid to do some basic translating for me and found that the chickpea dish was vegan, but the bread contained butter. But the chickpeas on their own were well worth the 30p.

Aloo tikki – There are plenty of places serving this all round the streets of Rishikesh, and in true street food form, none were the same. It’s based around a fried potato cake and some sauces. The cake apparently just contains potato, flour and water, and I’m pretty sure I believe them on this front as I saw one of them mixing up a bowl and there were no eggs in sight. From there it can be served as it is (ie. the fried cake with sauces poured on top) or, as our favourite one did, with a chickpea dish poured on top. We found this one just the other side of the bridge and it was a taste sensation.

Momos – These are Tibetan steamed or fried veg dumplings and they are ace! You can get 8 for 50p, or 16 for a quid, you do the maths. There are several places that serve them but the best seem to be in a very small space where there are two carts next to each other serving them, opposite a restaurant that specialised in them. You can’t go wrong. All the veg ones were vegan as well. Winner.

Fruit – So many fruit stalls offering fresh as you like tasty fruit. From bananas to mangos to oranges and grapefruits. Most of the stalls offer a juicing service as well. The fruit tasted as you imagine the perfect looking supermarket fruit should taste. So much flavour. But don’t go expecting any pretty fruit here and make sure you are careful to wash everything in filtered water first.

From very early to very late, these guys will sell you tasty fruit.

Vegan rating – 3/5 – a good amount of vegan stuff on the menu, but not labelled as such.

We were recommended this place by our hostel but after looking high and low for it we gave up and settled into the restaurant closest to us. As it turns out, due to my bad hearing and butchering of the Hindi Language, we were looking for ‘Jacksons’ instead of ‘Chatsangs’! As luck would have it, we had actually ended up in Chatsangs when Gen pointed to the sign laughing her head off at me as she realised my mistake! We had an awesome aloo gobi in here and their breads are served in a basket that seems to keep them magically hot for the whole meal (that or we always ate like someone was going to steal our food from us at any minute)!

Vegan rating – 4/5 – only a few things labelled as vegan, but plenty of things on there that were vegan, or able to be vegan.

Price – Two people will be easily full for under a fiver.

A Disney Land style entrance for a magical setting

Bit sad we only found this place on our penultimate day, otherwise I have a feeling it would be higher on our list. It’s a bit of a trek to get there (take a torch at night – although it’s lit the rolling power cuts may catch you off guard) but it is well worth it. When you finally turn the corner to it, you see a beautiful garden and open air/partially covered restaurant underneath the mango trees. It looks down onto the rest of Rishikesh and makes for a great setting for any meal of the day. They have live music there nearly every night, and we were lucky to eat dinner while listening to a very talented sitar player. The food is amazing as well, with their chickpea flour battered onion pakora being a big hit. Also, by far and away the best daal fry we’ve had in India so far. The staff are lovely, and really accommodating. It’s probably a good thing we found this one so late as there is a chance we wouldn’t have tried out so many others!

There were plenty of other places where you could get vegan food. What with this being an entirely vegetarian town it’s pretty easy for a lot of things to be accidentally vegan, just depends how daring you want to be! We also stayed at an ashram in Rishikesh and wrote about how easy that was as vegans, and took a vegan cooking class in Rishikesh. If you have any other recommendations for Rishikesh please add them in the comments below.