NYC – My Kind of Town 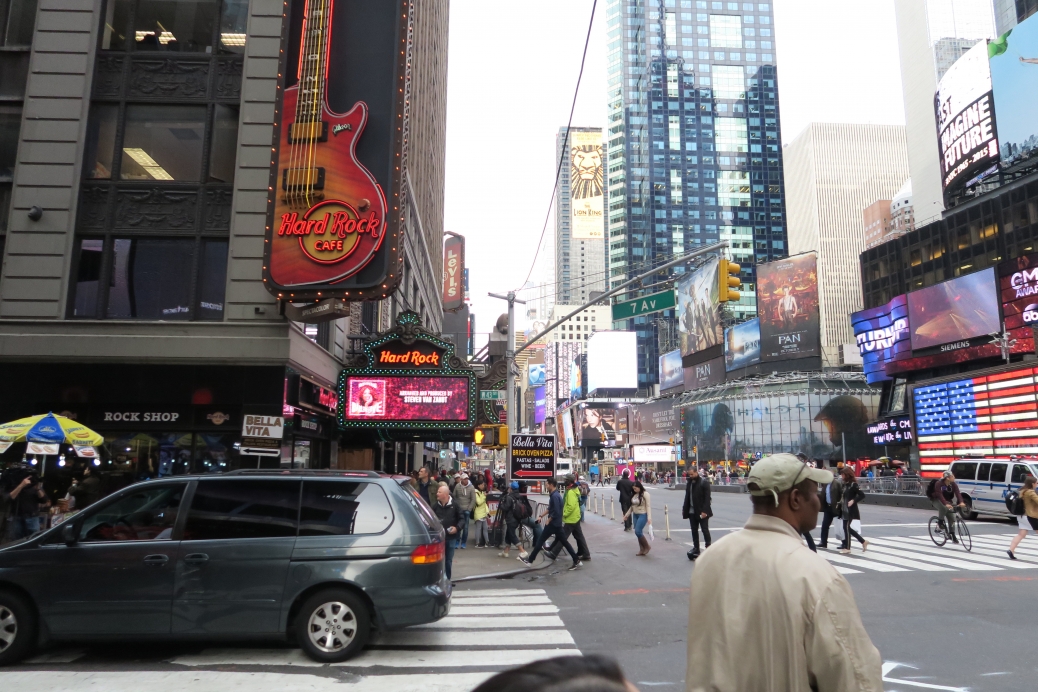 I’m going to launch straight into this New York post with a picture of the biggest, most delicious pizza ever. 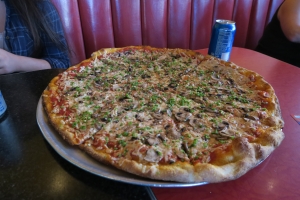 This glorious pizza was purchased and eaten in full at a cute little omni-pizza place called Two Boots. It was seriously just so amazing. I’m a really big fan of super cheesy pizzas and I’ve found that a lot of pizza places just don’t do the vegan cheese well. It’s either just a light dusting cheese, or scattered blobs of cheese, or no cheese at all. I find myself forever wanting more, hoping for more, praying for more and ultimately being disappointed in vegan cheese pizza but not this time! No, no, not this time. This time there was cheese-a-plenty, this time the pizza was exactly what you would get from a small place up the street from your house. The kind of place that you and your friends almost get kicked out of in the summertime because you hang around for too long and only buy one pizza between the eight of you. This pizza was nostalgic. This pizza was beautiful. Anyway, there were other things in New York. We did a food crawl with my sister-in-law Erin and VeganTraveler Shannon who were joining us for the trip. It lasted all day and I can’t even list how many places we went. It was a lot. It was tiring. We walked about nine miles that day. All that walking was probably a good thing though, because let me tell you, we have not been eating healthy. It’s been all seitan, sweets, and snacks for a few weeks now and New York has only made it worse. I keep telling myself I’ll eat healthy later. Maybe I’ll just walk some more. I mean, there are just so many beautiful, delicious, and unhealthy things that New York City vegan restaurants have to offer! Go ahead and just look at that pizza again! I know some of you are probably interested in things other than just the pizza in New York, like Times Square (which I only very recently learned was “Times Square” and not “Time Square”), so here is a picture of Ross and I being really cool tourists and standing in the way of the buzzing foot traffic to get our picture taken in front of all the ads. 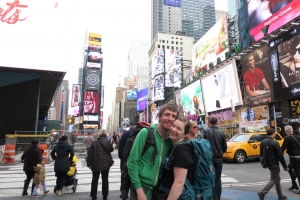 There’s such pure joy and utter dorkiness on my face. As many times as I have been to NYC, this was definitely the most fun. I loved being able to show Ross around to the places I like to hang out when I’m up there for school. We went to places  like the Uncommons and Union Square in Greenwich Village. It is now occuring to me that I completely and totally forgot to swing by the Strand, a quite famous really big old, new, and rare books store. We were really busy the whole time we were in the city, though, so it’s no wonder it slipped my mind. I can’t even remember everything that we did and in what order so that I can write a cohesive blog post! All I really know is that I ate a lot of good food, hung out with good people, and walked about 30 miles within a few days of tourism. Also, I saw Naked Cowboy on my way to catch the bus to Philly today, and as everyone who’s ever walked through Time(s) Square knows, seeing him is as essential as it is inevitable. And so Naked Cowboy was a perfect conclusion to my time in New York City.

(Sneak Peek: There was another beautiful pizza.)