In the City That Never Sleeps (Part 3) 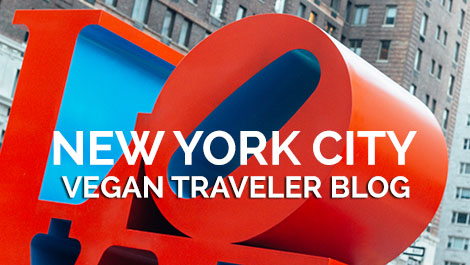 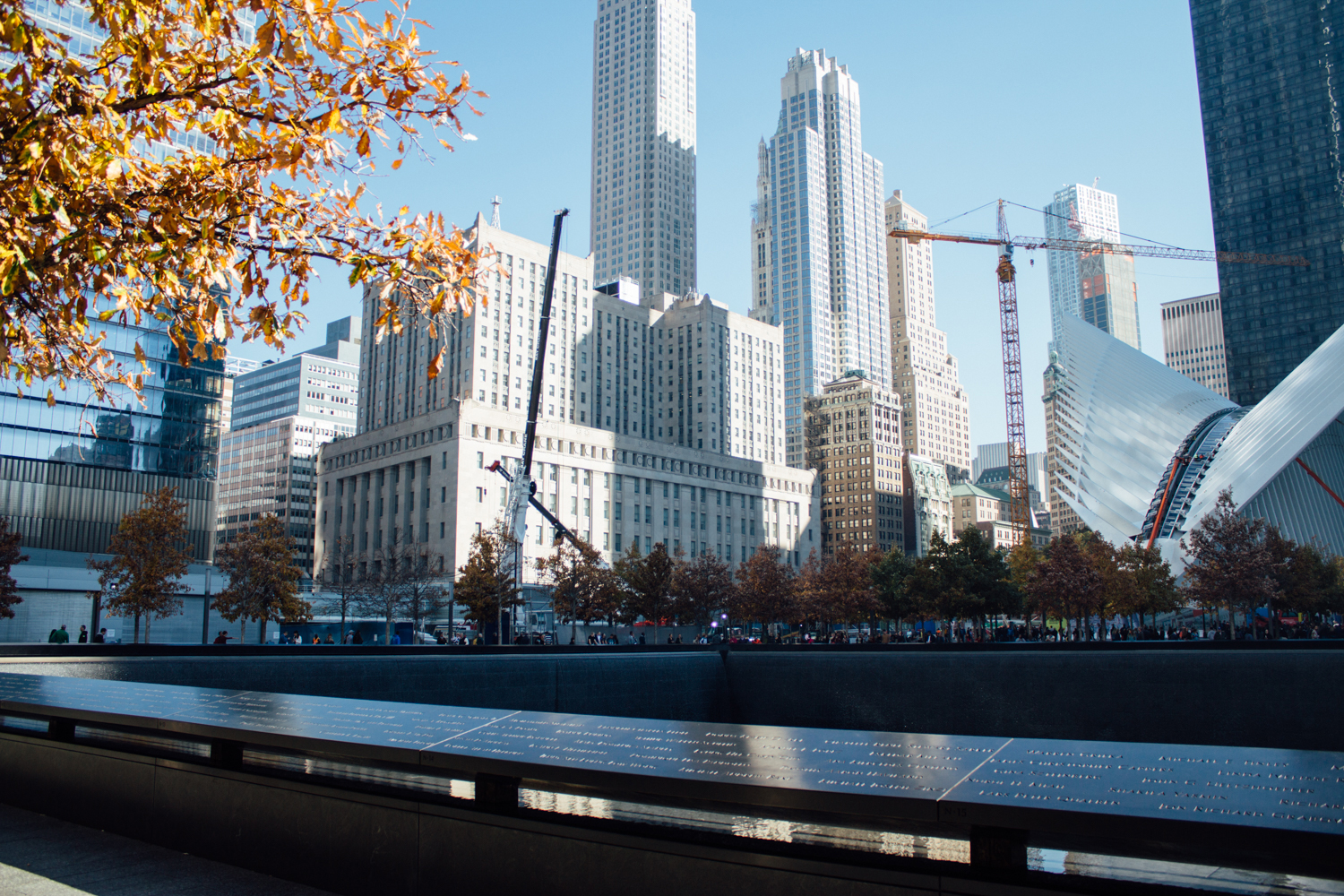 The last couple of days of my New York trip were packed with excitement. On a Tuesday Ellie, Ross and I began our vegan food crawl of New York City. We even filmed a video that you can check out HERE (or keep reading and watch it below), but just a warning: it’s filled with some of the tastiest food of our trip. After visiting Terri and gathering some footage for the crawl, we walked over to the 9/11 Memorial and Freedom Tower. Being here was truly impactful to me, as an American citizen. I remember what happened on September 11, 2001 even though I was only in elementary school. We all gave a few moments of silence as we stood before the names of all the people that lost their lives on that day as we listened to the waterfalls. I think whether you grew up in New York or are visiting for the first time, this is a place that we should all pay our respects to. 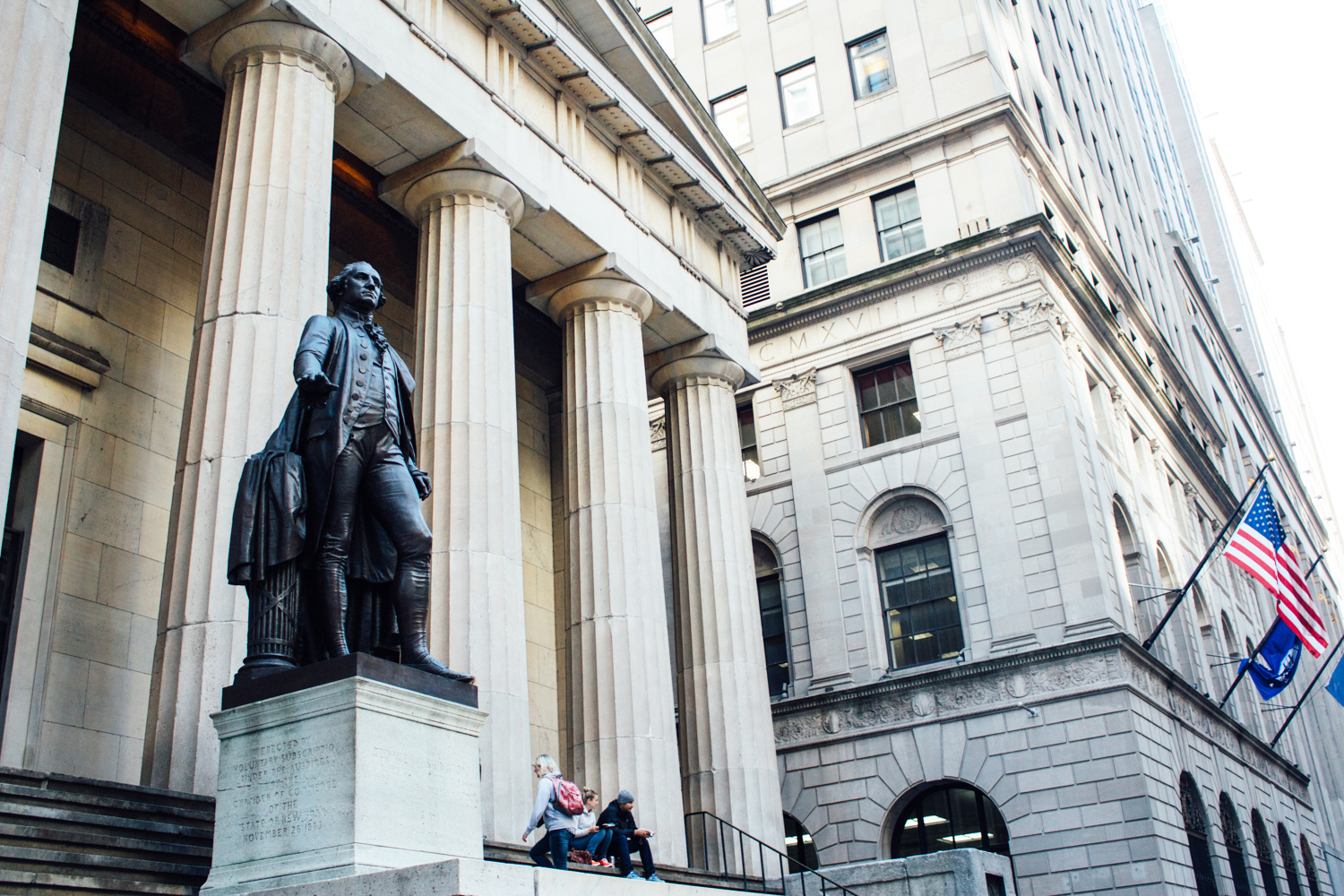 We quickly made our way over to Wall Street and the New York Stock Exchange. Here, we saw many businessmen in their suits as well as people taking photos by the bull statue who were clearly tourists. There are definitely some cool places to take photos over here and buildings to look at, but I wouldn’t recommend going here if it’s too out of your way. By this point we were getting pretty hungry, so we made our way over to the subway to get to our next spot. 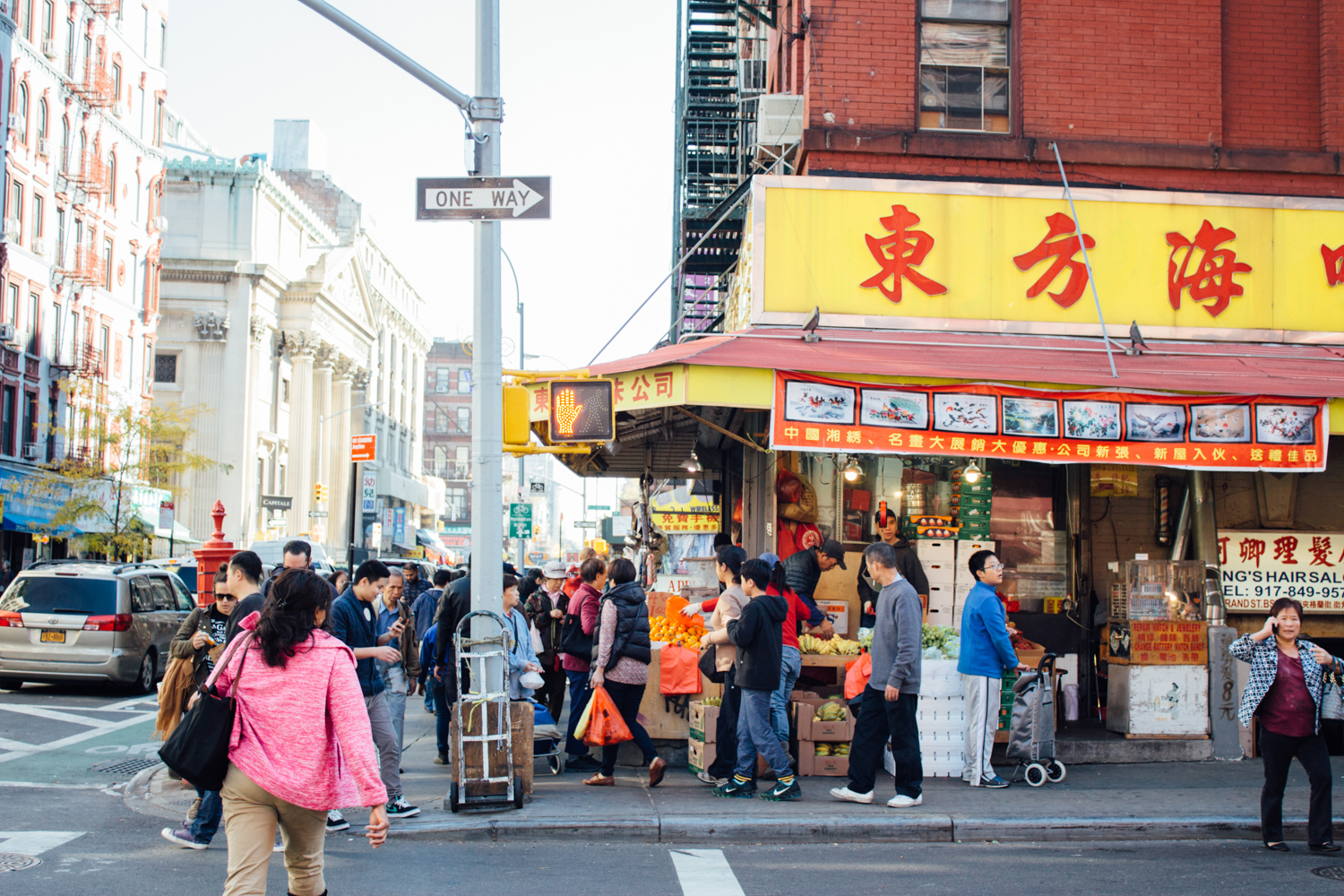 We took the J train over to the Canal Street Station, and we were instantly greeted by Chinatown. Here there are lots of markets selling produce (and unfortunately some non-vegan options as well) and plenty of other languages being spoken. We also walked through Little Italy on our way to MooShoes, which is an all-vegan clothing and shoe store that has some cute cats walking around inside. The employees of MooShoes were all very nice, and as we told them about our food crawl they kept making recommendations of new places to check out (most of which were already on our list). Around the corner from MooShoes is an all-vegan and gluten-free bakery called Erin McKenna’s. This place has some locations in Florida and L.A., but since we were here we figured it would still be a great place to stop by. Formerly known as Babycakes, this bakery had some great options like lemon cake, baked donuts, and these excellent Pumpkin Chocolate Eclairs. When we first walked in I even spotted someone with a t-shirt that read “I’m the vegan your mother warned you about”. It’s true that NYC is a small world for us vegans. After a few of the stops, our sponsored travelers were ready for a larger meal, so we walked over to Wild Ginger which was a great place for some healthier food with an Asian flair. We split their miso soup, some Sweet and Sour bites, and a curry with veggies and this really good soy protein. All of us really enjoyed stopping here for lunch, and we were all ready to keep going on our food crawl journey. 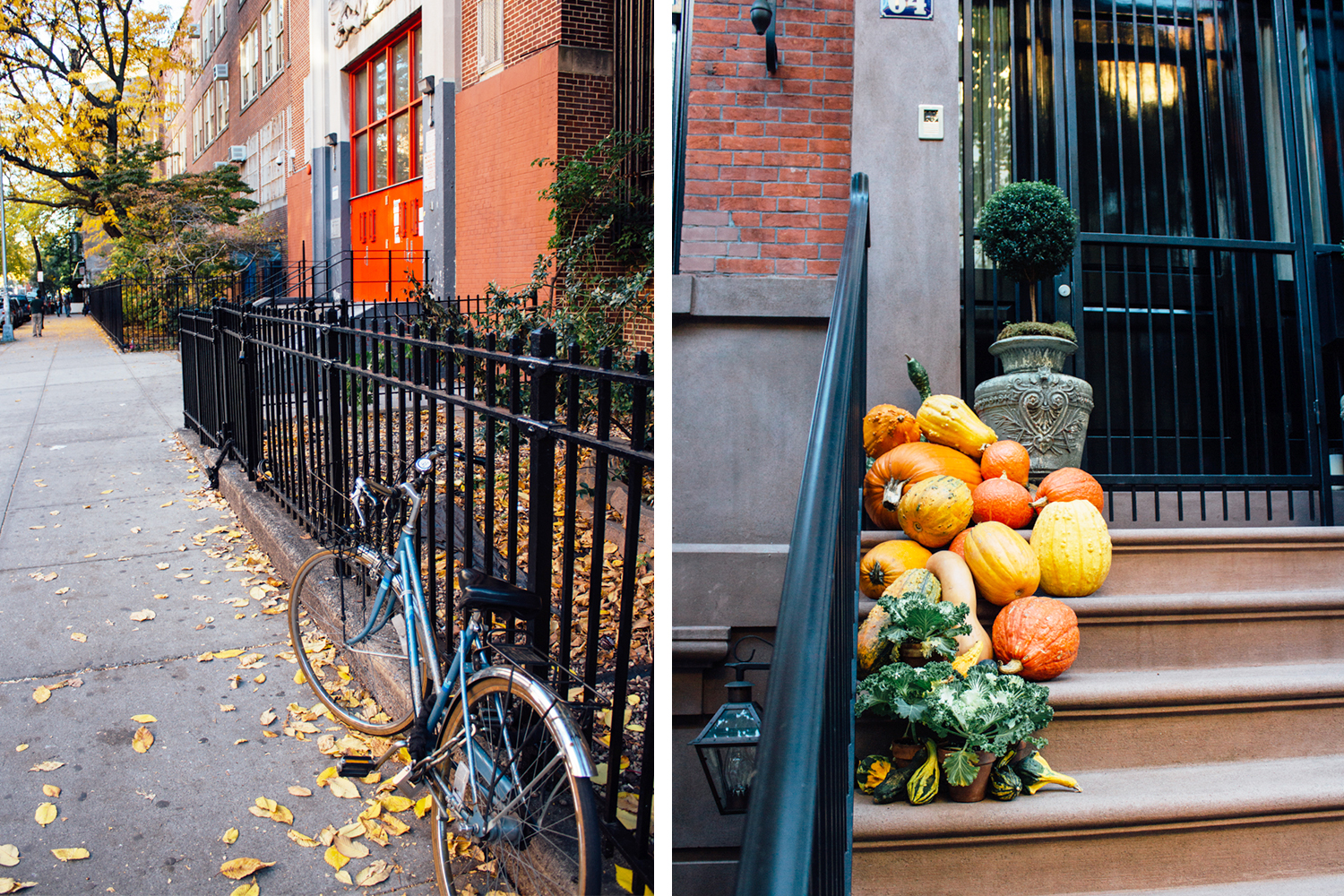 Our group ended up doing a good amount of walking, as we made our way through neighborhood blocks and more. We passed by a school with the typical red doors and steps that you’d see in plenty of movies. Some places even had squash sitting on their steps, or vegetables like kale growing from their planters. We went on to visit Vaute which is a really cute shop selling high-end cruelty free fashion. They already had their winter coats for sale, as well as some t-shirts and other items from their fall collection. If you’re looking for a warm, vegan coat in the city…these ones are really well-made and fashionable. We continued walking with leaves crunching under our feet as we made our way over to Blythe Ann’s, home of some of the best vegan ice cream I have ever tried. Next we went over to by CHLOE., which is a VERY popular restaurant among omnivores, despite being 100% vegan. I have been a big fan of Chloe Coscarelli, chef and owner of the establishment who won cupcake wars a few years ago. This place was packed, and the food was fantastic. Rumor has it that they’re opening a new location in the city soon, which is very exciting! 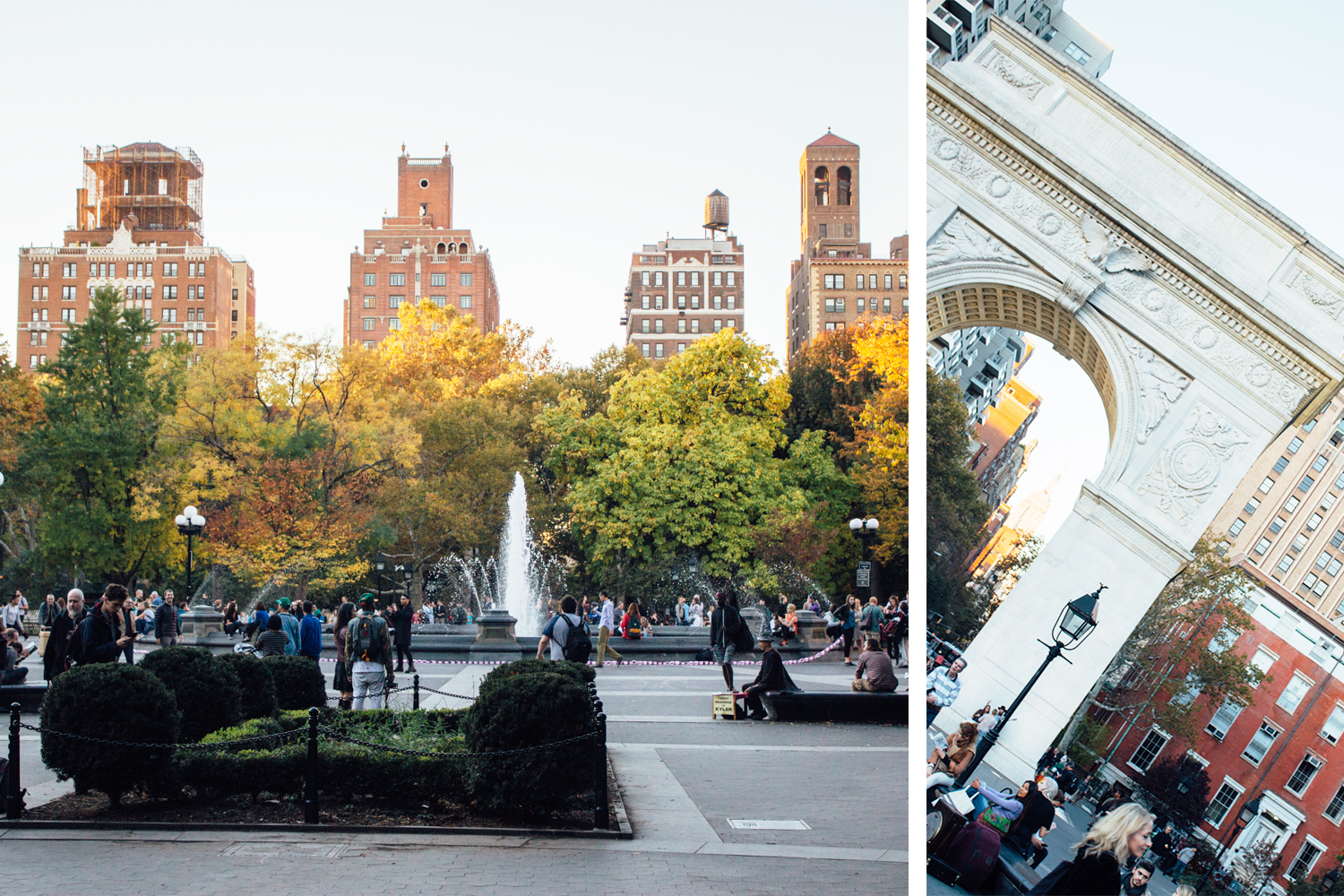 Not too far away was Washington Square Park, located right by the University. I can’t imagine how incredible it would be to go to a school like NYU with so many vegan-friendly businesses nearby. The little park was bustling with activity, from university students to families and tourists all gathering around the fountain. The colors of the fall leaves just added to the beauty of this park. We passed through here again later in the day when it got darker out, and there were still plenty of people there hanging out by the arch that was now lit up. It’s a completely different feeling hanging out by a college campus when you’re no longer attending school. The day came to a close when we visited Peacefood Cafe for a spectacular dinner including some raw lasagna, Caesar salad and a burger. This place had such a great atmosphere and the staff were very friendly. We brought dessert home, which we carried back on the subway on the way to the hotel. Overall, I have to say that the food crawl and tour of NYC went pretty well!

You can watch the full food crawl video here ^^ 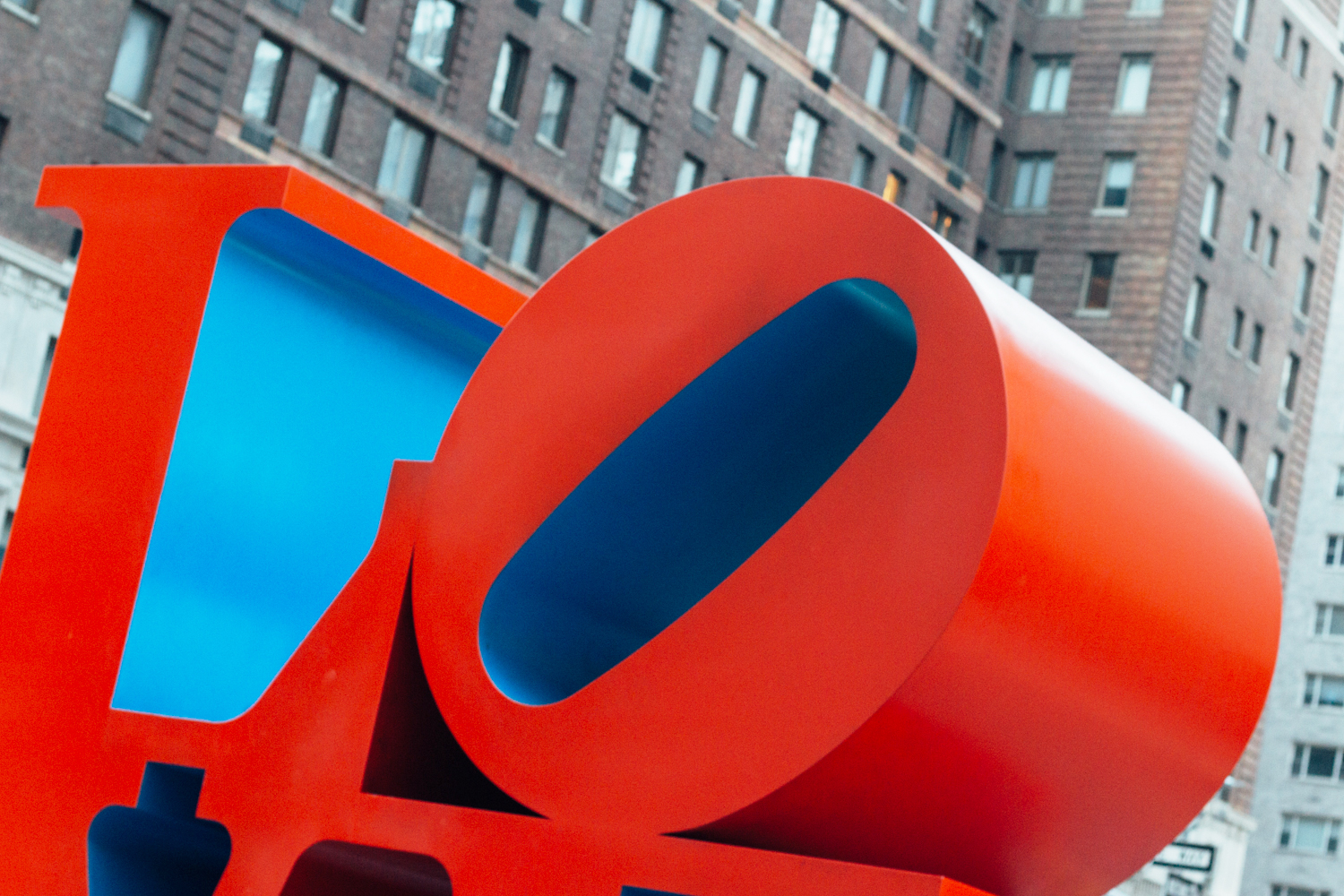 On my last full day of the New York trip, I spent most of my time alone as I walked around the area by my hotel and took photos like a typical tourist. I even got a chance to visit the MoMA, which as a designer and art-lover was something I just had to do before leaving. I got to see works here by Mondrian, Van Gogh, Pollock and even some lesser-known pieces from Saul Bass, Jamie Reid and Milton Glaser. Although I have to admit, if you’re in New York…you better know who Milton Glaser is since he created the iconic I Heart NY design that you can find in almost any souvenir shop around the city. I’m glad I got to visit the museum on my own because I was able to take my time and view the pieces that meant the most to me. Next time I visit New York, I will have to visit the MET Museum and the Guggenheim. Unfortunately there just wasn’t enough time on this trip, but there’s always more left for the next time I get to visit here. 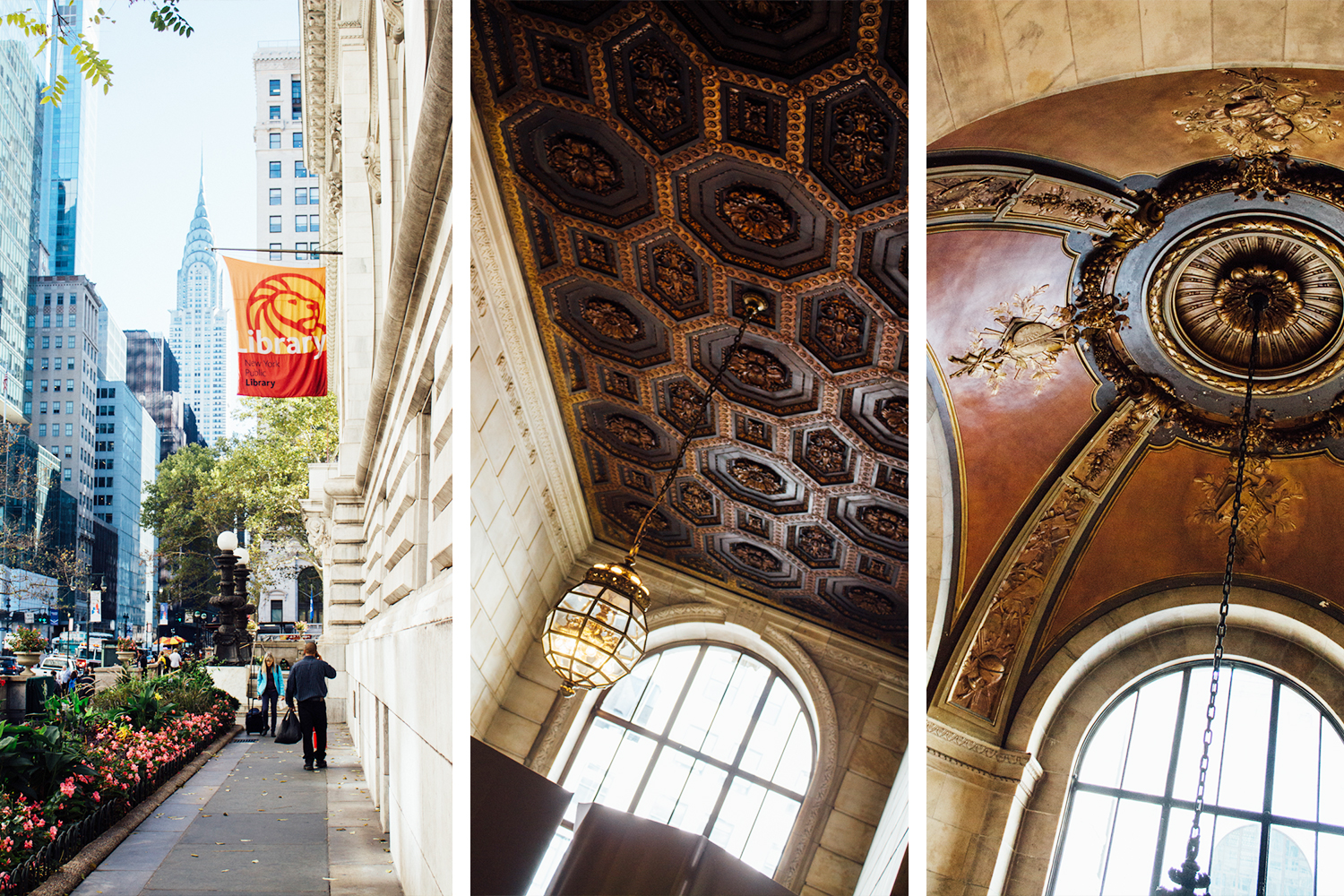 Also on my last day, I saw the New York Public Library. This places is beautifully decorated and full of history, and it was also right next to the Winter Village going on at Bryant Park. There were so many shops there, including art sellers, candle makers and a few vegan-friendly stops for food. I didn’t actually order anything, but I talked to the people at Marty’s V Burger (basically vegan Big Macs and other “comfort food”) and Kaleidoscope (home of the vegan macarons from Sweet Maresa’s and Lagusta’s Luscious confections). At the end of the day I was a little upset to be leaving soon, but overall I think everything on the trip went perfectly. I will have to visit New York again soon with either my mom or some of my local vegan friends. This place is a paradise for vegans worldwide, and if you happen to be one reading this…I hope you get to make your way to this wonderful city someday.