Malaysia on one meal a day 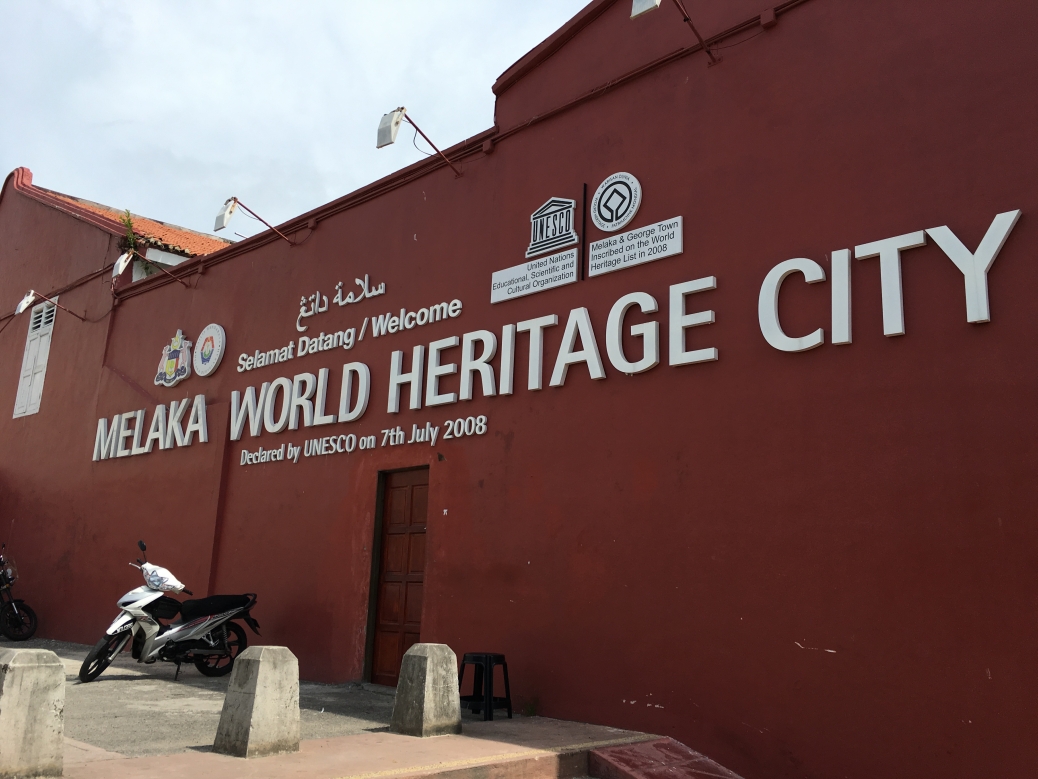 First, let me clarify that I ate more than once a day, it was just a lot of snacking and coffee. This was due to a combination of not wanting to spend a lot of money, lacking of vegan options I was able to find, and travel fatigue. Sometimes when I travel I can lose my appetite and just not want to eat a lot of food. But don’t worry, it always ramps back up again once I settle somewhere for a while 🙂 Does that happen to anyone else?

After finally figuring out my transportation out of Singapore, my first stop was Malacca (or Melaka) about half way between Singapore and Kuala Lumpur. Malacca is a UNESCO World Heritage City due to all the different cultures that have controlled the port town over the centuries. There is still quite a lot of evidence of the various cultures and quite a few museums to explore. I lucked out with a great travel deal and got a huge room at the Pines Hotel, just a bit north of the centre of town, for about $25 USD! They also had a free shuttle to make exploring the city easy. 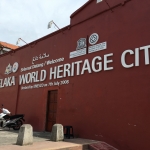 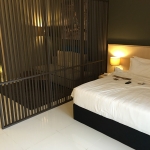 Huge room at The Pines 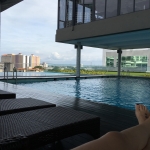 View from the pool at The Pines

I explored the older part of the city around and on the west side of the river and found a veggie cafe, which I went back to the next day, and a lot of temples of various religions. The further to the east side of the river has more of the modern city amenities, like a few malls and Starbucks. There are maps throughout the city with various suggestions of sites to see and even some self guided tour suggestions. Although I didn’t really have the time to follow any of them, they looked like they would be a good spot to start. 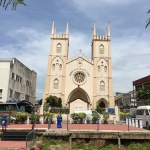 Something is not quite right… 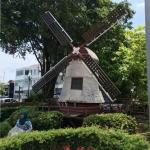 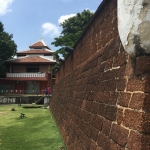 Some of the old fort wall along the river 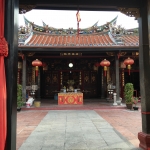 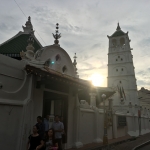 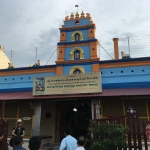 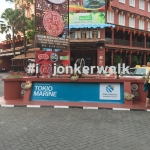 They have a few hashtags up around the city 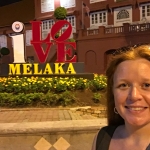 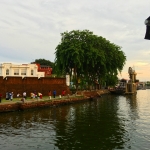 Relaxing by the river in Malacca

I only ended up eating at one restaurant here. I also grabbed a bundle of veggie ramen noodles I found at the corner store: 6 package for 1 USD 🙂 They ended up lasting me for a few days. But the highlight was the traditional Malay dish I had at Seeds Garden. Apparently it was from further north in Malaysia, but was delicious! It was Nasi Kerabu, a rice and veggie dish with some assembly required. The quality of the ingredients was amazing and you could tell there was a lot of emphasis on it. 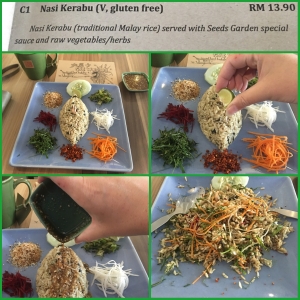 There seemed to be quite a few vegan restaurant options around town, according to my research. Sadly, most of them seemed to be in the Eastern part, closer to the shopping district. Unfortunately, it was a bit far from the drop off point of my hotel.

After a day and a half exploring, it was off to Kuala Lumpur! The only thing I knew I really wanted to do there was go up the Petronas Towers (nerd alert). I also wanted to head up to the Batu Caves north of the city. After arriving late and getting a good night’s sleep, I was able to knock those two off pretty quickly. I spent the day being a tourist with a couchsufer who was in KL for a few months for work. 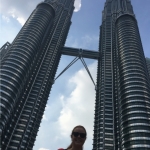 Standing in front of the Petronas Towers 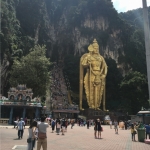 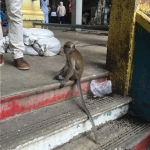 As sweet as the monkeys look, they will try to steal your stuff! 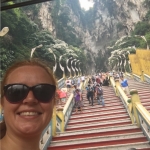 I survived the stairs! 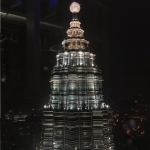 View from the top of one tower to the other 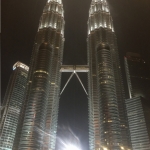 The Petronas Towers at night

We used Uber and Grab to get around town, which was super convenient. While most people probably know Uber, Grab was new to me. It allows you to input your origin and destination and it will quote you a price for a taxi. It’s really handy for knowing the price before getting in the car.  It’s apparently available in quite a few countries in Southeast Asia: Singapore, Malaysia, Indonesia, Thailand, Vietnam and the Philippines.  The trick was that you might needed a local-ish phone number 🙁 Oh and cash to pay the driver since the app doesn’t charge you directly.

Another great find in the city (or actually out of the city) was the French Village.  This is not an actual french village, but a replica for a resort.  Think Disney meets Colmar.  A very cool and unexpected side trip in Malaysia. 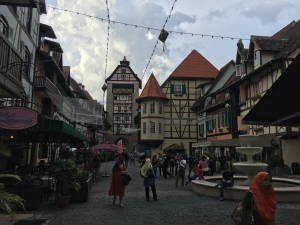 Now here is the first time I ran into a problem with ordering food.  I had looked online for a place for lunch and found the Woodlands Vegetarian Restaurant.  I remembered something about a restaurant with “wood” in the name, and google gave it good ratings, so we checked it out.  It was an Indian restaurant so I though everything would be fine and I enjoy Indian food.  However, when I asked the waitstaff which items didn’t contain diary (I’m still not sure on all the different elements) I was assured that what I ordered didn’t have any. Then I got my dish with what I’m pretty sure was paneer, aka cheese. I asked again and was assured there was no dairy. At this point I ate what I knew was okay and left the rest.

After, we ended up going to an middle eastern restaurant and stuffing our faces with hummus, falafels, veggies, and bread. My new friend was surprised I knew what hummus was… clearly not aware that vegans basically live on the stuff!  Sadly I can’t remember the name, but it’s in the Pavilion mall on the top floor.  Delicious but expensive! 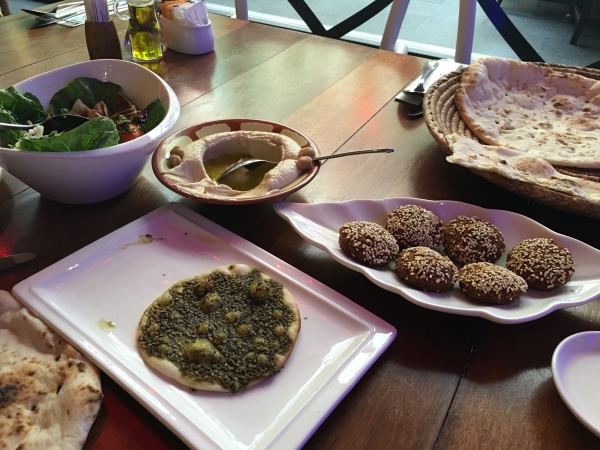 The next day, I ended up getting my meal from the food court at KLCC. I ended up at Simple Life, a vegan place hidden in the back, with a super healthy looking menu. I had a dish similar to my first one in Singapore, spicy broth with tofu and veggies. It was a huge portion and I didn’t quite finish all of the broth! 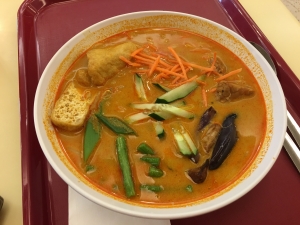 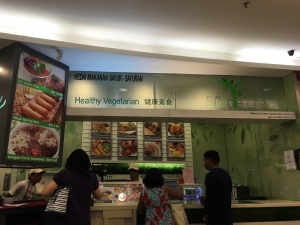 Moral of the Story

I’m sure there are a lot more options in Malaysia than what I found during my time there. The traditional Malay food did seem to contain quite a bit of meat, but there were also a lot of rice dishes. I also know there is a vegetarian Malaysian restaurant at home, so I’m sure it’s possible!

Wrapping up with a few tips:

I didn’t get a chance to make it to any of the beaches or northern part of Malaysia, which I have heard people rave about. Maybe next time 😉