A Day in Dubai 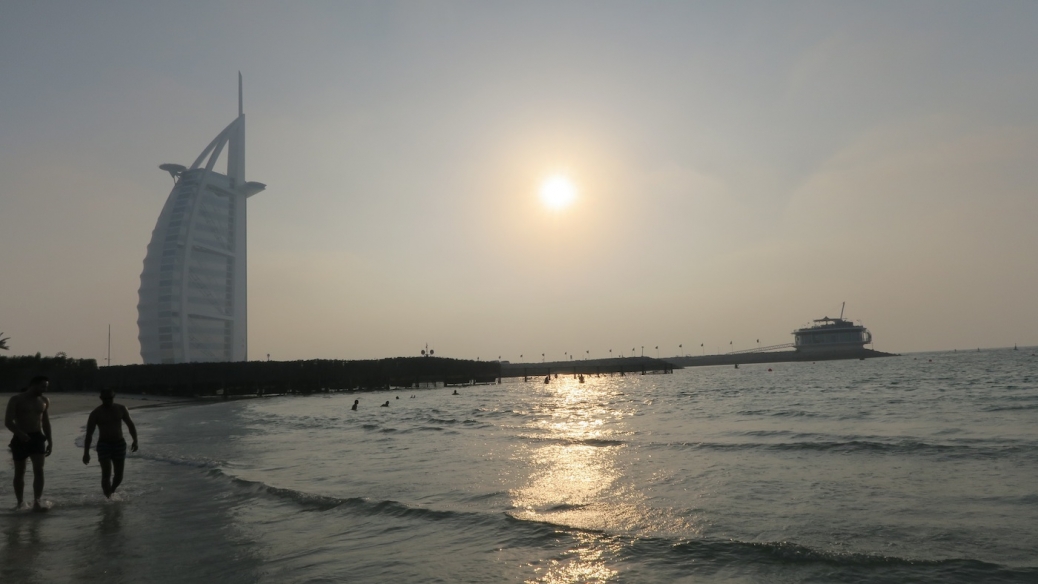 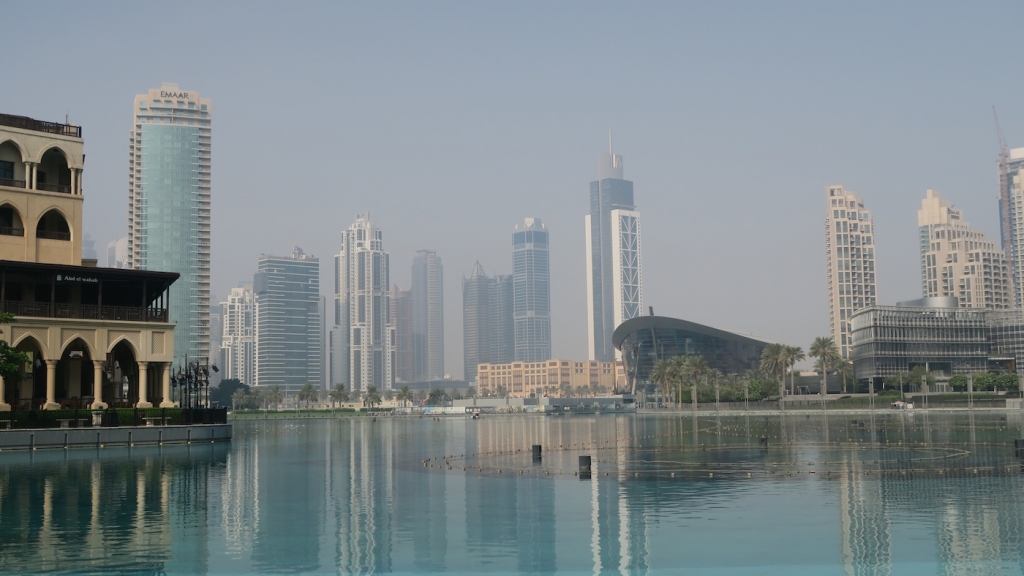 I never really thought I’d visit Dubai. I’ve heard about it intermittently by way of travel and/or discovery shows over the years, but wasn’t particularly drawn to it as a destination.

As I was working with Green Earth Travel to coordinate my long trek from Dublin to Auckland, the question of a good mid-way point came up. The options presented to me were Singapore and Dubai, with the Singapore option taking a bit longer and having an extra layover. The Dubai to Auckland flight would be non-stop. So, I opted for that one.

Luckily, after booking the flight, I learned that my host in Auckland has a brother who lives in Dubai and offered to put me up for a couple of nights. So it worked out perfectly!

I hopped on a seven hour one-way flight from Dublin to Dubai, arriving early on a Friday morning. The first full day in Dubai was lost on catching up on sleep and being a little nervous to go exploring on my own. My hosts lived a bit outside of the city, I didn’t have a car, and taxi cabs there are quite expensive. I opted to instead take it easy on Friday, get some work done, and hang with my new hosts.

That left one full Saturday to do some exploration.

According to my hosts, the best option—particularly because the heat is so unbearable and it can even be dangerous to be outside for too long—was to check out one of the biggest tourist attractions in the world: The Dubai Mall. 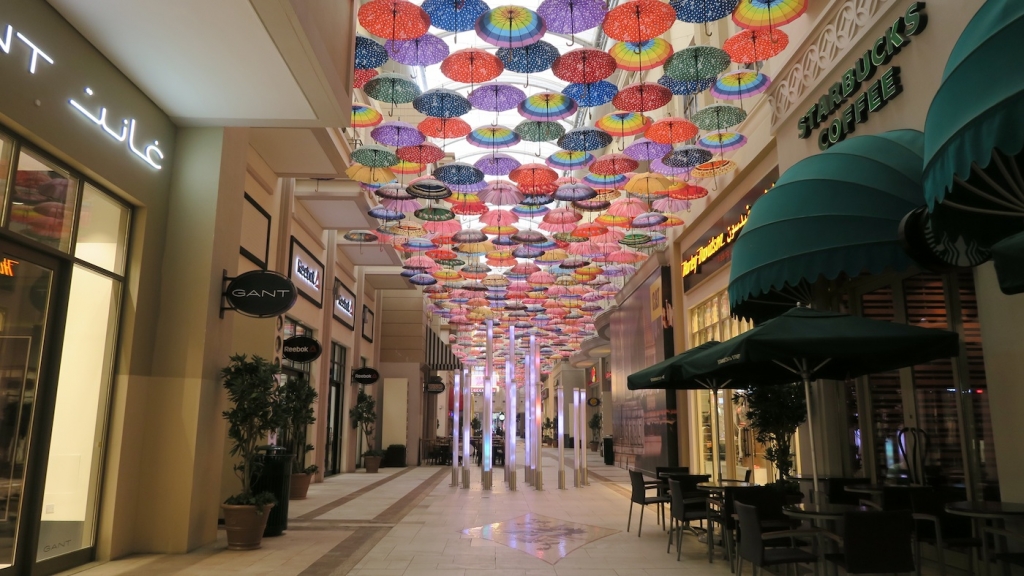 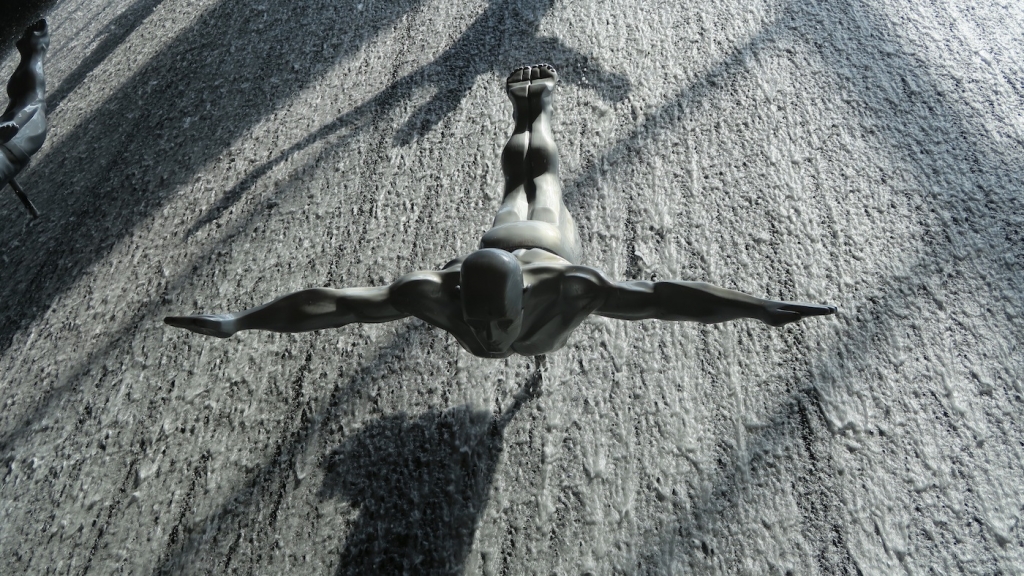 They dropped me on their way to work that morning and I spent a good 5 hours with my jaw agape as I meandered around the world’s largest mall.

Somehow I didn’t get many photos, but there’s a bit of it on video here.

Inside the world’s largest mall is in fact ONE totally vegan restaurant (it’s also fully raw). Be Super Natural (found on the second floor inside an area called “Galleries Lafayette”) has a rotating menu of healthful nachos, pizzas, burritos, and sweets, freshly pressed juices and smoothies, and they’ve got a line of their own packaged products like kale chips, granola, and nut butters. 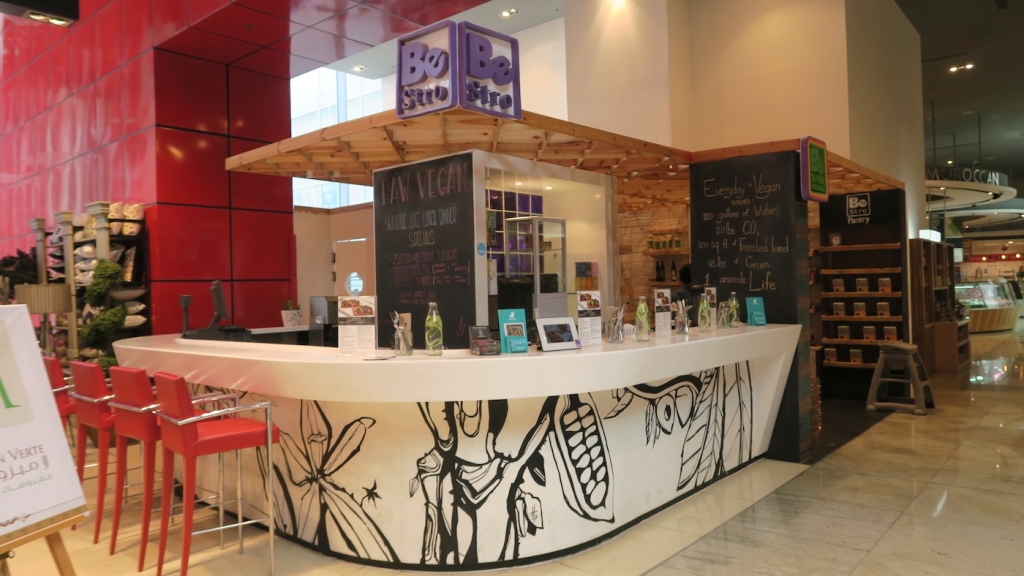 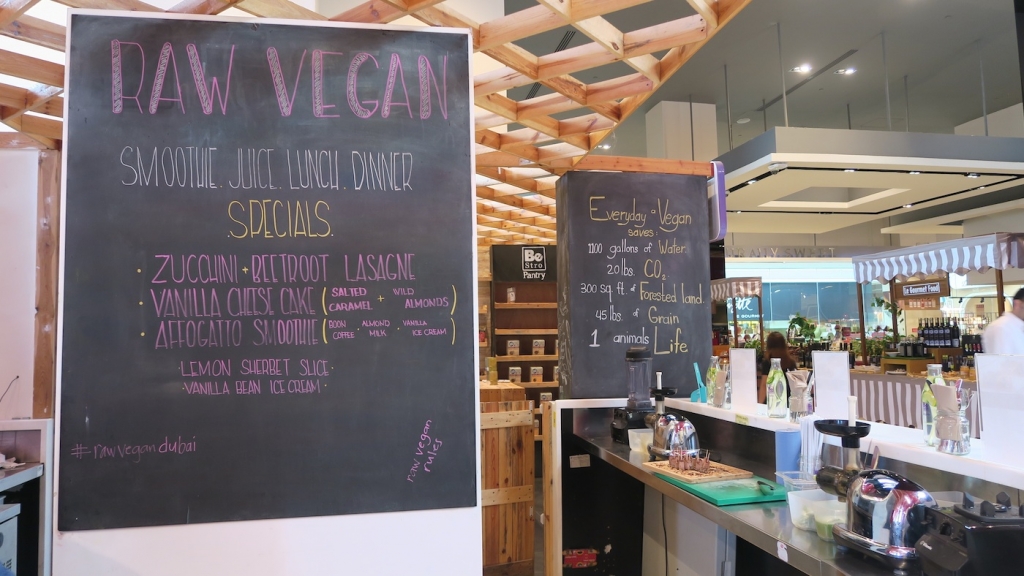 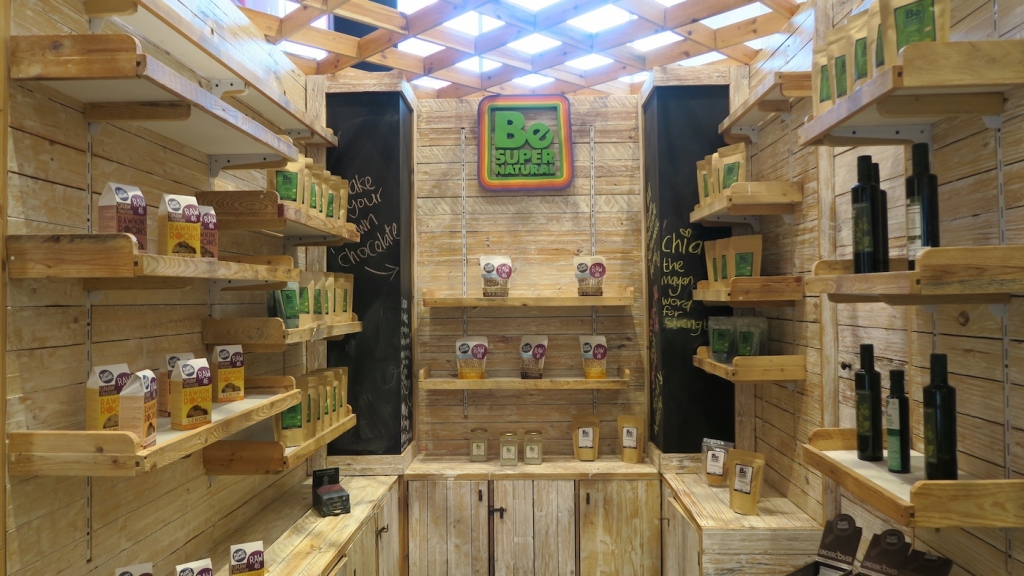 Alongside the world’s largest mall (like, literally right next to it) is the world’s tallest building: the Burj Khalifa! In fact, you can buy tickets to go up and see it from within the mall.

PRO TIP: It costs less than half as much to go to the 128th floor as it does to go to the 148th floor (that’s the furthest up they’ll let you go). If you’re not worried about a measly 20 floors and/or are on a budget, you may wish to opt for the more affordable route.

I didn’t go into the Burj at all because I couldn’t justify the cost, but I suspect it’s actually quite great. 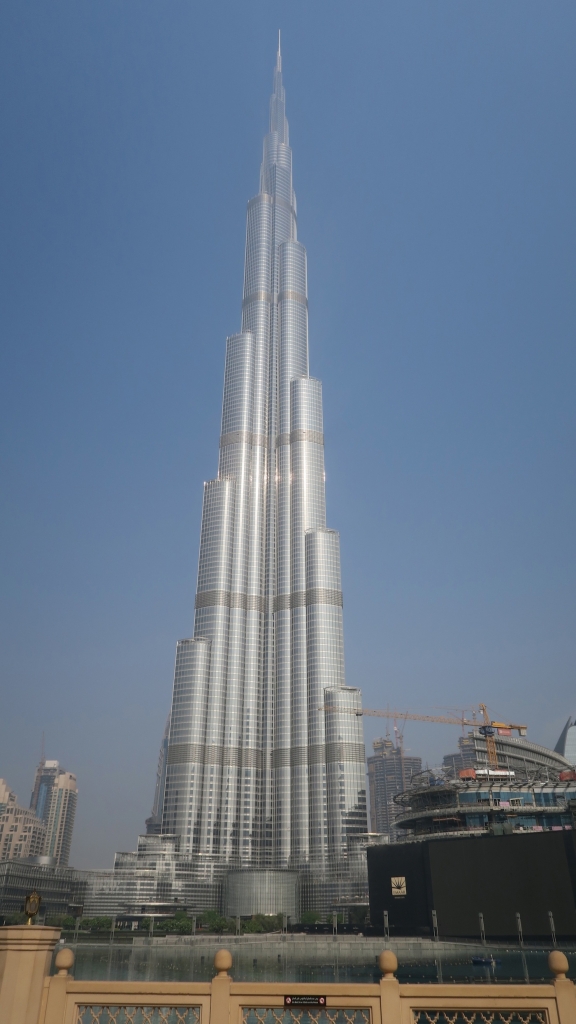 See the water at the base of the Burj in the photo above? It’s hard to tell in the pic, but that’s actually the world’s largest active fountain show! Starting around 7PM the fountain show begins and runs every 30 minutes. I’ve heard it’s quite elaborate but sadly I didn’t stick around to see it for myself.

Per some local vegans I learned that there are a few other places in and around the mall that are great for vegan foodie options, including Ping Pong, Le Pain Quotidien, and Argo Tea.

After spending far too long in The Dubai Mall, I took a taxi to the neighborhood of “Jumeirah 1” for a vegan-friendly restaurant that came highly recommended by a local vegan: Comptoir 102.

This place is unique in that they also define themselves as a “concept store,” featuring custom jewelry and unique display-only furniture, select fancy garments, and even footwear that you can browse through before or after your meal in the cafe section. 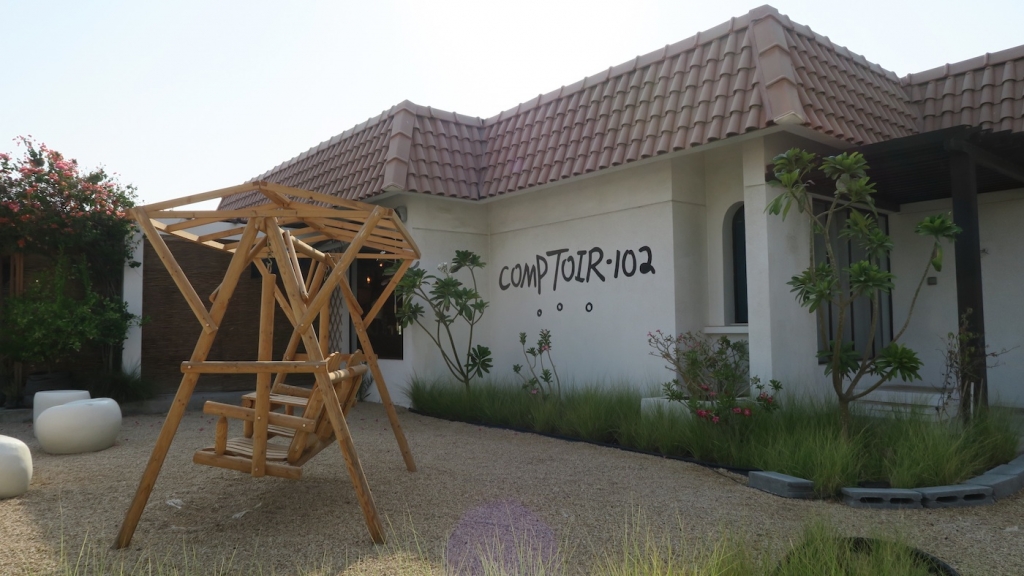 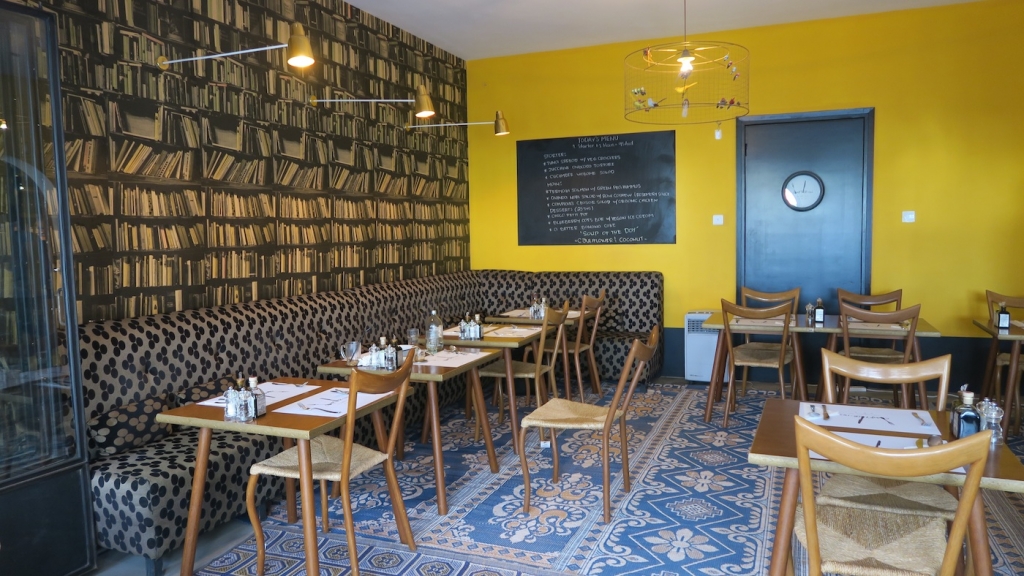 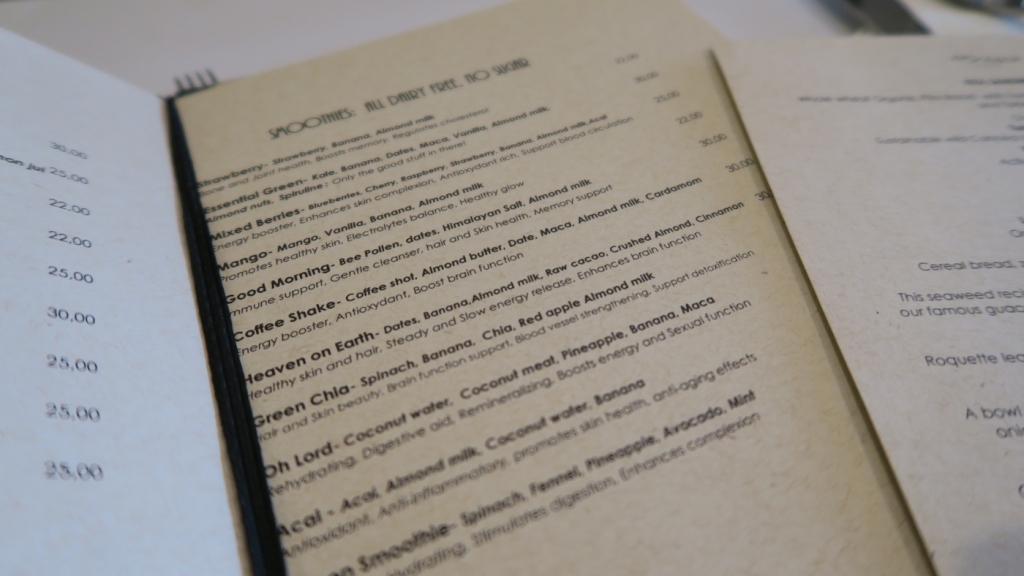 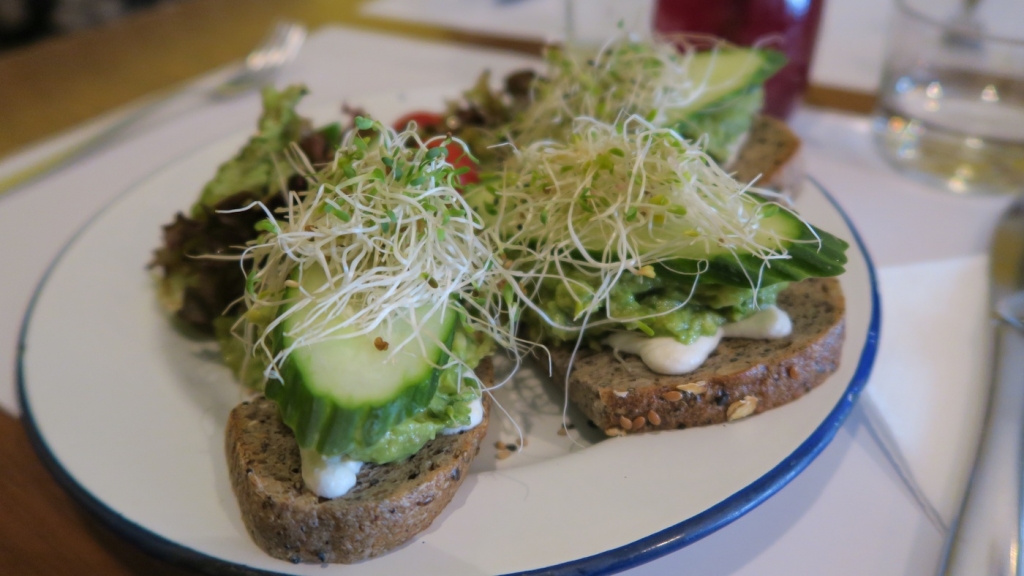 Outside of the juice and smoothies I think I counted 2-3 vegan options on the menu, including the Avocado Crostini (gently toasted bread topped with home made fluffy macadamia sauce and alfalfa sprouts, guacamole and cucumber slices; served with house salad). It was delicious and quite filling. I also enjoyed the Skin Glow juice (pomegranate, cucumber, apple, acai).

Outside of the two places listed above, the following was also suggested by some locals:

I also searched online while there and a few other places came up, though I didn’t take note of them at the time as they required a vehicle or a long public transit ride to get there. But you’ve got the resources here at your fingertips! Remember to do some Googling around before you go, and…

I always private message vegan Facebook groups when I’m looking to meet with local vegans or ask about the best vegan food finds in certain cities. There’s a vegan Facebook page for a LOT of cities around the world. Don’t be shy, get to it! It’s one of the quickest ways to learn about the best and sometimes hard to find vegan goodies in the cities you may wish to visit! 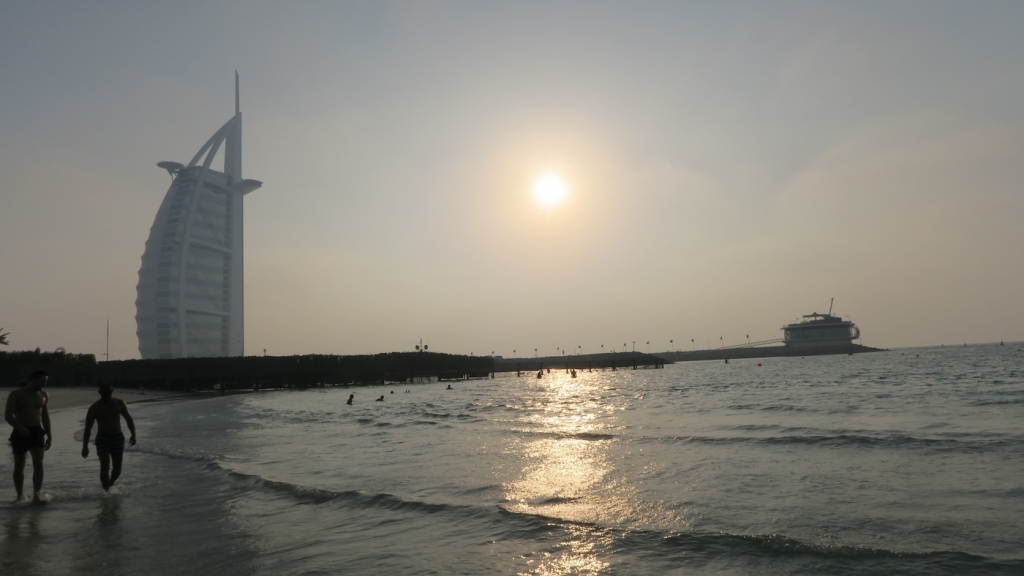 ^Pictured above is the Burj Al Arab—recently named one of the most luxurious hotels in the world.

Overall, Dubai seems like a neat tourist destination if you’ve got some cash to burn and you like clothes and product shopping. Pretty much everyone I met there suggested walking around the various malls (there are more than SEVENTY (!!) malls in Dubai). It’s so hot outside that people rarely hang around out and about.

There are other touristy things to do like going in a dune buggy, and of course exploring outside of the proper city areas. I’ve heard while it may be less accommodating to tourists, it’s worth seeing what’s outside of the crazy glamour that contains some of the world’s largest and most elaborate structures.

I found the Dubai resources on NomadicMatt.com quite useful.