What if Meat Was Illegal? 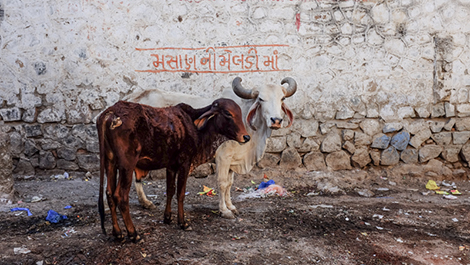 At first I thought it was a just a legend. I had heard of it in a late night conversation with a fellow volunteer at an elephant sanctuary in rural Thailand. Somewhere in India, the story goes, is a city where meat is against the law. Within the city limits, no meat is bought or sold, and no animals are killed, or kept captive for the purpose of eventually being killed. The world’s first 100% vegetarian city. Could this be real?

From what I know of India, this could easily be true, or a myth. I’ve seen things here with my own eyes I can still hardly believe. And I’ve heard even more that stretches the limits of what I thought possible: nomadic, cannibalistic religious sects, men who survive without food or water for months or years, or who swallow condoms like pills for birth control, not to mention the flying monkey god…

But I was on my way back to India, so I decided to find out for myself. As I haven’t eaten a bite of meat for 25 years, I decided if there’s anywhere I could go for my own personal pilgrimage, it was Palitana: the world’s first vegetarian city!

My research only turned up a few tidbits. Palitana was declared a vegetarian city by the local government in 2014, after a hunger strike by local Jain monks. While it is a holy site for Jains — who are entirely vegetarian — the city itself is about 75% Hindus (also mostly vegetarian) and 25% Muslims (definitely not vegetarian). And that’s about all I found. So how did this actually work? Did it work? Was this place a utopia, free from suffering, overflowing with fragrant blossoms, and somehow also cleaner, more peaceful, and less crazy than the rest of India (in my unrealistically hopeful mind)? Or was there massive resentment about the restrictions? Has the experiment failed already? I hopped on a sleeper bus north to Gujarat state, and soon I’d find some answers. I’d spent enough time in India, however, to know they probably wouldn’t be the answers I expected.

A river crossing on my way to Gujarat. The road on the left leads to a funeral pyre on the banks overlooking the water.

So what did I find? Well for one, it’s definitely not cleaner or more peaceful than the rest of India. It’s a small city, more of a town even, but like the rest of India, the infrastructure is bursting at the seams. The space is packed. During rush hour people on foot, bicycle, motorcycle, car, truck, and rickshaw all jostle for position in the narrow streets, filling the air with the sounds of engines and continuous honking, with dust and exhaust, mingling with burning garbage and raw sewage, forming a thick, choking blanket over the city. So far, typical India.

Meeting the people there, who were overwhelmingly sweet and friendly, I felt as though I was visiting the past. I saw: people hand-forging iron farming tools, using turn-of-the-century cotton gins, shoe-shiners set up on piles of dirt beside the road, straight-razor barber shops, early morning ice block delivery… I visited school classrooms with no chairs, and spoke to students of all ages who uniformly still believe arranged marriage is far superior to this new-fangled thing called “love marriage.” Tradition is very important in India, and doubly so in rural India.

A local tailor, using a foot-powered sewing machine, in his tiny shack workshop.

As for the animals? Well India is a harsh place for everyone. And, like animals elsewhere in the world, their existence, and their suffering, is largely ignored. Whether it’s the “revered” cows, the stray dogs, or the feral pigs, they all have to fend for themselves — which means trying to avoid getting hit by cars, and eating garbage to get by. Sure, they don’t have to worry about someone killing them, but that’s about the extent of the mercy shown them. The dogs are all unneutered, mostly malnourished, and wandering the streets with untreated wounds and chronic health problems. Bulls, buffalo, and horses are used as beasts of burden, pulling plows, carts, or carriages full of tourists. Cows and buffalo are used for dairy, enduring miserable lives in deplorable conditions, as I documented in this video. Don’t get me wrong, it was a nice break from the rest of the country — and from my time in SE Asia before that, where animals are slaughtered in full view, their bodies strung up and for sale on the sidewalks, in the markets, and at the restaurants. But one of the hardest parts of traveling as an animal lover is the heartbreak of seeing so many suffering animals, and not being able to help them. In that regard, Palitana was not much different.

I knew my utopian vision of the city was overly optimistic, but why was it this bad, in the one city that’s supposed to be an example to the world of respect for animals? From my view it comes down to three reasons:

One: Vegetarianism has its limits

Jain philosophy teaches ahimsa, or nonviolence toward all living creatures. Jain monks are said to brush tiny insects out of the way before taking each step. I even remember hearing about this practice as a teenager, when I first began exploring ideas of nonviolence and pacifism. However, for a variety of reasons (outdated reasons in my opinion), Jainism still allows dairy consumption. Based on this technicality, the cows, buffalo, and goats in Palitana are all still being exploited for their milk. This process results in inevitable suffering, due to economic constraints as well as biology. In order for the female cows, goats, and buffalo to produce milk, they must first have a baby (like all mammals), and in order to make money selling that milk their babies must be taken away from them. There is no way around this cruelty, not on any commercial scale. But the old Jain idea that getting milk from a cow doesn’t require killing them misses this reality.

One of the sweet babies I met at a dairy operation. I shared her story in “The Buffalo of Palitana.”

The best way I can explain this contradiction, between the intent and practice of Jainism, is what a Christian friend of mine described as “faith vs religion.” In his view many Christians are religious, but have no meaningful faith in God. They follow the rules of the church, out of habit or social pressure, but don’t make an effort to really understand what it means to be a good Christian.

This stuck with me, and I think this kind of dogmatism is something to which we are all susceptible. Are my choices based on principle — on critical thinking and a commitment to compassionate action? Or are they just blindly in line with those approved by my religion, my culture, my family, or my peer group? Even as a vegan I must be careful not to just unthinkingly do what is “vegan-approved.” On the contrary, in order to reduce suffering and increase joy in the world, every decision requires that I educate myself and think critically about my beliefs and the world around me.

While I believe this is starting to change, unfortunately Jain philosophy seems to be largely based on ancient traditions. While at its core it has some extremely valuable principles, the cruelties of modern dairy production are clearly at odds with its original, nonviolent intentions. Like any of us, if we don’t reassess our principles, and how they relate to a changing world, they will increasingly fail us.

One explanation is simply that India is a harsh place. While there is a vast range of inequality, between the ultra-wealthy and the destitute poor (and the animals below them), it’s not an easy place for anyone. A common response I get when talking about the animal suffering in Palitana is that the people exploiting animals are just trying to get by, and that I’m judging them unfairly.

But it was never about judging people in the first place. To judge people, or get defensive about it, misses the point entirely. The conversation shouldn’t be “how can we ensure that poor people can keep their jobs exploiting animals, while producing unhealthy and unsustainable foods?” But rather, “how can we 1) ensure that everyone has adequate nutrition and economic opportunity, while 2) shifting our consumer habits and food systems so as to avoid unnecessary cruelty and ecological catastrophe?” A shift toward plant-based foods is win-win-win, for animals, human health, and the environment. Such a shift requires that people adapt, but like the former meat sellers in Palitana who are now happily running clothing stores and the like, we will all manage.

The main indoor market in the city’s center, filled with nothing but fruits and veggies.

No, Palitana isn’t a utopia, but it is a fascinating social experiment. From a human point of view I was actually surprised at how successful it was. I heard none of the resentment I was expecting.

My major takeaway was that a meat-free world is completely possible, but that animal welfare rules and regulations have big limitations. First, they’re only possible when a certain threshold of the population supports them; and second, they’re only effective when underpinned by a shared commitment to ending suffering. Without getting into talk of paradigm shifts and evolving consciousness, the reality is that rampant animal exploitation and abuse will only end when we collectively commit to transforming our relationship with animals. This shift is huge. But I have seen enormous strides in recent years. When I went vegan 24 years ago I was a weirdo even in my small town hippie community, and one of the only ice creams I could eat was called “Ice Bean.” Gross. But now the idea of veganism is rapidly becoming mainstream, and plant-based alternatives are cheaper, more available, and — trust me — 100 times more delicious than ever. There is boundless potential for change. We just need to make sure we don’t reduce veganism to a kind of faithless dogma. We need to remember the heart of veganism is reducing suffering and spreading joy in the world.