I have been to Italy a couple of times before, but my boyfriend has never been and hence this had to be rectified- you have to taste pizza and pasta in Italy at least once in your life! For his Christmas present I brought him a holiday to Italy (I am amazing I know! And definitely not selfish in anyway, just because I want to eat the most amazing pizza in the world). We travelled to Rome for three days, Naples and Pompeii for a one day trip, and then I continued to Padua for an astronomy conference by myself for a week.

In Italy there are water fountains all around the city, so bring a water bottle with you so you can have free (clean) water!

Rome is relatively easy to eat vegan food, you may get weird looks, rolling of eyes, and asked “but surely you eat eggs or cheese?!” Or in one case when I went into a shoe shop and asked if they had any shoes without leather, and I received a reply saying “No leather….but you eat meat, right?!”!

There are vegan gelato shops, and in the normal ice cream shops there are normally a few flavours of soya ice cream!

We tried Fatamorgana, they have a few shops around Rome. They have strange flavours like chocolate and tobacco (not vegan) so I definitely wanted to try them! I had a chocolate one and a hazelnut and myrtle, which were both nice, the chocolate one was nicer and I have had better soya ice cream (see below).

The next place we tried had 6 different soya flavours, and the nut one was the best ice cream, it was amazing, and the pistachio was ok but not as tasty, the place was called Il Gelatone.

We also tried Grezzo, a raw vegan chocolate shop, and even though it was slightly pricey, it was worth it. We had chocolate 70% ice cream, and a hazelnut and chocolate ice cream, raw chocolate brownie and a 80% chocolate truffle-amazing!

I was recommended to try the Termini Station Il Mercato Centrale Roma, and to try the pizza and bread from the famous (in Italy) chef Gabriele Bonci at Il Pane e i Dolci. The pizza was really good, we tried a tomato and spinach one (I dream about this one), and an avocado and potato one (ok). We also tried the artichokes alla romana, which were also very good. I would recommend this place because there are many stores and different things to try. We also tried the vegan bean burgers from another shop and these were really good (just opposite this baker/pizza place).

Another great place was Aromaticus, we were really hungry by the time we got here, so either the burgers tasted amazing because they were great or because we could of eaten bark and been happy! The bean burgers were gorgeous, and the place is very relaxed and chilled, with plants on the table and a play area for children!

The next place we found from HappyCow and was called Ecru. We had the breakfast option and for ‎€16 was not too bad! We had coffee, hazelnut milk hot chocolate (yummy), homemade bread with hummus and vegetables, cashew yoghurt with muesli. We also had raw heart-shaped chocolates. This place was good, slightly hard to find, but quiet and nice inside! 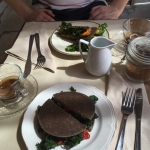 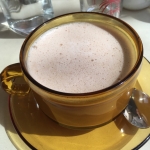 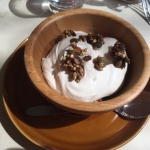 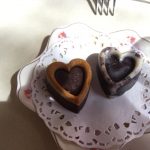 While in Rome we went to the Vatican, this is a must to see the Sistine Chapel. We did two free walking tours around Rome, the best one was Rome’s Ultimate Tour (http://romesultimate.com/free-walking-tour/), I learnt much more on this tour than the other tours I have been on. We went to see the standard tourist sights-Roman Forum, Colosseum, Trevi Fountain, Pantheon, Spanish Steps, Capitoline Hill. These sights are always amazing and full of tourists!

Make sure you book the Vatican City tickets in advance, especially in the tourist months, or else you can expect to spend hours in the queue! Last time I was in Rome I spent three hours in the queue, even though I arrived at the queue at 5am!!!

Also, if you buy a Roman Forum ticket, it includes the Colosseum as well-a bargain at 12 Euros! 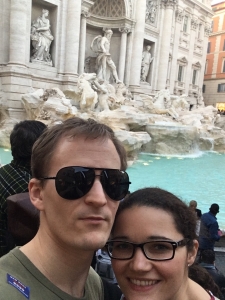 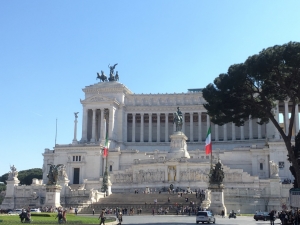 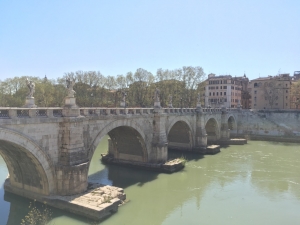 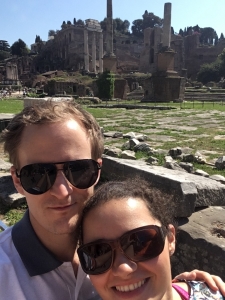 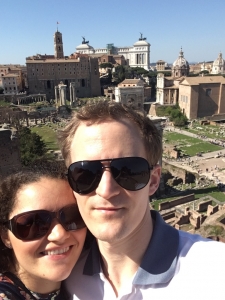 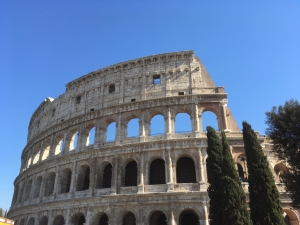 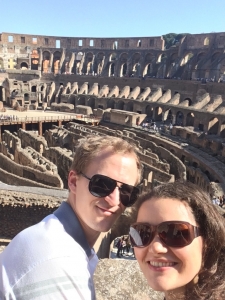 Being vegan in Naples is achievable, because you are most likely going to Naples for the best pizza of your life (I am not exaggerating it is the best pizza of my life). Every place will serve a vegan pizza called Marinara (tomato, garlic and basil or something similar), or you can order a grilled vegetable and cheese pizza, and order without cheese-you may get weird looks though.

The last time I went to Naples I went to

and had a Marinara (they have one with tomato or one with cheese-simple) and these pizzas are incredible!

This time I went to

and had a Marinara. It was really good and on par with Da Michele! The pizza below costs about €5

The next place was

Again I had Marinara, and while it was good pizza it was not as good as the other two places! The base and crust were not as soft, also when we were waiting for the pizza we saw one of the chefs smoking over the pizzas! But the pizza was €2.50!

The next stop was Pompeii and I was glad to be wearing trainers-there is a lot of walking! Pompeii is always a fascinating history lesson, last time I went to Herculaneum but this time we did not have time. I prefer Herculaneum because there are fewer tourists and more of the items are still here, whereas in Pompeii most are in a museum in Naples!

In Pompeii the prostitute house is always popular! There are the casts of dogs and people covered in ash-although they are now just moulds. “Have” means welcome in Latin, and you can see this on the tile welcome mats.

On the trains between Naples and Pompeii be very careful of pickpockets, and I know everyone says this but on the train in front of me a couple from the US were talking to a local Italian man. The man left on the next stop and 2 seconds later the man realised that someone had stolen his phone that was tied to his trousers in a zipped pocket! 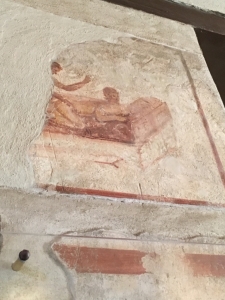 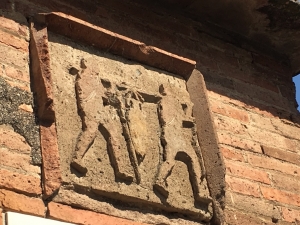 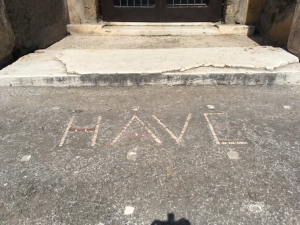 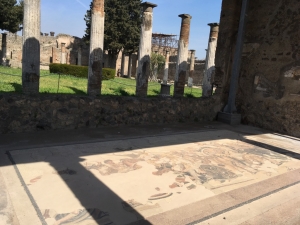 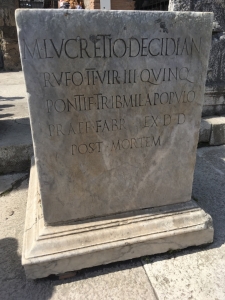 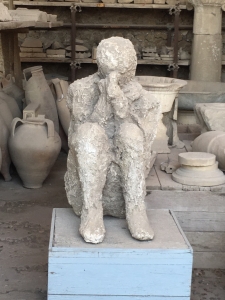 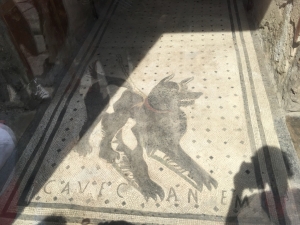 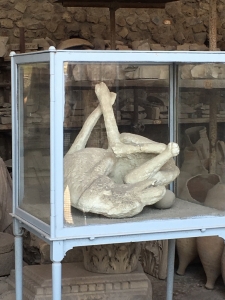 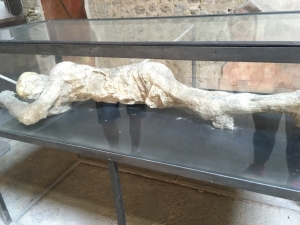 2. Gabin Gusto Esclamativo, they had amazing stools with cork seats! They do not have vegan options on the menu (including the pizza that has milk in it), but I ordered a warm salad with artichokes, tomato puree, pumpkin cream (vegan) but without the cheese. I ordered an extra salad which I thought would be free to compensate for the no cheese in my salad but this was not the case, and my lunch was €21! It was tasty food though!

I went to another restaurant and even though they did not have vegan food, I saw that they had a buffet with vegetables, so I got them to make up a plate full of vegetables that I picked-it worked and was really tasty!

Padua was extremely beautiful, but because I was at a conference I could only sightsee for one day. 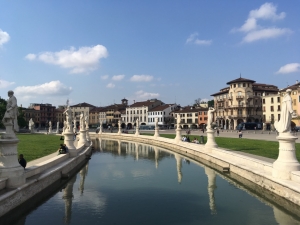 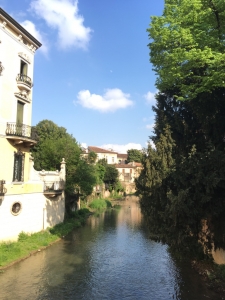 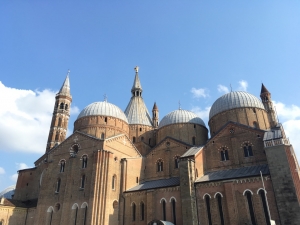