If you’ve watched Narcos, you might not place Colombia at the top of your travel destination list, and that was my mistake. But when a family member recommended we visit that country I realized that it brings together some of my favorite travel interests – the magnificent Caribbean beaches and the rainforest. And not only that but seeing the pristine Amazonian jungle for the first time in my life. Being vegan in Colombia was not only easy but made our travel so much better!

Preparing for travel necessitates some research and thinking. For me, one main priority is not causing harm to any animals during my travels, and focusing on ecotourism and sustainability. It means not only eating a plant-based diet as I always do (the best way to decrease environmental impact), but also considering how I interact (or rather not interact) with any native animals I meet. More about that later.

I was very pleased to see that some of the places we wanted to book offered vegan food, and others replied that they would accommodate us. I read vegan travel blogs about Colombia and checked Happy Cow for vegan restaurants. As usual, we packed travel size plant-based milk, vegan cereal, homemade rich granola, roasted almonds, and power bars, just in case.

Due to a last minute flight cancellation, we stopped in Bogota for one night. Arriving there in the evening we ventured into the Usaquén foodie district. Using the Happy Cow app we found Boho Balance which at that time of day offered only one vegan dish, an apple soup which was very refreshing and unique in its flavor. More invigorated we continued our food expedition. A restaurant owner overheard us trying to explain to the staff in broken Spanish what vegan food is, and kindly offered to help us. She took us to a Mediterranean restaurant nearby and introduced us to the friendly owner of El Mundo de Andrei. We were delighted to see the word Vegan on their menu! To be on the safe side we emphasized that we don’t consume any animal-based products and ordered vegan riso d’inverno vegetariano, a veggie risotto which really thrilled us! It was followed by endless complimentary rounds of sweet infusion tea with tiny apple cubes and mint. On our way out, we were graciously handed a few packages of tasty breadsticks. 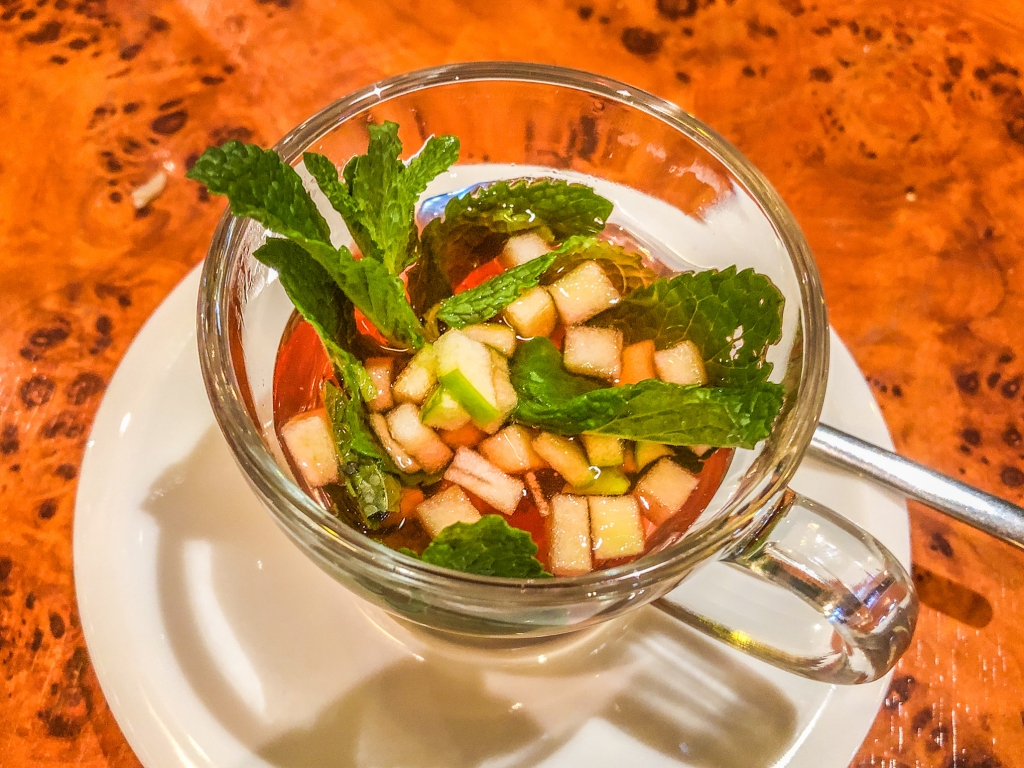 Next stop was Leticia, a small border town on the Amazon river, from which we took a 2-hour boat ride to Puerto Nariño – a small indigenous eco-village. Our first hike was an evening-night walk into the rainforest. Covered from head to toe to avoid mosquito bites, braving the heat and humidity, we headed to the muddy hills of the jungle, wrapped in total darkness except for the scores of shining stars and our phone lights. The sounds were otherworldly and we met green shiny frogs, a big tarantula, caimans in a pond, and just before entering the village, a couple of cute monkeys resting in one of the huts. When we returned to the village it was time for dinner and we headed to a local outdoor restaurant. Our dishes included veggies, rice, and beans, all cooked in tasty sauces packed with flavor, and my new favorite, patacones (plantain pancakes). We drank what will become a standard feature at any meal here – exotic Amazonian fruit juice. The juices served at the various meals were made from Copoazú, Arazá or Lulo (a tangy, citrus-like fruit which only grows in the Amazonian jungle, packed with vitamin C).

Being vegan and focusing on ecotourism is not only about food. An important part of it is not interfering with nature and its inhabitants as much as possible. When I worked on planning the trip I was alarmed to find that one of the tourist attractions in the area does exactly the opposite – fishing piranhas. We clarified in advance to our Amazonian travel company that we don’t partake in killing animals and will not participate in fishing.

Science tells us that fish have nerves just like us and they can feel pain, think, and have self-awareness. When fish are hooked they endure tremendous pain and are terrified. Researchers at the Pacific Northwest National Laboratory in Washington study decompression sickness in fish discovered that fish suffer from decompression sickness far more than humans do. “It’s like the bends on steroids,” said Dr. Brett Pflugrath. “You tend to see more extreme injuries from it.” The fish may have symptoms such as its stomach hanging out of its mouth and bulging eyes. David Fairclough, fish biologist of the Western Australian Department of primary industries said “Often the swim bladder ruptures, releasing gas into the abdomen,” “And then there can be internal injuries that you don’t see.” Sadly, most tourists who visit this area take part in fishing and are oblivious to the suffering of the fish. I’ve heard some say, “oh, we will just catch and release them”, not considering that fish who’re caught and released feel the pain of their injuries and often die.

Let’s get it straight, piranhas and other fish are part of the Amazonian ecosystem, but we, the tourists, are not. We are only guests, and as such, we need to treat the native animals with respect and leave them and their habitat untouched and unharmed. Fishing does the exact opposite. Injuring and killing wild sentient beings for momentary pleasure is nothing more than inhumane and non-eco-friendly activity.

Once our guide realized that we don’t eat animals and don’t participate in killing them, he understood our approach to nature and was sensitive to it. During one of our canoe rides, he asked me whether I’d be okay if, when seeing a baby caiman, he’d take the little animal and show him/her to us. I was very glad he asked, and of course, I said no. The same thing happened when we encountered a termite nest on a tree. I was asked if it was okay if he disturbed the nest a little so we can see the termites, again I said no.

I find those activities, fueled by tourists’ demand, cruel and harmful to the animals and their environment. Every time humans touch a wild animal for amusement, they’re causing unforeseen changes that may negatively impact not only the animal herself but other animals in their surroundings. Most humans like to feel superior to nonhuman animals. Disturbing them for fun, when visiting their turf, seems normal. But it’s not. Taking a baby away from her mother even for a few moments is traumatic for both mother and baby. Destroying, even a small part of the termites home, which takes them a lot of energy and time to rebuild, is callous. My mantra is, if you do not want it to be done to you and your children, don’t do it to others.

If we are to view wild animals, the best is to watch them from a distance. One of my favorite animal sightings was being on a canoe at dusk, watching and listening to a flock of egrets gather to roost for the night. It was such a magical and unforgettable scene.

Back to our culinary adventures. After going by canoe to Peru (not that far) to see a giant 400-year-old Ceiba tree, we ate a tasty lunch in a tiny indigenous Peruvian village. Not only did I feel satisfied by the delicious meal, but being in the heart of pristine nature, I felt great about being vegan, a way of life which reduces deforestation, and species extinction. 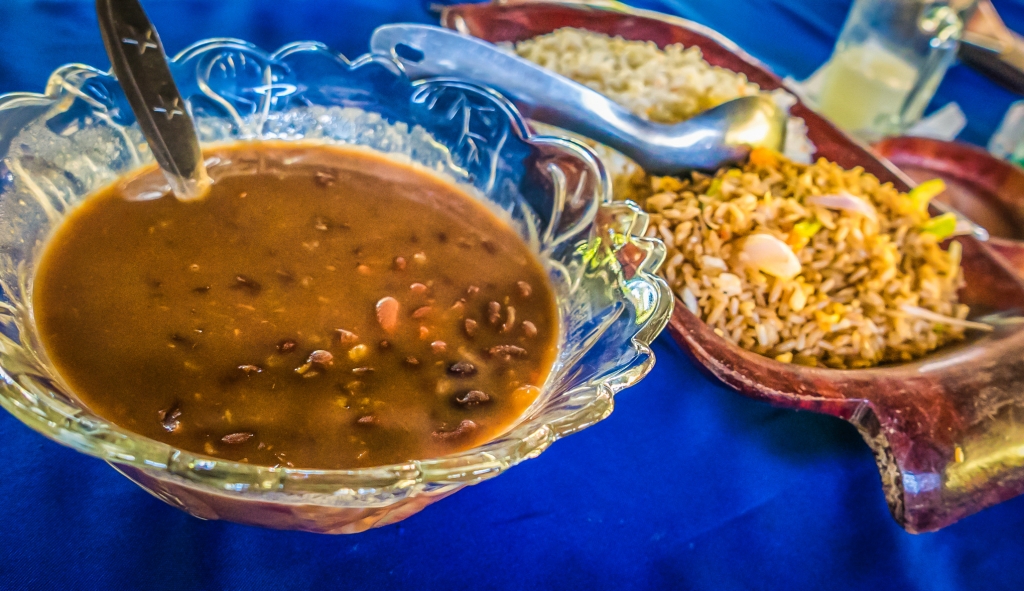 Lunch at an Amazonian Peruvian Village

Next stop was the colonial city of Cartagena. Breakfast at our hotel offered an array of tropical fruit (including my first ever tamarillo), various cereals, coconut shreds, nuts, and seeds.

After a long walk at the old colonial city, we stopped for lunch at the vibrant and authentic neighborhood of Getsemani. We chose Cafe Stepping Stone which offers a few vegan options, and many items that can be made vegan. We ordered the Sweetcorn Fritters which were served topped with mixed greens, carrot, celery, cabbage and avocado in a green tahini dressing, and Champiñones, a mushroom mix cooked in garlic and herbs, tossed with mustard greens and sesame seeds on toasted bread and beetroot hummus. Both dishes were exquisite! Their soy-based tropical fruit smoothie was so refreshing and yummy! 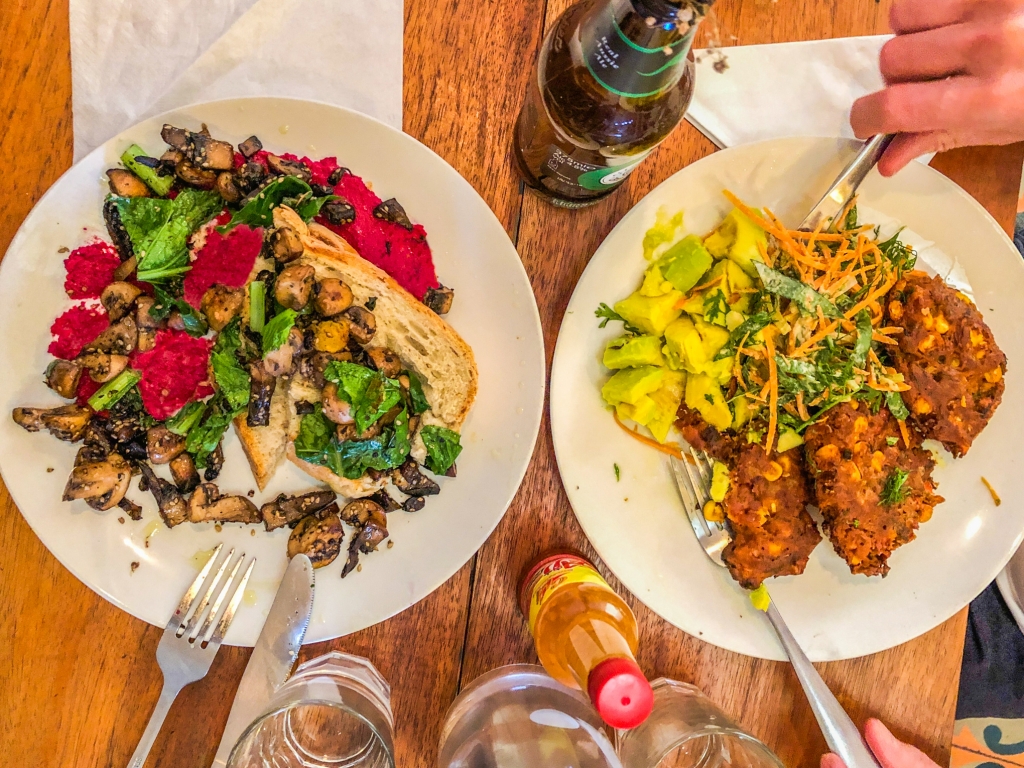 Later that evening we visited the magical Alquimico Bar. Glass jars filled with fruit floating in mysterious liquids catch your eyes, and you have to go in! This speakeasy-style bar is located in a colonial mansion filled with D.J. music and a modern vibe. We sat on the first floor which serves imaginative rum infusions of various tropical fruits and imbibed a few cocktails including the outstanding Medellín – rum infused with mango, and El Laboratorio – lulo infusion. I really miss that place! 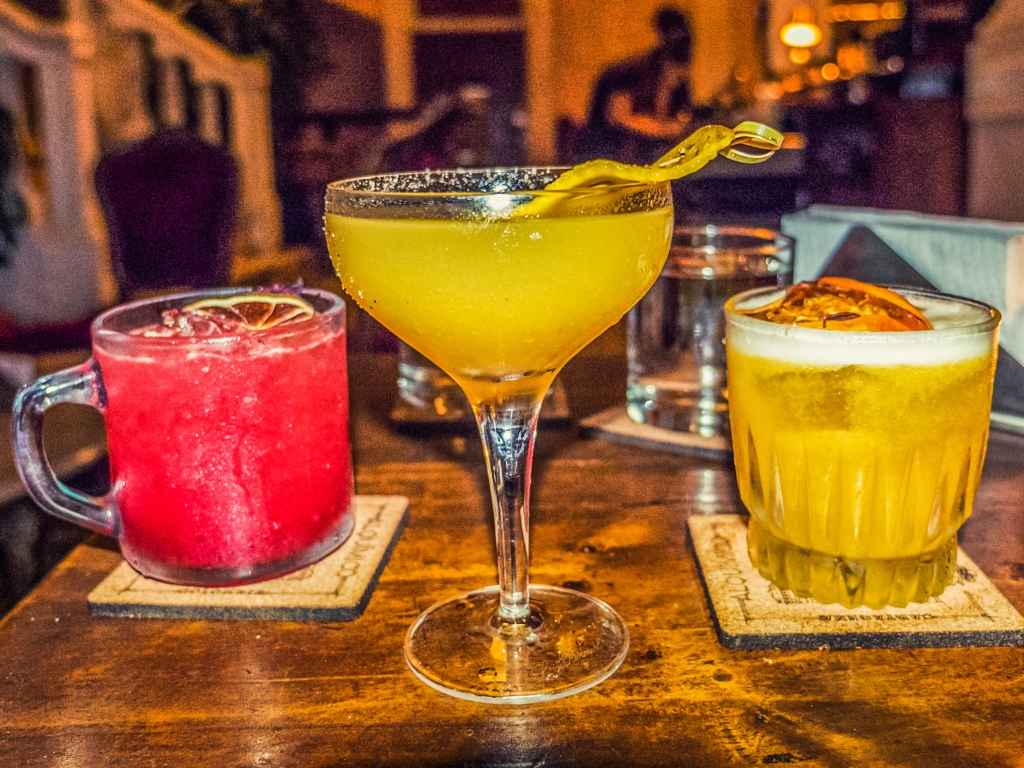 For dinner, we opted for the Kokoa Sushi Wok, a restaurant which offers a few vegan starters and main dishes. The vegan sushi and veggie wok were very tasty and we were reminded that Asian restaurants are likely candidates for excellent plant-based food if they leave out the fish sauce. 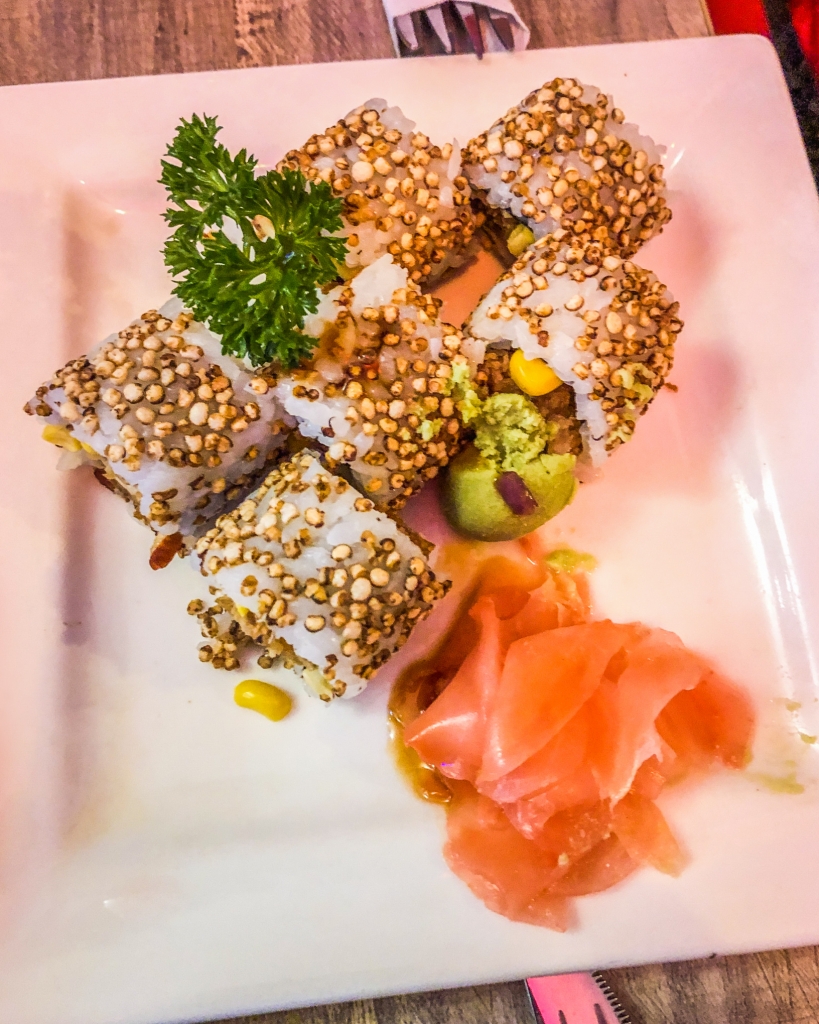 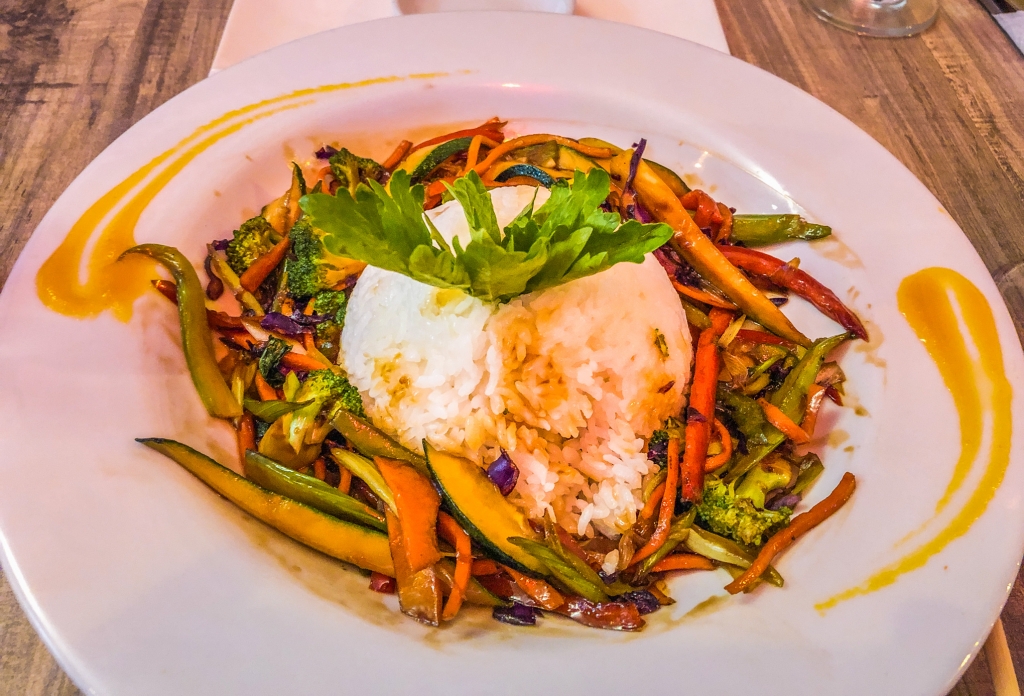 Next destination was the Caribbean jungle of Tayrona. We stayed at a beautiful lodge that served us vegan meals, with an amazing view of the Caribbean sea and a river. After a 26,000 step hike in the jungle and refreshing swims in a couple of beautiful beaches, it was time to head back to the lodge. Nothing was more satisfying than savoring a great 3-course delicious plant-based dinner made especially for us!

Our Colombian excursion was wonderful and I’d return in a heartbeat! It wasn’t only because of the animals and places we saw. I took pleasure in having interesting conversations with the people we met, most of whom were young tourists who are sensitive to the plight of animals and the environment. Seeing what we ate almost always sparked questions, which inevitably lead to intriguing conversations about plant-based foods, veganism, and beyond. Those are part of my treasured memories from our journey.

For me, vegan travel is not only rewarding and fulfilling but exciting and delicious! Next time you travel please remember, you are only a guest, be a conscientious and responsible tourist. Eat plant-based foods and don’t interact with any wild animals. As the saying goes, “Take only photographs, leave only footprints.”

For more about our relationship with nonhuman animals and veganism subscribe and follow my blog: i’m an animal too.