Weekend Getaway at Ilha do Mel 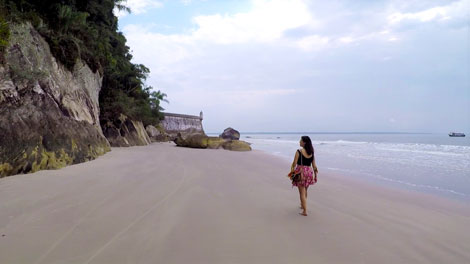 Flash forward to the present, after my previous two blogs (here and here) that chronicled of my experiences upon entering Brazil.

I shut the door, my head pounding lightly because of the sun. It didn’t matter I had waited for my girlfriend in the shadow. We drove off early afternoon to avoid heavy traffic. We descended out of the mountains between large stretches of “Pantanal” and banana plantations. (Pantanal are tropical wetlands that are mostly found in western Brazil but range from Bolivia up to the Brazilian coast). Ever closer to sea level, left and right there were plenty of roadside stores offering this delicious yellow or green-skinned fruit still hanging on its branches. When the road evened out, thick clouds started hovering over us. Depression set in, hopefully, it wouldn`t be like this all weekend. We had imagined lying on the beach and to enjoy the sun and the sea at Ilha do Mel.

Ilha do Mel means Honey Island in English and is an island just off the coast of Parana, one of the three southern states in Brazil. It’s a popular weekend getaway and holiday destination for people living in nearby cities.

Back in the car. The weather still the same, we continued along an asphalt road without a shoulder. Surrounded on both sides by fruit and vegetable stores, convenience stores, the occasional unfinished building covered in deteriorating paint, and unpaved roads leading to the neighborhoods behind. About one kilometer from the harbor of Pontal do Sul every couple of 100 meters there were men standing on the road waving frantically. 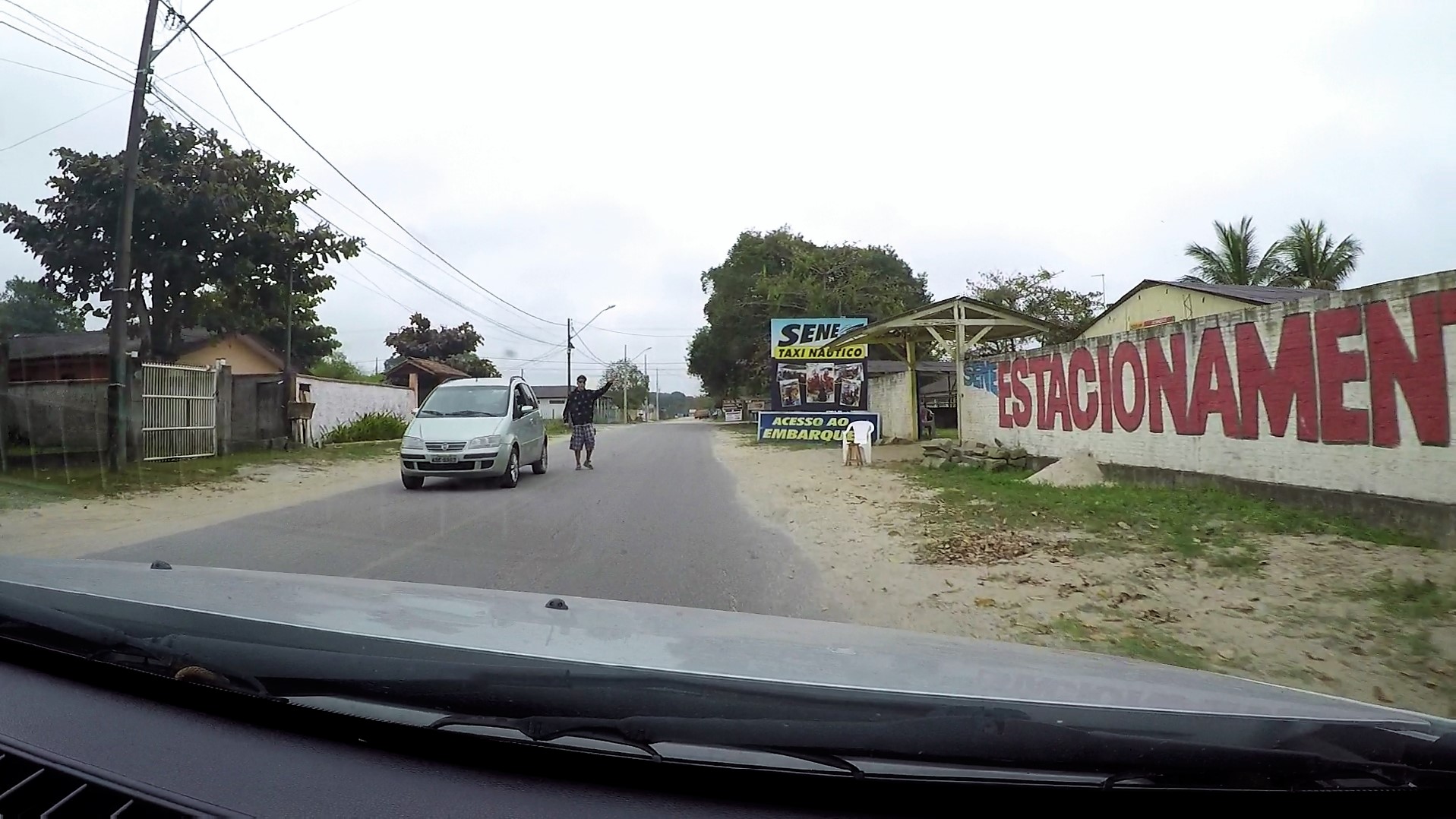 They were owners of private parking spaces trying to make us park our car at their place for the weekend. Slowly we continued, left, right, left, to finally park at the parking lot closest to the harbor. We got our ticket from a blond-haired woman wearing glasses. The wrong one though. On second try we got the right one, R$45, – from Friday to Sunday.

A short walk and we arrived at a collection of single floor buildings constructed out of dark wood. A fast food joint, a souvenir shop with a mannequin wearing a bikini and a see-through poncho, and most importantly; a desk to buy our boat tickets. A return costs R$35,-, including taxes, that are not being used to improve the facilities as one of the employees of the boat company confided in us.

After a 40-minute wait, depressingly discussing the weather, we stepped down on to a low boat with 3 rows of double chairs, each hauling two bags with us. One of which I had filled with the necessary provisions. I brought fruits, quinoa salad, cooked sweet potato, and green peas. Not because I was afraid there would be no vegan food, but because everything on the island is quite expensive as all of it comes from the mainland.

Sitting on our re-purposed bus chairs, I started getting nauseous. I had been looking on my phone too long and the smoke coming from the diesel motor didn’t make it any better. Luckily the crossing only took around 30 minutes. If you’re prepared to pay more, you can hire somebody to bring you by speedboat to the island. Just be aware that the waves might result in an occasional shower. In the summer this could be desirable, in our case it wasn’t.

Up to the short pier lying over the beach, we walked onto the Island. After a short walk on sand, we saw our Pousada on the left, the sun was setting, even though it was nowhere to be seen. The island is filled with Pousada’s (lodges) like ours. Offering rooms with or without air-conditioning, often with breakfast included (ask before you go, what this entails). The entire island, in fact, consists either out of places to spend the night or places to get food.

The island quiet, and with the sunset around 18.00, there was little to do at night (this time of the year). We slept and rose early. After breakfast, we walked down another sand road (there is barely a paved road on the island), and on to the beach. We decided to go left. With the sea on the right, and green vegetation, an occasional wooden house, and a couple of predator birds on the left. After an hour we arrived at a fort which was used to fight the English, pirates and other intruders. Canons still in place. 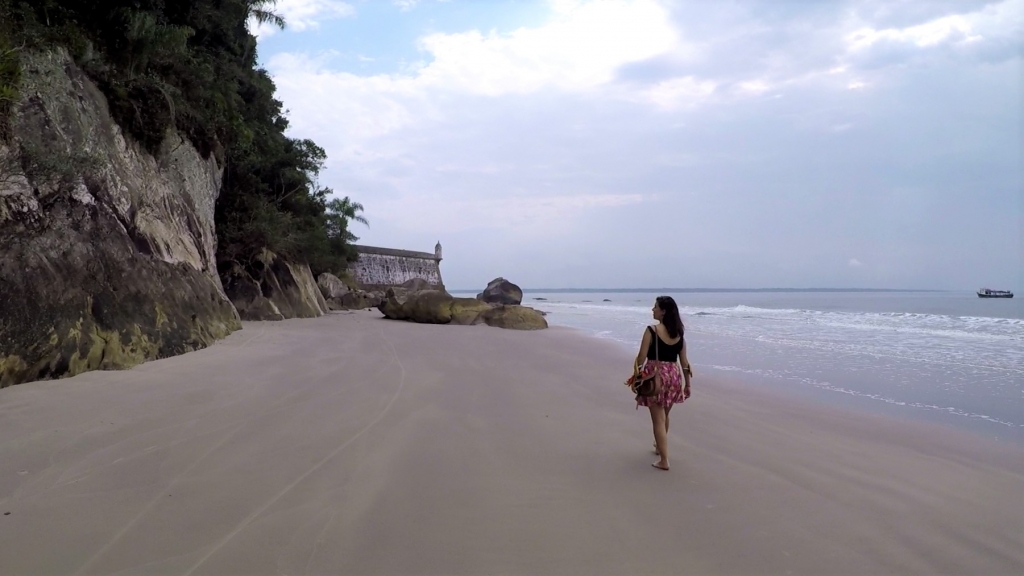 Fortress of Nossa Senhora dos Prazeres Paranaguá in the distance 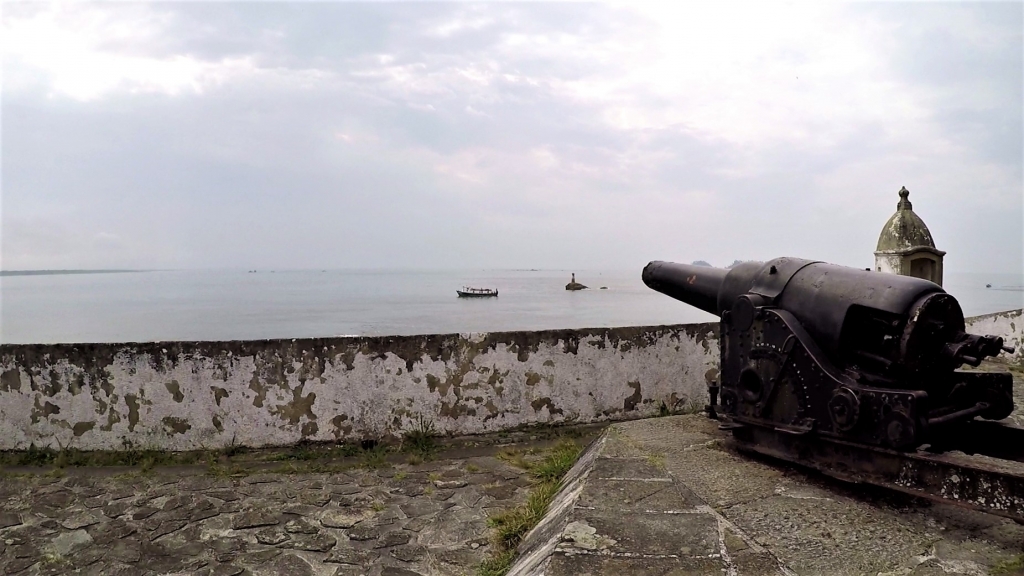 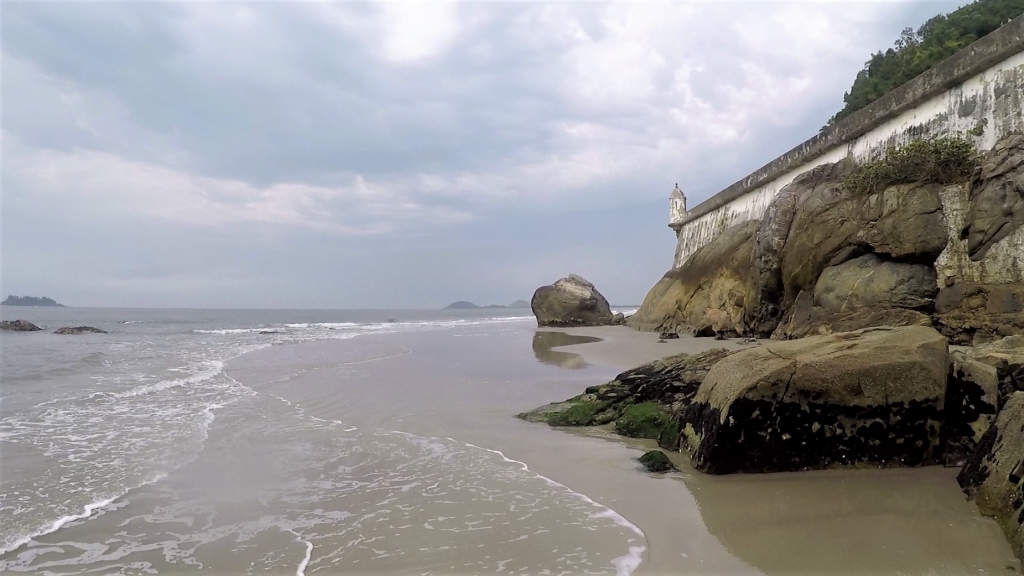 Fort from the other side

After a steep climb behind the fort, over tree trunks, between tall standing vegetation and Tarzans’ preferred means of transport we arrived at a viewpoint. We enjoyed a spectacular view, until 3 seconds later a bunch of hungry mosquitos started attacking us.

We took note of the cold ocean water by diving in for a bit, where after we returned the same way we came. There was a trail through the forest, but the mosquito attack was too fresh on our minds.

We met up with friends for lunch. I enjoyed a vegetarian plate with some raw vegetables, salad, and potato fries. All our meals came with the usual rice and beans. I ate all, my own and my friends’ portions. After lunch, our waiter, who liked to joke around and wore a cap, a constant smile, and a t-shirt 2 sizes too big to cover his belly, confided in us he had sampled all my friends’ caipirinhas.

We finished the day at one of the amazing beaches, adoring the sun that had come through beautifully for the afternoon. I took the opportunity to enjoy another salt water fix. 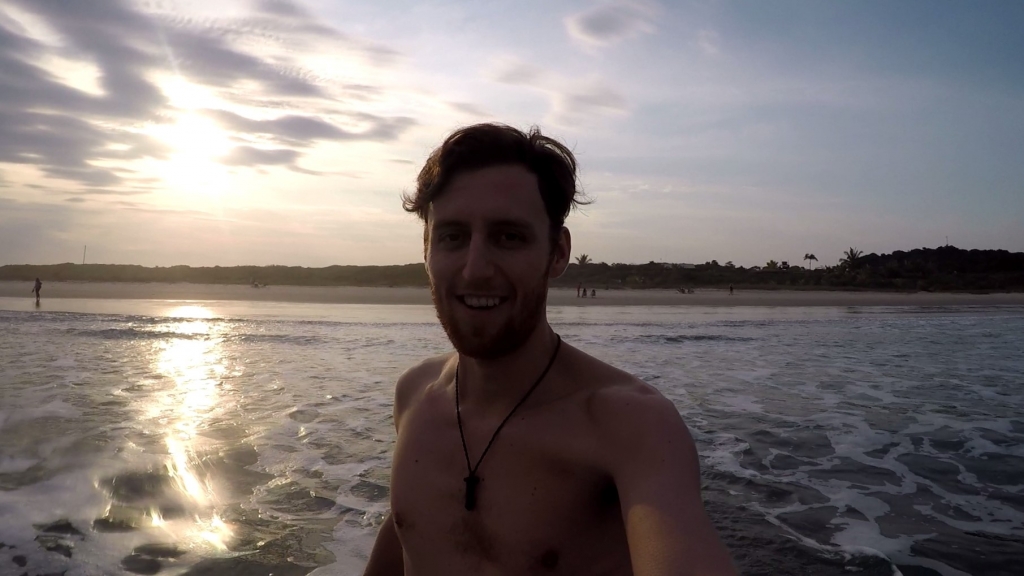 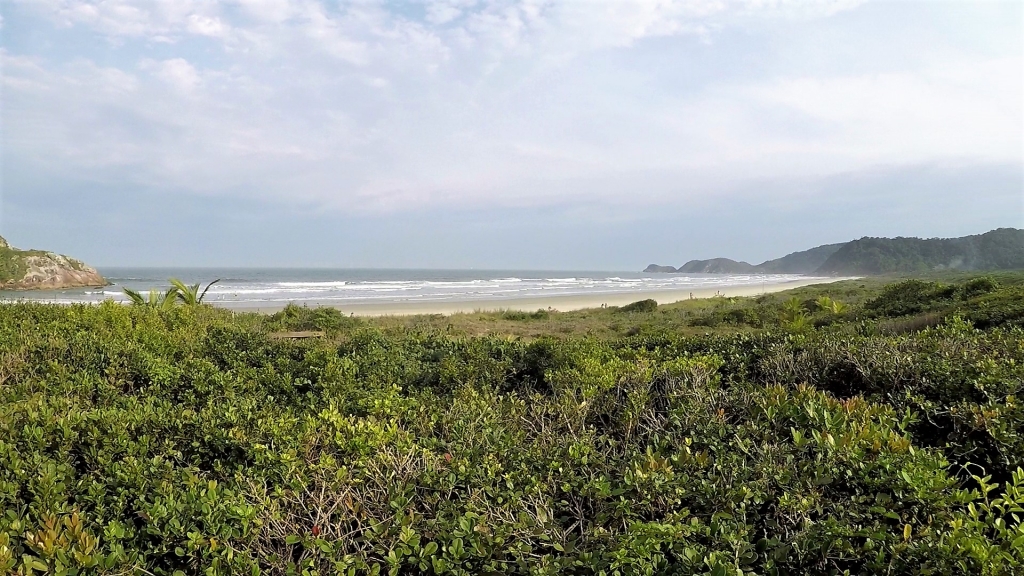 On Sunday morning we rose early again. We walked down the same path as the day before, only to turn right before we got to the beach. Passing by the most uneven soccer field I have ever seen in my life, another 3 or 4 pousadas, we finally ascended the hill up to the lighthouse that is visible from large parts of the island. #acendeofarol is an effort by locals to get it working again (unsuccessfully so far). The clouds that had set in again could not diminish the beauty of the panoramas in front of us. 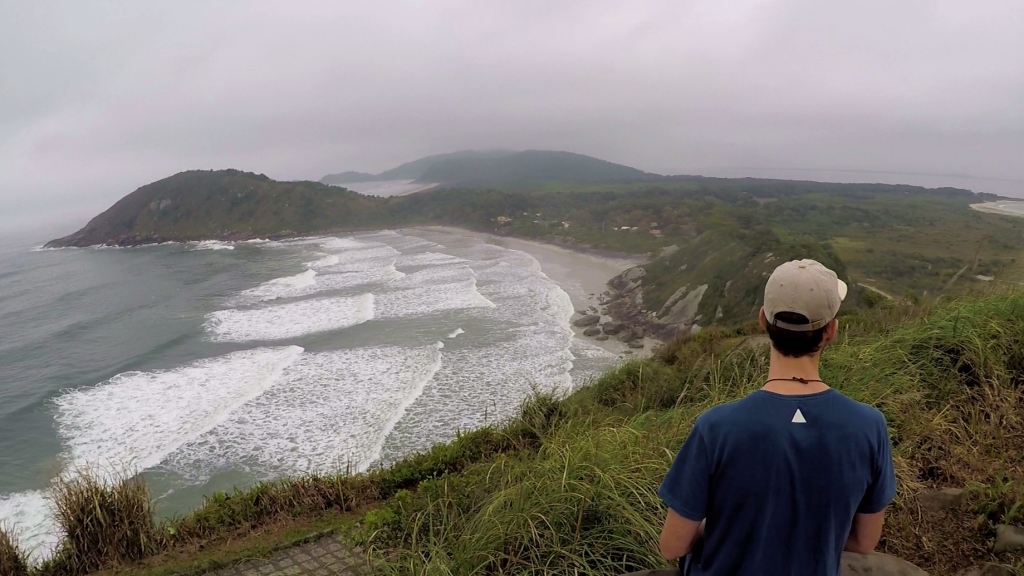 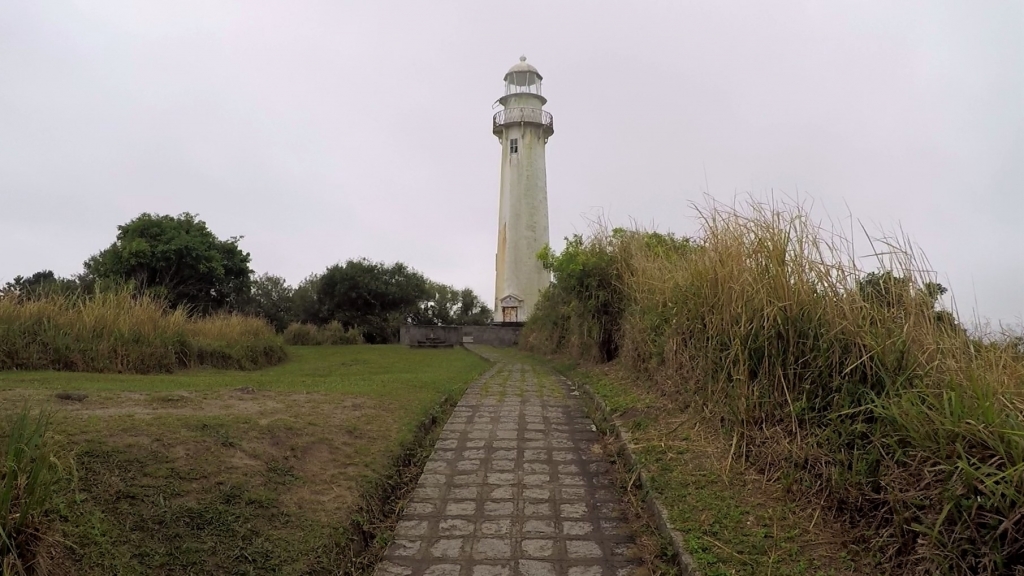 Finally, a couple of practical things to consider before visiting Ilha do Mel. As it is a popular weekend getaway and holiday hotspot, try to go during the week and out of season if you can. There are plenty of nice days during the winter as well (July until September). Also, there is a cap on the number of people that can enter the island. No more than 5000 people are allowed at the same time. In summer this means you need to make sure you get to the boat terminal early.

During the week the boat leaves every hour and during weekends every half an hour. For more information click here.

Then regarding food. Usually, the pousadas offer a (small) buffet style breakfast. Ours consisted of a lot of processed food, meat, bread, cake, fruit juice, and “fresh” fruit. Remember, everything comes from the mainland, so perhaps if you stay longer, bring food yourself. The place we had lunch, Toca de Abutre, offered a vegetarian/vegan plate. I don’t know how the options are elsewhere.