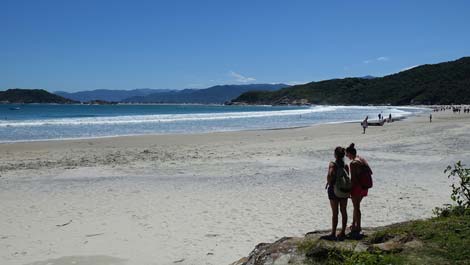 In my previous blog, I discovered the far South of Brazil. During that time my ears were often too cold, the clouds too many, and the rain too present. As a result, I quickly decided to travel up north, in the direction of warmer weather, instead of aiming for the Uruguayan border.

I rose early, to find my Couchsurfing hosts already sitting in the spacious kitchen, with a dark marble counter, white paved floors, and enough machinery for 4 kitchens. The table loaded with bread, fruit, and nuts. The final two mostly because of my presence. With my eyes half open I said: “Bom Dia” and started to indulge. Understanding the slight tension for a sign that I had to hurry up, I ate quickly and started preparing food for on the way. There was still a lot of hummus left from the day before, when I had to find an alternative for the all-meat Brazilian barbeque. I loaded most of it into a Tupperware to prevent me from going hungry on the road.

I had the feeling I was a bit greedy loading all that hummus, nuts, and dried fruit into my backpack. None of which I had payed for. Fresh into my travels I still felt awkward every now and then, staying with people in their homes through Couchsurfing. They were so forthcoming, and I wasn’t always sure how to behave in response.

We drove through the empty roads of Torres, a city that only lives in the summer, the man of the house went 10 minutes out of his way to drop me off at a gas station. I hugged my host, bid him a million thanks, all the while he was assuring me that he dropped me off at a triple-A hitchhiking spot. Another couchsurfer had caught a ride within minutes here.

Half an hour later I concluded that there was mostly local traffic passing by, and nobody was entering the highway. I decided to grab my backpack and walked through the smoke coming from the exhausts of passing cars up to the highway. There was an old deserted gas station ahead that was only being used by trucks. I positioned myself in full sight between the gas station and the highway.

Just when my right arm began to get really sore a white colored hatchback came driving back. The man had initially passed me but decided to pick me up anyway. Where I was going? To Florianopolis (Floripa), me too!

He told me he was working and was officially not allowed to pick anybody up. The man, my height and in his thirties spend a lot of time on the road selling matrasses. Also, he had hitchhiked all through South America, he spoke English, but he told me he would talk slow in Portuguese for me to practice. The ride was amazing and 3 hours later I walked into the central bus station of Floripa.

This city, or half city half island, is just off the coast of the state of Santa Catarina and is connected by a bridge to the mainland. Little did I know that I would stay here for 5 weeks when I went to look for my bus.

I had received the instructions on which bus to take by my new couchsurfing host the day before. After asking a couple of people I thought I entered the right one. Driving by coast we circled around the northern part of the mainland, with the water, boardwalk and public sports facilities on the left and tall apartment buildings and shopping malls on the right.

Over the bridge and onto the island. I noticed more vegetation, and more curled roads, all the while being slightly nervous. You never know if you took the right bus until you arrive at your destination. After an hour I walked up a small street flanked by yellow-whitish brick stone houses and 3-story apartment buildings.

I spent a couple of days in Ingleses. Staying at this couchsurfing I quickly understood that the Portuguese I had learned the previous weeks wasn`t worth a thing. Here, they spoke faster than Micheal Schumacher on a straight Formula 1 track, without making any effort to move their lips. This was the definition of a language barrier. Anyway, Ingeleses is one of the biggest towns at the island of Floripa and is a severely popular holiday destination for “Los Hermanos”, the Spanish-speaking neighbors from Uruguay and Argentina. During high season (Christmas through carnival) the national language could be Spanish there.

Within these couple of days nevertheless, I fell in love with the island. Only 54 kilometers there is still enough space for 62 beaches, beautiful trails, plenty surf sports for any level, and splendid nature. I decided that I would stay here a bit longer and decided to look for an Airbnb. I found a room at Praia do Campeche (Campeche Beach), a 2-minute walk from the beach. 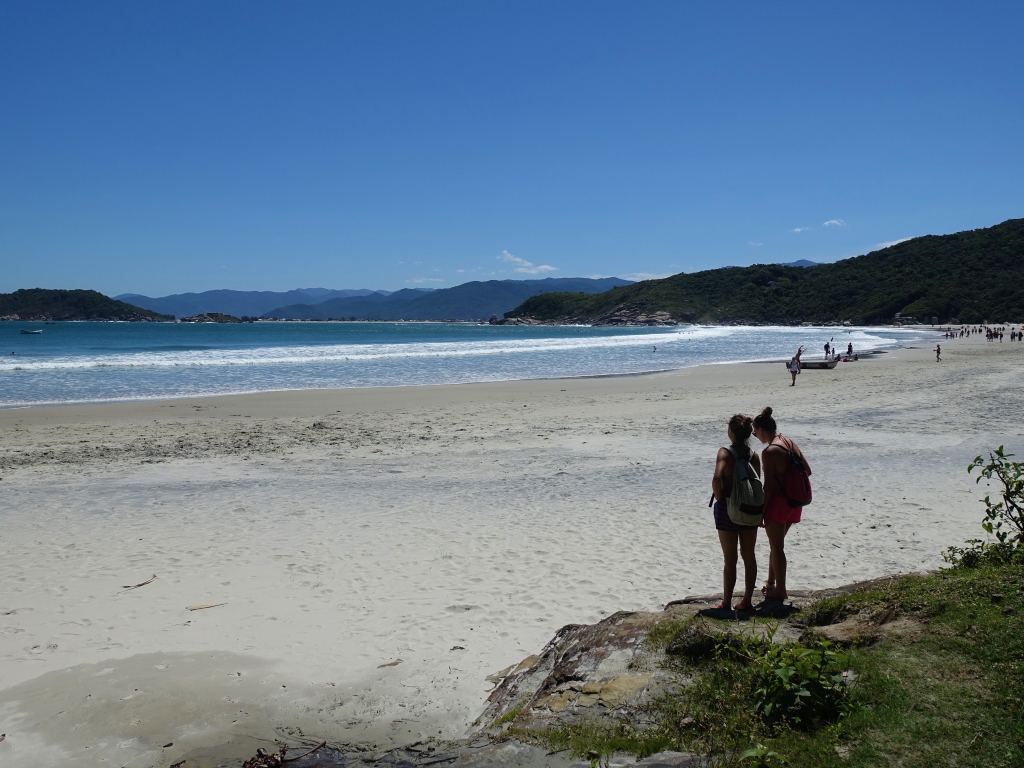 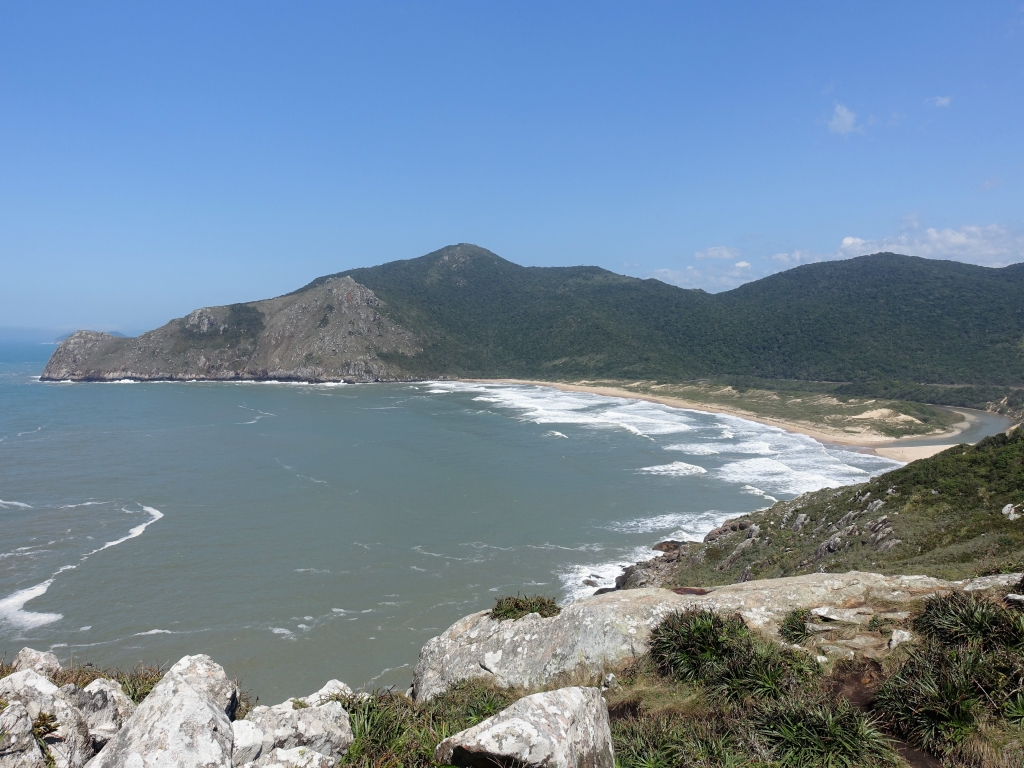 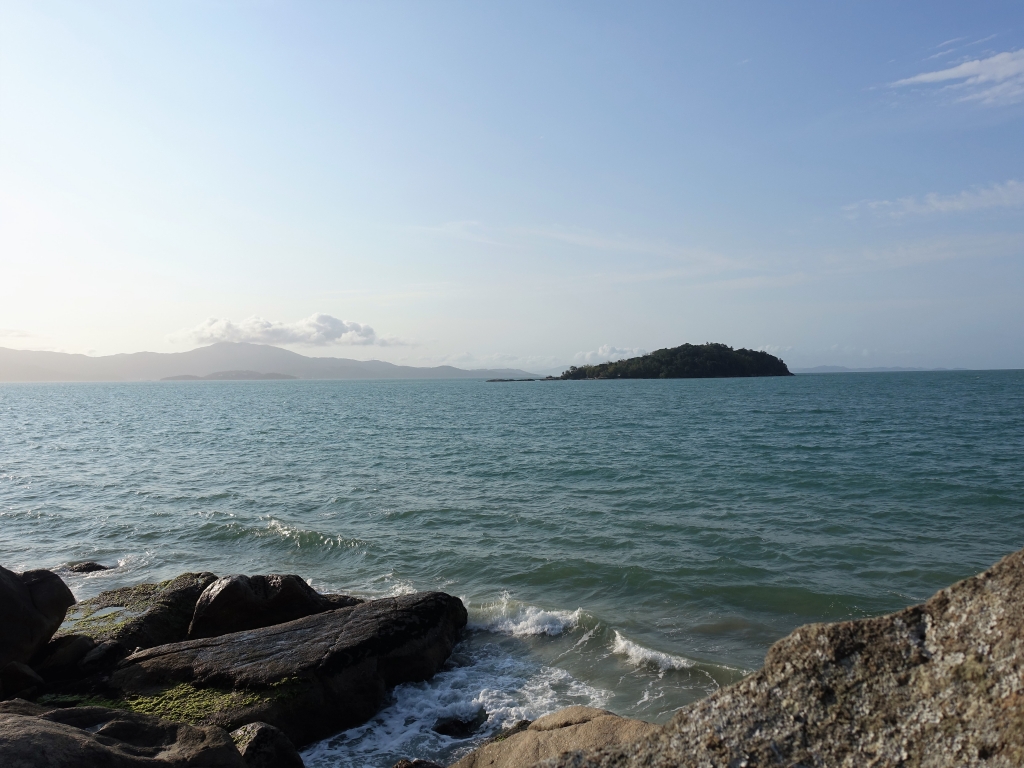 In these four weeks I surfed every day at least once, mostly twice, I read a couple of books, I hiked, and I ate loads of bananas, mango, coconut, papaya, avocado and a ton of other fresh fruit and vegetables. I thought about myself, life and everything in and around it. This would ultimately result in me starting my own blog on lifestyle design. 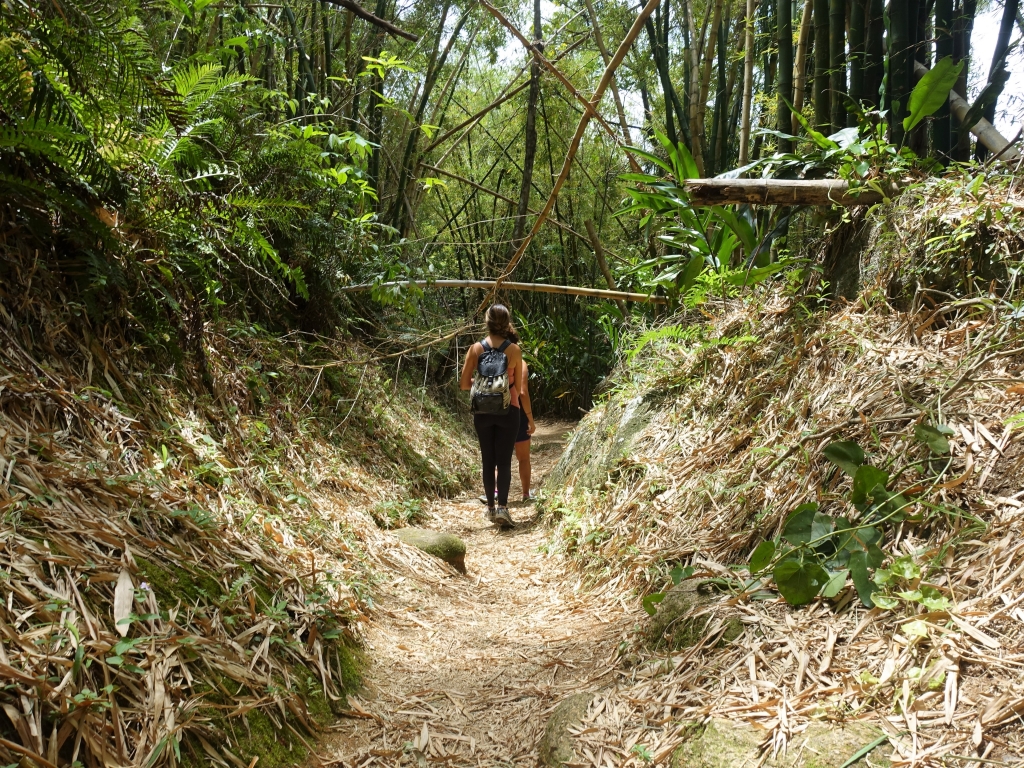 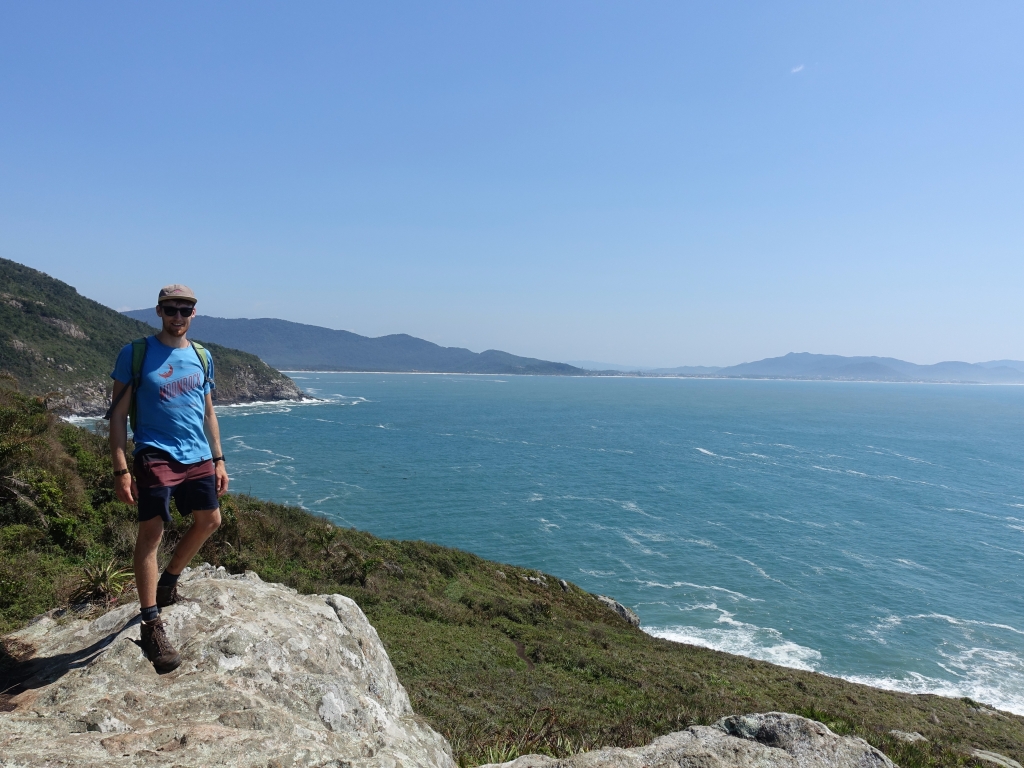 In the meantime, I learned that four little kittens in a small house as the one I was staying at, are more destructive than a hand grenade. In the four weeks I stayed there, they managed to denigrate a fine-looking couch to ready-to-throw-away. Also, they chewed on my headphones and used the whole place as their toilet which forced me to be hyper-alert when I walked to the bathroom at night. On top of that all a peculiar thing happened one week into my stay. A stressed looking man came looking at the gate for my host. He wasn’t at home. When he would be back? I don’t know.

Over the following weeks this man returned a couple of times with a bunch of documents ever more agitated. Me and my friend started to worry, did our host do something wrong? What was going on? After two weeks the two were finally at the same place. It turned out he needed a signature. My host lifted his shoulders and said: “Brazil”.

Besides enjoying the sea at Floripa, I hiked a bunch of trails, ended up at a particularly interesting party hosted by somebody that was earning a lot of money sending stuff to the place I am from, I made friends, and after 5 weeks I had the same farewell party as after 2 years living in Switzerland. 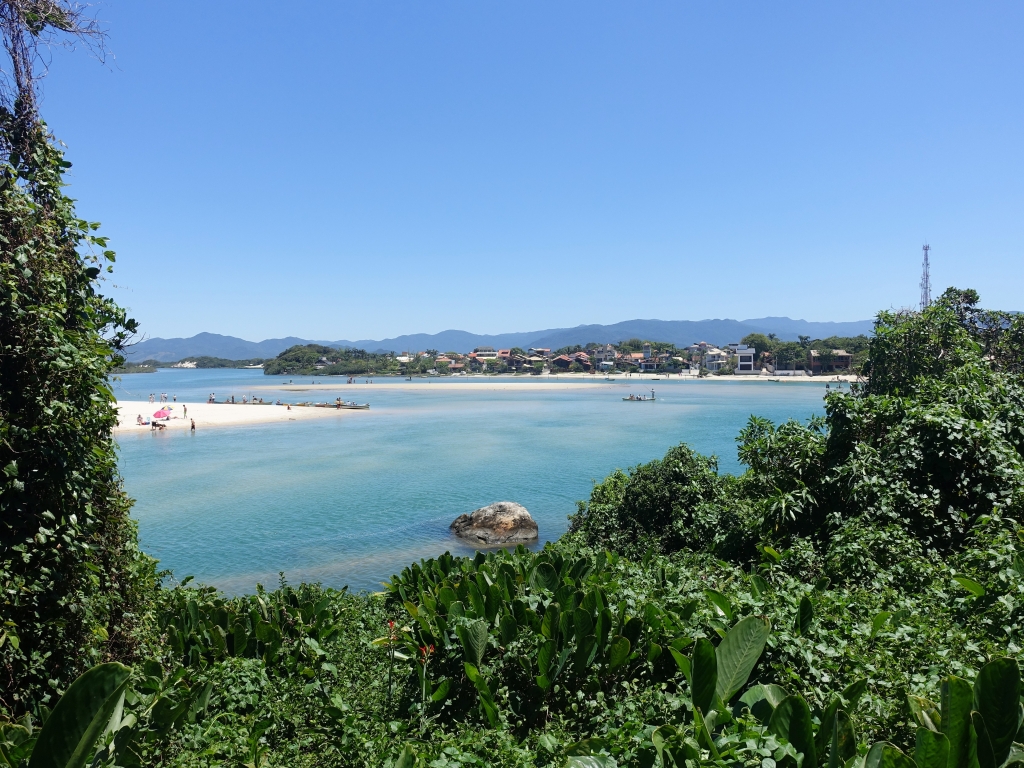 Guarda do Embaú, crazy party in a beautiful place 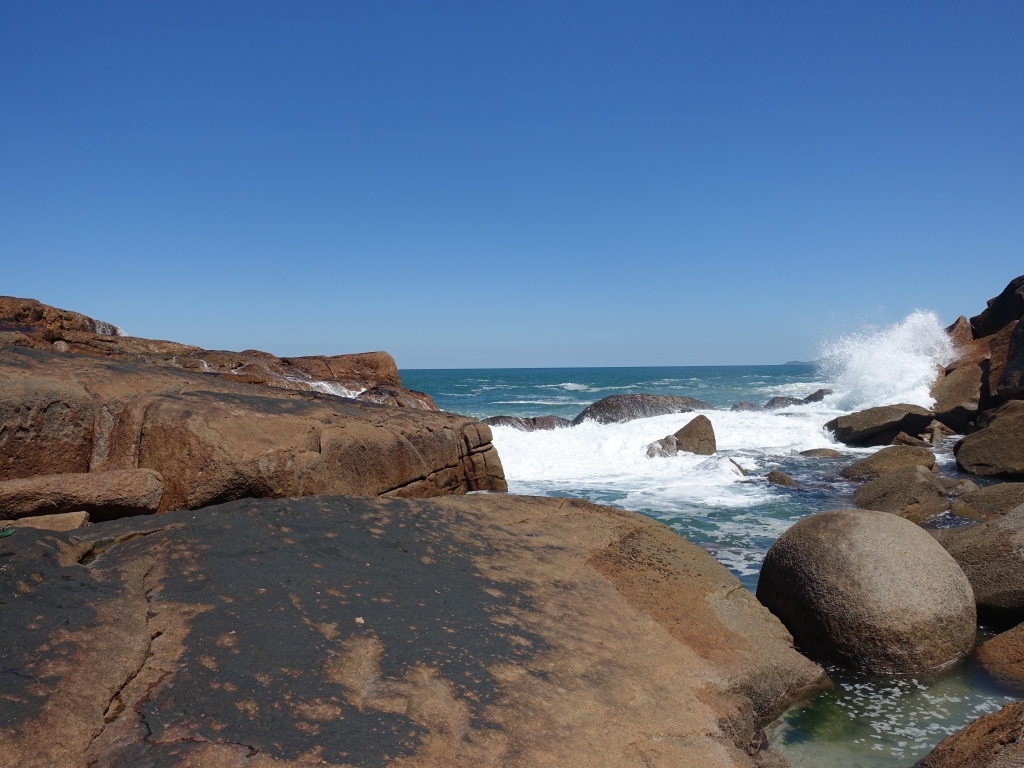 In the north, the Island is packed with hotels and resorts, but as you go down the island it gets more authentic as until you reach the south which is straight up paradise. It is also the farthest from where everything happens (45-60 minutes by bus). However, If I would return I would go there regardless of travel times.

These travel times are something worth considering though. The traffic situation is a disaster, just 3 main roads connect everything on the island. In the morning before 0800 nobody can enter, so that everybody that needs to go off, can. In high season it is impossible to go anywhere. I was told the main street passing through Lagoa da Conceicao (the restaurant and party area) equals a parking lot in high season. My advice therefore: don’t go there between Christmas and carnival. Go before or after, the weather starts getting nice from October on, up until June.

To close this all down, vegan on Floripa? Amazing, cook yourself! There is one not-worth-mentioning vegan restaurant on the mainland, one on the central part of the island, and another one in Campeche. I only tried the not-worth-mentioning because I enjoyed playing with the abundance of fruit and vegetables in the kitchen too much. 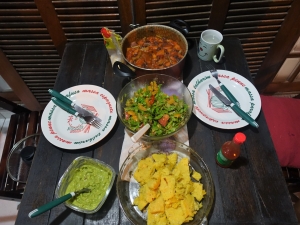 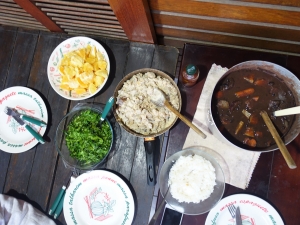 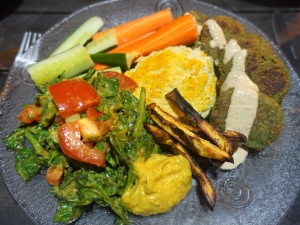