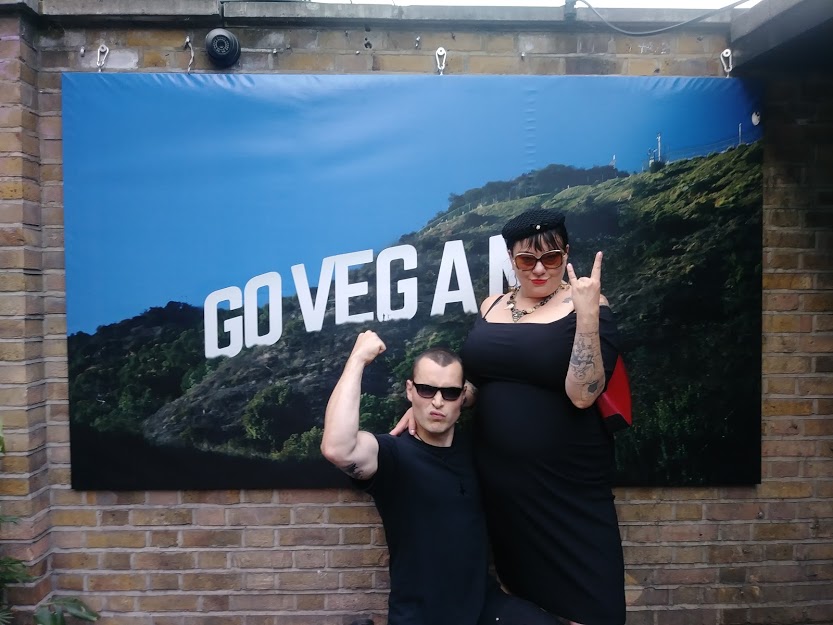 We love vegan parties (even though we’re usually working at them)!

I would be remiss if I didn’t start this piece off with a disclaimer: We own a vegan sandwich company, and we have been vendors at most of the festivals I’ll mention here. I’ll do my best to remain neutral, because of course we don’t favor one event over another: All of the events we’ve ever participated in or attended have been a result of the hard work and dedication of the organizers, and we are grateful for the opportunity to have participated in all of them.  Vegan festivals are a wonderful thing to be a part of in any capacity!! 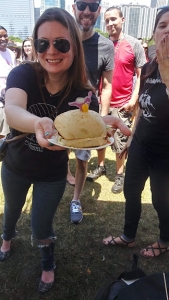 Some of the lovely people we’ve gotten to feed while vending. Honestly, vegan festivals have the NICEST attendees! Look at all those smiling vegan faces. Warms our hearts.

Honestly, sometimes I can’t believe how fortunate we are. Travelling around and working at our own business, not only with each other (my husband Clayton and I are not only co-owners and co-founders of Snackrilege, we’re also BFFs, aw) but with all the lovely people we’ve met along the way–well, it’s a dream come true and I couldn’t be more thankful. So with the caveat of equal gratitude and in the interest of utmost neutrality, I write this intending only to share experiences and information, not to self-promote our business, or endorse any of the festivals or businesses over another.

The businesses I will mention have most likely been tried as a result of convenience– As a vendor, frequently, the food we try simply depends on our booth placement and the accessibility of the other vendors. There are booths I’ve never gotten to sample because of circumstance, and there are places we’ve been lucky enough to try more than once (s/o to V-Eats INCREDIBLE oyster mushroom wings and Southern Fried Vegan’s beer battered Beyond Burger, daaaaammmn those are tasty!). So please, read with this disclaimer in mind, and see you at the vegan party. 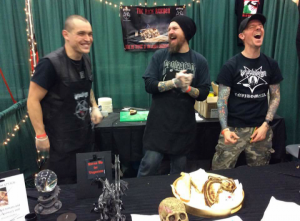 Clayton and our friends Chris and Brian, having a blast at Portland Veg Fest, OCT 2017.

Even though the goal is the same (EVERYONE, GO VEGAN NOW!), the atmosphere and vibes of VegFests and Vegan Festivals is, in my experience, pretty different (though equally awesome, IMHO).  VegFests are typically geared more toward outreach and education, with classes, speakers, and events.  For example, this year’s Portland VegFest features everything from a class on vegan sauces to a panel on fat shaming in the vegan community, plus a fashion show, raffles, a kids section, and of course, loads of vendors and samples.  Though, with 10,000 attendees over the course of two days, the PDX VegFest is bigger than many VegFests (here in Portland we’re world-renowned for our vegan scene, not-to-brag-but-totally-to-brag BECAUSE IT’S AWESOME!), the content is similar.  Education, outreach, super family-friendly, samples, shopping, and FUN!  The VegFest we attended in Bologna, Italy had the same basic format, as does the outstanding Spokane VegFest. VegFests typically don’t serve alcohol and have a wide variety of shopping and activities (and, as previously mentioned, SAMPLES!). 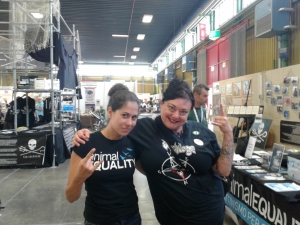 At the Animal Equality Italia booth in Bologna.

Vegan Festivals, on the other hand, are more of a party atmosphere.  Vegandale, the festival we’ve vended at the most, has a stage with an energetic MC and an equally kick-ass DJ, plus art installations (made by the incomparable Matt at Bear Bones Wood) that celebrate veganism in a big (literally) fun way.  Vegandale is always outdoors, and always fun as hell. 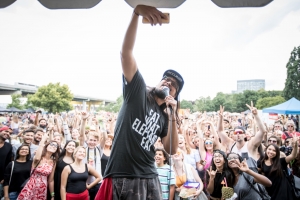 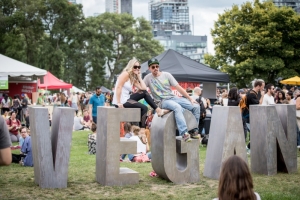 Word to the wise, though, outdoor festivals can also be HOT as hell–we loved Miami this year but man, was it warm.  Fortunately, Virginia Key Beach, as the name suggests, is right on the beach, so several times throughout the day we were able to take swimming breaks, which was pretty damn amazing.  Pro-tip for ANY outdoor festival–bring LOTS of water, sunscreen, and a big hat because big hats not only protect your face, but they’re fashionable af. 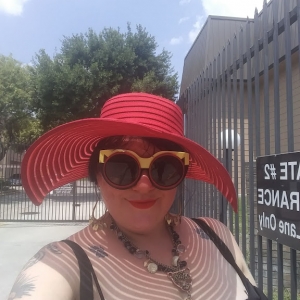 The day before Vegandale, right after booth set up, approximately 100 degrees, still feeling the hat.

Eat Drink Vegan has a similar atmosphere–a big summer festival vibe, a celebration of vegan food, fashion, and fun. We were lucky enough to attend 4 EDVs over the years, both in Portland and L.A., we met a ton of amazing people, and Geezer Butler even tweeted a pic of our booth (rad). 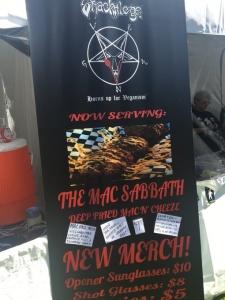 Rumor has it that EDV might be done, but there are a TON of great vegan festivals in SoCal like Vegan Street Fair, Vegan Street Fair Nights, Vegan Playground, and so many more that I’m sure I’m forgetting off the top of my head.  Plus our buds over at Bestie’s Vegan Paradise host pop-ups multiple times a week, so go get your vegan fix!

We’ve talked about our trip to Vegan Nights London  on this site before, so I won’t go into too that too much, but rest assured it is a fabulous time with outstanding food and drink.

I would LOVE to go to Seed FaW in Miami but I have yet to make it–someday.  🙂

VegOut has one more festival this year, in Tucson–I suggest going if you can, it’s a BLAST (we went to the one in Scottsdale last April).

There are SO many local festivals that are thriving and spreading the word of veganism in a fun and informative manner–someday we’ll visit them all!!  On the list for next year?  VegFest Oahu!!

I’d love to hear about your favorite festival!! Hit me up in the comments.

Finally, here are my tips on:

HOW TO ATTEND A VEGAN FESTIVAL AND HAVE THE BEST TIME!! 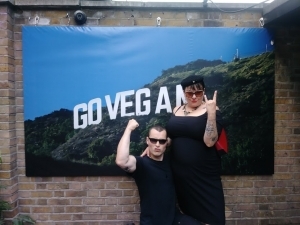 We love both attending and participating in vegan festivals.  The spirit of joy and community is thrilling to be a part of, and the proliferation of festivals is a sure sign that veganism is GROWING!  And if you plan on attending the Vegandale festival at Randall’s Island Park this weekend, we will SEE YOU THERE!