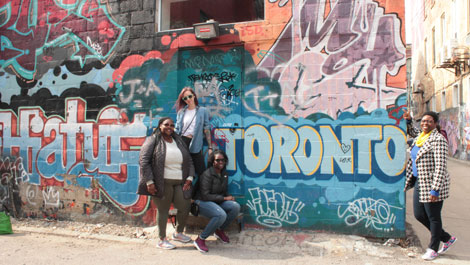 Seriously. Could a city be any cooler? Even the run-down spots on empty streets in Toronto looked like places where I needed to be seen. Surely, anybody who was anybody had already been there…in addition to the hundred other trendy gems scattered about: coffee shops tucked into corners, bars in old garages, pharmacies in historic theatres—this city was too hip for me.

Yet, still I felt welcome.

Canada has a reputation for its friendly-natured residents. Though it remains my first and only introduction to Canada, Toronto proved that stereotype true. The people were warm, hospitable, and typically quite outgoing. Despite having a coolness factor 32 degrees more chill than mine, Torontonians were as far as you could get from pretentious. 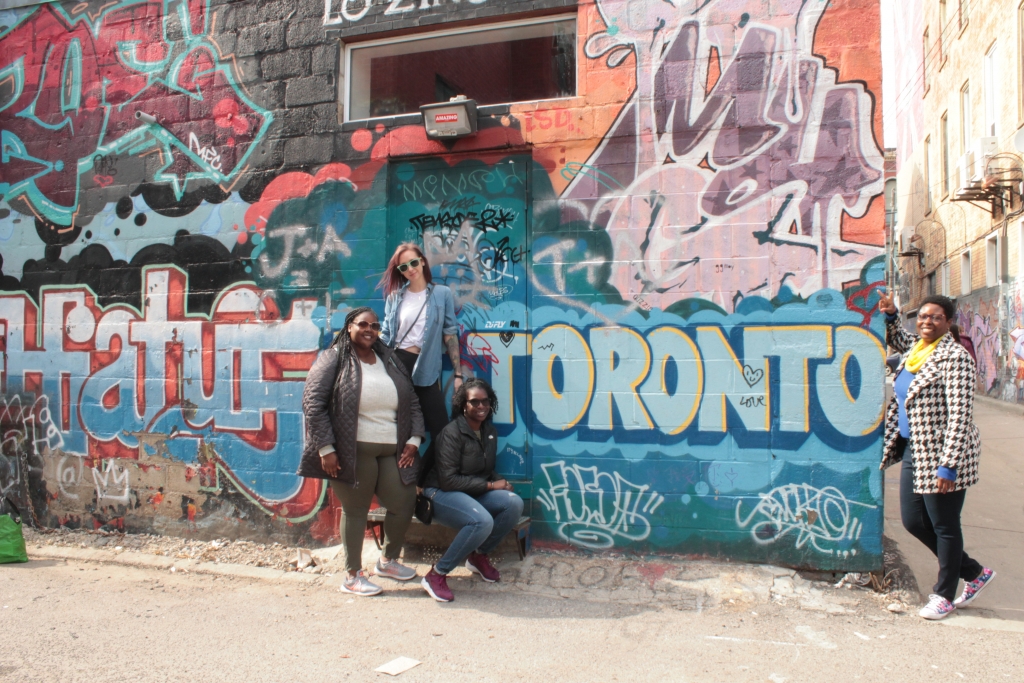 A Long Weekend Away

Recently, I enjoyed an extended weekend in Toronto to celebrate a girlfriend’s birthday. We kept our itinerary flexible enough to explore the town, but our visit absolutely had to meet three goals:

And so we ate, saw, and laughed our ways through the city with ease… we are already looking forward to going back!

The occasion for our visit was a friend’s birthday. I was more than happy to let her determine the itinerary so she could get from our trip exactly what she wanted. Like me, the birthday girl is also a foodie. She’s an omnivorous foodie but we were able to satisfy all our food cravings during the visit.  I did break from the group one afternoon to embark on my own vegan food tour while the others joined in a Chinatown food tour, but we enjoyed all other meals together!

On my own, I hit up vegan spots like Doomie’s, Bunner’s Bakeshop, Cosmic Treats, and the Village Juicery. While together, we enjoyed veg-friendly meals at places like O.Noir, Richmond Station, Mad Mexican Restaurant, and the St. Lawrence Market—and every experience was fantastic!

My favorite meal from the trip, I’d have to say, was the peanut butter bacon burger from Doomie’s alongside a local brew. Heavenly. I’m now convinced that peanut butter goes with everything (pickles, even!). 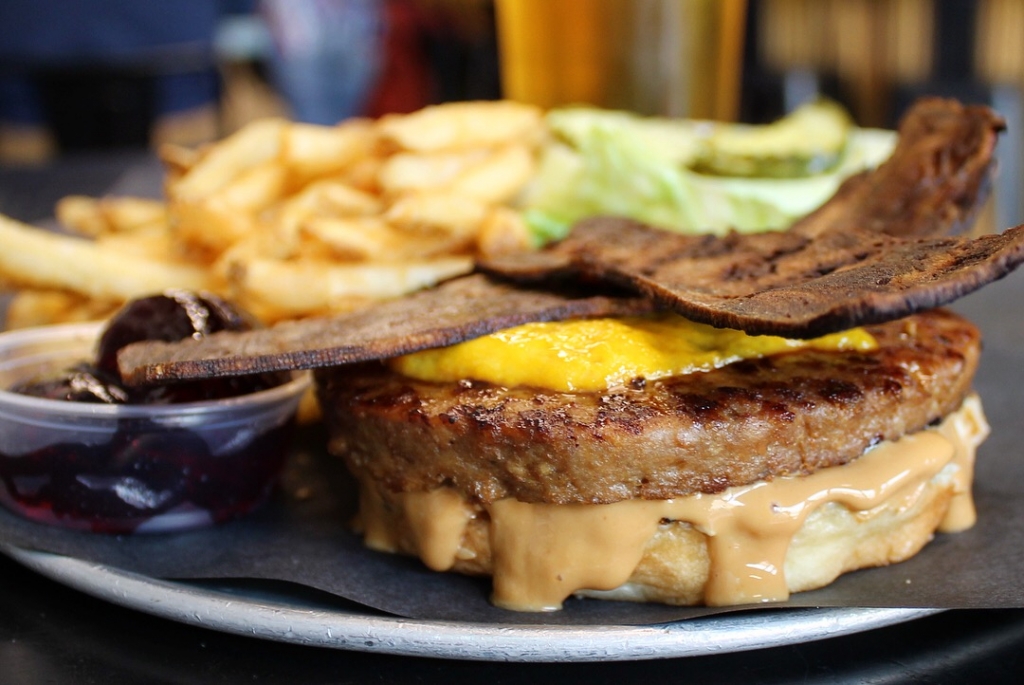 The 6-course chef’s tasting menu from Richmond Station, as you might imagine, was quite extravagant. Between our allergies, food preferences, and dietary needs, the chef and his kitchen were able to accommodate us without compromise. I was impressed by their willingness and comfort in accommodating our needs! Chef Carl Heinrich won Canada’s top chef. I must say, in each dish, I appreciated the attention to detail, consideration for texture, and combination of fresh ingredients.

Now, it’s not an all vegan or vegetarian restaurant, but I’d say that a meal at O.Noir is an absolute must for a trip to Toronto! It’s Canada’s premier “dine in the dark” experience. The entire wait staff at O.Noir is visually-impaired, so the experience of dining in the dark sheds light, so to speak, on what it’s like to be blind. Our server, David, was incredibly sweet and particularly patient with the unruly tables around us. (The only thing that detracted from this meal was how rude and obnoxiously loud the tables on either side of us were. We were not pleased, to say the least!). The menu includes options for dishes you can request, or you can choose to be surprised. I wanted the full experience of not knowing what I was eating, so I chose the vegetarian surprise 3-course meal, and specified that I was vegan. And of course my cocktail had to be a surprise, too! I highly recommend a visit to O.Noir if you’re in Toronto!

Toronto is a deceivingly large city, and it took quite a bit longer to get around than we (or at least I) expected. We managed, nevertheless, to see quite a bit. We found a cute AirBnB in the High Park North/The Junction neighborhood, and ventured into other communities across the city.

All of Toronto is well-cared-for. I was hard-pressed to find a single cracked panel of sidewalk—the sidewalks were immaculate (the roads, however, could use a little more love =P). There was graffiti, though more often than not you would see street art and not just tagging. Home renovations throughout the city are carried out with care and attention to design…like really good design. You don’t see those sort of upgrades in the US, where contractors, as opposed to architects and designers, use cheap materials and shoddy construction.

I love to spend time exploring neighborhoods when I travel. For the most part, we skipped the “attractions” like the CN tower; opting, instead, to check out Chinatown, Kensington Market, St. Lawrence Market, the Distillery District, and Parkdale.

To move about the city, we walked, took cabs/rideshares, and biked.

One of my favorite ways to explore a new city is by bike. It’s zero-emissions and low-impact, it keeps cars off the road, it lets you get off the road (you can go from city street into the heart of a park in seconds), and cycling allows you to move at a pace fast enough to get you around efficiently but slow enough that you can still soak in your surroundings.

In most big cities now, you can find a bikeshare system, which allows you to rent bikes on a short-term basis. (If there isn’t a bikeshare, you can probably still find a good ol’ fashioned bike rental.) I highly recommend it! 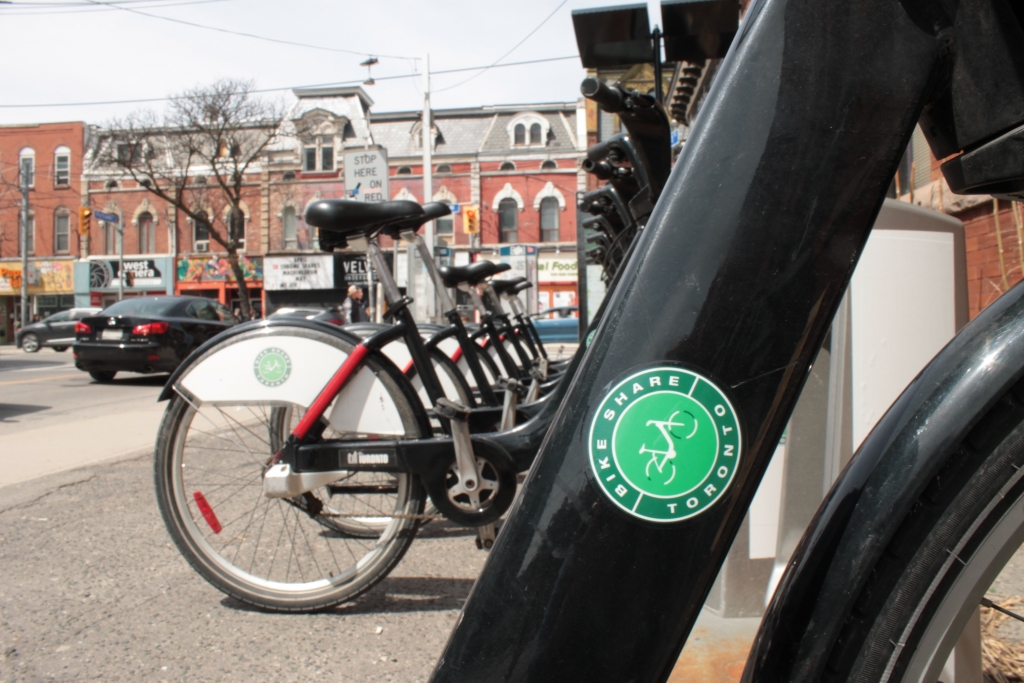 In Toronto, I signed up for a day pass with Bike Share Toronto for $7 (Canadian dollars). Your first 30 minutes of each ride are free. After that, the price goes up for every 30-minute increment of time with the bike. With the app, you can see where stations are located for returning your bike, but I knew I was going to well-traversed areas and ended up just finding a station near my destinations anyway. My first ride was under 30 minutes, so it cost nothing. My second ride was about an hour, so it cost me just $1.50—for exercise, sightseeing, and quick travel! It’s super cheap and a fun way to explore a city—just be familiar with the traffic laws of your destination and be mindful of drivers (just because motorists behave one way where you’re from doesn’t mean that drivers everywhere behave that way!).

Some of my favorite sights and attractions from the trip included the Parkdale area, Kensington Market, St. Lawrence Market, and the Distillery District.

If you’re caught up on the latest vegan news, you may have heard about a vegan neighborhood in Toronto called ‘Vegandale.’ Well, it’s not an entire neighborhood (unfortunately), but it’s a stretch of Queen Street that features a concentration of vegan businesses. The folks behind Vegandale claim it’s “a mecca for the ethically minded and hungry, with the best of vegan food, goods, and services co-existing on one city block.” It was great to see the synergy and collaboration of vegan businesses. I do wish I had more time to talk with the community, however, as vegandale is really just a layered label for the underlying Parkdale neighborhood. I’m sure a particular layer of community dynamics exists between the existing Parkdale residents and businesses and these relatively recent businesses. My hope is that there’s been an effort to really build upon and elevate the underlying community; but my concern is that the new vegan businesses have few and weak ties with the existing Parkdale community. Nevertheless, I enjoy the idea of the area, loved my meal from Doomie’s, and I liked walking around. Sadly, when I went to visit the vegan shop The Imperative, the sign on the door shared some disappointing news: “closed due to flooding issues.” It looks like this is just something I’ll have to experience on my next trip!

Beyond Parkdale, I loved visiting Kensington Market for the vibrancy and diversity of food businesses. This was the most active area of the entire city that I experienced on my trip, by far. People, cars, bikes, scooters…all weaving between one another in a carefully choreographed yet entirely spontaneous dance. I popped into Bunner’s Bakeshop to pick up some amazing baked goods and had a bit of ice cream from Cosmic Treats! 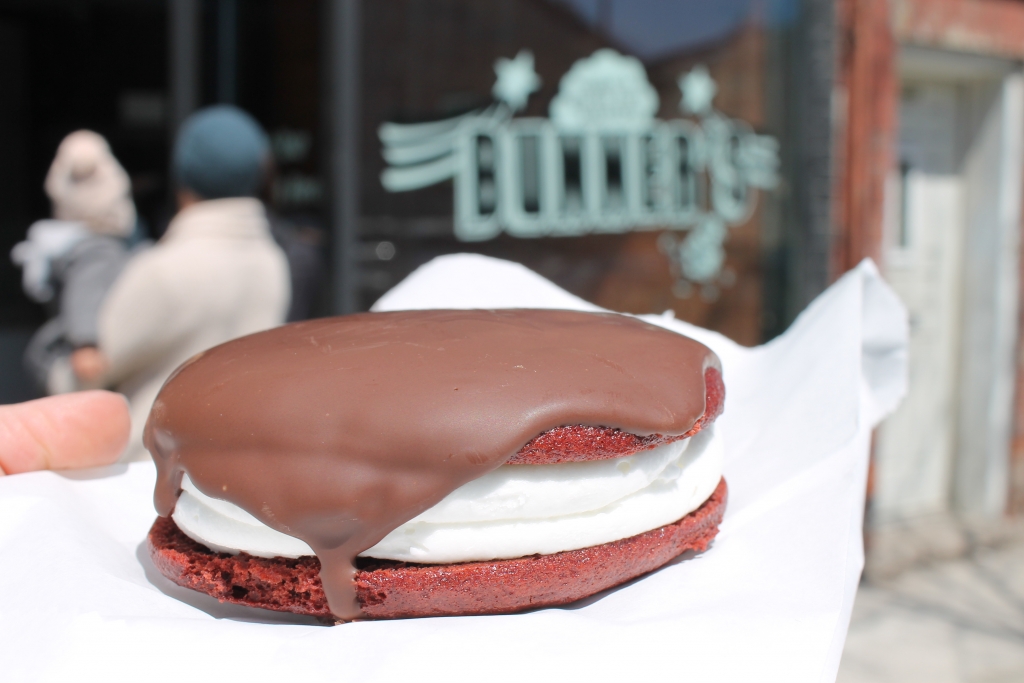 On Saturday, we went to St. Lawrence Market, which is Toronto’s public food and produce market. I was pleasantly surprised at the number of vendors selling vegan baked goods (even vegan waffles!). I ended up grabbing a non-dairy yogurt jar from Urban Fresh Produce. The North Market was great for produce and vegan baked goods, and you should definitely hit up Manotas Organics and Fine Foods for their salsas and guacamole. Be warned, though: this is a market that sells animal products and it will not be easy to avoid seeing or smelling meat. 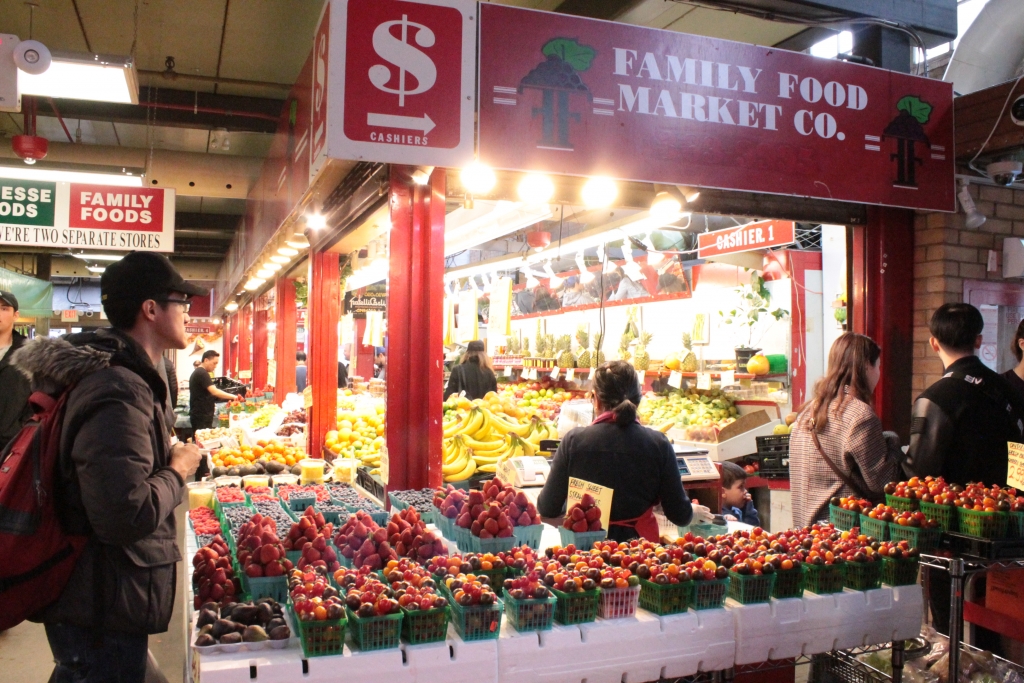 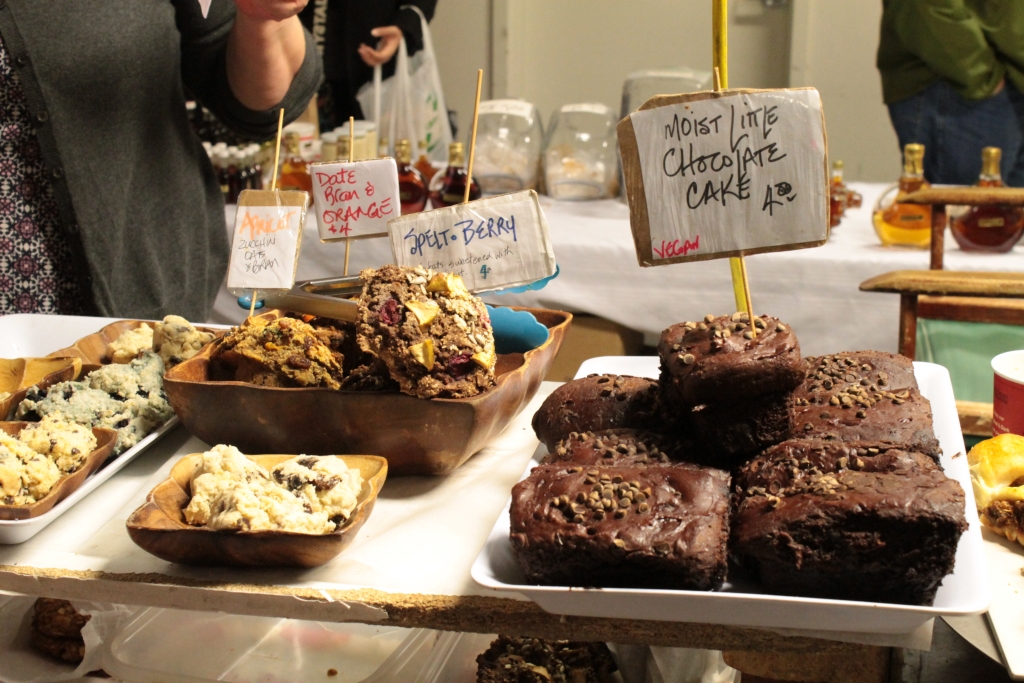 One of the many vendors selling vegan baked goods at Toronto’s St. Lawrence Market

After the St. Lawrence Market, we strolled over to the Distillery District, where we hit up an art gallery, a tasting at Spirit of York Distillery Co. (where I tried aquavit for the first time and LOVED it!), and nom’ed on some chocolates from SOMA Chocolatemaker. 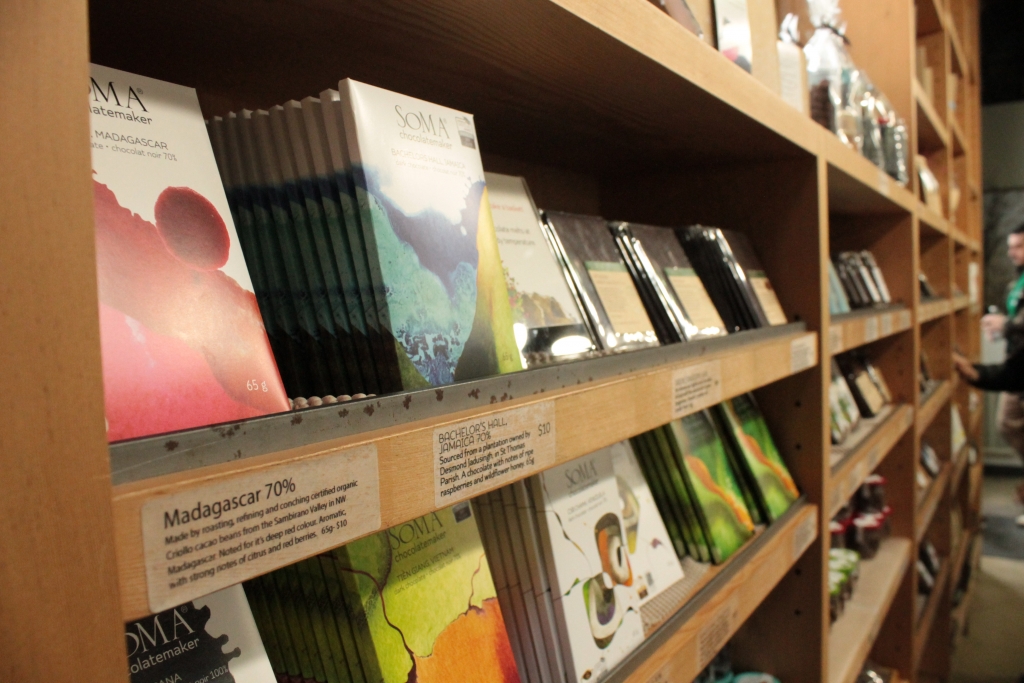 SOMA Chocolatemaker has a great selection of vegan dark chocolates

It’s a shame that I didn’t discover this until literally minutes before we departed, but the Toronto Vegetarian Association produces a Toronto Veg Guide. I found a copy at Bunner’s Bakeshop. The 17-page pamphlet covers restaurants, cafes, bakeries, cooking classes, shops, and more. It looks like a great resource. Even though I missed out on this insider information before my recent trip, I am glad to have a copy to use for my next visit!

Also, because this trip was really for my friend who had planned out our activities for most days, I spent very little time looking at things I could do. Which is why I failed to realize I was in Toronto the same weekend as the Veg Sprint Market, and just a week early for the Toronto Veggielicious culinary celebration (a.k.a. a veg week)! I really ought to do more planning!

But my biggest noob mistake of the trip was not looking into business hours. I had a chunk of time one morning that I set aside to explore vegan businesses…unfortunately, none of those businesses opened until 12!

I absolutely would love to visit Toronto again. With any luck, it won’t be that long, either. The food was great and there is still so much I wish I could have seen. Next time, I’ll be more prepared to think of business hours and to look at vegan events ahead of time!

Have you been to any of these spots or others? I’d love to hear about your trips and what you enjoyed most!