What to Know Before Visiting Phuket, Thailand 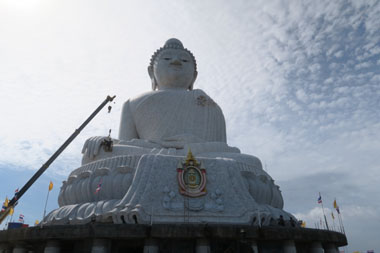 I feel like there are a few things that we should chat about if you’re thinking about going to Phuket to get the Thailand experience. I don’t want you to book an expensive ticket around the world thinking Phuket is the place to be if you want to get a good feel for Thailand, because this tourist-flooded part of Thailand is nothing like the other parts.

I had an idea of what Phuket was like, but I didn’t realize just how different it really was. This should be pretty quick, but I hope it’s informative enough to help you make the decision if Phuket really is where you have in mind when booking your trip to beautiful Thailand! 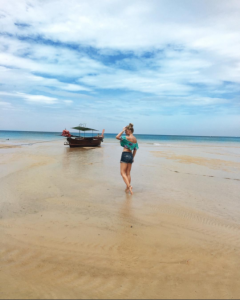 If you aren’t familiar with how the bartering system works there and how you have a high chance of getting ripped off, I suggest doing a fair amount of research before arriving. Bartering is part of the Thai culture and it is something to get used to and possibly master. I had a feeling that the journey from the airport to our accommodation would be expensive, so I wanted to make sure we were getting at least the best rip-off available.

In Chiang Mai and Bangkok, Uber was available for insanely cheap. Riding around Chiang Mai was never more that $1.50 (about 53TBH). Even if you don’t want to take Uber, songthaews (AKA, the red truck taxis) are always an option, or traditional tuk tuks. Not only to and from the airport, but they are available at street corners, busy intersections, they’re really there whenever you need them, and they’re there bugging you for a tuk tuk even when you don’t. There really are so many inexpensive transportation options that it doesn’t ever cross your mind what you’d do if there wasn’t anything available.

In Koh Phangan, the main way to get around is renting scooters. We rented ours for the entire week we were there for about $4.50 per day to ride them around the island as much as we wanted. Again, another place that is easy to maneuver.

Then, there is Phuket. Where a taxi ride can cost around 800 TBH to Patong, or 900 TBH to Kamala. Metered taxis are an option, but they’ll act like they don’t exist as they tell you an outrageous flat rate. There is an option to take a minibus, but this only goes to specific areas. The minibus to Patong is 150 TBH and it stops halfway at a tourist shop to get people in the van to buy tours.

Once you’ve arrived to the area you’re dropped off in, it is probably best that you stay there. It is so difficult to find any kind of local transportation, at least for a decent price. Taxis need to be booked at tourist booths, and the haggling begins. Songthaews are pimped out with flashing lights and music, and they’re parked along Patong Beach. We tried to go less than half a mile in one of these songthaews, and they wouldn’t settle for anything less than 200 TBH. That is more than the 22 mile minibus journey. It just doesn’t make sense. 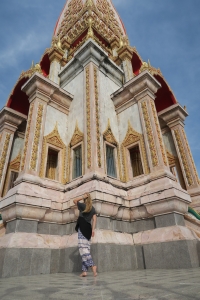 This leads me to the prices of things.

Yes, food and some things are still much cheaper than they would be anywhere outside of Southeast Asia. However, the feeling that you’re getting away from restaurants and markets practically stealing because of how cheap everything is… that doesn’t exist here. For example, a pair of elephants pants in Chiang Mai were 100 TBH, the same exact pair at a market in Phuket were 250-300 TBH.

Then, let’s touch on tourist level.

In Patong: Well… it’s high. I was there a bit before Christmas all the way through the New Year. Imagine Santa Monica, but in a more concentrated area. There is a mix of young party-ready people as well as families and couples of all ages. 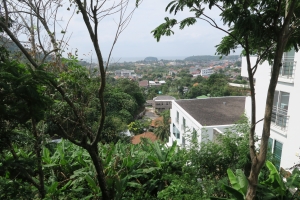 In the outskirts near Big Buddha

In Patong: The locals here are in constant work-mode. They are trying to get you to ride in their tuk tuks, eat at their restaurants, buy their shirts and trinkets. I learned a handful of words in Thai during the time we spent up north, and when I tried to speak to the locals they scoffed, laughed, and ignored me. Maybe I suck at speaking Thai, totally possible, but I have a strong feeling that had nothing to do with it.

In Kamala and Karon: The locals here were very kind. They’re still very business-minded, but they are happy and helpful like the people up north. I spoke the same Thai to them as I tried speaking to the locals in Patong and they actually understood and responded positively. 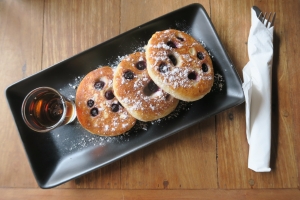 One of the only labeled “vegan” dishes in Patong

If you’re planning on coming to Thailand because you’ve heard how vegan-friendly it is, people aren’t talking about Phuket.

The first day I arrived, someone saw my vegan stickers on my laptop and was so excited to ask me where to go for food because she wasn’t able to find anywhere with vegan options the whole time she was there. Unfortunately, I had no idea what to tell her because I was stumped with my research. There was almost nowhere to go on the east side. The only places I could find were in Phuket town and a couple spots heading east. Obviously, modification to dishes is always an option, but not what people are hoping to have when they have heard how vegan-friendly Thailand is.

Don’t get me wrong, there are so many amazing things to do in and around Phuket, but I’d try to get off of the mainland as much as you can. Go snorkeling, go on an excursion, go to the Phi Phi islands, anything. Phuket is a great hub for taking advantage of this beautiful part of the world, but there are other beautiful, inexpensive, and vegan-friendly islands in Thailand if you’re simply looking for a place to go, such as Koh Phangan.

I hope I didn’t burst any bubbles, but I’d hate for you to learn the hard way. Let me know what you thought of Phuket and please tell us if there are any spots that are better that we just missed out on!