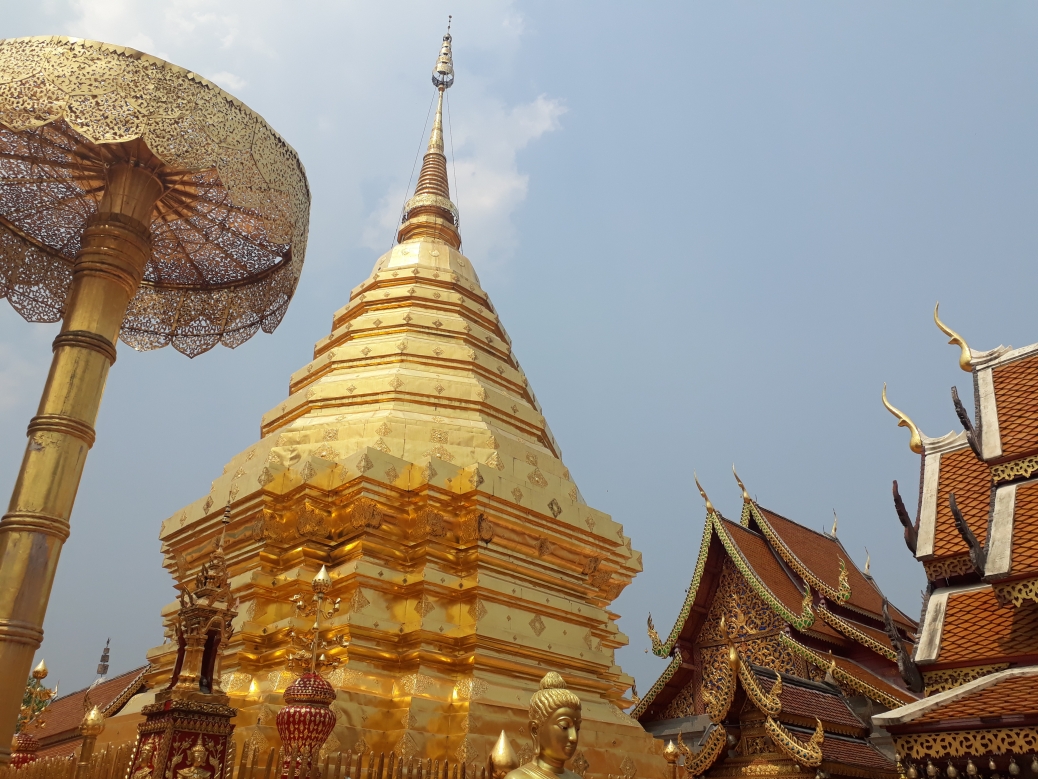 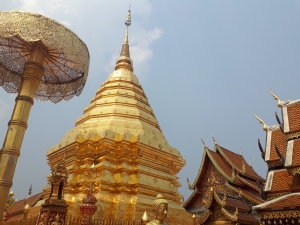 Unbeknownst to us, we saved the best of Chiang Mai for last. Carved into the mountainside to the west of the city, Doi Suthep is spread over different levels and houses various native villages, temples and other attractions. If you look west at night from almost any part of Chiang Mai, you’ll see their lights twinkling away romantically like some mythical hilltop kingdom. Which it is, essentially. So far we’d put this journey off due to laziness, but on our last full day in Chiang Mai we hired a Songthaew and headed for Doi Suthep.

What seemed like the blink of an eye later, after being thrown around in the back of the pick up, we were there. In fact, the journey seemed so short that I had to check my gps to be sure that the driver hadn’t short changed us – he did, not on distance, but instead by pretending that he hadn’t understood the original 100 baht per person sum he had agreed to and demanding twice that. We settled on 150.

The temple at Wat Phrathat is overrated. Yes there’s more gold than Mr T’s neck, but after the climb up the stairs, entrance fee (30 baht) and wandering around several things struck me:

The sheer number of tourists is an annoyance. Yes, I am also a tourist, but I didn’t fly to the otherside of the globe to do battle with a selfie-sticked hoard of often disrespectful or lacking in self-awareness day-trippers. On the way up the stairs a very loud American woman was giving the whole of Asia her thoughts on the contemplative life of Buddhist monks: ‘uhhh, they just, like, do nothing. They, like, change their clothes and shave their heads. That’s it. They have nothing going on in their lives. Like, uhh, what a waste.’ 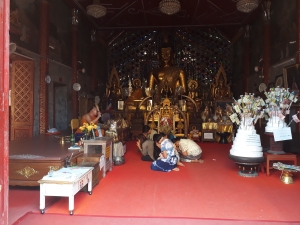 Wat Phrathat is also an active temple so tourists mingle with worshipers. While our hosts were gracious, it always feels somewhat intrusive to be wandering around with seemingly every other tourist in South East Asia, gawping and snapping pics, while genuine worshipers are forced to vie for enough space to make their oblations.

Litter. There’s a lot of it lying around. Not in the temple itself, but so many tourists naturally mean the edges and nooks of the complex have started to collect plastic and other detreitus. Again, this isn’t the fault of our hosts. 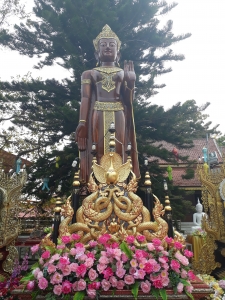 After a quick look around Wat Phrathat, we decided to take the trail to Wat Pha Lat. It’s at this point that I urge you walk at least one way. Both can be steep and moderately demanding, so there is little to distinguish the ascent from the descent as far as difficulty goes, but the jungle trail and the temple at Wat Pha Lat were the highlights of our stay.

Setting our sights on Wat Pha Lat, we set the gps and thankfully a local running/hiking group – looking like a futuristic millennial reimagining of the movie Blade Runner, but from a universe where the only material still available to humanity was lycra – were at the start of the trail to mark it out, else we wouldn’t have found it.

The trail opening is steep and inauspicious, flanked on one side by the local fly-tipping site, with bags of rubbish and old sofas thrown in a shallow gully, and the trail on the other, which looks like a cliff edge. Upon closer inspection we found footholds of sorts cut into the dirt. This first bit and the last section of this trail before you rejoin the road by the waterfall were by far the steepest, the rest is a steady downhill. 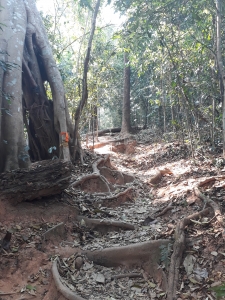 First section of the trail

A mix of tree roots and well-worn footholds aid your descent through the jungle, as the trail wends its way down the moutain rejoining the road at a waterfall just before Wat Pha Lat. Aside from the power lines that cross your path intermitantly, presumably so the monks can charge their i-Phones, and the occassional noise when the path cuts too close to the adjacent road, it’s just you, the trail, a few lizards and the mozzies. Bliss. 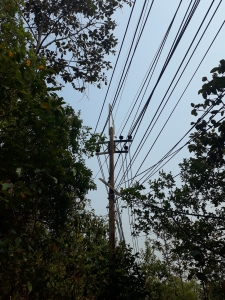 I am far from spiritual but being alone in nature, especially in a place as alive as a jungle, provides even old atheists like me with as close to a transcendental experience as we are likely to come. That wasn’t the last time I’d be feeling at one with nature, as I reluctantly rejoined civilisation for the short trek along the newly tarmacked road to the temple. 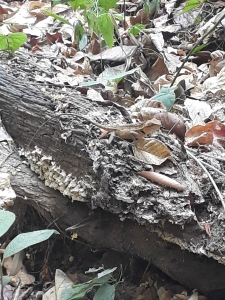 Wat Pha Lat is a magical oasis of calm and easily my favourite temple. There are signs everywhere imploring visitors to remain calm. I am just not sure quite why they would be deemed necessary. It would be quite the feat to become even mildly agitated in such a relaxed atmosphere. Wild terrapins swim in the river that runs along the western edge, untamed black chickens with metalic-blue flecked feathers roam the grounds seeking out grubs and insects in piles of dry leaves, butterflies glide in its skies. The temple complex itself is relatively small. A few buildings split over multiple levels with meditation platforms and terraces. Yet what sets it apart is the peaceful, understated nature of the place. The scent of the jungle, wildlife and energy of Wat Pha Lat (hey, I am about as spiritual as an Ikea flatpack manual, but this place has a certain ambiance) all instil a deep calm. 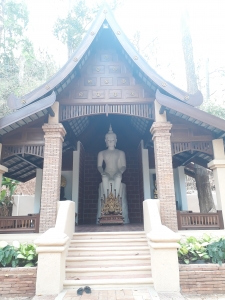 The second part of the trail wasn’t on Google maps. I was sure it had to be there, but Google insisted on routing us back down the road. One or two hikers appearing to the edge of the river alerted us to the trail and after breathing in the last of Wat Pha Lat we disappeared into the jungle once more. 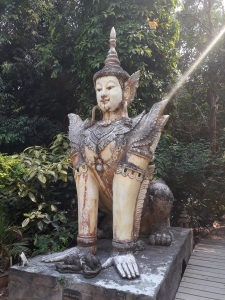 Statue at the gate to Wat Pha Lat

This time the jungle was even denser, the scents wilder, the vibrations even more vivid. At almost every step, tiny brown lizards shot out from underfoot. Occassionally, managing to dine on a fly or beetle as they scurried away. More than once they seemed to stop and observe us as intently as we were them.

We were now on the Monk’s Trail. A path older than time itself. Long before the road, this was the only means of reaching the ancient encampments high above Chiang Mai. There were various stations along the trail, with signs offering history or information about surrounding area and its flora and fauna. One simply urged visitors to close their eyes, fill their lungs and to listen. I can’t convey in language quite just how powerful this was. Your lungs and ears filled with the forest and your eyes subordibate to the other senses, you have no option but to just ‘be’. It’s as close to feeling ‘at one with nature’ as I am ever likely to get. 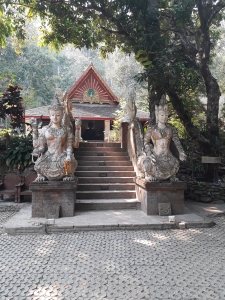 Later on down the mountain as the deciduous trees gave way to evergreen (or so an information board told me) there was the remains of an old temple. Aside from the clearing and a few rocks, there wasn’t much to see. It pre-dated the La Na Kingdom of Northern Thailand (13th – 18th century) and so can be forgiven not having survived the onslaught of time and nature. 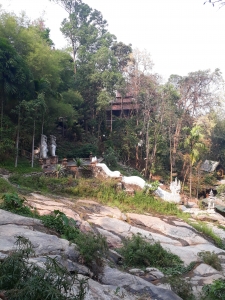 Human activity on the trail pre-dates even this old temple, with the ancient people making the pilgramage up the mountain to appease their spirits – something locals still do to this day. 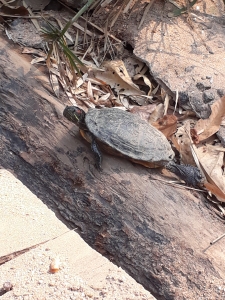 Terrapin buddy! Seen them in the Regents canal, but never in the wild

Passing over a sheet of exposed rock and a dry gully that I can only imagine roars during monsoon season, we were confronted by man-made arches denoting the start of the trail. Or the end of it for us. We left Eden with perhaps heavier hearts than Adam and Eve, as the lizards and leaves were replaced by asphalt. 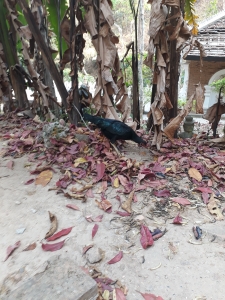 The Monk’s Trail can be reached by following Suthep Road to the east of the city. As an added incentive to walk up and down, Bee Vegan and Ice Love You are on the same road, so you can enjoy some Thai curry and some vegan ice cream when you’ve finished. Just like the ancients did.