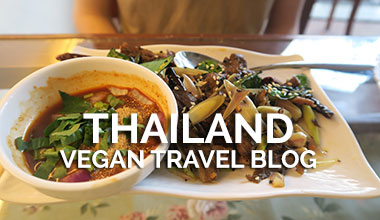 Could it be that it is already time for another round-up? Yes, yes it could. Could it be that I am once again agog and aghast at how quickly my time in a given country has gone by and that I’m baffled and don’t know where to begin? Yes, yes it could! And it is! I feel like I just got to Thailand yesterday! This is ridiculous! I demand the world stop spinning so quickly! No? Okay, better just write my round-up, then.

It was so, so, so, SO easy being vegan in Thailand. It was something that I almost didn’t have to think about. I’m not saying that there was a vegan restaurant on every corner or anything like that, but we had options EVERYWHERE. I said in a previous blog post about Thailand that we spent our first few days staying with the ever-lovely Joy at U-baan in Bangkok. She told us about all the tips, tricks, and useful phrases that we needed to know to fill our bellies up with delicious vegan food while in Bangkok. She also gave us a map and circled some places for us to go. It was great having a guide when we first got there and I hope that I can pass on enough of Joy’s knowledge to you so you feel like you have a guide, too. (Though you don’t really need one, so I’ll mostly be gushing! (; ) So here we go! 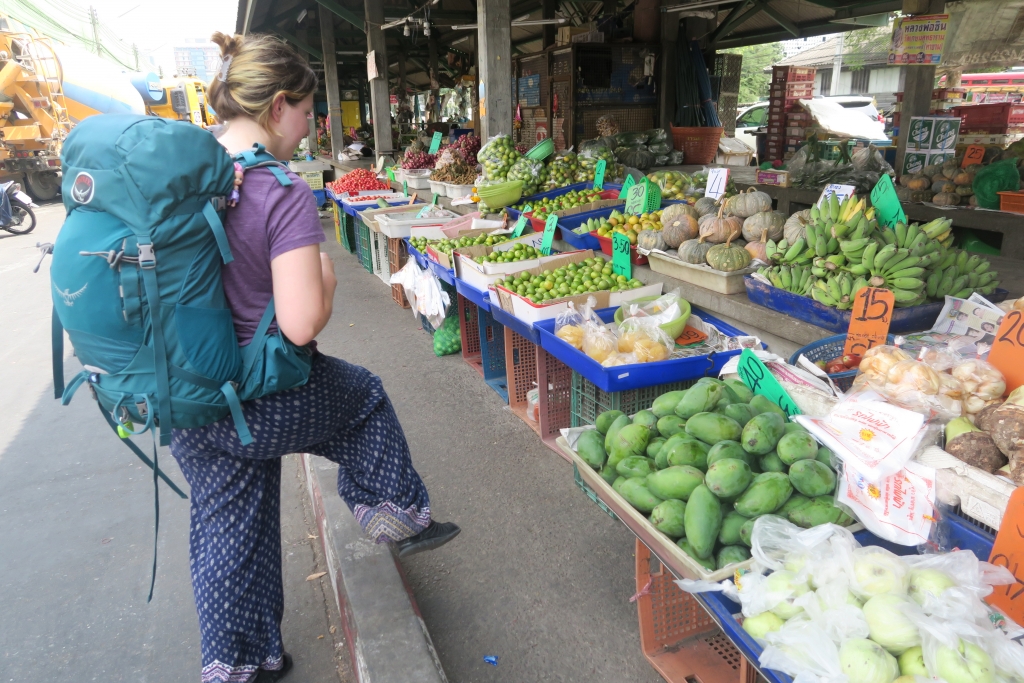 Markets
Yes! I love markets! The last country we were in was a bit void of vegan-friendly markets, so Thailand’s bevy of lively and colourful fruit and veg markets really got me excited! There were every day markets, nightly markets, floating markets, markets by the train stations, and special markets which happened only once a week, etc. They were just everywhere! Many of them had a few stalls for food and then loads of stalls with inexpensive souvenirs, clothes, handmade soaps, etc. Obviously, I’m more excited about the food, though, so I’ll focus on that. You know how sometimes you’ll be shopping, and you’ll see a fruit that you’ve never seen before? It’s super expensive, but it looks so exotic and interesting and you really really want to try it so you get it anyway and then it doesn’t taste like anything. The markets in Thailand are the much more fullfilling version of that. Because they don’t import any fruit aside from apples, the fruit you can get at the market are all local, so really really inexpensive. When you buy that weird looking fruit that you’ve always wanted to try, you can rest assured that the money that you do spend on it is going towards the local economy and that is always a bonus. You can also rest assured that it will taste completely different from the imported version of the same food. I am specifically talking about Dragon Fruit here because of a very expensive and utterly disappointing purchase of it in the UK compared to an incredible flavour explosion purchase of it in Thailand. Seriously, if you don’t like the imported version of something, try it local. It can really surprise you. Right, I got caught up on the dragon fruit thing, but they do sell other stuff at the markets! It’s a really good place to buy a healthy snack before you jump on the train. You can also almost always find some young coconuts being sold in the markets. These vary greatly in price depending on whether you’re in a tourist-y area or not. However, they’re always cheaper than they are back in the States or the UK and they’re always a good healthy and hydrating drink! We were drinking/eating young coconuts every day for a while there. Another good thing to try at markets is the blended fruit. It’s just fruit, sugar, and ice, so you know that it’s vegan and it’s so so so delicious. I recommend banana-mango. In short, go to the markets, which are everywhere, and go wild. It’s a fruit paradise. 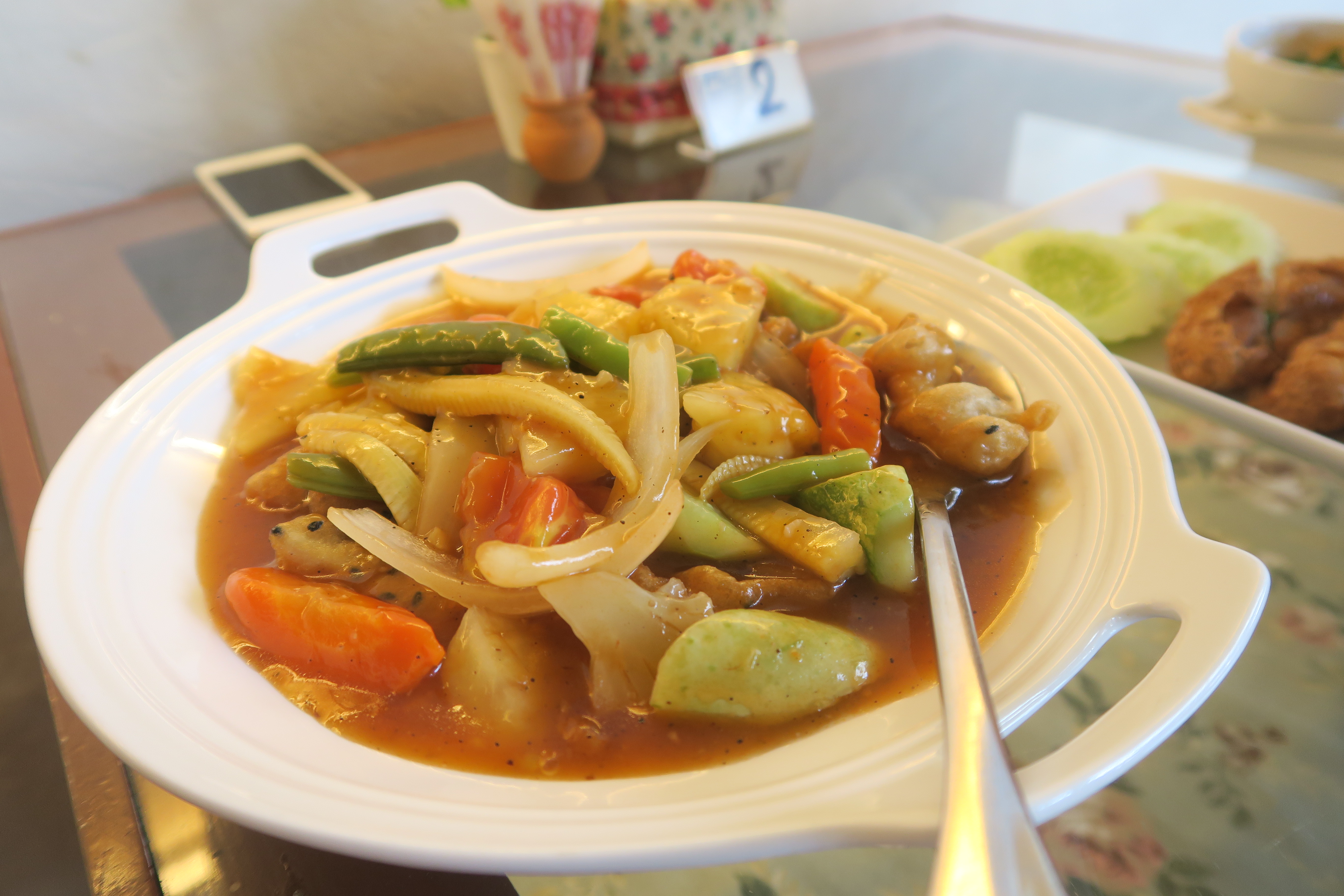 Dining Out
I’m not entirely sure what I expected of Thailand when it came to dining out, but it certainly wasn’t that it would be cake. Or that there would be cake. Both of these things came to pass, however. There are lots of vegetarian restaurants with vegan options and a handful of completely vegan places, one of which is an amazing bakery called Veganerie. A google-search of “vegan near me” in Bangkok brought up a ridiculous amount of options, so we were able to choose based on prices and reviews instead of just “this is the only one in town.” There were even vegetarian stalls in the food courts of the malls in Bangkok, which I haven’t even seen in New York yet. (Maybe it exists and I’ve just missed it, though!) I thought that maybe it was so easy because we were in a big city, but then we took the train to Konchanaburi and found an almost entirely vegan place just a stone’s throw from our accommodation. Then we went to Chiang Mai, which is still a pretty big city, but not nearly so busy and big as Bangkok. There were loads of options for us there, too. From Bodhi Tree to Taste from Heaven to Alice’s Organic Vegetarian Restaurant, the options are there and they are very different from each other so you even have a choice of what kind of food you’re in the mood for. This is good, because you will probably be dining out for every meal. I know, it doesn’t sound doable in budget or in variety, but it is! Thailand is one of those places where it is actually a hell of a lot cheaper to dine out than it would be to make your own meals. It’s a good thing, too, because it’s hard to find a place to stay with a kitchen! Dining out at veggie places is pretty easy for vegans. The biggest thing that you have to look out for is egg. Once you explain that you’re vegan, staff usually know exactly what that means and it’s smooth sailing from then on in.

Eating at Home
Ohp, sorry, this section has been rendered completely irrelevant by the fact that people don’t really cook at home in Thailand, we didn’t, and you probably won’t either. Please enjoy some extra pictures of food we had in Thailand as consolation. 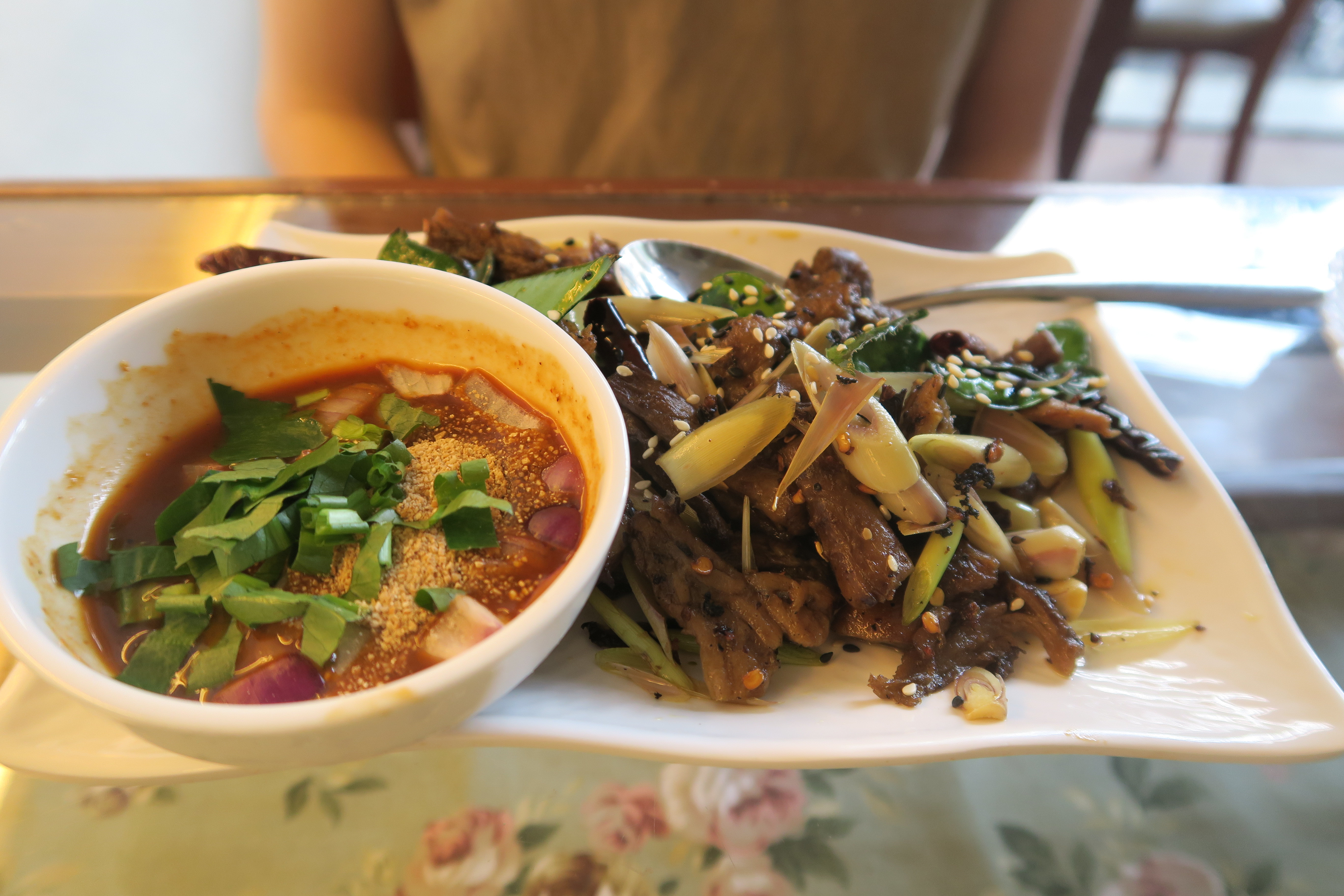 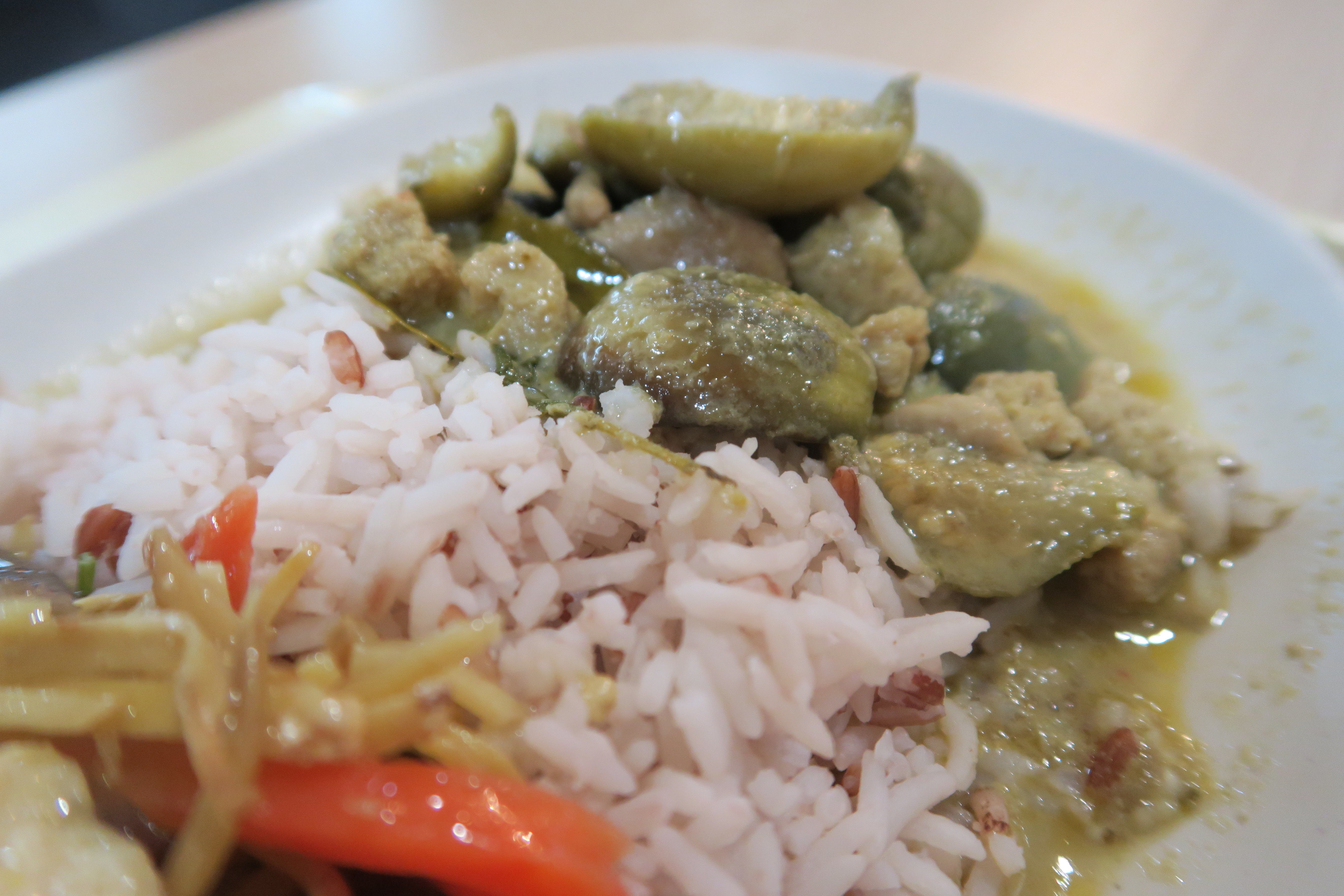 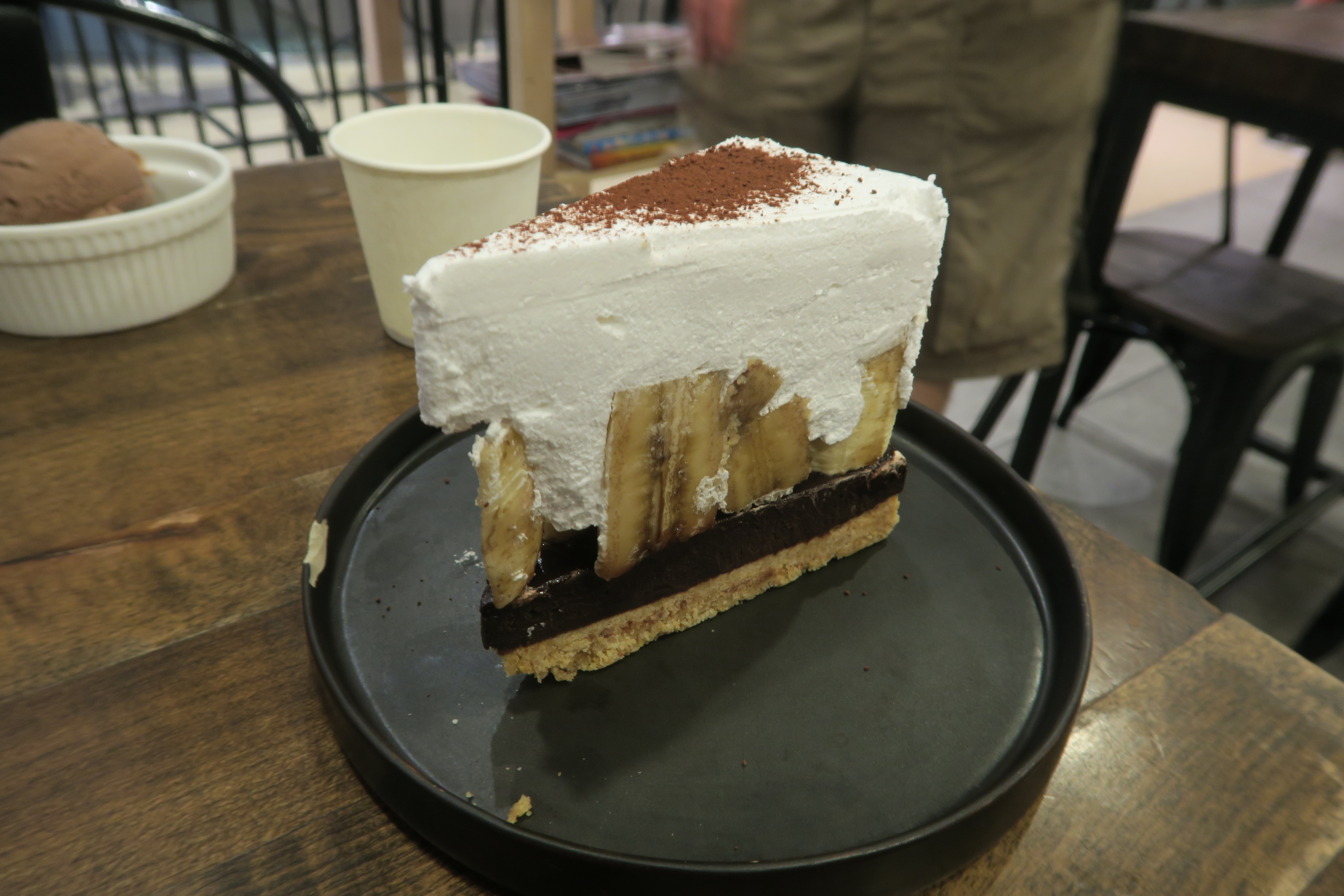 I miss Thai food already. I only hope that Europe is as easy for vegans as Thailand was and I can’t wait to find out!