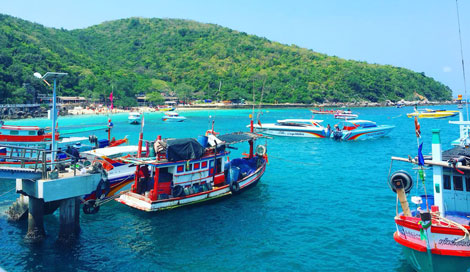 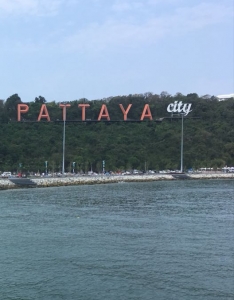 Pattaya. Don’t go there. Ever.

It’s hard not to find anything redeeming about a place, but I am struggling here.

Pattaya. Pattywood as the fake unHollywood-esque sign on a mound of shrubbed dirt seemingly all of 10ft above the city screams out. As if you could ever forget where you are, and if you did manage it, be it through drugs or amnesia, as if you’d want to be reminded. 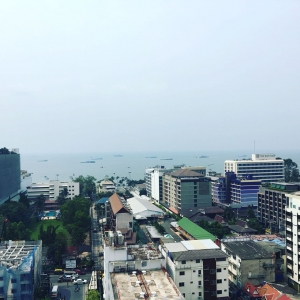 So how did we end up there? It was very much a Withnail and I ‘we’ve gone on holiday by mistake’ moment. We’d seen a German TV program about it but done little in the way of research. Pattaya had a theme song that they played at every opportunity on the show. A song that is so awful and yet so infectious, that I can only liken it to the sonic equivalent of some tropical brain-eating virus. Predictably, it became lodged firmly in our heads.

Content warning:
The video below contains subject matter that may be disturbing to some viewers.

Originally intending to go to Koh Chang, but waylaid longer than expected in Bangkok due to illness, and with one of our number needing to catch a flight in a few days to Singapore, yet all of us craving some of that legendary Thai island magic, we settled on Ko Lan.

Accomodation on the island was out of our price range, but with regular ferries from Pattaya for 30 baht each way (90c), we figured we could do worse than base ourselves in Pattywood. 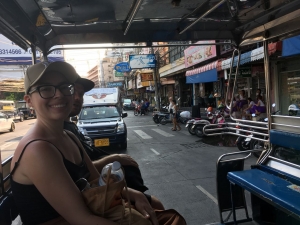 We had little in the way of preconceptions upon arrival, aside from said documentary on German TV that gave it a vague Costa del Crime feel (it seemed as if anyone who’d ever done a stretch in German jail had ended up trading it upon release for Pattaya). Our room was up several flights of stairs above a bar on a main road to the south of Walking Street. It was hardly the Ritz and it seemed to double as a social club for families of bloodthirsty mozzies.

Still, we resolved to make the best of it. Our host was pleasant enough and it wasn’t until she made an off-kilter remark about the room’s security (our door had a flimsy padlock on the outside for when we went out and an intruder chain on the inside, presumably so we could buy ourselves enough time to identify our murderer before he did us in) that we started to google. Our research made for sober reading. Pattaya was designated the murder capital of Thailand amongst other undesirable things.

The consensus seemed to be that tourists were safe as long as they weren’t out in the early hours on the hunt for illicit drugs/sex. With our appetites confined strictly to sun and vegan food, and hunts for both day or early evening affairs, we breathed a hesitant sigh of relief. 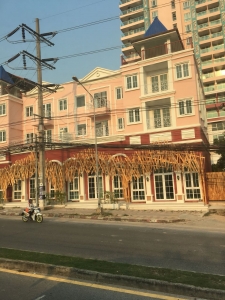 Random shot of building near our first apartment

We didn’t actually get to judge for ourselves how safe Pattaya was on the first night, as the water pump in our room failed and after an endless parade of people in and out, scratching their perplexed heads as to why the water didn’t work, we were moved to another room further south near Jomtien beach. 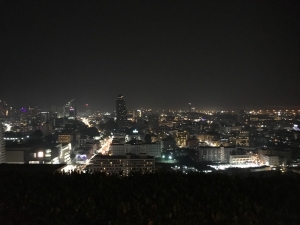 Pattaya by night shot from Base Pattaya

Our second room was much improved. At least, to begin with. Reminiscent of a boutique hotel or mid-range Ibis, the water flowed and there were no mozzies. After grabbing a beer from the local 7/11 we decided to shower and hit the hay. Only instead of the water not working, this time we suffered the opposite problem – the shower refused to drain, flooding the bathroom and making going to the loo in the night somewhere between a mini Poseidon Adventure, an episode of Flipper and a trip to a budget water park.

Next day we landed on our (wet) feet, receiving a refund from our apologetic host and refusing in the politest terms her offers to move us yet again (back to Mozzie Mansions that would later that day get a new water pump, apparently). Instead we had already booked a new Air BnB in the swanky Base Pattaya, a centrally-located 30 storey modern apartment complex with gym and rooftop infinity pool. 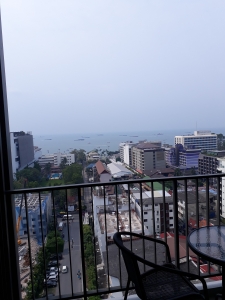 Our 15th floor apartment was upgraded free of charge by our host to a two room. The balcony and master bedroom had stunning views – in that, yes, they still looked out over Pattaya’s sewage-filled bay, but being on the 15th floor made everything seem tiny and not quite real. The kite-surfers being dragged along behind speedboats seemed like dancing moths. (Being trapped between recklessly driven powerboats and the hepatitis-filled waters below must’ve been quite the thrill.) The noise and party sounds from the street below were muted and distant. 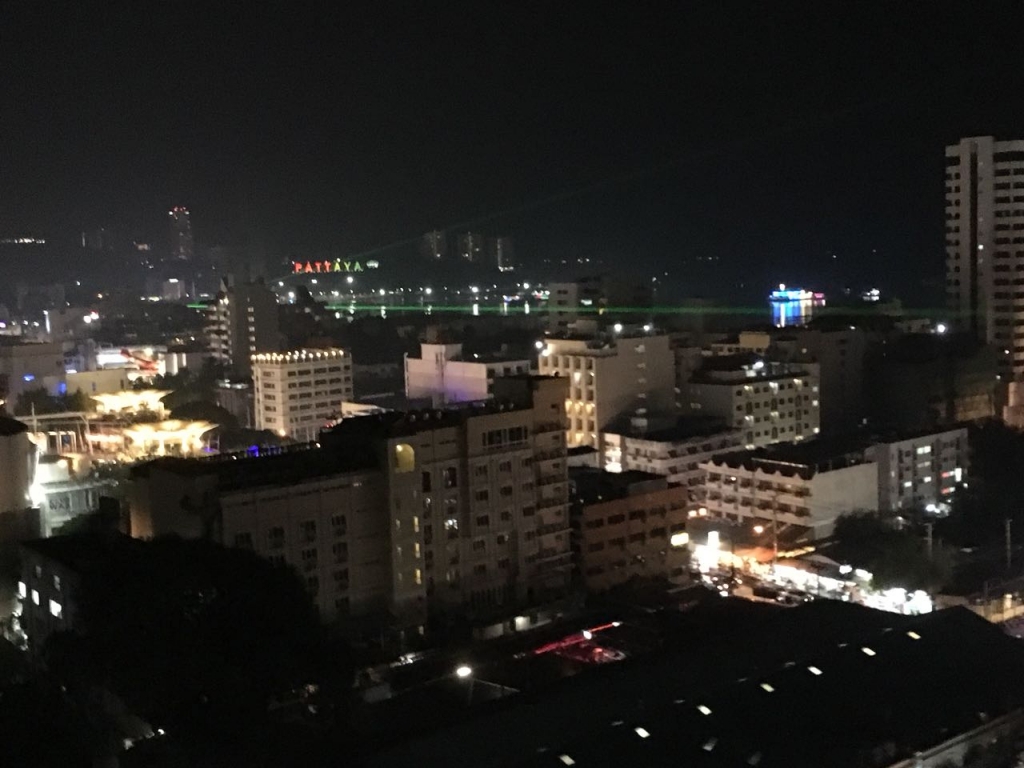 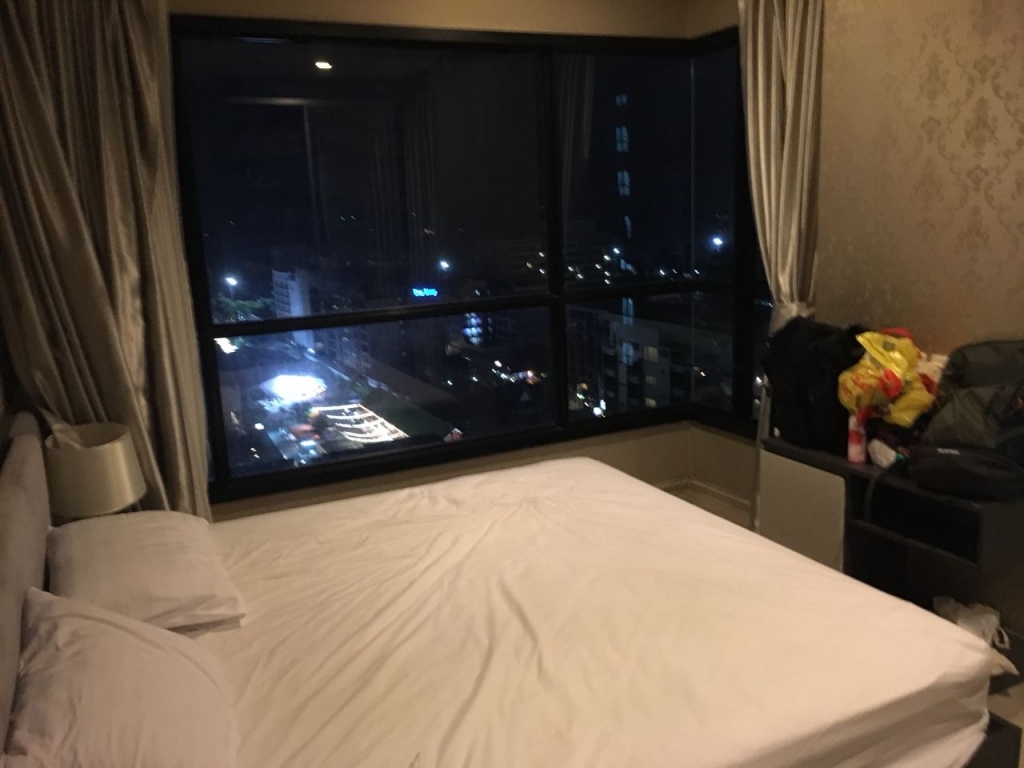 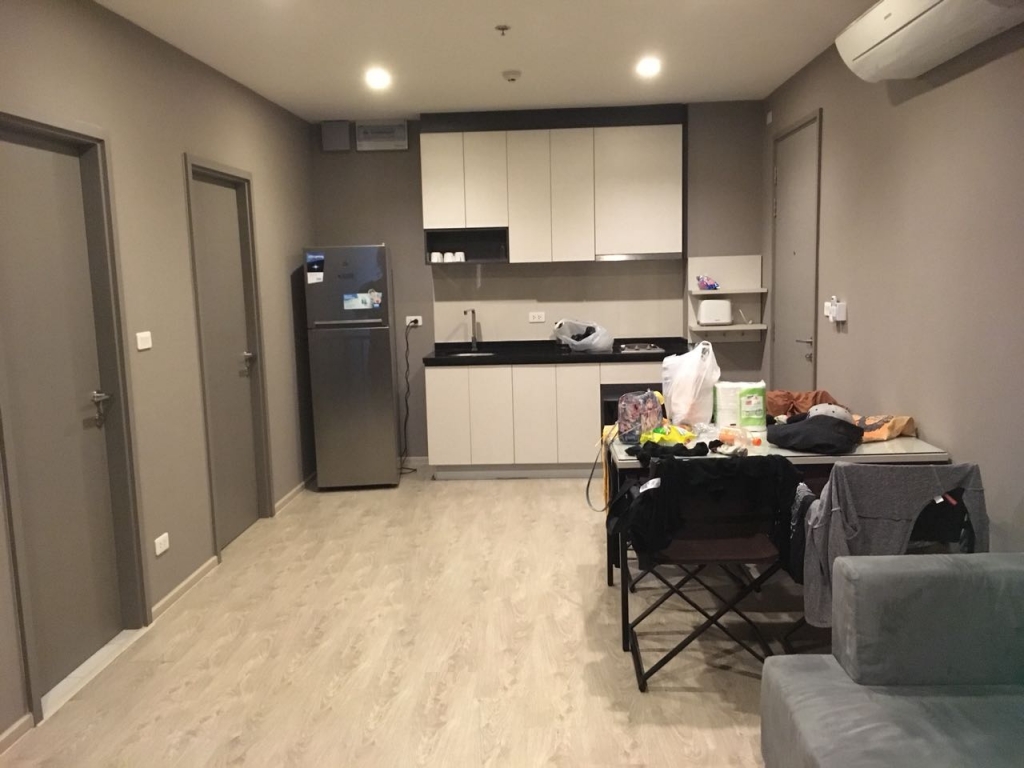 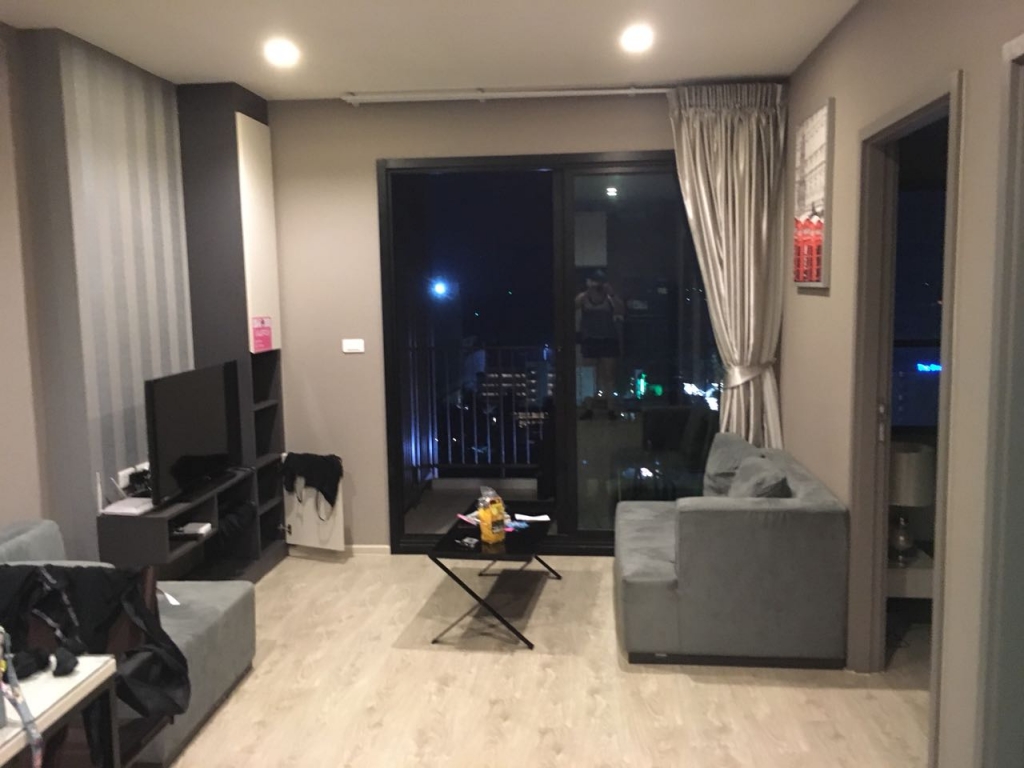 Pattaya itself is a cultural wasteland. Like Benidorm or Alicante before it, the once tiny fishing village had become a mecca for sunburnt and bloated Europeans. Primarily older males seeking to exploit the economic disparity and snag a Thai woman 40 or 50 years their junior, eat egg and chips and drink warm lager beneath a picture of the Queen in a hole-in-the-wall British bar. In short, hell can’t be much worse.

There is a vegan scene of sorts, but after walking a few kilometers to find one restaurant shut and a few more kilometers in the blazing sun to find another inexplicably closed (something we have come to expect in Thailand – never trust the opening times) we decided to explore other avenues.

Pattaya’s one saving grace was its curry. Having lived in Germany for 3 years, and with Germany being to curry what Pattaya is to culture, it was a joy to discover a thriving indian community and fully-veganisable South Indian food. 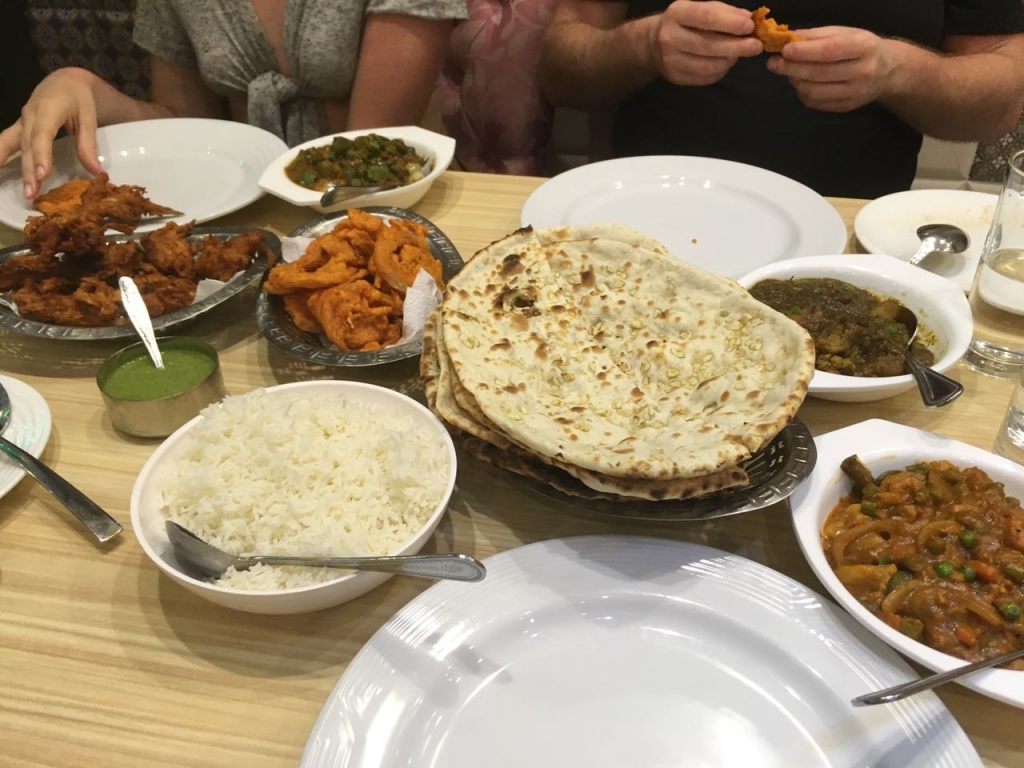 ASMI – curries, naan (without butter), pakora, bajji and some green yoghurt dip (sadly, not vegan and it was only thing left untouched when we’d finished!)

I can’t remember ever eating a curry this good. Perhaps long ago in Hounslow, in one of those places you know are good as the majority of the clientele is Indian. We liked it so much, we ate at ASMI three days straight. Well, what else were we going to do? 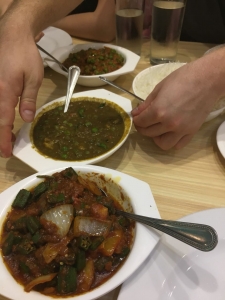 Koh Lan was the main reason for us landing in Pattaya, so how did it measure up? We managed one trip out there in total. Setting our alarms for the crack of dawn, we ignored them and slept in ’til nearly midday, raced down to to the harbour in a Songthaew (pick up truck with roll cage and shell that offer a chaotic hop on/hop off service) and set sail for paradise. 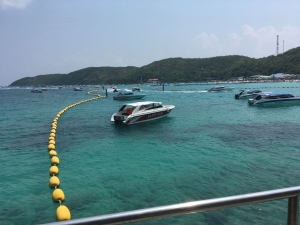 Ko Lan when we arrived, tropical water but a lot of speedboats!

The boat ride only takes 30 or 40 minutes but my first impressions weren’t the paradise it was made out to be. The pier we docked on bisected a bay that was primarily used as a shipping lane for speedboats, which zipped aimlessly around. The roped-off swimming area each side of the concrete jetty was smaller than most standard swimming pools. The beach full of restaurants and Chinese tourists – who didn’t seem to mind that their slice of paradise was so hopelessly compromised or that the idyllic scenery in the pics they took on selfie-sticked smartphones was obscured by man and machine. 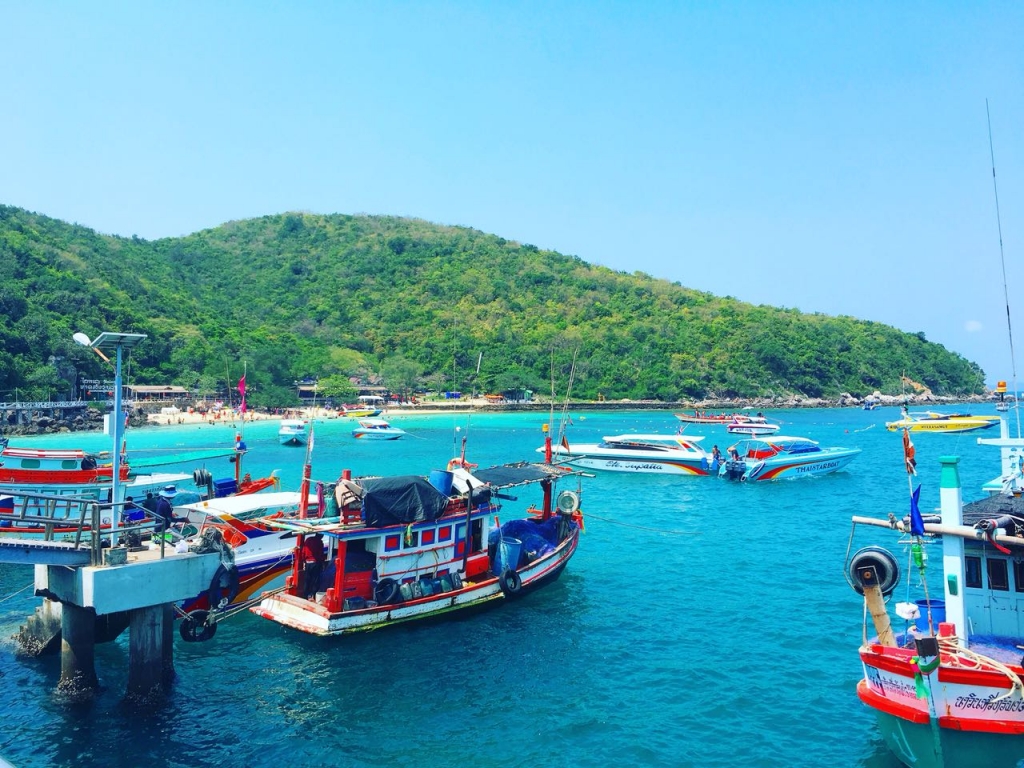 In desperation, like some dazed, shipwrecked unfortunate, I tried to find a way off the beach, even going so far as an attempt to clamber around the rocks on the far side.

When that failed to achieve the great escape we’d hoped for, and we remembered that we weren’t some the 18th century Crusoes, smartphones were duly whipped out, gps powered up, Google maps loaded. We then found a Songthaew and were on Samae beach on the other side of Ko Lan sipping tequila sunrises with a beach to ourselves in all of 20 minutes. 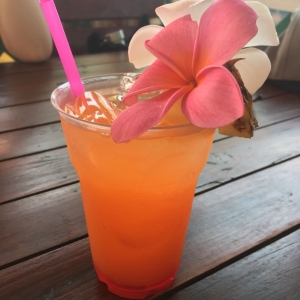 Samae beach was a great improvement. While choppier than the beach we initially landed on, it was a far more relaxed affair. Gone were the line of concrete Soveit barrack block-style restaurants, the speedboats and most of the million or so Chinese tourists. Instead we had a line of wooden huts, a few stray dogs and a beach largely to ourselves. 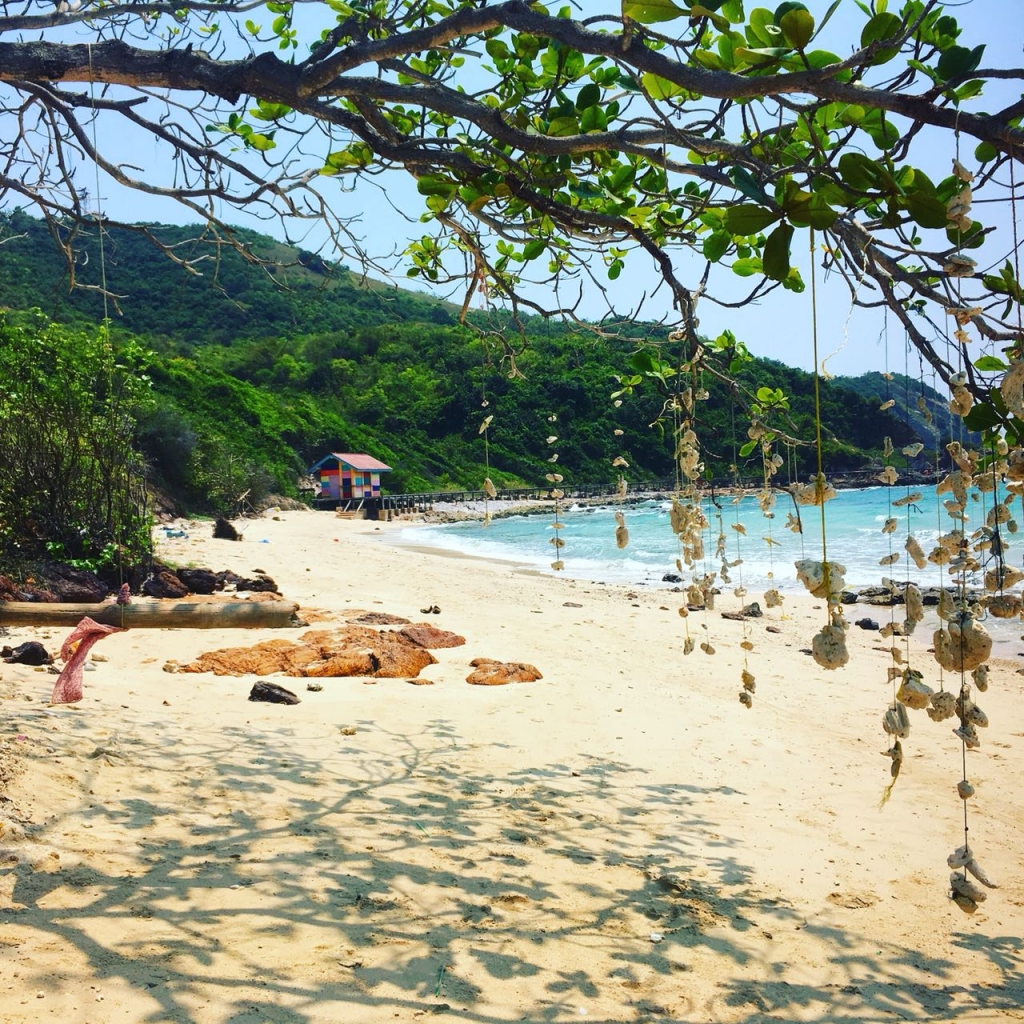 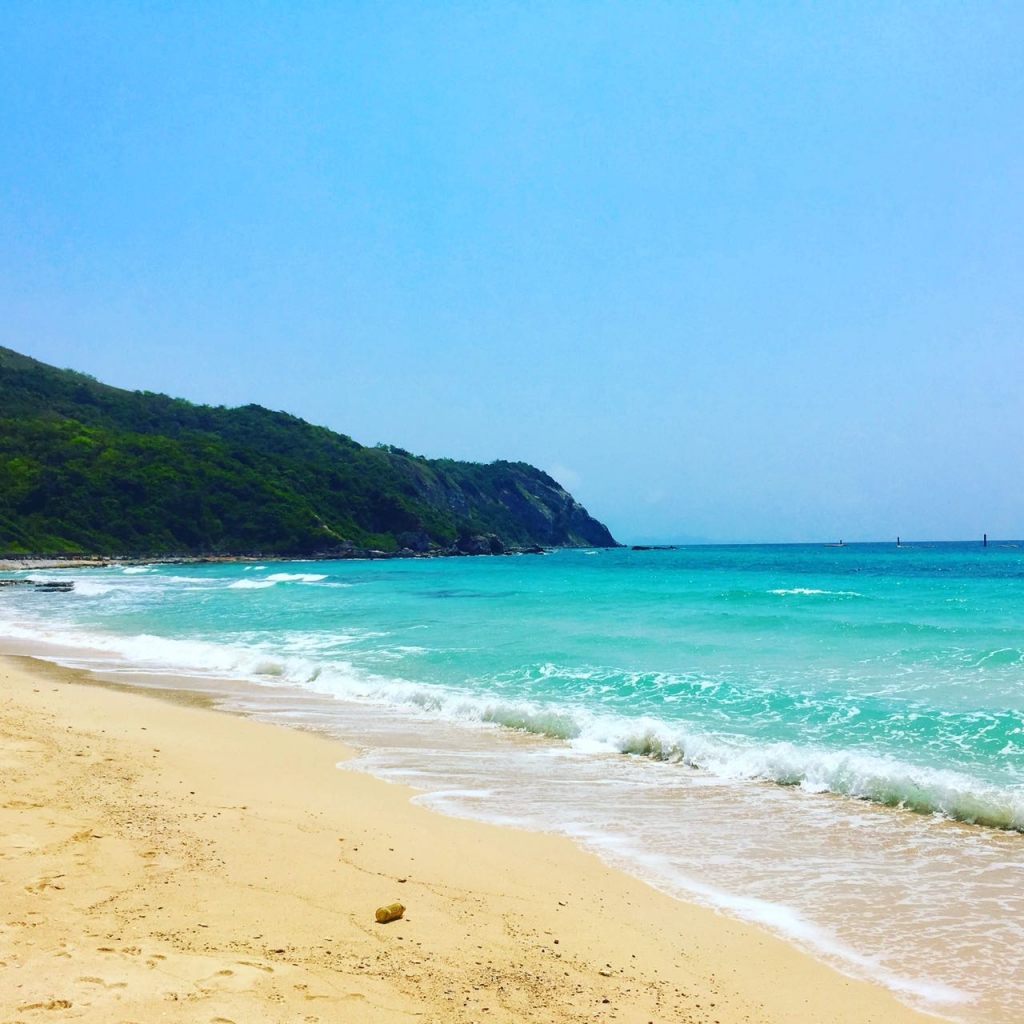 So, did that slice of almost-paradise make up for Pattaya?

Do not go to Pattaya. Ever.