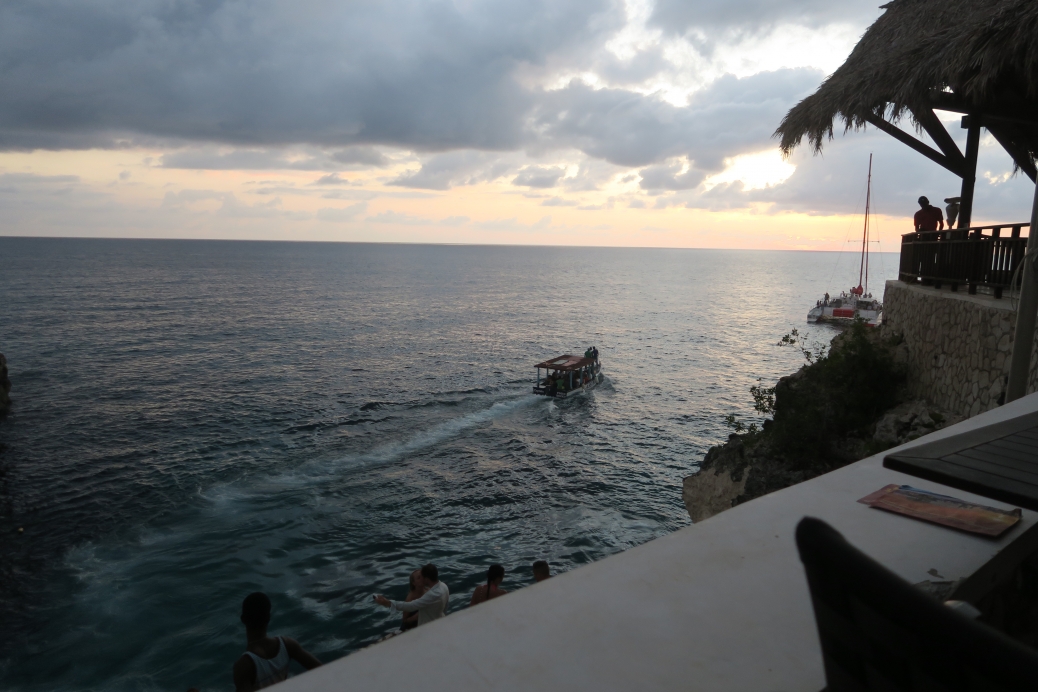 This blog was alluded to be a Montego Bay blog. However, time ran away from us there and we didn’t get to see very much of it at all. We only had two whole days there. One of which we spent at an amazing animal sanctuary, the other was spent with the intention of staying in to catch up with Vegan Travel stuff, but the extremely spotty internet at the place we were staying made this impossible, causing us to more or less waste a whole day. It would seem we are in a very small minority of people who have been to Montego Bay and did not visit the beach. We did, however stay in a lovely guest house with a very enthusiastic puppy and a sweet kitty. We had access to a swimming pool, fruit from the trees, and we had a lovely host, so it wasn’t so bad. 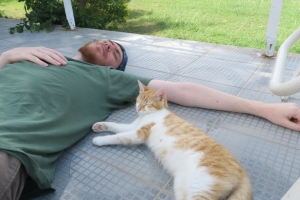 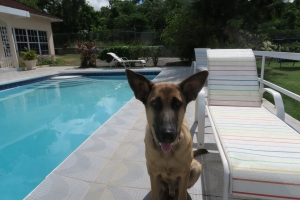 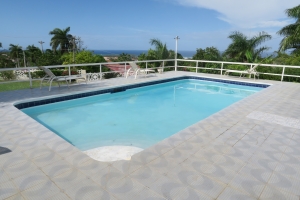 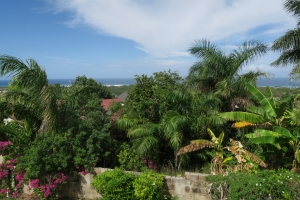 Due to our massive change in plan in Montego Bay, this blog shall now be about Negril. Apologies!

We started the day bright and early. Earlier than expected, when our host, believing we were leaving at an earlier time than we were, knocked on our window saying we were ready to leave soon. There was a power failure the night before, which also shut the water off. So we left, unwashed and thirsty, but ready to face the day. Before we left we encountered yet another snag, when the absence of electricity meant the electric gate for the property was inaccessible and our ride to the bus station would not be able to leave the property. Despite these issues I definitely liked my stay at Togetherness – this is just essential to set the scene. We had a taxi called for us, and had our host tell the driver that we were both vegan and very important people – I don’t know where the latter part came from or if they were connected, but I’m going to take it to mean that we were important because we were vegan. With a brand new sense of entitlement we were off to the Knutsford Express.

This journey was considerably shorter than the last. However, this meant there was no free water and there was no awful on-board Lifetime movie to make fun of. Alas. The scenery, however, was excellent as always. 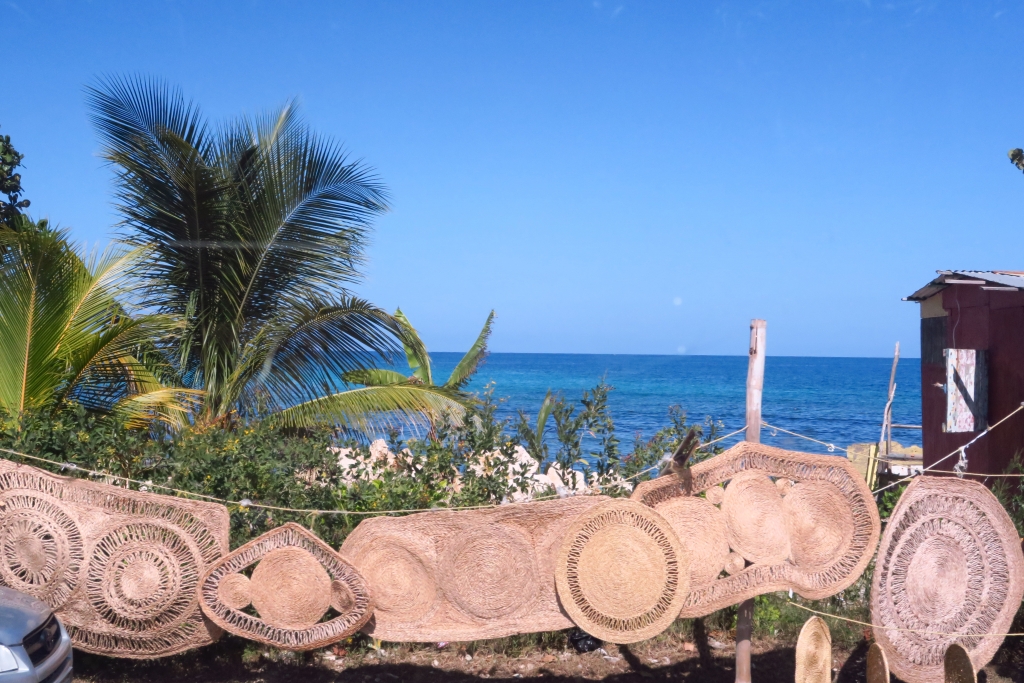 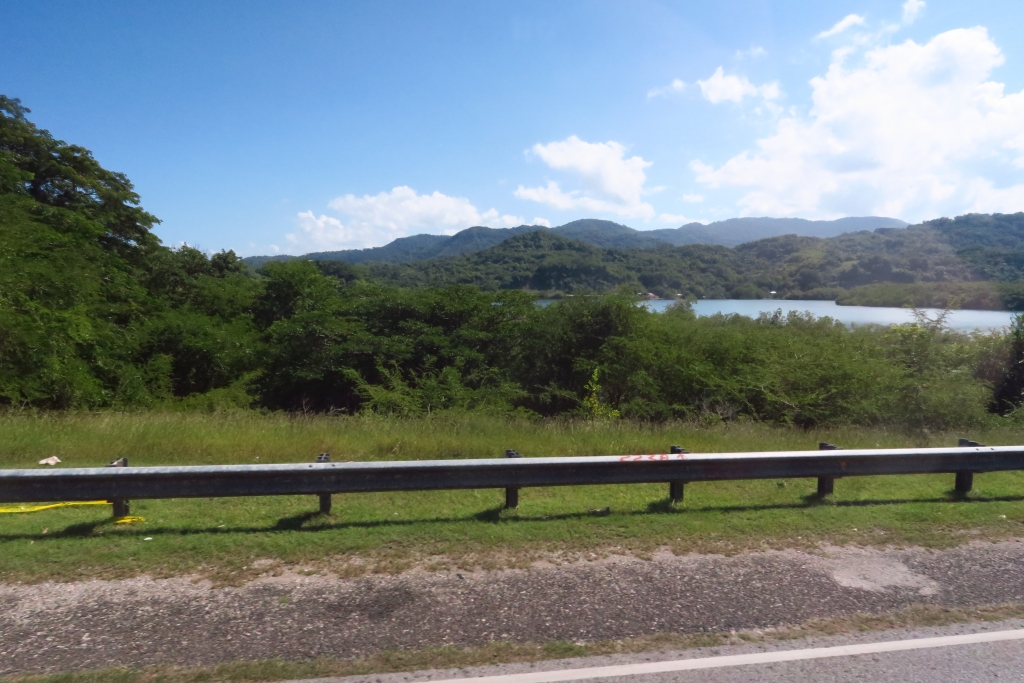 After our short bus ride we pulled into Negril. We met someone who was staying at the same hostel as us, so we shared a cab ride there. We stayed at a hostel called The Judy House, which is certainly the most unique hostel I’ve ever visited. It was tucked away in a small jungle/wood type area. The bedrooms were tiny little cabins, all named after different fruits – we were staying in Guava. There were outdoor baths that you could heat in the sun and relax in. They even offer space in their hammock garden, for travellers who want to sleep under the stars. The staff were incredibly friendly, and we felt like part of the Judy House family for our few days there. 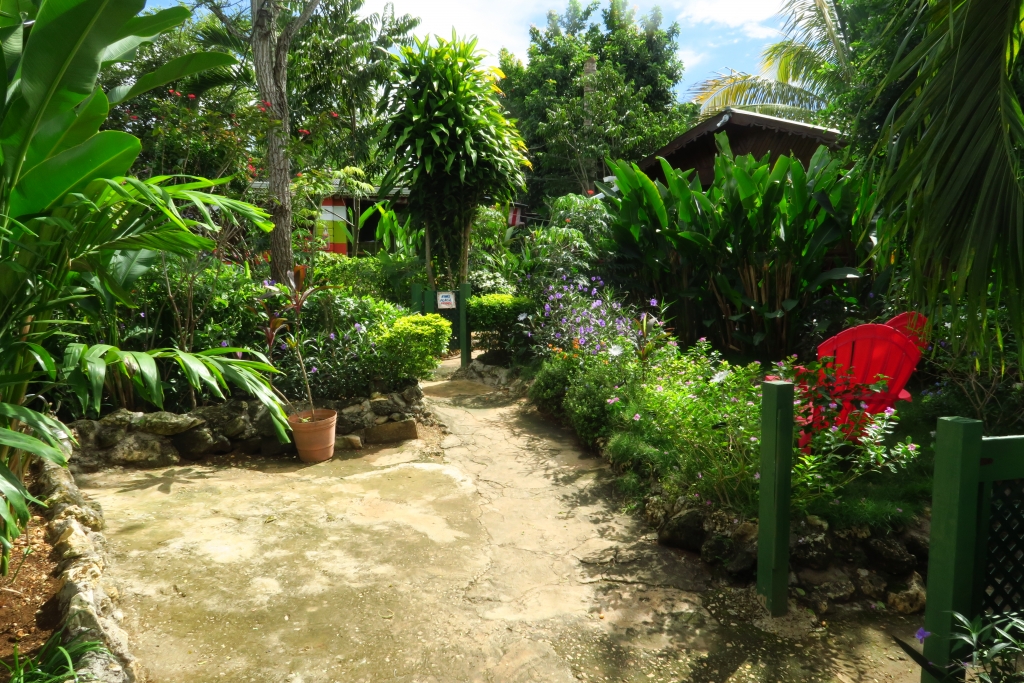 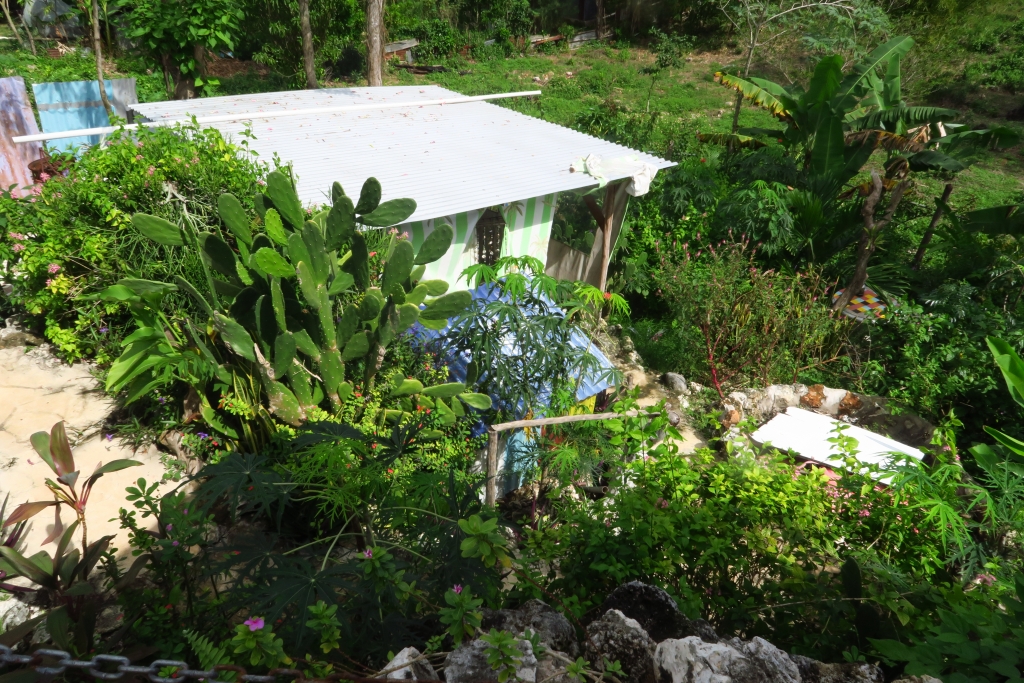 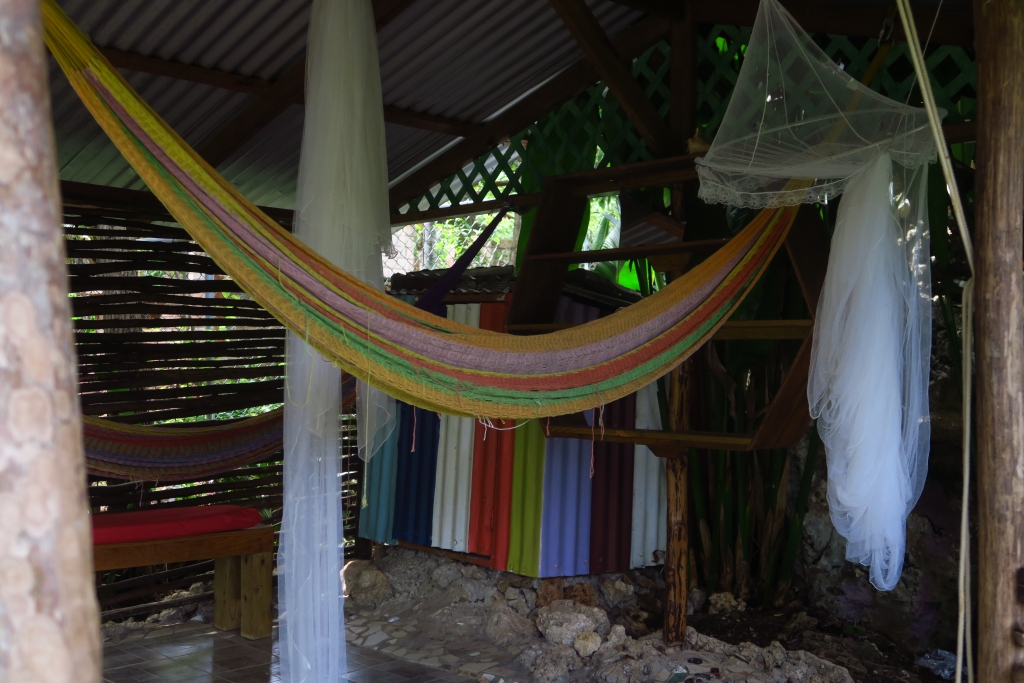 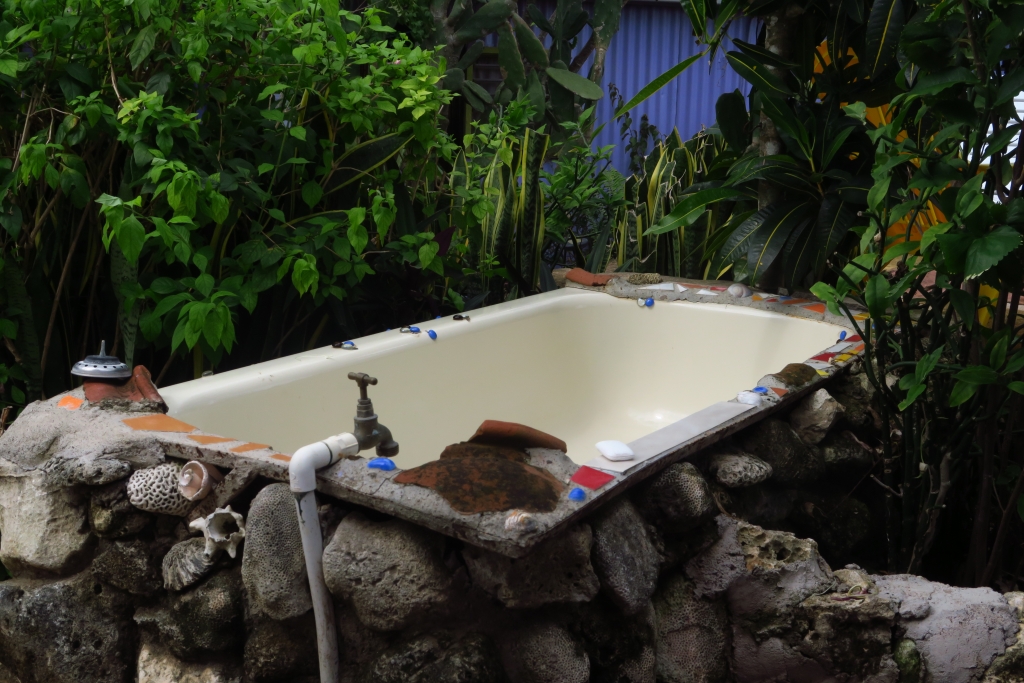 The next day we decided to go check out some beach. We had the option of going to the famous seven-mile beach, or to the small patch at the bottom of the hill from us. We had planned to go to the cliffs later that day, so we opted for the latter. Being from the west of Scotland I’m not exactly spoilt for choice with beaches, so this was something of an experience for me. We ran around on the sand, we went for a swim, we looked at some of the life swimming around us. I wasn’t even driven out of the water when I seen a tentacle reach up a few feet from me. I must have been having fun. 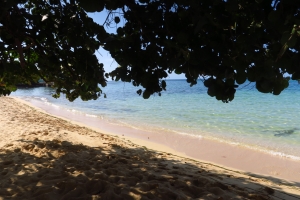 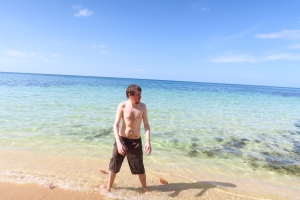 After a few hours of this, we went back to the hostel with enough time to lie down for an hour, then make our way out to the cliffs. Someone who arrived on the same night at us was also thinking of going there, so we all went together. We took a cab to Rick’s Cafe, which is the most renowned spot for sunset cliff-diving. Rick’s was incredibly touristy. I can’t recall what gives it away first. It wasn’t the incredibly tacky and expensive food menu, consisting of items such as ‘Rasta Pasta’, or the live band performing sets of Bob Marley covers. It’s just apparent from the moment you arrive. Not to say there was no fun at all to be had here. It was kind of fun watching the people dive from the cliff, and it’s always fun to see when people are so obviously happy. Particularly, however, the sunset over the sea is beautiful. 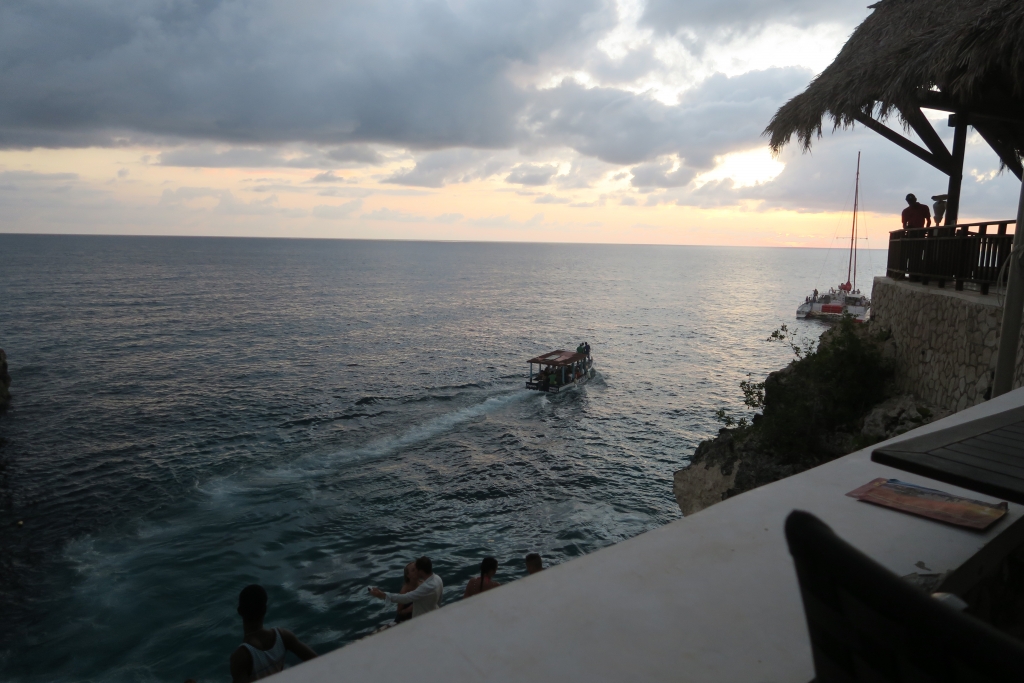 We knew we weren’t going to be eating in Rick’s. We had heard of a place somewhat nearby called Just Natural. We ventured up, taking a bit longer than anticipated. It was completely dark by time we arrived, and I feel it made the place all the more welcoming. This is an incredibly curious and lovely restaurant. On first approach, it would appear that the place is just a shed with a kitchen in the back. Once we ordered our food, the people said we could sit here or go out back. We decided to opt for the latter, and what we found was a vast world of exploration! Behind the shop was a huge jungle-like area with little tables hidden away among the trees. We walked to the very end before deciding on where we would sit, and the place just went on and on! We eventually found a seat and our soup came. We hadn’t ordered soup. It turns out you get a soup and dessert with the food you order. This was another pleasant surprise. We ate three courses with a fruit juice for a ridiculously affordable price, spoke to the lovely staff for a while, and went home with satisfied stomachs. 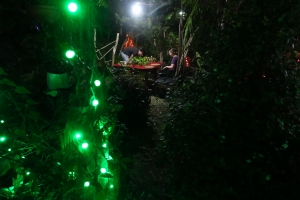 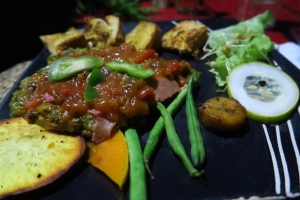 The following day was not as eventful. We experienced torrential downpour, on and off for most of the day. Our plan was to visit seven-mile beach, and we were going to see it through. In the interest of protecting our valuables from the heavy rain, we emptied our pockets, and went to the beach with nothing at all. This unfortunately meant leaving the camera at home. I don’t feel we missed much here. The beach was as touristy as Rick’s and then some. It was incredibly difficult to go a few minutes without being approached with an offer of original art, fruit, and a myriad of other goods. I’m generally extremely sociable, but I would definitely recommend sticking to the smaller, less busy beaches in Negril.

That was all we managed to do on our last day. Besides socialise back at the hostel and decide to keep in contact with some of the people we met. This was more-or-less our last day of Jamaica. We have one day made up almost entirely of bus travel, and then we’re gone the following morning. I’m going to miss being here, but I’m probably going to say that about everywhere. I feel I learnt more here than anywhere else on the trip thus far. Let’s see if you can top this, Peru!