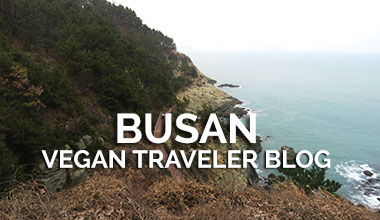 Contrary to what we’d heard over and over about how difficult it would be to be vegan in Japan, I had read that it would be incredibly easy in South Korea. Armed with this knowledge, I was incredibly excited for our arrival here. I didn’t know very much about South Korea. Besides reading a few cultural thing in order to be respectful and avoid social faux pas, we had no idea what to expect, excited to explore it to find out. Our week in Seoul taught us that it can get incredibly cold here, and that is does not seem to be as easy for vegans as we were lead to believe, or, at least not that I have found. There is a generous number of vegan restaurants and cafes, but everything is a train or two away. The majority of our meals in Seoul consisted of instant noodles and microwave rice, because supermarkets prove difficult to find. We found ourselves questioning whether this was exclusive to Seoul, or if this was a thing elsewhere in South Korea. The case was open! We donned our detective hats and headed on the bus going all the way to the other side of the country. We were going to find out how easy it was being vegan in Busan. 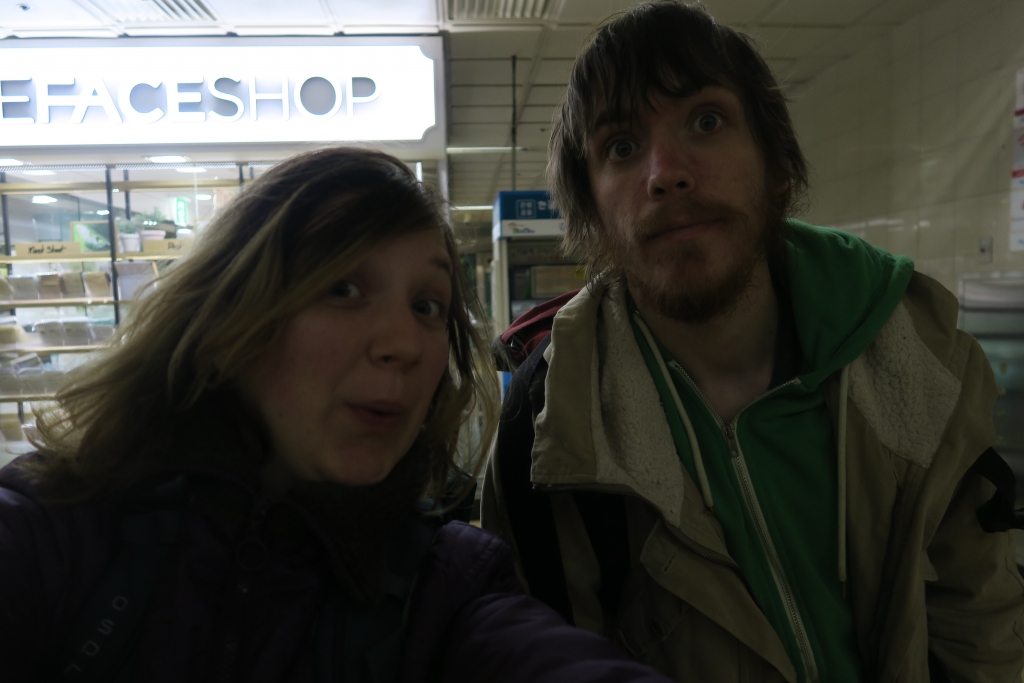 After a five hour bus trip and a whole pack of biscuits, we had arrived. Hungry and exhausted. Getting off to a great start we managed to get lost just minutes after we arrived. This at least lead us to our first exciting Busan discovery: there was a grocery store nearby! Seeing vegetables on the shelves was the most exciting thing we’d seen all day, and we stocked up on some much needed nutrition along with some directions. We eventually found our way there, and immediately got to cooking. It’s amazing how much the vegetables improved our energy. If you find yourself in Korea, you should definitely find out where a grocery store is. Convenience stores here just don’t cut it.

The host of our hostel gave us a map of the city with some personal recommendations highlighted. It all looked incredibly interesting, but one thing in particular caught my eye. There was a 3.5 mile coastal trek, resulting in a skywalk. We planned to find some food and do this. Researching where we could go, it turned out there was a lot of places to choose from in Busan. We decided to go to to Dajeon, a teahouse and all vegan restaurant, serving traditional Korean food. We hadn’t had any traditional Korean food, so this seemed like the obvious choice. We set off, and, with a bit of difficulty, found the place. A common thing in Korean food is to have cooked rice along with a large number of side dishes, or ‘banchan’. This seemed like it would be a pretty authentic Korean food experience, and probably the only one like this we’d have, so we both opted for that, along with a side of dumplings. We sat around for a while in the warmth of the cosy tearoom, anticipating what this would be like. We were unsure how many side plates there would be. What was going to be included? Would it be enough? Well, our questions began to be answered when the person brought over a trolly full of dishes. I could not stop smiling as dish after dish was placed down in front of us, culminating in seventeen individual plates resting on our table. All of them unknown. All of them exciting. 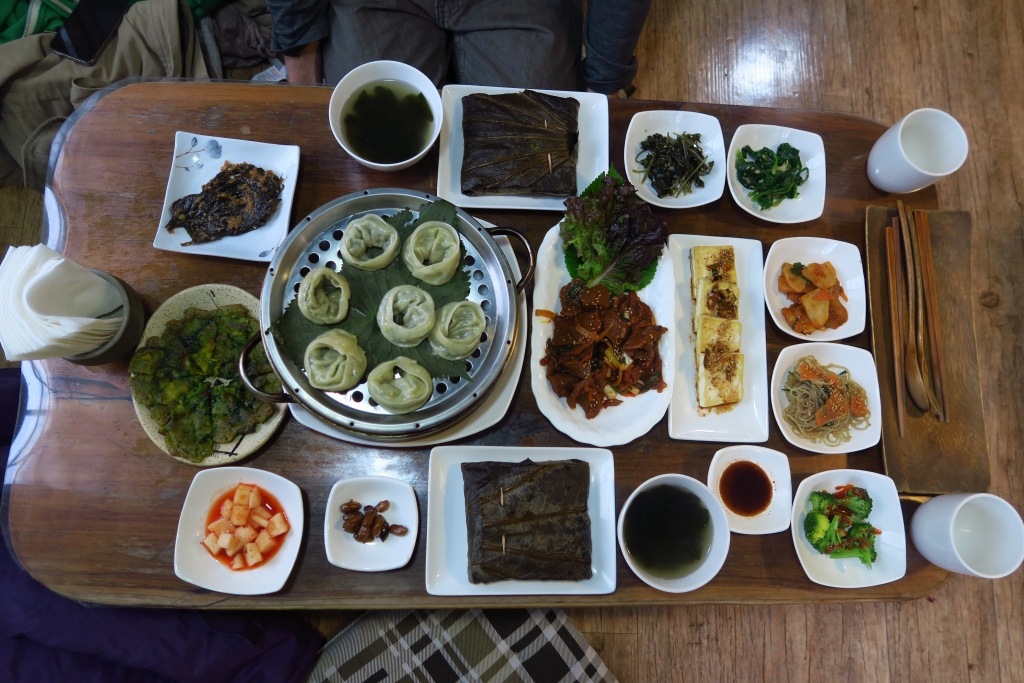 We did not know where to begin here. Besides the dumplings and the soup, absolutely nothing here was at all familiar. We ate our soup first, and then just started to move round at random, picking something up and trying a bit. This was an incredible experience! Everything here was built from a completely different flavour palette from anything I’m used to. I certainly didn’t fall in love with everything here. Some of it I tried no more than two mouthfuls of. Some of which I am sad I’ll likely never have again. In the end every single plate was an interesting experience.

The dumplings, the bulgogi, and the tofu (all three in the centre) were the standout dishes for me. The bulgogi really was unlike anything I’d had before. It is very heavily marinaded, packing it with a seriously intense burst of flavour. The tofu and dumplings were slightly more familiar, but particularly exceptional. The dumplings come with a really tasty dipping sauce, adding a much needed spicy kick, and the tofu is comparatively simple in taste, allowing the flavour of the sesame to do wonders. I don’t mean to harp on about it, but talking about it made me hungry. 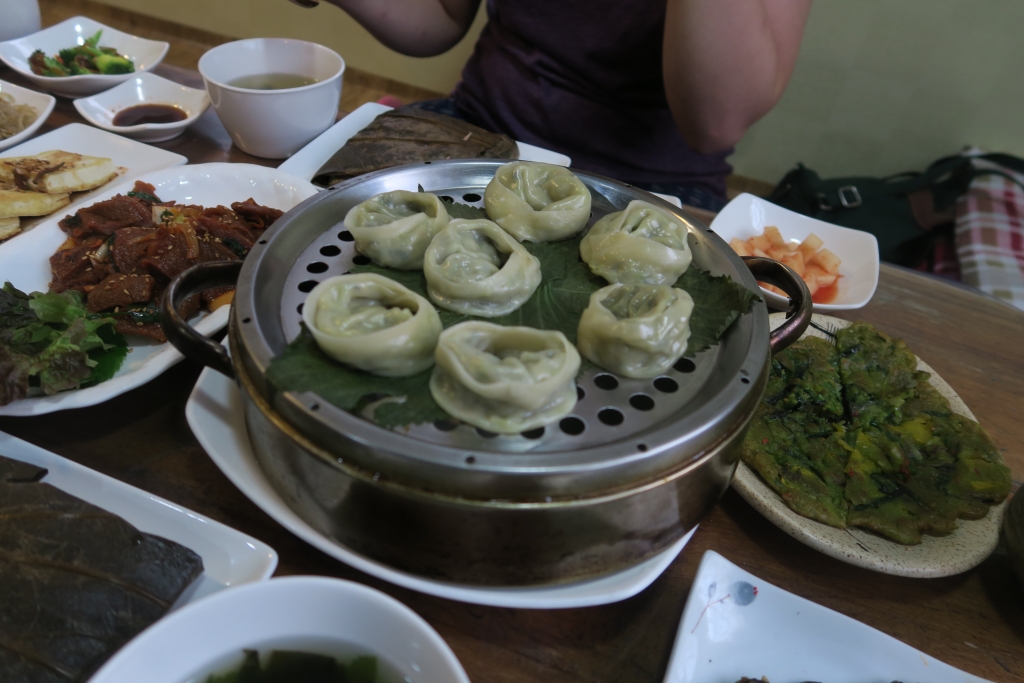 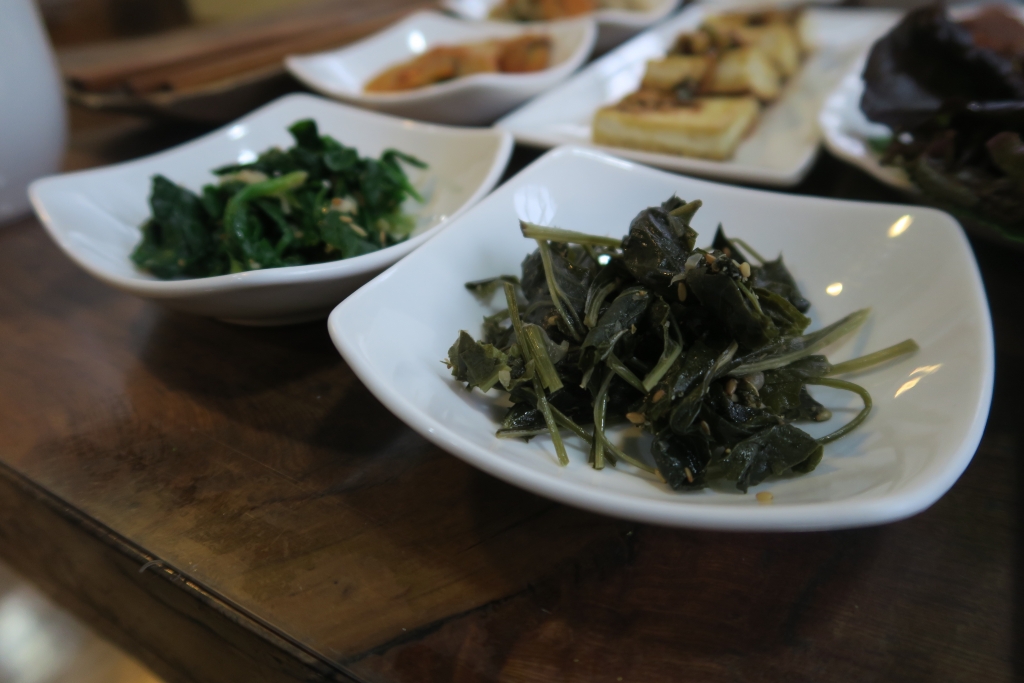 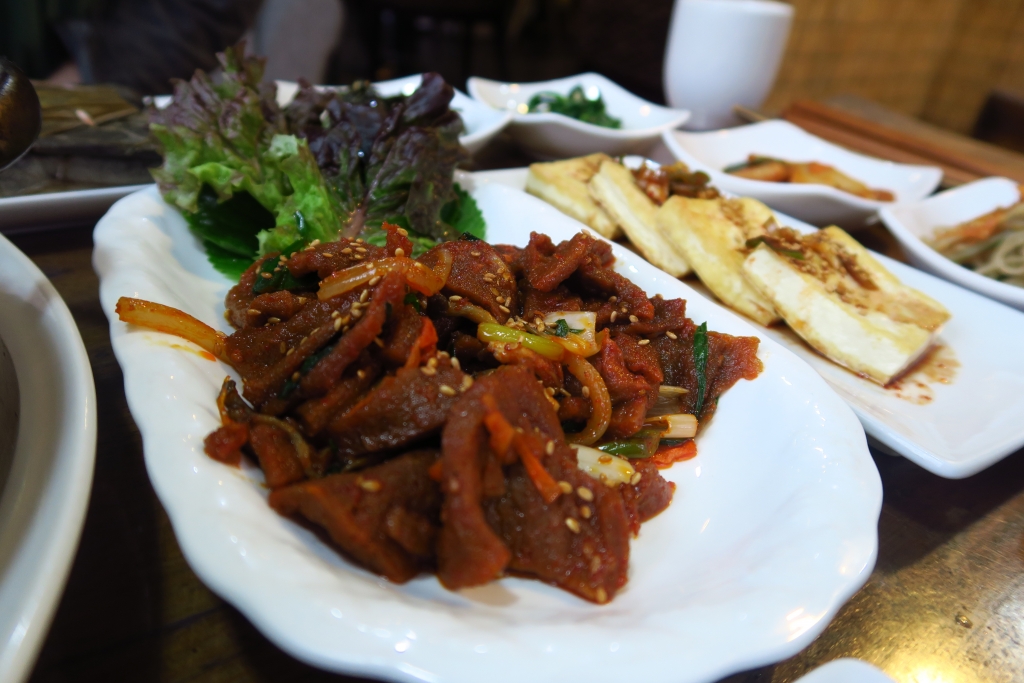 As you can imagine, this was not a simple ‘eat and move’ affair. This was an event. A ceremony best dragged out for as much time as is needed (it turns out that is roughly the same time it takes for the 90’s power ballads mix to completely loop twice over). By the time we got out of here it was getting close to sunset. We would have to postpone our coastal walk until the following day.

We set off the following day for the walk. Like most things, we got off to a rocky start – something of a pattern has began to form. We waited a while for the bus we should be taking, only to have it drive past us. Putting us a good thirty minutes behind. The next bus came, and we managed to get on. We got ten minutes down the road and the driver told us it was our stop. It wasn’t. We were wandering around looking like confused, useless westerners until someone came up to help us. We were a wee bit out of the way from where we were supposed to be, and they pointed in our general direction. This, while useful, only took us so far. Fortunately the useless western look came in useful again, and in just two additional instances of it we were there! The walk goes along the edges of the coast and around the cliffs along the south of the country, seasoned with several paths leading off into the woods and caves to explore. This was probably the most beautiful thing we’ve done here. The walk took a couple of hours going at a somewhat leisurely pace. The scenery along here is beautiful, particularly as we were approaching the end and the sun was beginning to go down. 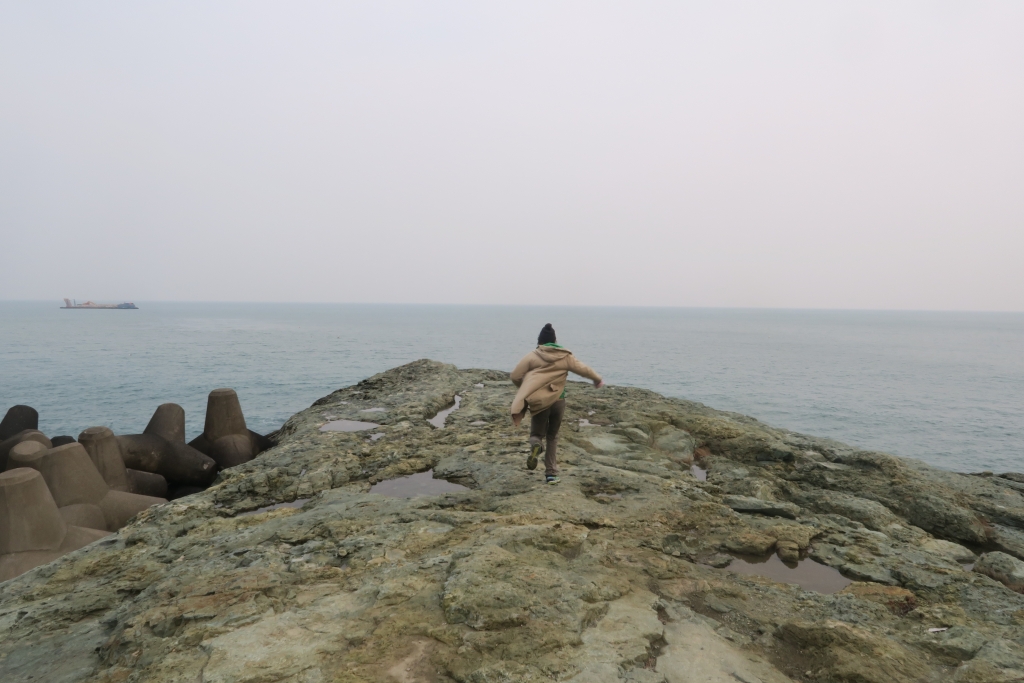 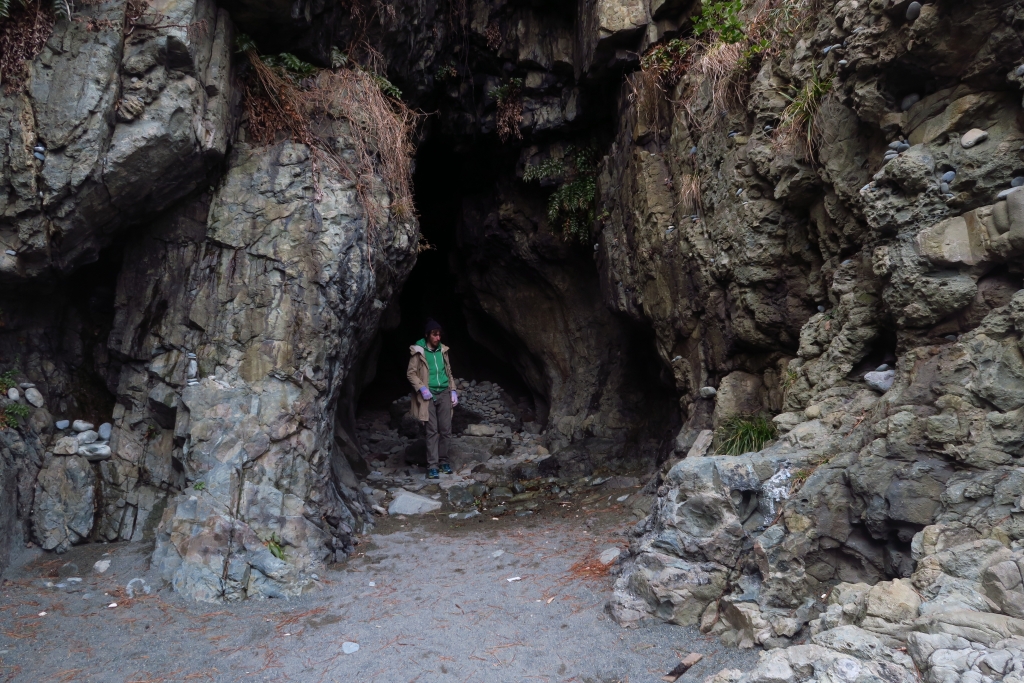 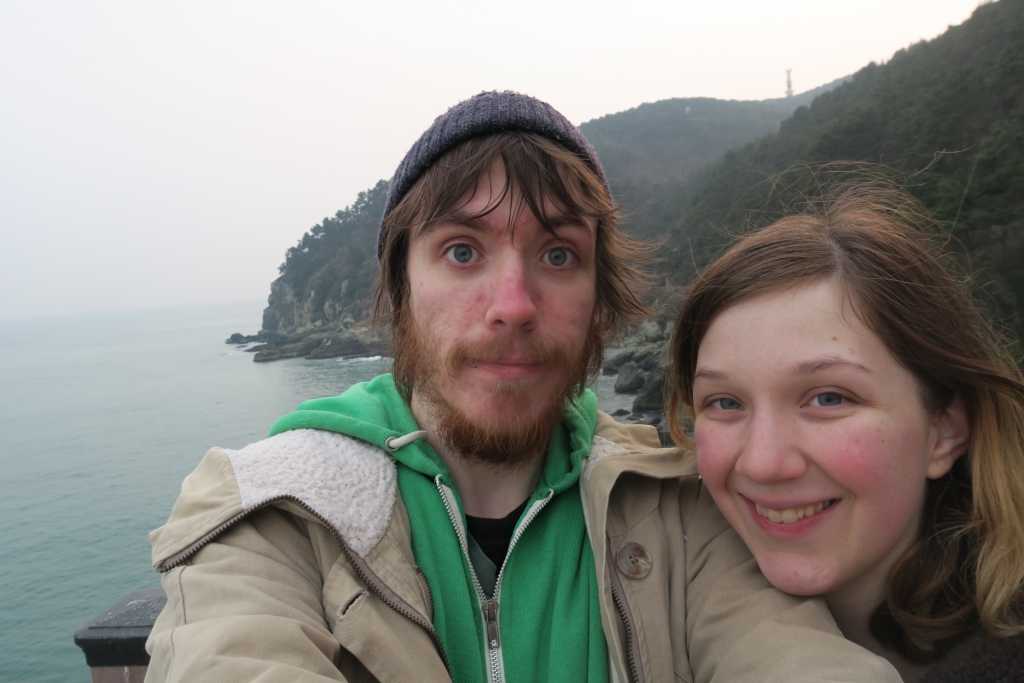 This is definitely not a walk for everyone. I am fortunate that I am able bodied, and have no issue with lengthy treks. There are, however, a lot of stairs and inclines here, making it a bit unforgiving for anyone who has any sort of difficulty with mobility. If you are able to you should absolutely check this walk out if you are in Busan.

Our time in Busan quickly made us forget about the difficulties in being vegan in Seoul. This has probably been my favourite stop in South Korea, and these consecutive days are a personal highlight of the trip as a whole.