About Me – Vegan in Costa Rica 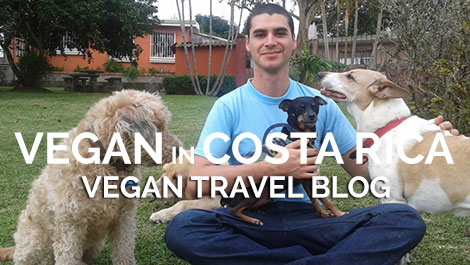 Great! This is my first post for VeganTravel, so if you are going to read anything that I could write in the future, the best thing is that you can know a little bit about me.

I´m not used to talk about myself, but that’s what blogs are made of soooo, here we go.

Raised and born in San José, Costa Rica, the land of Pura Vida, known for the best coffee in the World (if there is someone from Colombia reading this, we can discuss later), beautiful beaches, the gallo pinto and a lot of tropical/surf/salsa cliché things. Not everything is rainbows and unicorns in Costa Rica, but this is not a socio political blog, so move on. And just in case you still have the doubt, no I´m not from Puerto Rico and no, Costa Rica is not an island. 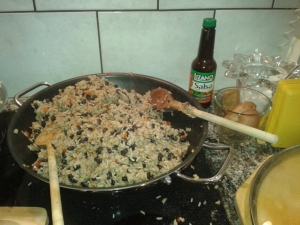 Ok, so I grew up as a normal kid in Costa Rica, playing soccer or “mejenga”, going to the beach with my parents, drinking coffee since I was 6 years old, not going to the army and other pretty normal things around here, and yeah, also saying: – great, vegetarianism it´s cool but not for me, I love animals, but I also love meat, however, once in a animal welfare activity I saw this guy with a hand written message on his shirt: “Amas a unos, comes a otros” (love one, eat another), I said that I loved animals right? 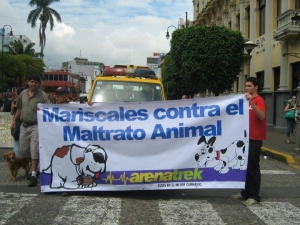 So from that moment I realized that I wasn’t being consequent and I took the decision of becoming vegetarian, years later I opened my eyes (again) and I became vegan (despite I don´t like labels, but it´s OK). 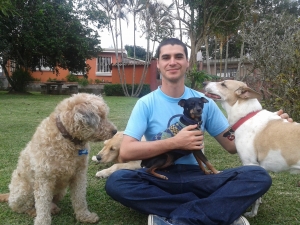 Random old picture with Weylon Simon (my girlfriend´s dog), Nacho (who passed away two weeks ago) and Susie my dog 🙂

Being vegan in Costa Rica, sometimes it´s easy but sometimes it really doesn’t, for example, we have farmers market every Saturday or Sunday, it´s like a vegan heaven, however, if you go to eat outside here, everything has meat or dairy, it´s like 50/50, later I will tell you more about veganism in Costa Rica. I´m part of a vegetarian and vegan collective calls Viva Veg, we promote the veg life style in Costa Rica (Now I notice that I do have a lot to talk about, so I´ll talk about this later).

Also I love music, so I play the drums in three bands in Costa Rica:

You can check it and let me know if you like it.

Well, that was a little bit information about me, I promise that in my next post you will find more info about traveling and veganism combined or whatever, and as spoiler I let this picture that I took in Toulouse a couple months ago. 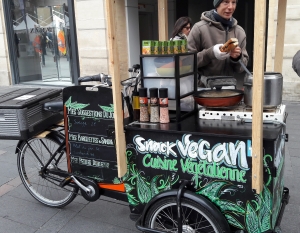