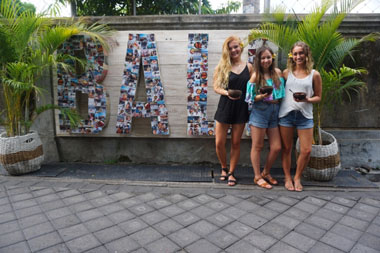 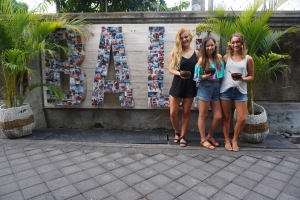 Shae, Ally, and Marissa at Nalu Bowls in Seminyak

We had the smallest idea of what Bali was like before we arrived. We had no idea how big this island was, what each area was good for, how long we should spend in each place or if it was even necessary to move around.

Our trip to Bali started in Canggu, then moved to Ubud, Seminyak, and Uluwatu. In two weeks, we moved around to the four areas and had very different experiences in each one so we thought we’d give you a run through of what we thought the different areas were good for so you can best decide where you want to spend your time, because they’re all so different and it’s hard to choose! 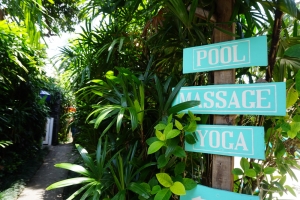 Our jungle heaven at The Chillhouse.

On our flight from Sydney to Melbourne with TigerAir, there was a magazine with a section about vegan options in Bali where it had a 4-page spread about the up-and-coming hip vegan town; Canggu! There was a list of restaurants with vegan options, and some places that were entirely vegan just within this little part of Bali! So that is when we started planning where we wanted to spend our time and we decided to spend a majority of our time in Canggu. 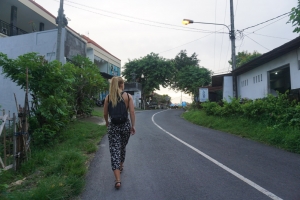 Beautiful walks from place to place, or scootering around!

Our accommodation was at The Chillhouse, about 1.5 miles from the beach which is a straight and easy scooter ride, or a nice walk along the main road flooded with vegan-friendly restaurants. When I say flooded, I mean that almost every other restaurant is either raw, vegan, vegetarian, or has half their menu filled with vegan dishes. It is almost overwhelming with how many options there are for places to eat, especially if you don’t have enough time in the area or meals in a day! 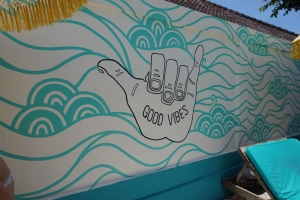 Even The Chillhouse had a breakfast buffet of fresh tropical fruits, toast with homemade peanut butter and an assortment of jams, vegan cinnamon banana pancakes, smoothie bowls, and so much more. Then after you come back from a day of eating or surfing or any of their other excursions, a dinner is waiting that is easily veganize-able such as a taco bar. See what I mean? Too many options!

If you’re looking for surfing, word on the street is that this is a good place to find surfing beaches! Also, the right place to be surrounded by Australians. Canggu is saturated with Aussies, let me forewarn you about that. We watched some people taking lessons at Batu Bolong beach and the waves were being nice to them! Apparently Echo Beach has incredible surf, but not for beginners. 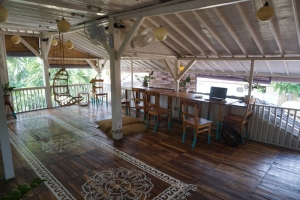 Relaxing upstairs area at The Chillhouse

The entire island is obviously full of tourists, but Canggu didn’t have an overwhelming amount of tourists, it felt more like a bunch of expats or people who often make trips to Bali. Because of how westernized this area is, the restaurants know that they can up the price a little bit because the people visiting are from countries who are willing to fork out a little extra for a nicer atmosphere and meal so don’t come into it expecting crazy cheap prices for everything and you won’t be disappointed! 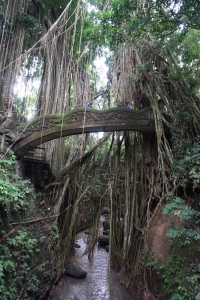 In the Monkey Forest in Ubud

This is what we hippy yogi vegans like to call heaven. If you want to find the most Wanderlust-y, spiritual, hardcore, stereotypical vegans, this is where you strike gold. There are plenty of vegan-friendly restaurants, but there is also a big yoga culture here. Ubud seems to be the place where people go to get a kind of retreat experience, where they can visit the Yoga Barn for a day packed with classes from gong meditation to free-dancing (and boy do people get into it), as well as your traditional yoga classes of many different levels.

Ubud is away from beaches, so you are more likely going to spend time working on opening your chakra spirit center things than perfecting your frothin’/ barrel-ridin’ shaka laka surf skills (take it from me, I’m basically a professional at both if you can’t tell). But really, Ubud is a completely different atmosphere and environment than the other three areas, so take a trip there, fully immerse yourself in the jungle and the journey, and have a blast.

If you avoid Alchemy (which you better not because this is the best thing about Ubud), your wallet will thank you. However, the prices in Ubud are slightly cheaper if not about equal to the prices in Canggu if you’re looking to save a little money when you eat out. There will be more options of local restaurants that don’t specialize in westernized and raw-vegan selections where you will really get a bang for your buck! Especially if you spend time walking around the street market, practice your bartering and get some awesome souvenirs here! 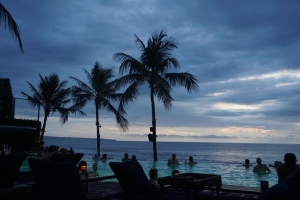 And here is where I suggest going if you love visiting foreign countries just to shop at expensive stores you can find in any other country around the world while being swallowed into a flood of people who have no idea how to maneuver themselves or their families in foreign territory. AKA, welcome to the tourist town of Bali! This is where a majority of the luxury hotels and resorts are, where the nightlife is, and where the beginner surfers go to take lessons. These are all ingredients for a lot of people, but this could be a good thing for some people if you’re really looking to meet a lot of different people. There is a mix of demographics, so hop over to Potato Head to watch the sunset with a mix of people in their infinity pool on the beach! It is popular for a reason, this is a beach club, yes, but it’s so much more than that!

The prices of things here are by far the most expensive. According to Australians, it is still much cheaper than their normal prices, but I spent almost $7 on a small holiday Starbucks drink with soy milk… to me, that is a little insane. There was a little street market here at the end of the main road in Seminyak Square, and they will charge you way more than the vendors at the Ubud market and are not as keen to barter with you, they’ll just shoo you off.

There are one or two vegan/veg friendly spots here, but restaurants don’t seem to be this area’s main focus. Come here for the shopping and Canggu for restaurants! They’re in pretty close proximity and a pretty cheap Uber ride between them (Yes! They have Uber in Bali and it’s CHEAP!) 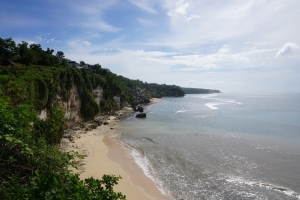 These four areas really couldn’t get any more different from each other. Uluwatu wouldn’t have had very much to offer us and we would have been extremely bored if we didn’t just happen to have a great group of people to hang out with and keep us entertained!

Uluwatu is where the seasoned surfers go because the waves are extra… surfy? So guess where we tried to go surfing for the first time! The beginner areas like Seminyak? Of course not, how dare you doubt our abilities. We tried at Dreamland Beach with all of the professionals because we are professionals. It was honestly a blast trying to surf at this beach, I even got to see my life flash before my eyes while stuck under water for a minimum of 20 seconds! Oh yeah, watch out for the rip current too, that’ll getcha. 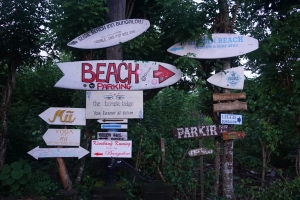 We got away with not renting scooters up until this point. It’s near impossible to get around Uluwatu without one, Uber doesn’t hang out in this area, and cabs don’t exist, there are just local drivers who are willing to drive you somewhere if they see you desperate on the side of the road. It’s a totally safe area to ride around because it is the most remote of the areas we stayed in. There are a few restaurants here and there, but there really isn’t much going on if you get too far away from Padang-Padang. You won’t even be able to find an ATM anywhere in this area except for the two on the main street in Padang-Padang!

Things are priced about the same here as Ubud because there are a lot of little family restaurants and the occasional vegan-friendly place with jacked up prices. Get your surf and jungle vibes here, and if that is all you’re looking for then feel free to set yourself up here. But if that’s not what you’re looking for, be careful to not strand yourself in this area for too long!

So with all of that information being said, I hope you can explore these areas and figure out how you want to spread your time out between them! No matter what you choose, you won’t be disappointed. Bali has so much to offer for a little island, and to say it is in my top three favorite locations on this trip really says a lot. 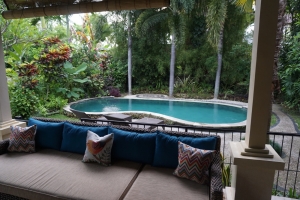 One of our villas pools, they’re incredible.

Also, accommodation is inexpensive and it is sometimes absolutely insane where you can stay for such a great price on Airbnb. In Ubud we stayed in a big house with a huge pool, 24-hour security guard, trampoline and big back yard, cleaning every day, a staff that prepared us a complimentary vegan breakfast and coffee every morning as soon as we woke up, all for $102/day split between three of us. And then again with the same situation in Seminyak for $82/night. We were also there in a pretty high season and booked about two days before arriving, so I’m sure even better options could be found if you didn’t procrastinate like us!

Now I’ve given you every reason to go to Bali, so I can’t wait to hear all of your stories and see pictures of this incredible photogenic island! Enjoy!