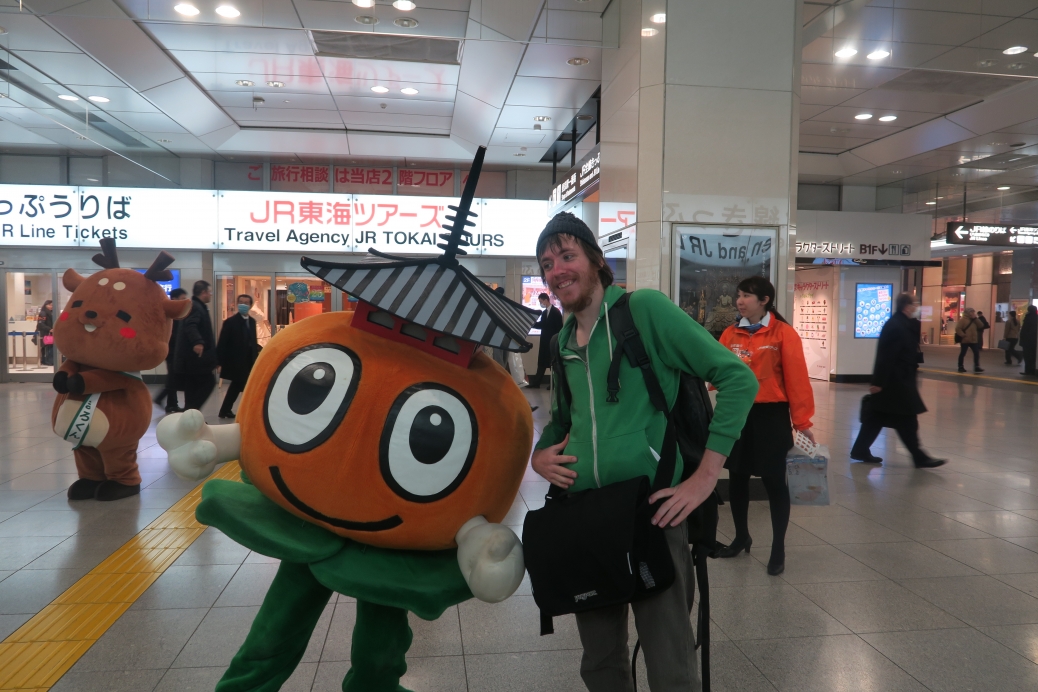 I don’t know why our time in New Zealand felt like it lasted forever, but it did. I don’t mean that in a negative way whatsoever. No, the three weeks we spent there were among the best of our trip thus far. The time didn’t drag, it just crawled comfortably, taking time to bask in the sun. It’s just hard to believe that it was only three weeks. At the time of writing, we have been in Japan for a week, and it feels like we got here yesterday. I love it here, and I can’t believe our time is already almost over.

We were, understandably, a bit nervous about Japan: everywhere we looked and everyone we spoke to would inform us that it is near-impossible to maintain a vegan lifestyle there. This was something we were told about Peru, and it proved to be complete dribble. Yet somehow with Japan it felt more real. I don’t know whether it was because we could speak enough Spanish to get through a conversation explaining that to someone, or if it was because of the difference in volume in our sources for this information. Probably both. Either way, we were nervous. And, much like in Peru, it was all for naught: it really isn’t very difficult being vegan in Japan at all. Sure, it’s slightly more difficult than New Zealand, but following a few tips, it’s really not by much.

Grocery Stores: There are grocery stores everywhere in Japan. The three big names are Lawson, Family Mart, and 7/11. 7/11 is more ubiquitous in Japan than it is in the US. Between the three of these and more, you are never more than a ten minute walk from the nearest convenience store, and they’re all holding some secret vegan goodies! 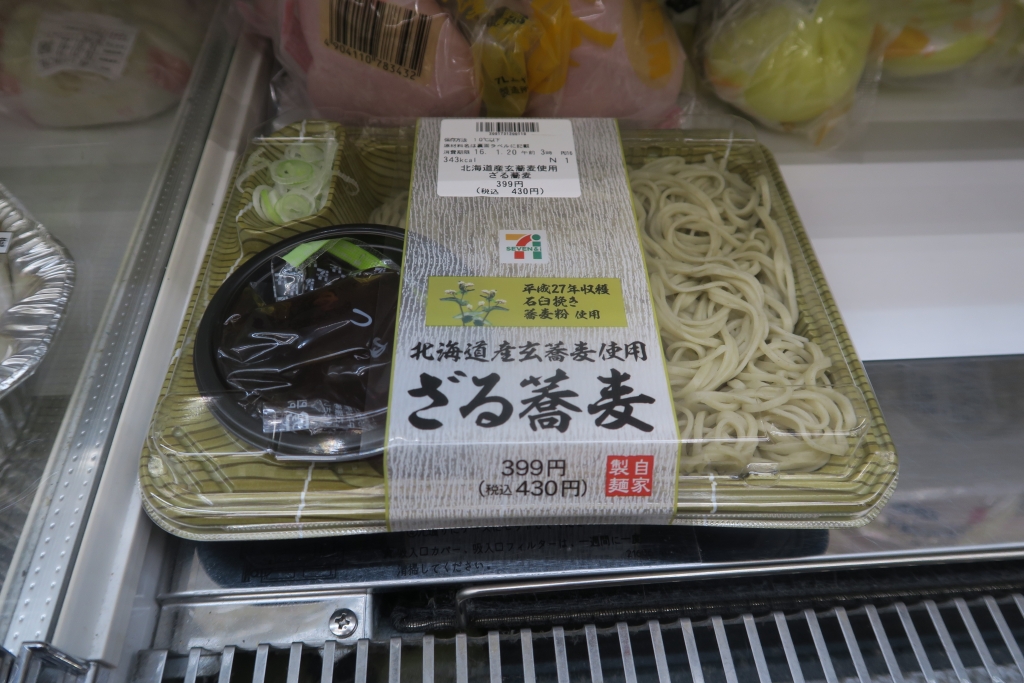 These packs of soba noodles are usually vegan. You just have to switch out the sauce for soy sauce and you’re good to go. We’ve found it to be a worthwhile investment to buy a sizeable bottle of soy sauce to last your whole trip. 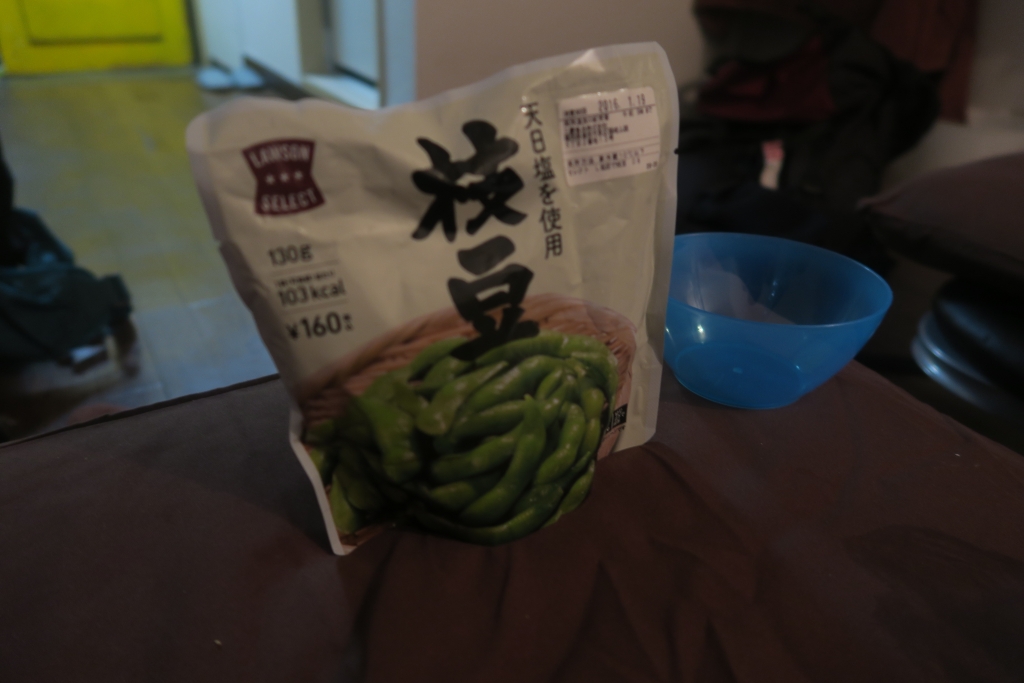 Your new best friend in Japan. These are sold at pretty much every convenience store and are perfect for snacking on the go, or accompanying your dinner. We’ve eaten so much edamame here, and I’m yet to be sick of them. 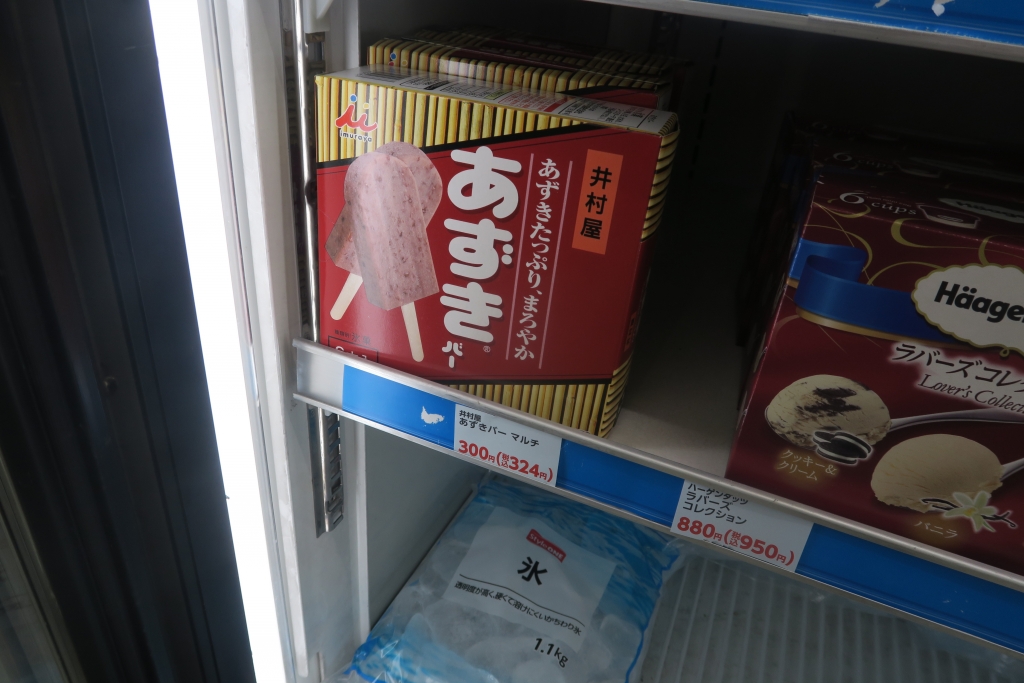 This popsicle on the left is made from red beans. I personally did not enjoy this, but they seem to be popular here, and they’re sold in many convenience stores. They’re probably worth trying at least once, and if you like them you’ll have a reliable solution to your sweet cravings. 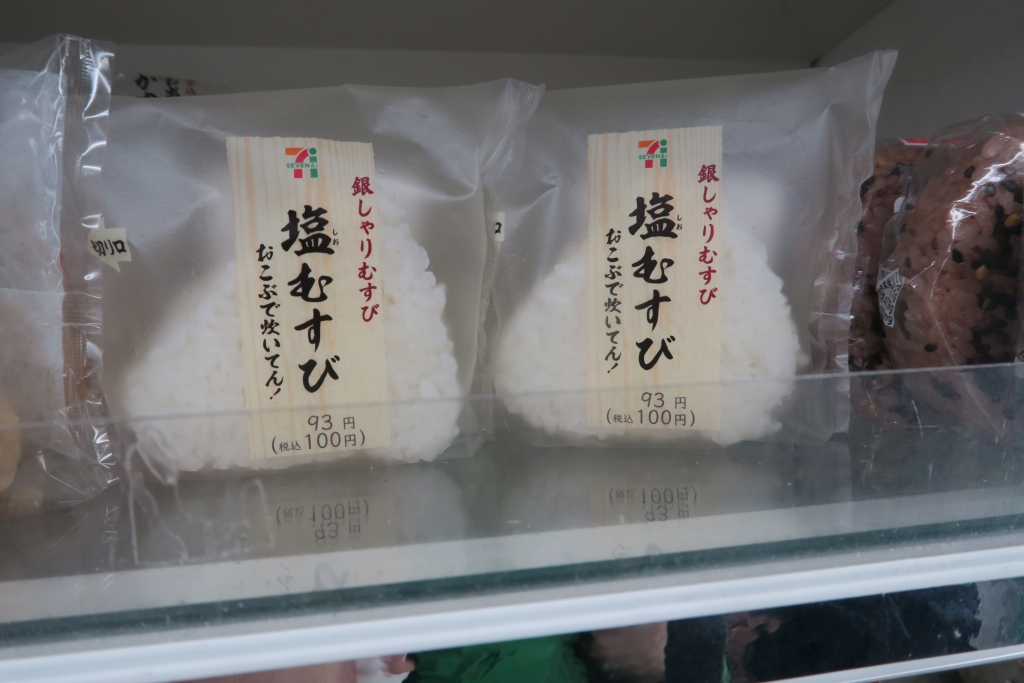 7/11 sell vegan rice balls, and they are super tasty! These are excellent for food on the go. Please note that not all rice balls are vegan. Some are made with fish sauce. Something we’ve found extremely useful was downloading the google translate app to our phones, allowing us to take pictures of the ingredients and translate them into English.

Which brings me to my next point: wi-fi. There is free wi-fi  in almost every convenience store in Japan. It isn’t guaranteed but it’s incredibly likely. This has been extremely useful for using Google translate and checking online for what is and isn’t vegan.

Buying food has been pretty easy in Japan. You certainly have to allow yourself a bit more time than normal to make sure what you’re getting is completely plant-based, but we haven’t gone hungry yet. This is just a portion of what we’ve been buying regularly. And if all else fails, one can always fall back onto rice and vegetables.

Eating out: ‘Sure, you’ll be able to buy your basics from the convenience store, but you’re never going to be able to eat out, or get anything exciting!’ How wrong you are, hypothetical summation of everything we heard! Eating out in Japan has been an extremely painless activity. Our first stop in Japan was in Osaka. The person who hosted us for the few days took us out to see the city one night and to get food. We went to a tasty udon place, where she explained to the chef that we were both vegan, and what we could and could not eat. We found out that the batter used for the vegetable tempura was vegan, and the chef was more than happy to prepare a noodle dish for us, and we had our first meal in a Japanese restaurant. It was amazing! 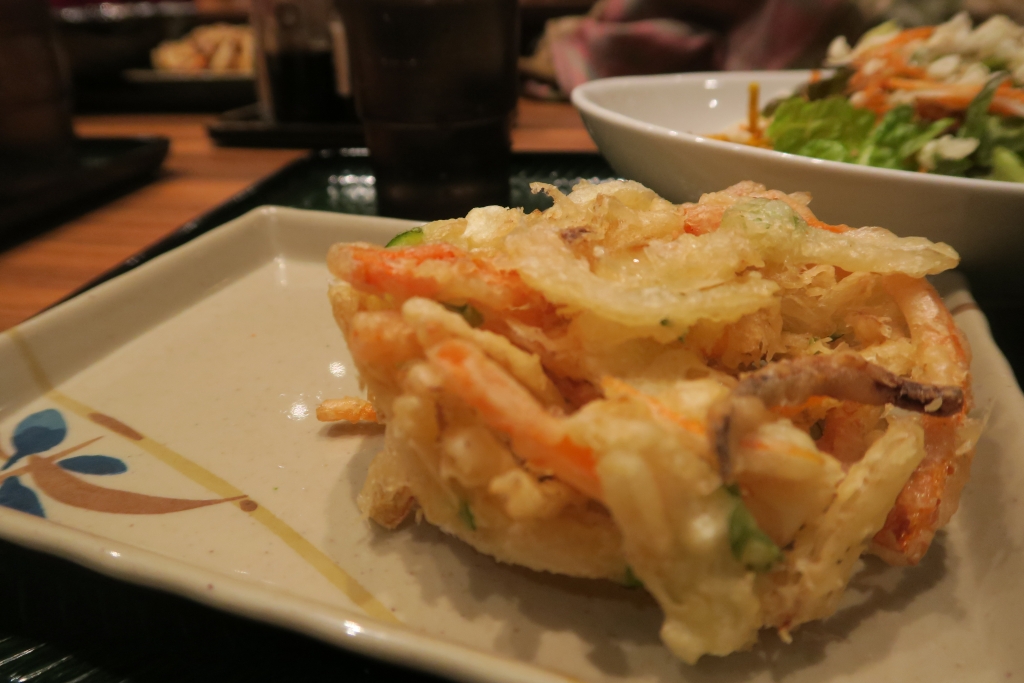 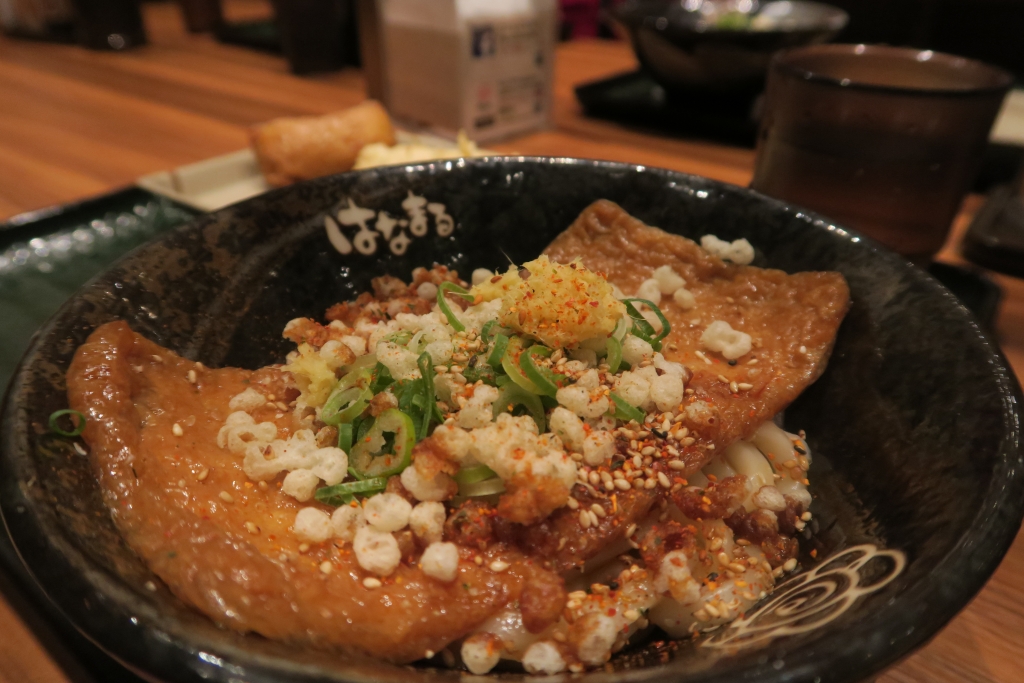 After Osaka, we headed to Tokyo. Thanks to the advice of fellow vegan travellers Cody and Giselle, we knew that there was a completely vegan ramen place located inside Tokyo train station. We, of course, had to check this out. T’s Tan Tan was so good! Before we were even out the door we knew we were coming back. The justification we gave to ourselves was that they were completely sold out of all side bowls, and were only serving ramen by the time we got there, but really we knew we just had to have it again. We shamelessly went back for breakfast the very next day, where I tried a different, and somehow even better, ramen, and got that sought-after curry side-bowl. As satisfied as I was, I was incredibly sad when it was over. 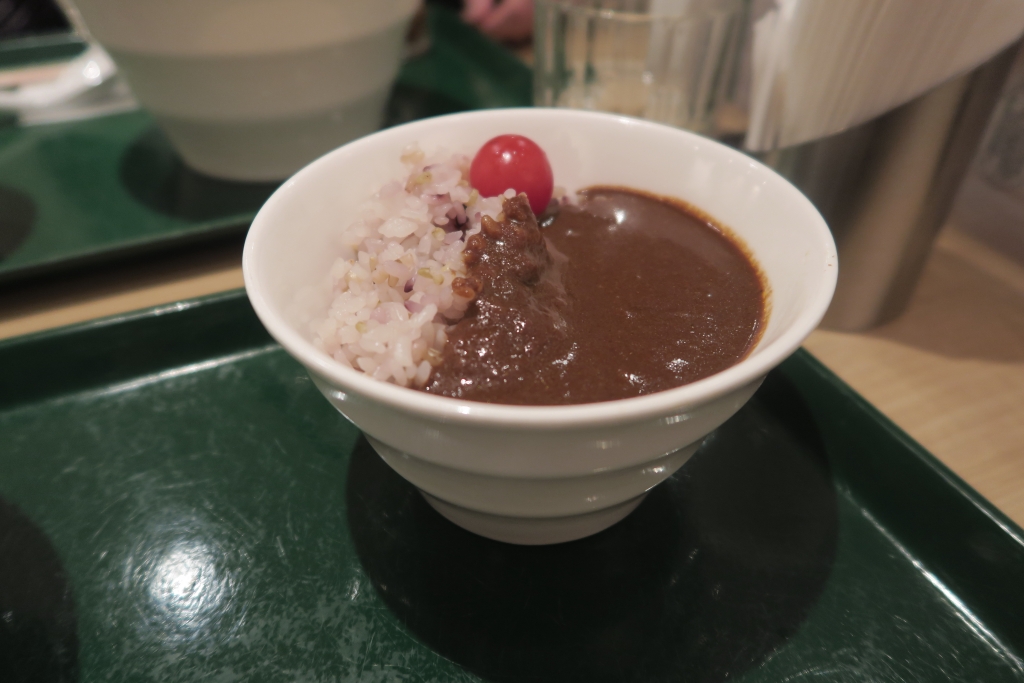 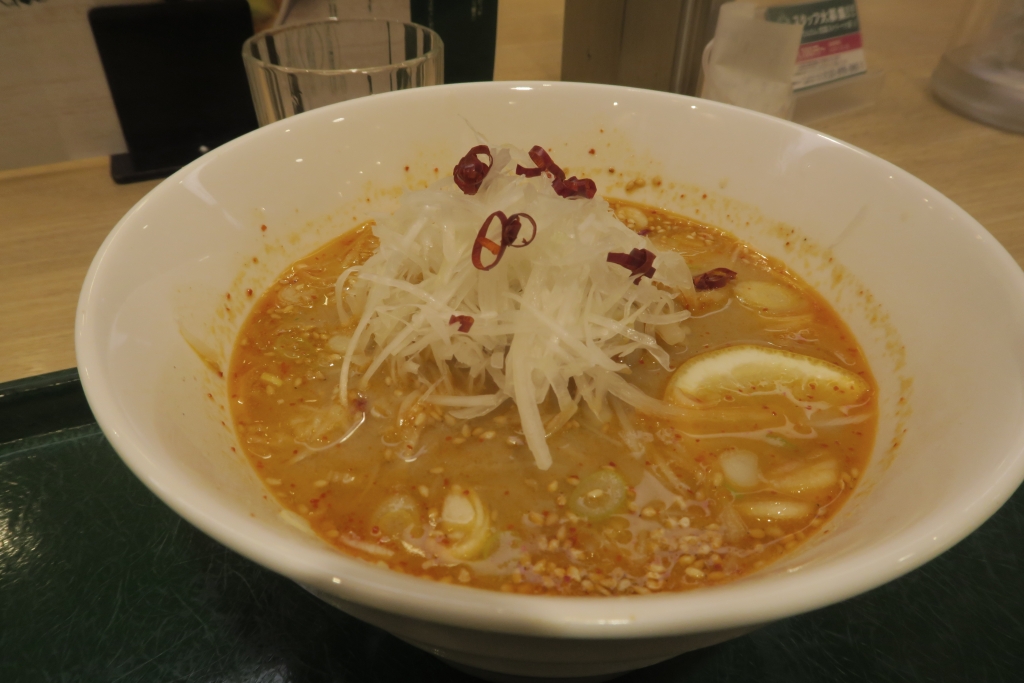 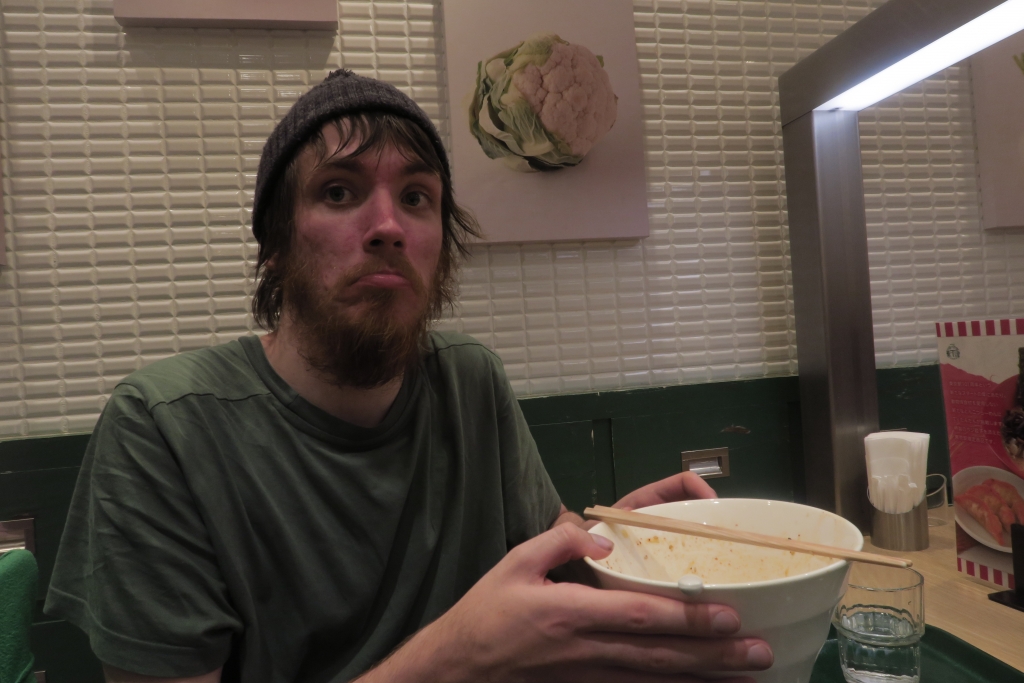 T’s Tantan is not some fluke, lone vegan place in an otherwise un-vegan city. There are so many places for vegans to eat in Tokyo. We went to one other place during our time there. I’d heard a lot about Shojin Ryori, a kind of Buddhist temple food. I heard that this is a reliable source of vegan food in Japan, but that it is incredibly expensive, costing as much as $80-100+. This is, obviously, not a great option for long-term backpackers, so we wrote it off. We did, however, come across Komaki Shokudo, a restaurant in Tokyo offering Shojin Ryori style food at about $10 per person. Apprehensive about it, I read about how it was very close to the food one would get in the temple and that anyone interested should definitely check it out, and decided we should do just that. The food here was really tasty! All meals come with a bowl of rice, and a bowl of miso soup. The presentation is beautiful, and the curry was even better. I love curry. 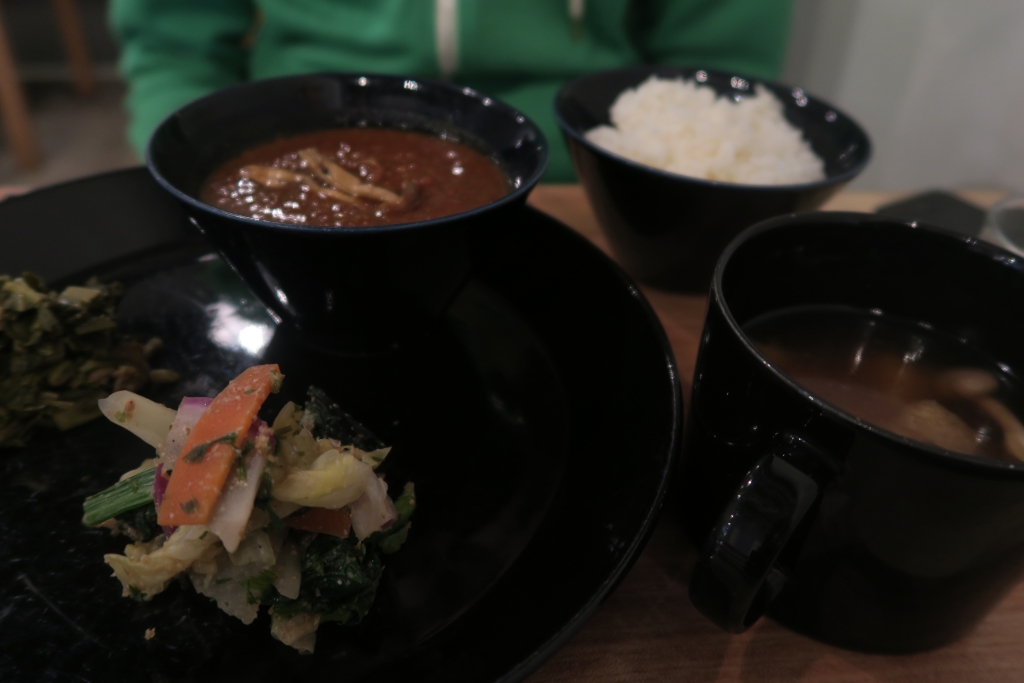 Japan is not a difficult place to be a vegan in at all. And it isn’t just that we happened to be in particularly good cities for it. At the time of writing we have covered more of the country, and everywhere we’ve been we’ve found vegan food. And it’s always been delicious!