The Temples of Chiang Mai 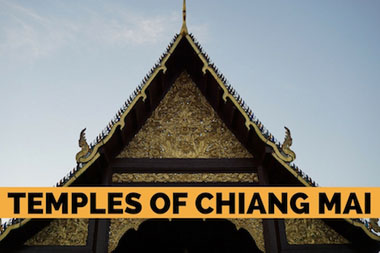 Chiang Mai is known for its beautiful Buddhist wats (temples). There are over 200 wats in Chiang Mai, some dating all the way back to 1296. All are beautifully preserved. 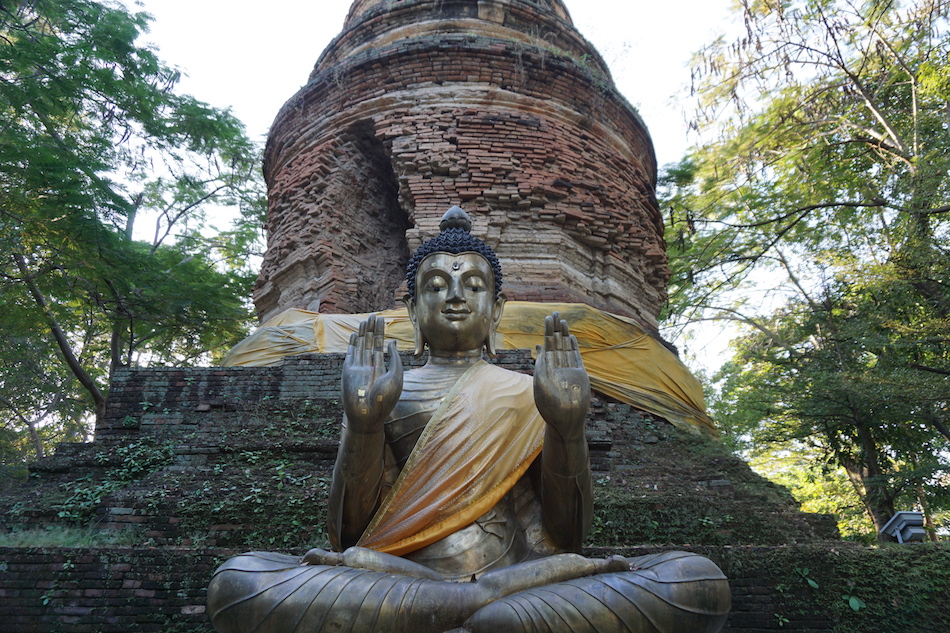 We’ve visited Chiang Mai several times but never really explored the temples other than in passing. We made sure that this time we would visit quite a few, as they are a part of daily life in Thailand, and they add so much charm to Chiang Mai.

Some of these sacred spaces are ornately decorated, and others built simply and modestly from wood. 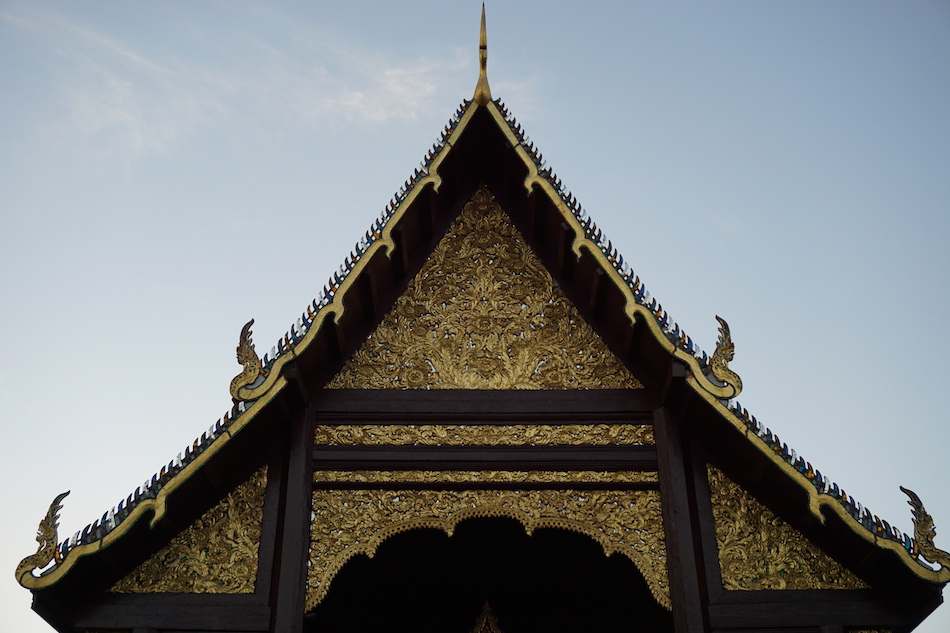 I adore Buddhist temples. The style, the art work, the humming of prayer, the monks in saffron coloured robes, the oversized naga (mythical serpent) watching over the entrance of several wats, and the decorative gabled roofs of every temple kissing the blue sky.

The wats here are different from the rest of Thailand. In Chiang Mai, you can see the influence of the Lanna Kingdom in the beautiful design. 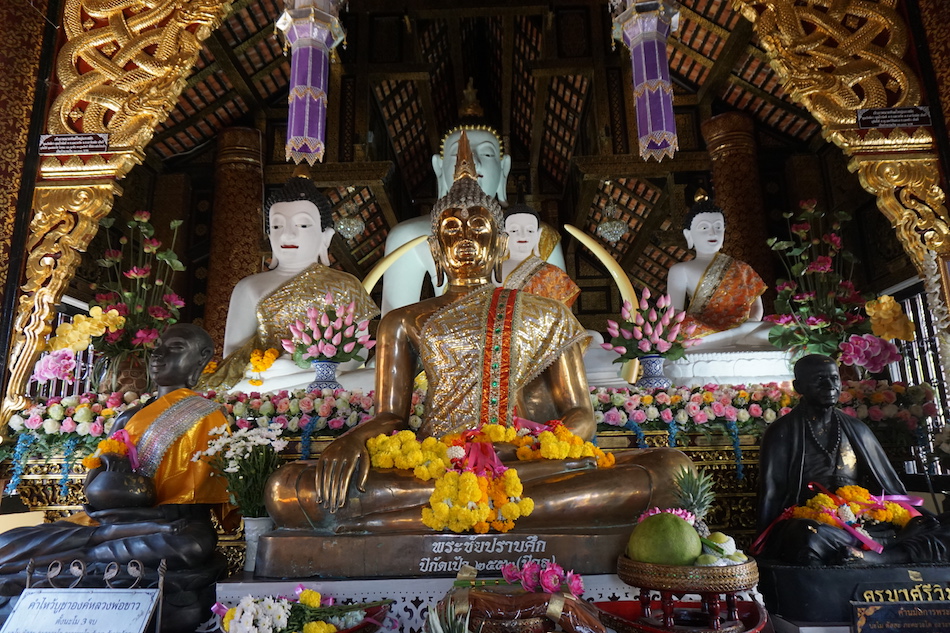 So just a brief explanation about the temples here: A wat is a temple complex where monks live and pray. It includes the main prayer building, a resident building, and a stupa where Buddhist relics are kept.

Stupas, or chedis, are sealed, so the relics cannot be seen. These complexes also usually contain a learning centre for young novice monks, boys, and men who are studying to become monks.

Wat Phra That is the full name of this temple, but it is located near the top of Doi Suthep (Mount Suthep), so everyone refers to it by Doi Suthep. Every song taew and tuk tuk driver will take you up the winding roads to the temple. 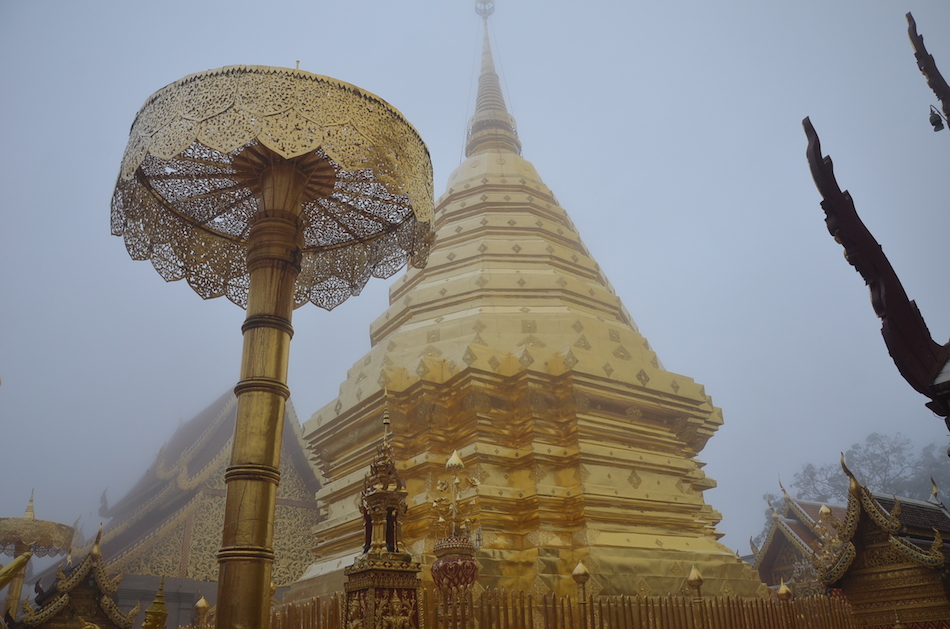 This wat is a very popular destination for tourists in Chiang Mai so it’s best to arrive early to beat the crowds. There is a 300 step staircase that you have to ascend to arrive at the temple, but the ornate naga serpent staircase will keep you entertained. 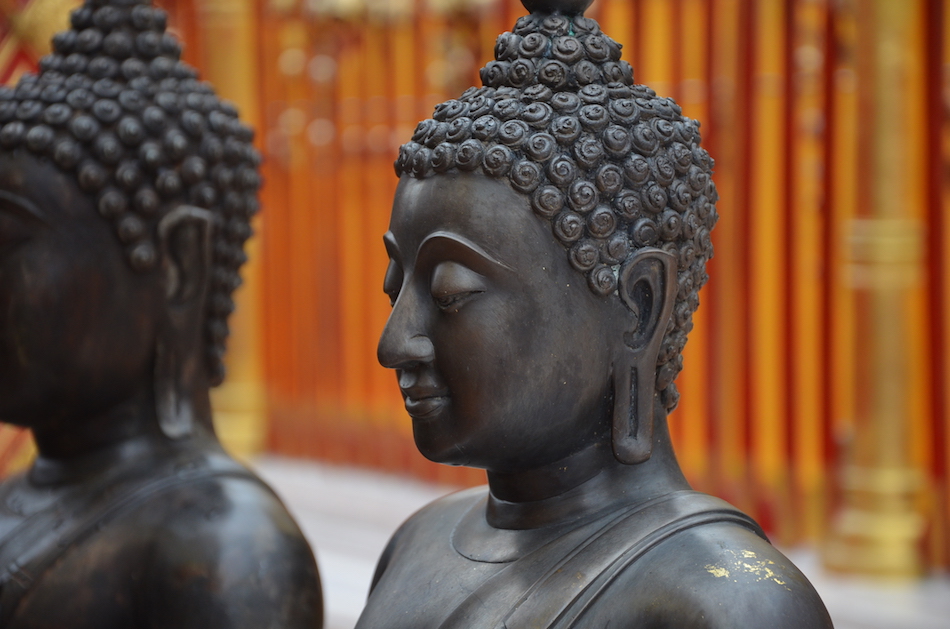 Upon reaching the top, you will be greeted by the golden spire that adorns the centre of the mountain top temple. 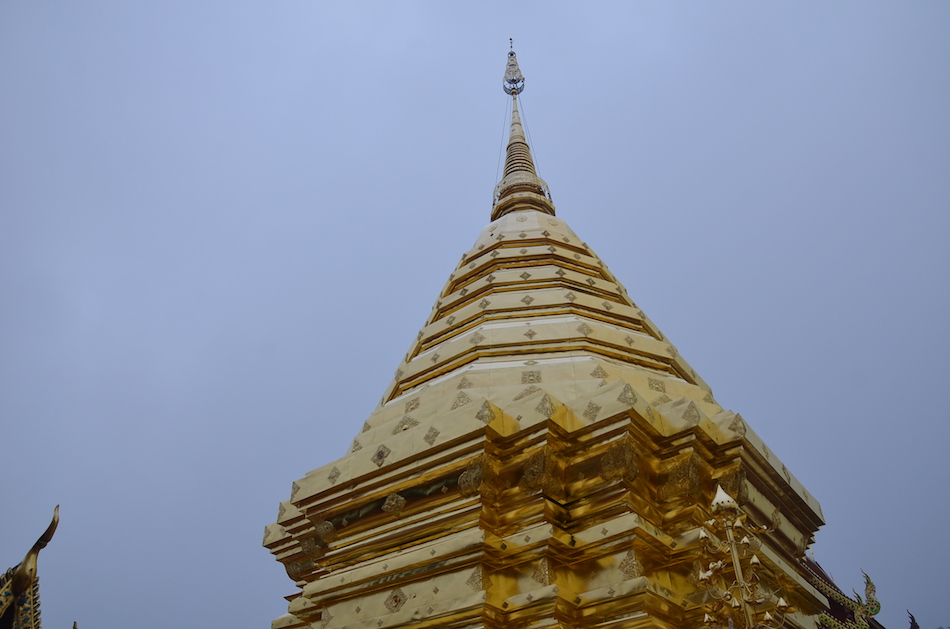 There is also a walkway around the main temple that leads to a large terrace with beautiful views looking over Chiang Mai. 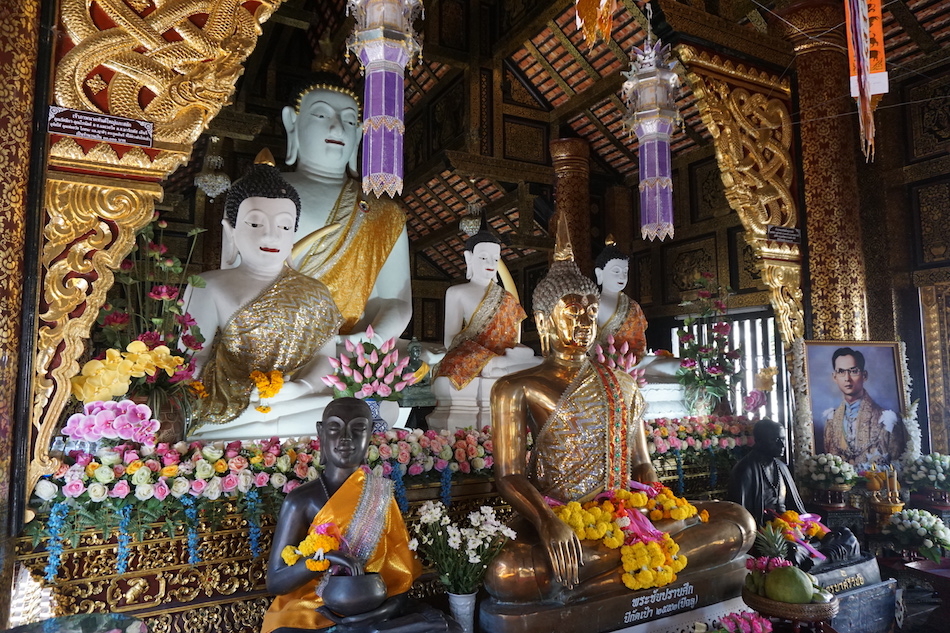 It is much smaller than all of the other temples we visited, and for this reason most people pass it by. 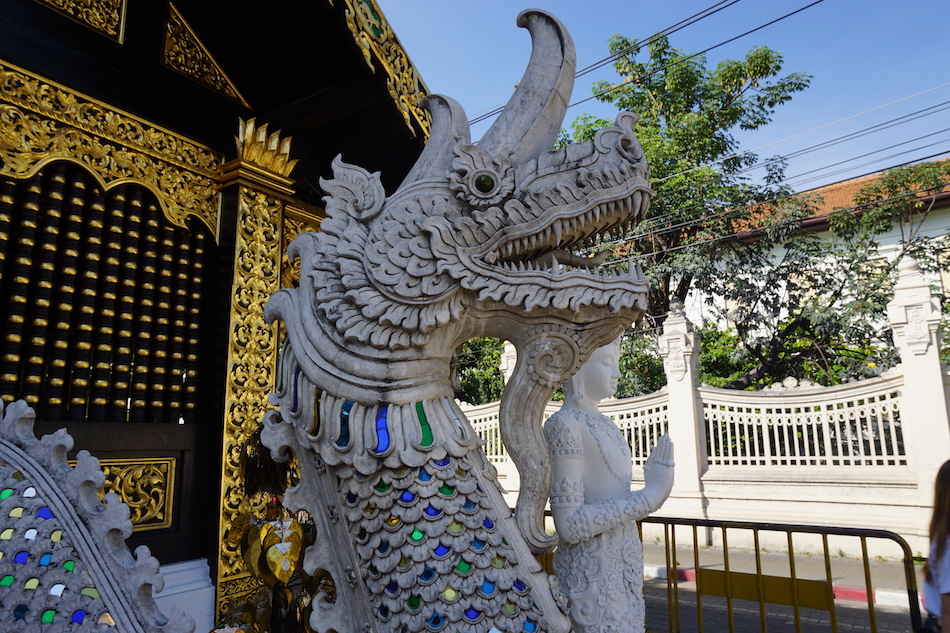 It is beautifully decorated inside with gilded gold posts, walls, and ceilings, and a large white Buddha sits in meditation with 2 disciples on either side. 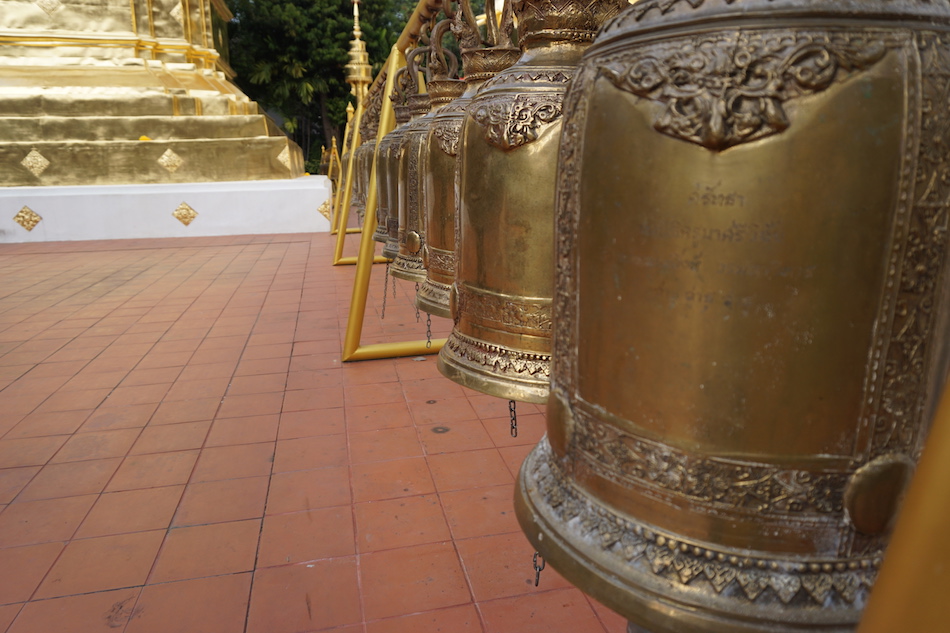 This is a major temple in Chiang Mai that contains Phra Chao Thong Tip, a large image of the seated Buddha cast in copper and gold. 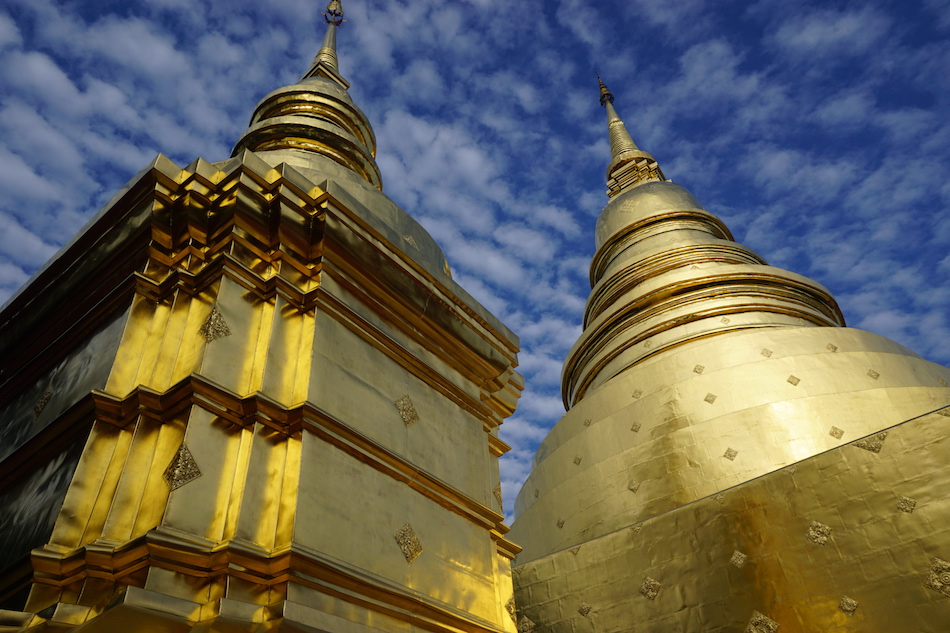 Wat Phra Singh dates back to the 14th century when Chiang Mai was the capital of the Lanna Kingdom. It is one of the best examples of classic Lanna style temple architecture in Northern Thailand. 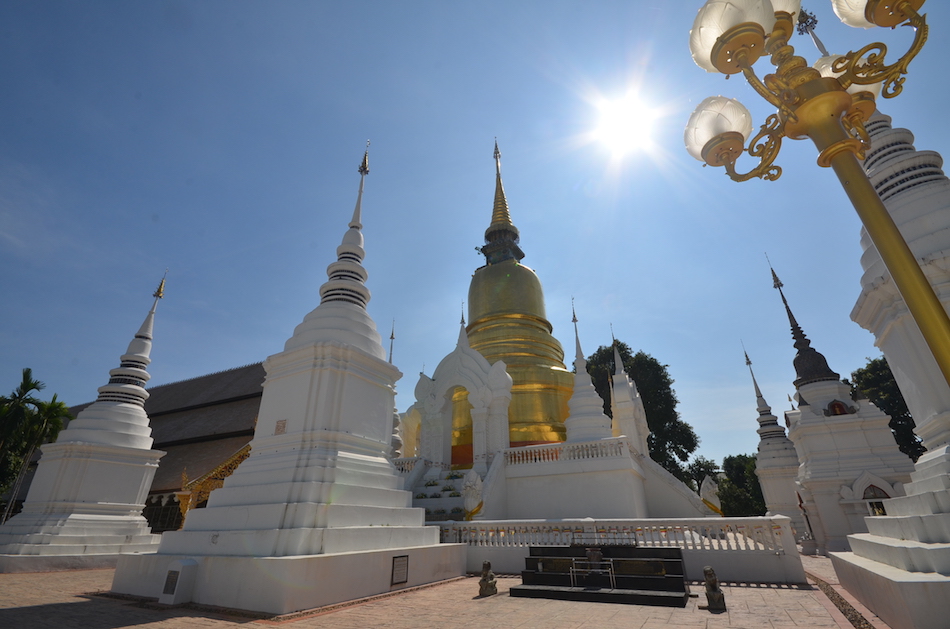 It is worth taking some time walking through this area. 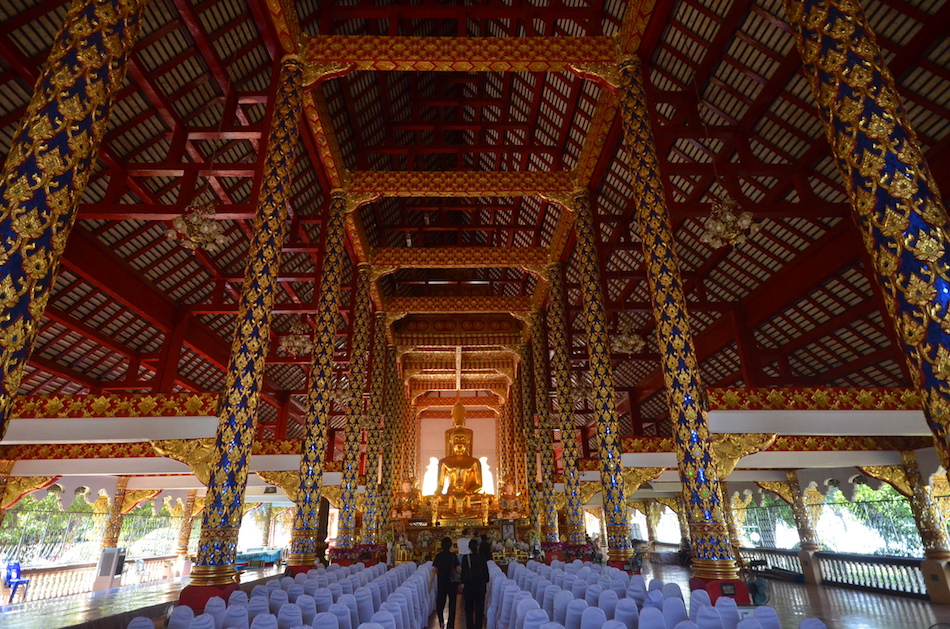 The main building contains a giant standing Buddha image that comes close to touching the ceiling. 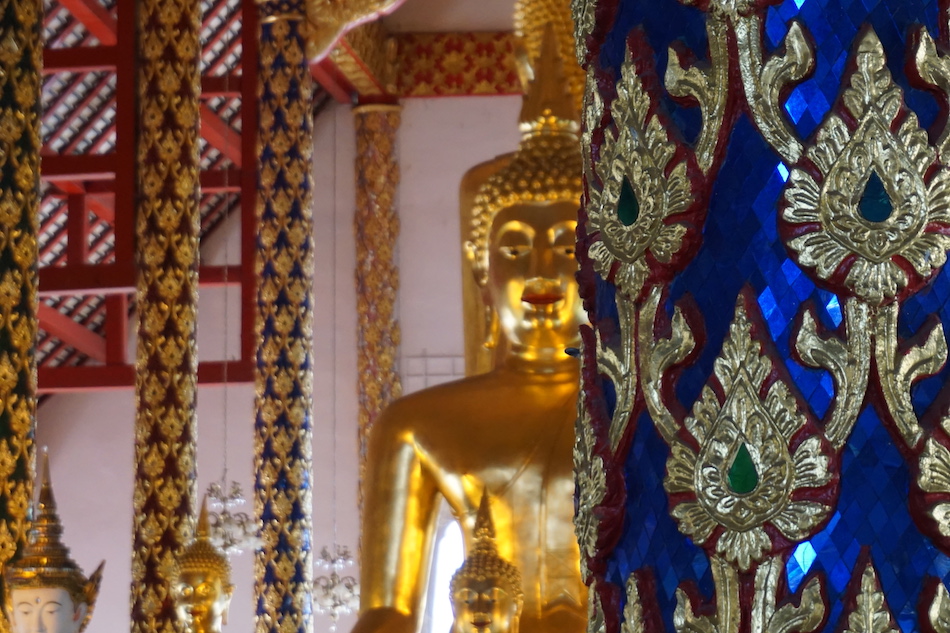 The Sri Suphan temple complex is not visited by many tourists due to its location. It is just south of the Old City and on the road in which the Saturday Walking Street market is held. 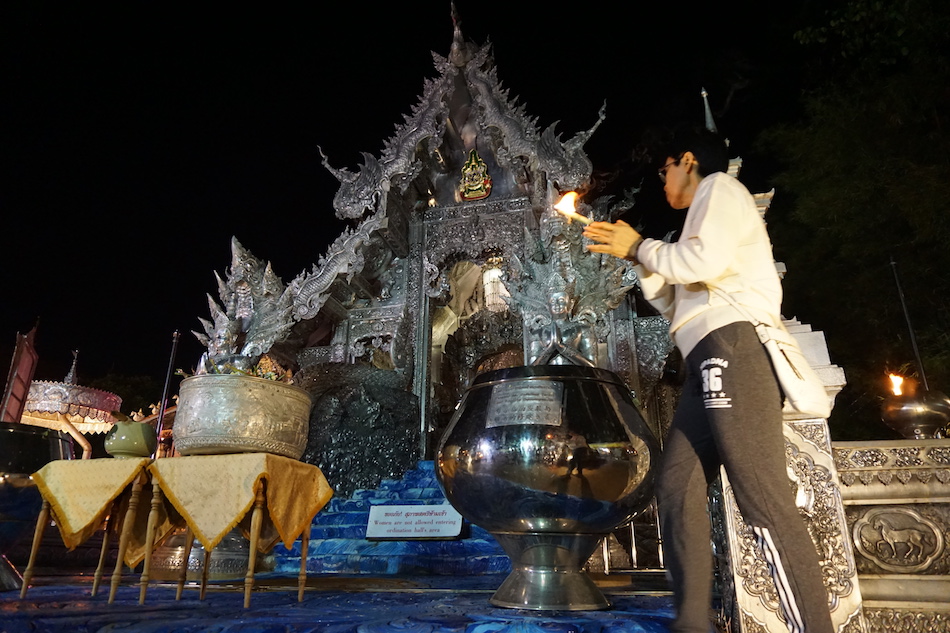 There is a beautiful silver covered ubosot (chapel) that you will see as you enter the complex. The intricate silver work is very detailed, and so beautiful, so do spend some time looking at it up close to admire the detail. Silver panels and silver-tiles are painstakingly carved by silversmiths. 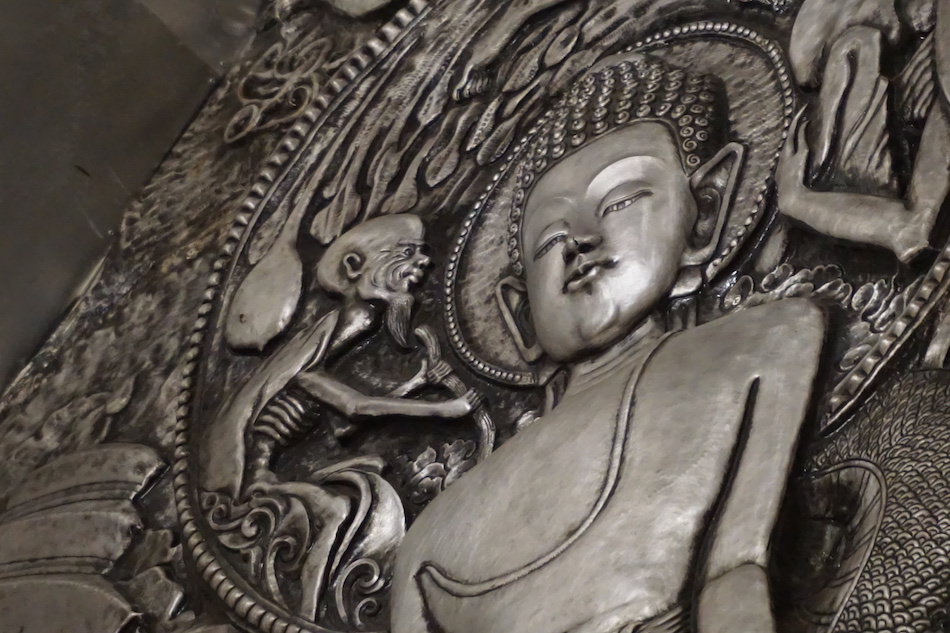 These panels depict scenes of Thai angels hovering over clouds, elephants strolling through the jungle, and key moments from Buddha’s life.

The rest of the temple complex is worth exploring as well. The main temple has a beautiful interior and a silver workshop where you can see monks and artisans at work creating the silver panels. 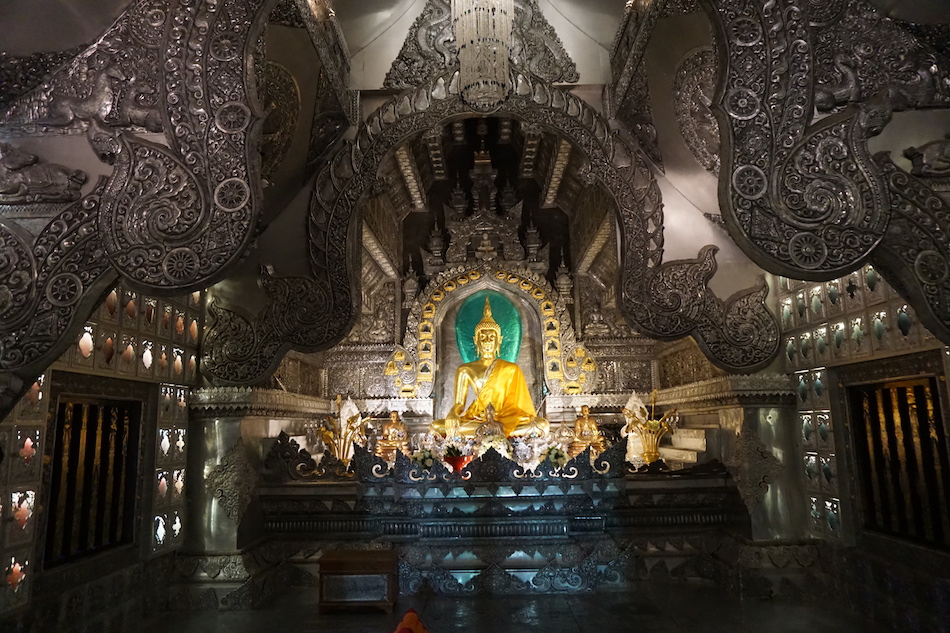 Women aren’t allowed to enter the main ordination hall with a sign in quirky English explaining why:

*No Women Allowed Inside*

Beneath the base of Ubosotha in the monastic boundary, many precious things, incantations, amulets and other holy objects were buried 500 years ago. Entering inside the place may deteriorate the place or otherwise the lady herself.

According to this Lanna Belief, ladies are not allowed to enter the Ubosotha.

Not the clearest explanation, is it? 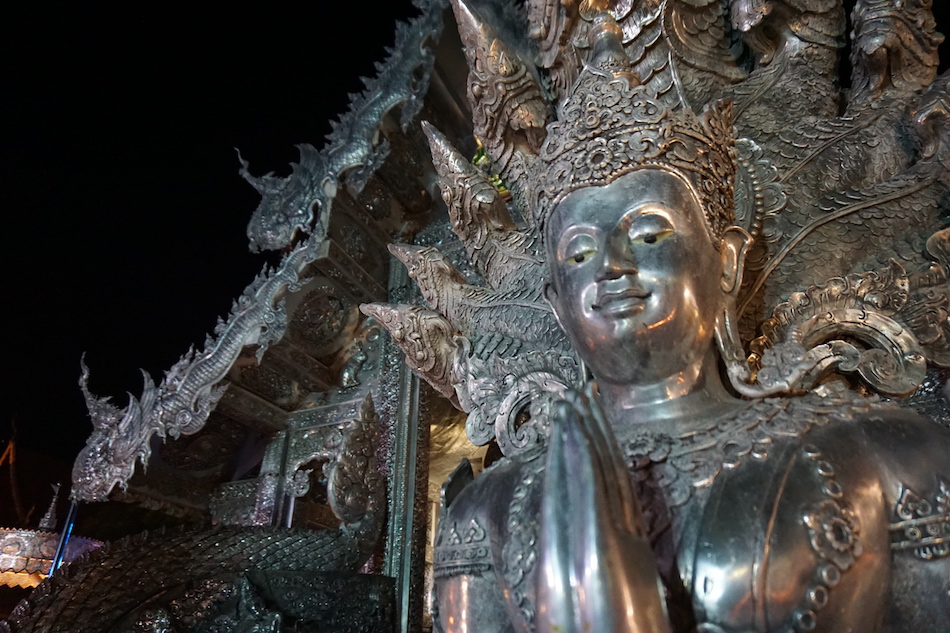 Wat Phan Tao is one of the older temples built in Chiang Mai, likely towards the end of the 14th century. 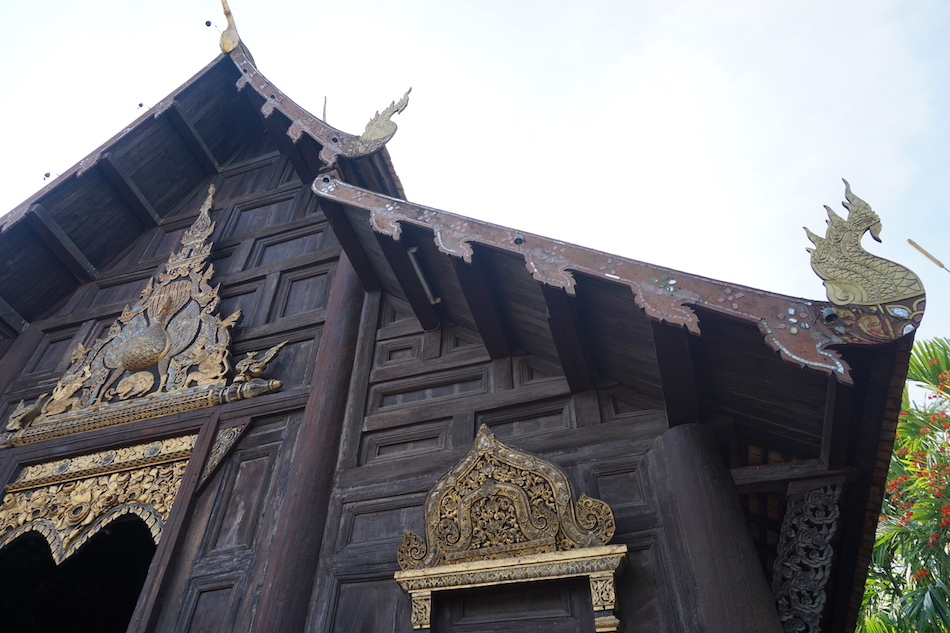 The viharn (building used for assembly and housing Buddha images) is an all wooden building constructed from teak panels. It is one of the few remaining all wooden structures of its sort in Chiang Mai, and also probably the least ornate; and it is my favourite. 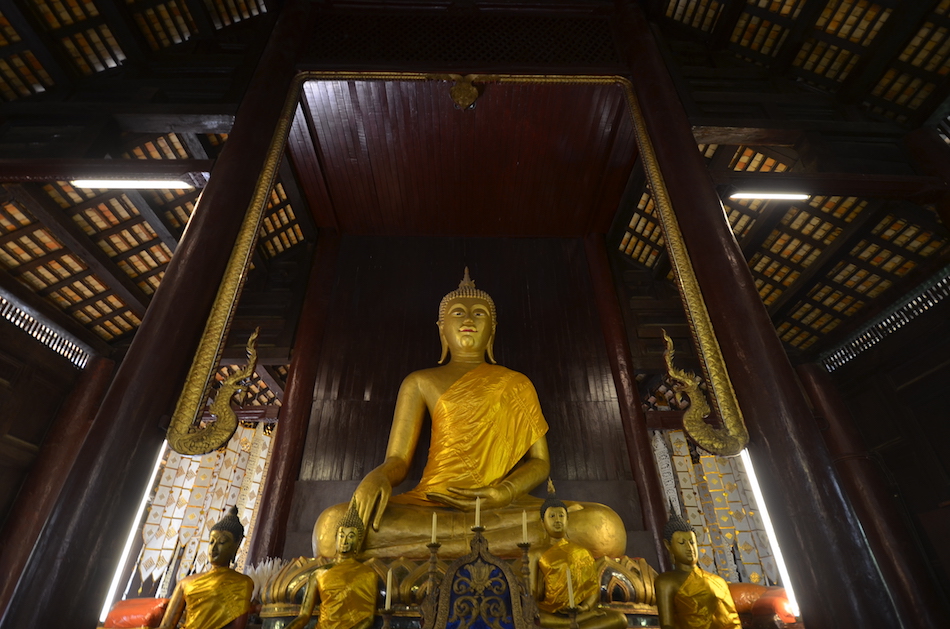 This is a classic unpainted teak building that is just as beautiful as the fancy concrete and stone buildings that the temples are constructed with nowadays.

Inside you will find large red painted teak pillars supporting the building. 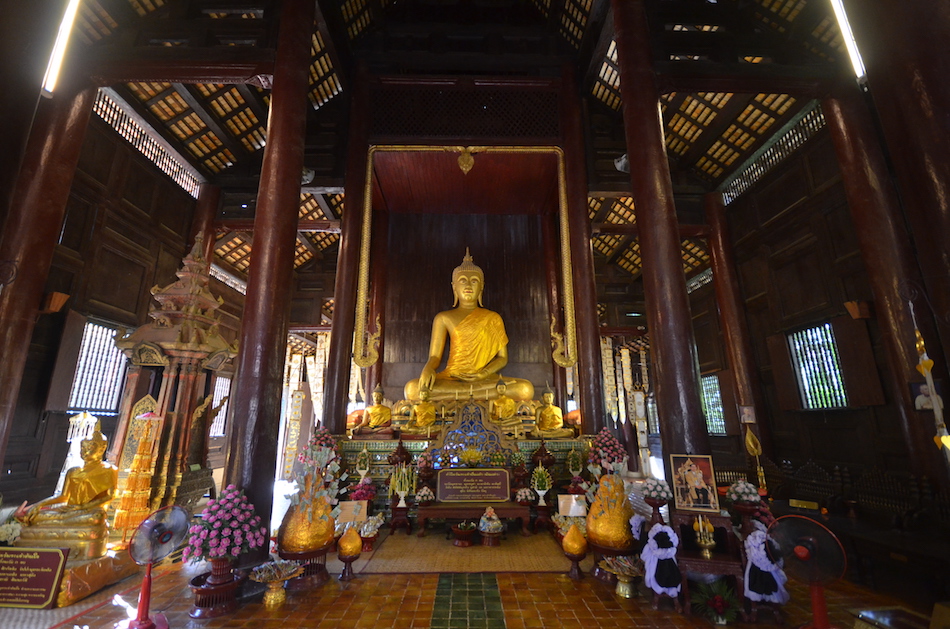 Long woven prayer flags hang from the ceiling, and a number of old wooden boxes decorated with gold leaf containing old Dharma texts are also contained in the viharn.

Chiang Mai would not be the same without spotting a beautiful gilded Buddhist temple at every corner. If you plan on spending a few days here, I highly suggest a visit to a few of these beautifully preserved sacred Temples of Chiang Mai.