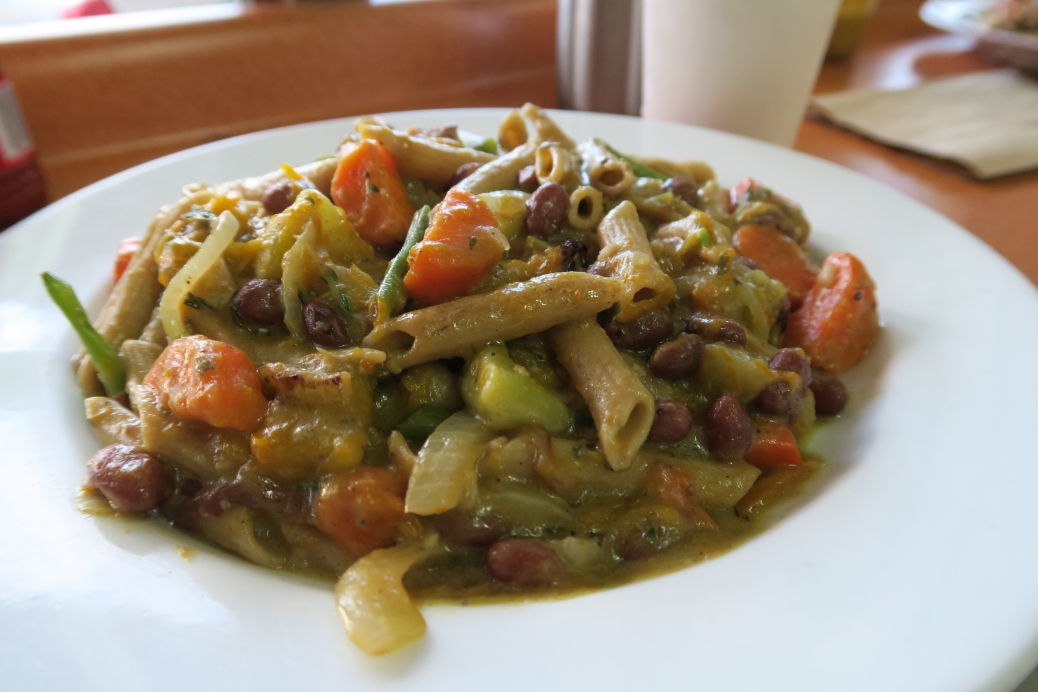 It was no secret that it was going to be easy to find vegan things in New York City. According to a master-list I found after a quick google search, one could eat at a different vegan restaurant every day for a little over a month before having to venture into the Vegetarian/Vegan-Friendly side of things. It would cost a pretty penny, but it would be an awesome month. It isn’t as immediately obvious how easy it is being vegan in other places, so I have decided to do a little bit of a round-up at the end of each place from now on to highlight that aspect of our stay. Of course, if you’re following the adventures closely, you’ll see how we’ve been finding vegan food in different places but this will be an easy short-cut to bookmark for your future reference! I hope you’ll like it!

Foraging– There are fruit trees everywhere in Jamaica. Many locals have loads of fruit in season and just don’t use it. If you can reach the tree from the road, it’s generally okay to assume you can take the fruit. In cases where the tree is farther into the yard, asking the person who owns the property if you can have some of the fruit is a good way to go!  Depending on the season at the time, you may not need to buy fruit at all. We certainly had our fill of Ackee, Soursop, Coconut, and Tamarind in Kingston, though we sadly missed Mango season in this region. We managed to catch up with the mangoes a little bit in Montego Bay, which was nice, though they were a little over-ripe. We are currently in Negril, where the Ackee is still in season and growing quite close to our hostel!  The seasons are different from one side of the island to another so be sure to ask a local what’s in while you’re there! When foraging in Jamaica, definitely look up how to prepare the foods you collect because some of them may have poisonous attributes.

Restaurants- I’ve said it once, I’ll say it again- New Leaf Vegetarian is an awesome restaurant. But okay, I’ll admit
that there are other vegan options around Kingston. We personally went to two other vegan places. One raw place on Constant Spring Road called MiHungry and one place, right next to a health food store, called Natural Touch. We weren’t able to check out any other vegan places, as we mostly eat in, but we were still very observant of all the options arounds us! In addition to those and other beautiful vegan places, there is also a handful of Ital places in the area, essentially pescatarian restaurants, that offer vegan options. There also a few salad bars, Indian restaurants, and juice bars that have options for us vegans as well. 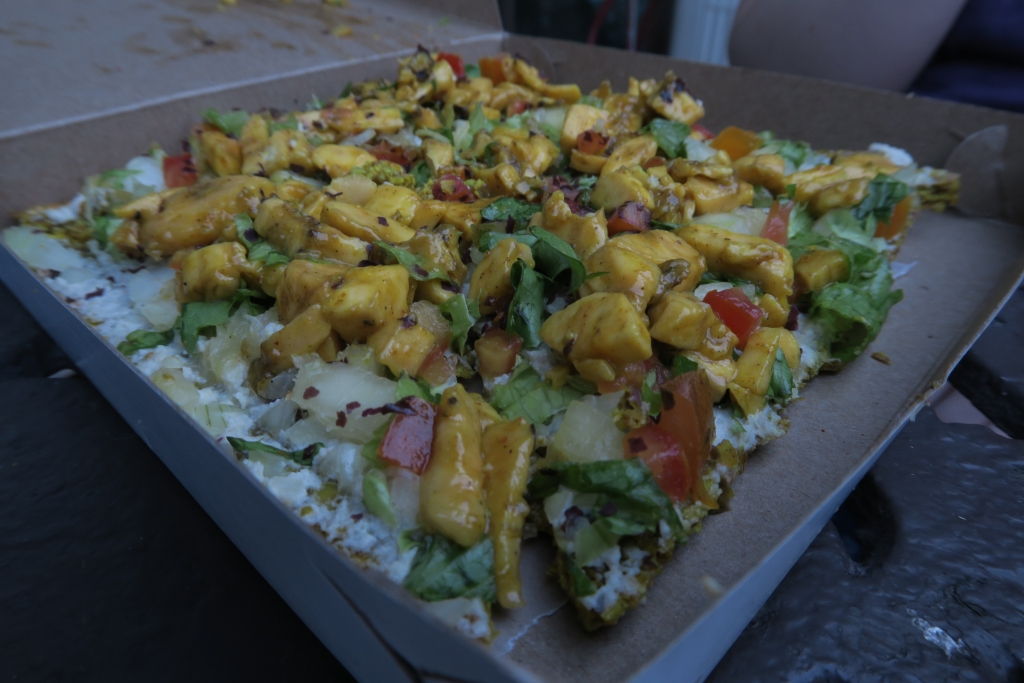 Eating at Home- If you happen to be on a budget while you’re traveling, cooking at home (in your hostel/hotel/guesthouse) is a good idea. However, you’re not going to save a whole lot of money if you want to be making big elaborate dinners complete with sides, as it is already fairly cheap to eat out here. If you’re in the Rice&Beans club like Ross and I are, though, you could potentially save quite a bit. Cheaper supplements to the rice and beans diet include the extremely cheap Jamaican okra and callaloo, available at almost any grocery store. Every grocery store we’ve been to has had soy milk, some vegan cheeses, vegan “butter”, and some accidentally vegan things as well. In fewer grocery stores, we’ve found veggie burgers, falafels, veggie sausages, etc. If you want to spend a little extra, you can stock up on mock-meats and non-dairies at will! As for myself, I’ve grown to quite like the rice, beans, callaloo, and jerk seasoning supper. 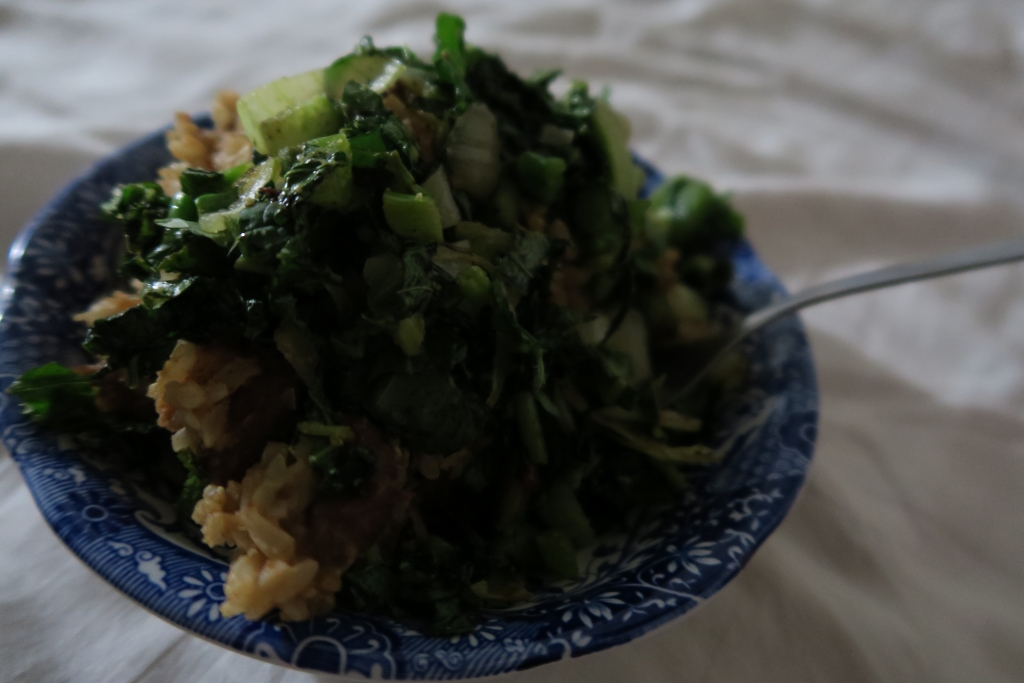 Summary- In short, it has been practically effortless being happy, healthy, full-bellied vegans in Jamaica. Were we staying in more touristy parts of town we may have found it more difficult, but as it stands, it has been a breeze. We’ve been able to explain the vegan diet to people that we meet fairly easily by using “Ital” as a starting point and working from there.

I can’t believe that we’re just a few days from saying goodbye to this beautiful, amazing, wonderful place and saying hello to the new and exciting Peru! I’ve got to run now, as I have some rice and beans to eat! I hope you’ve enjoyed this vegan round-up from Jamaica! Please let me know in the comments if you want more of these round-ups/if you want something different in the next ones!