Ellie’s Round Up – Peru! 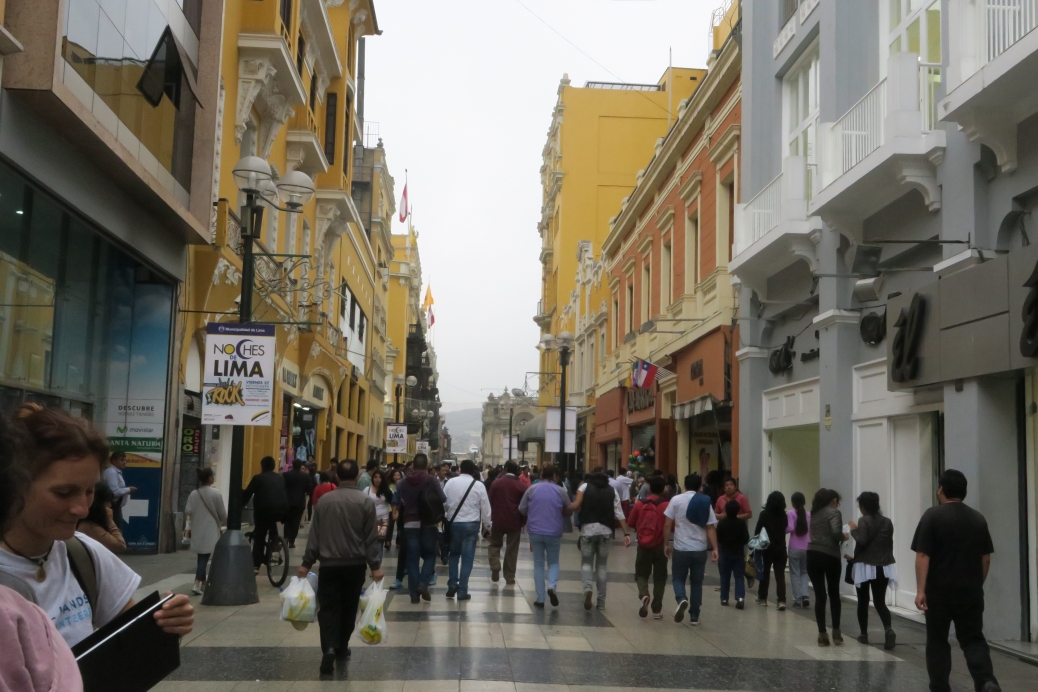 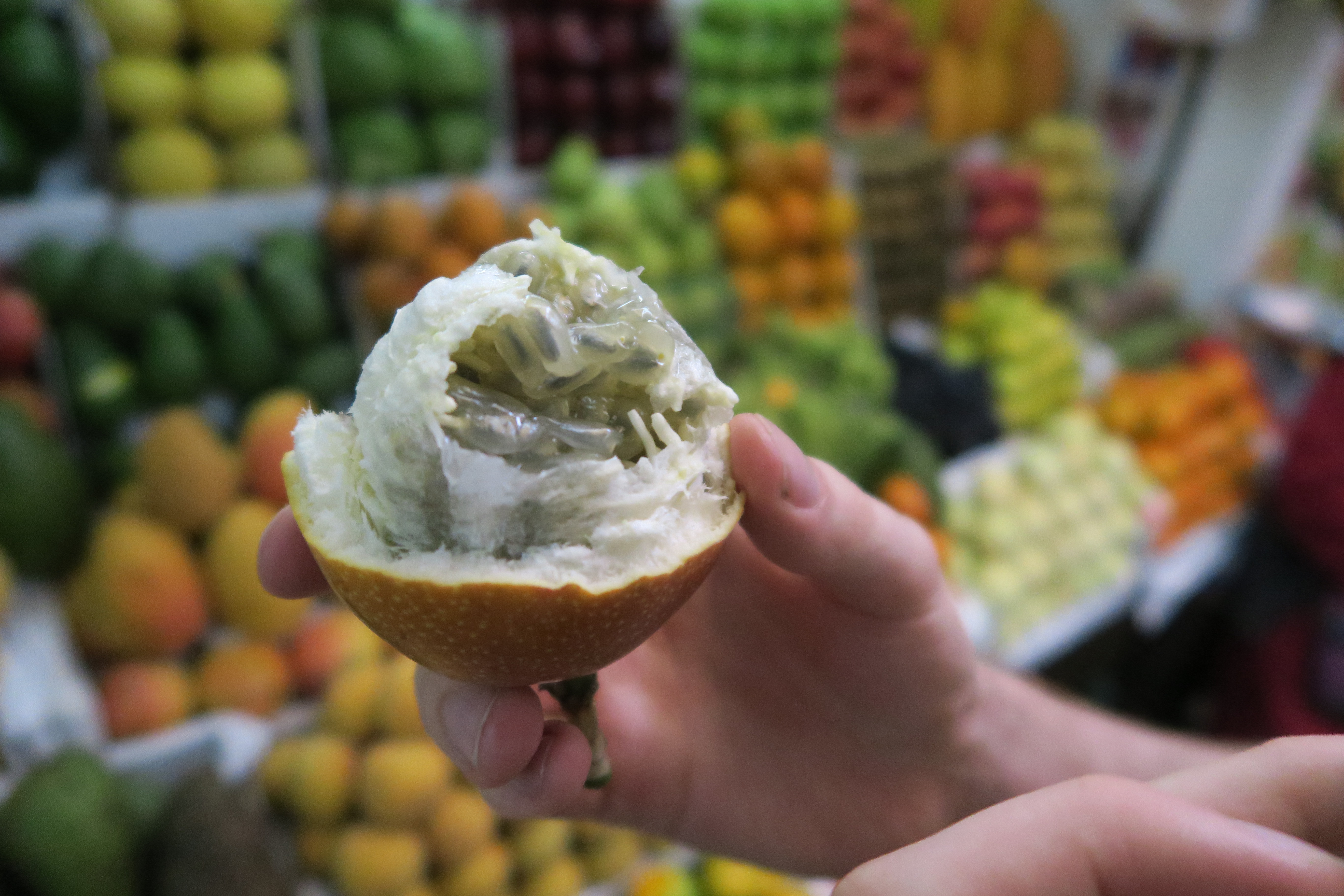 Foraging (sorta)
In Jamaica, it was easy to write an entire section on foraging. There were fruit trees around every corner and locals who didn’t care to use them. They didn’t really care if someone else used them, either! Our bellies were full, and so were our wallets. In Peru, on the other hand, it was not nearly so easy to find free food. We mostly stayed in cities and did not find ourselves in the parts of Peru where fruits fall fresh at one’s feet. Therefore, this little section is mostly about the concrete-jungle that is Lima, and the “foraging” that one can do there. 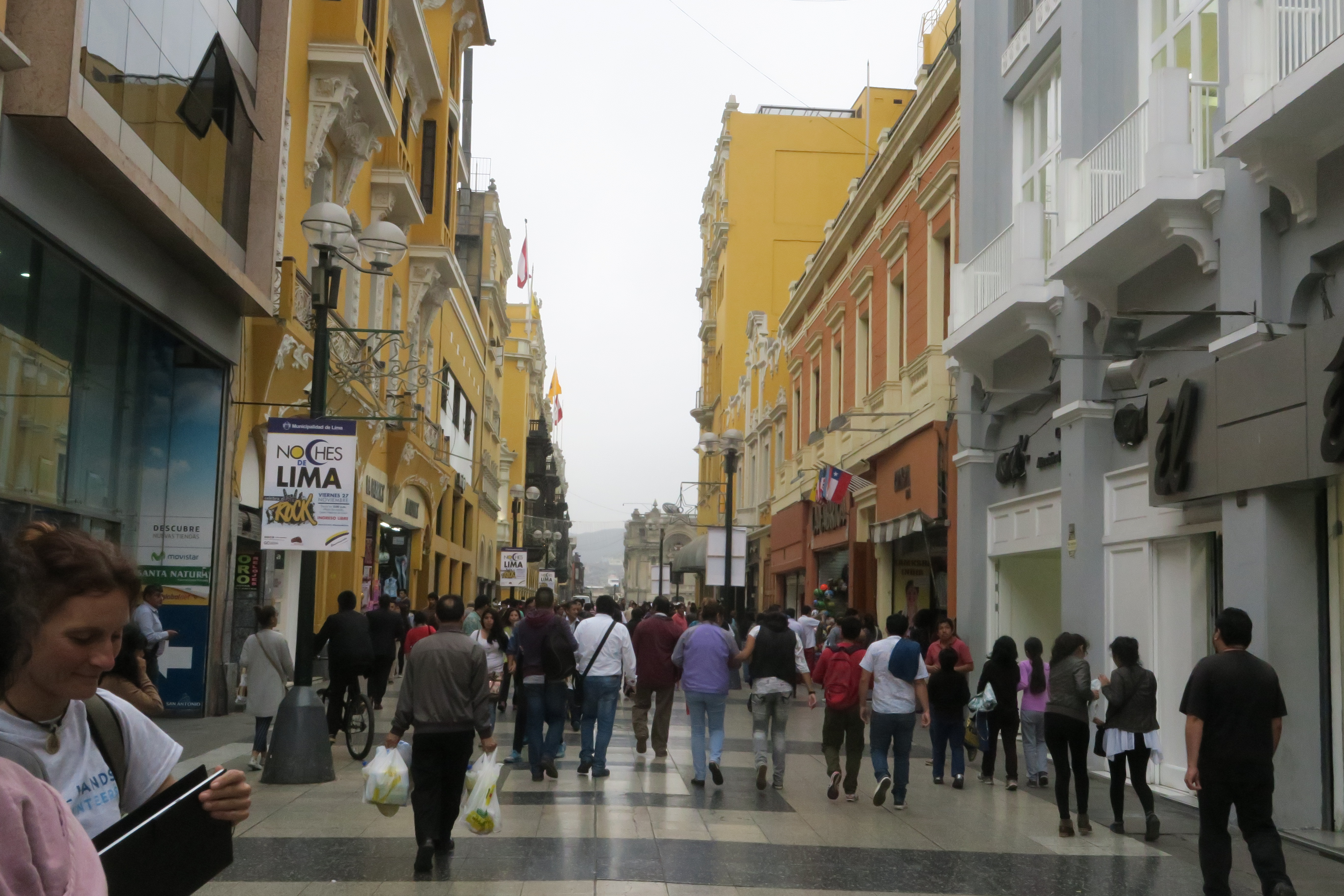 Lima is a wild, wild place where it takes fifteen minutes to take a five minute walk. The traffic there is terrifying (and a bit nonsensical), both for pedestrians and those in cars. After a few days of being angry that the light is green and you still can’t cross, you learn that the traffic in Lima is a bit like Whose Line, in that everything is made up and the crossing signs don’t matter. Between the cars, the tall buildings, and the walls of buses, you do find some vegetation. This is in the form of amazing markets. One of the first days we were in Lima, we were taken to a fruit and veg market in the city and it was overwhelming. There were rows upon rows of people selling every plant imaginable. There was an entire rainbow of fruits that I had never heard of before, let alone seen in person. Because I am the kind of person who ate all their greens growing up (yes, even brussel sprouts!), this was an incredible experience for me. In addition to the big established markets in the city, there are also always people selling freshly cut fruit and fruit juices on the street. Now, why am I counting these things as foraging? Because of how incredibly cheap it was to pick stuff up from these places. Walking the extra fifteen minutes to the market means some sore feet, for sure, but it also means hanging out with locals, practicing your Spanish, and saving quite a few soles on vegetables that tasted way more fresh and rich than that which the grocery has to offer. (It’s also just really great being in a place where everything is visually really obvious about whether it is vegan or not.) I also call this foraging, because sometimes one just can’t resist buying a piece of cactus fruit for what was less than thirty cents, while walking around town. That’s basically the same as picking fruit, right? Only in this scenerio, you’re supporting the very local economy. Markets and people selling fruits on the streets existed in Cusco, as well. However, it’s a much quieter city where you might expect that and Lima’s little markets are more of a pleasant surprise and a bit more of a colourful story. I’m sure there are other places in Peru where the foraging is a little more literal, but I have no authority to write on that. So onwards! 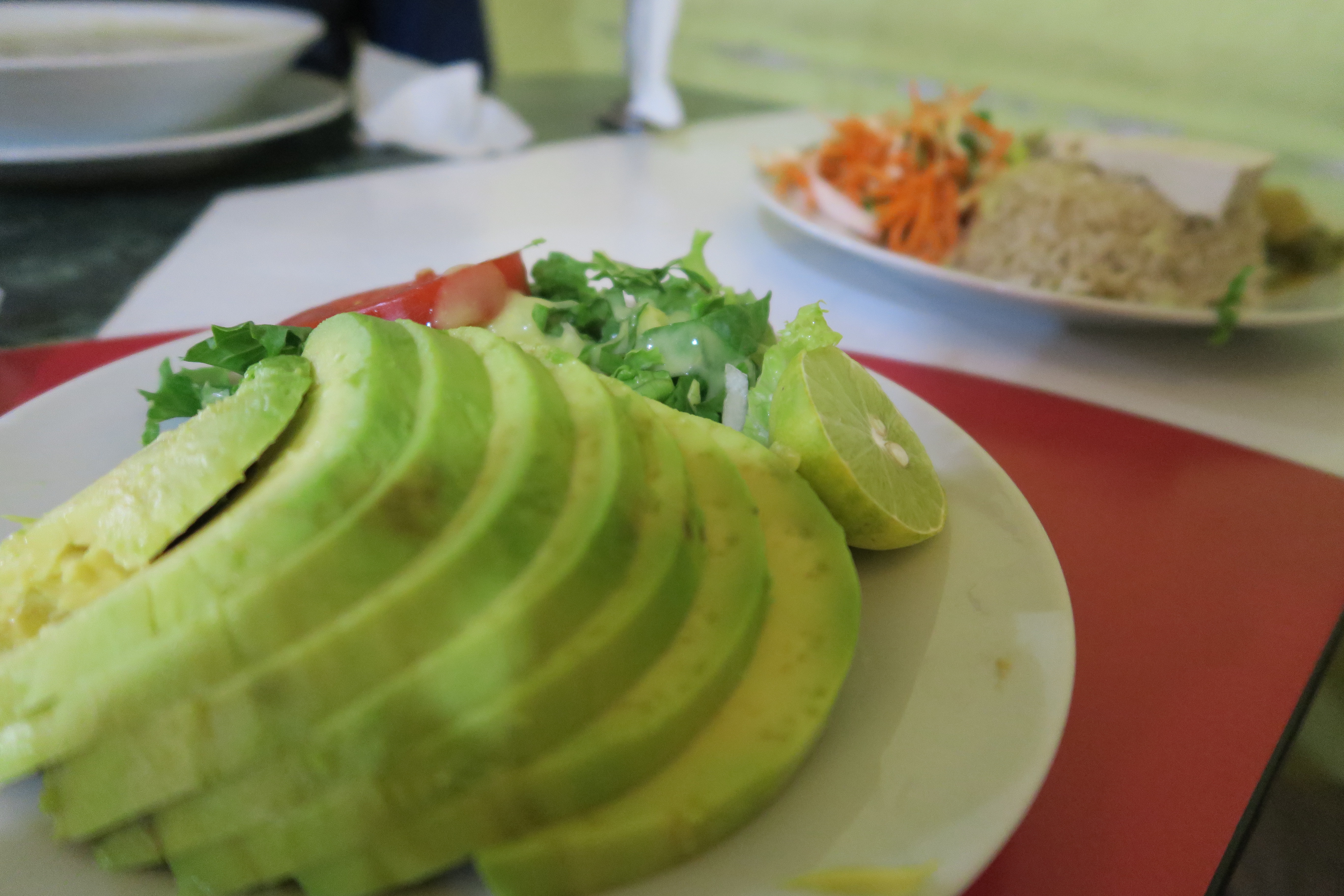 Restaurants
I really really did not expect that we would have such an easy time dining out in Peru. I had done some research a few months before our trip and found that there were places that were very accommodating to vegans, if you knew how to ask, if you were very clear with your Spanish, and if you were in the Miraflores district. Lima, Lima held its’ own, however. While we never found a place, in all our wandering, networking, and googling, which specifically identified itself as ‘vegan’ in Lima, it was so easy to find vegetarian places. Like, ridiculously easy. And those vegetarian places were more than happy to help us build a vegan meal. We never once got something non-vegan by accident. Additionally, there is also a Hare Krishna temple in the historical downtown area of Lima, just down the street from the Backpackers Hostel. They have a fully vegan set menu every day for just 8 soles (about $2.40 at the moment.) a person. The portions are huge, the food is as healthy as it is delicious, and there’s no anxiety about cross-contamination! 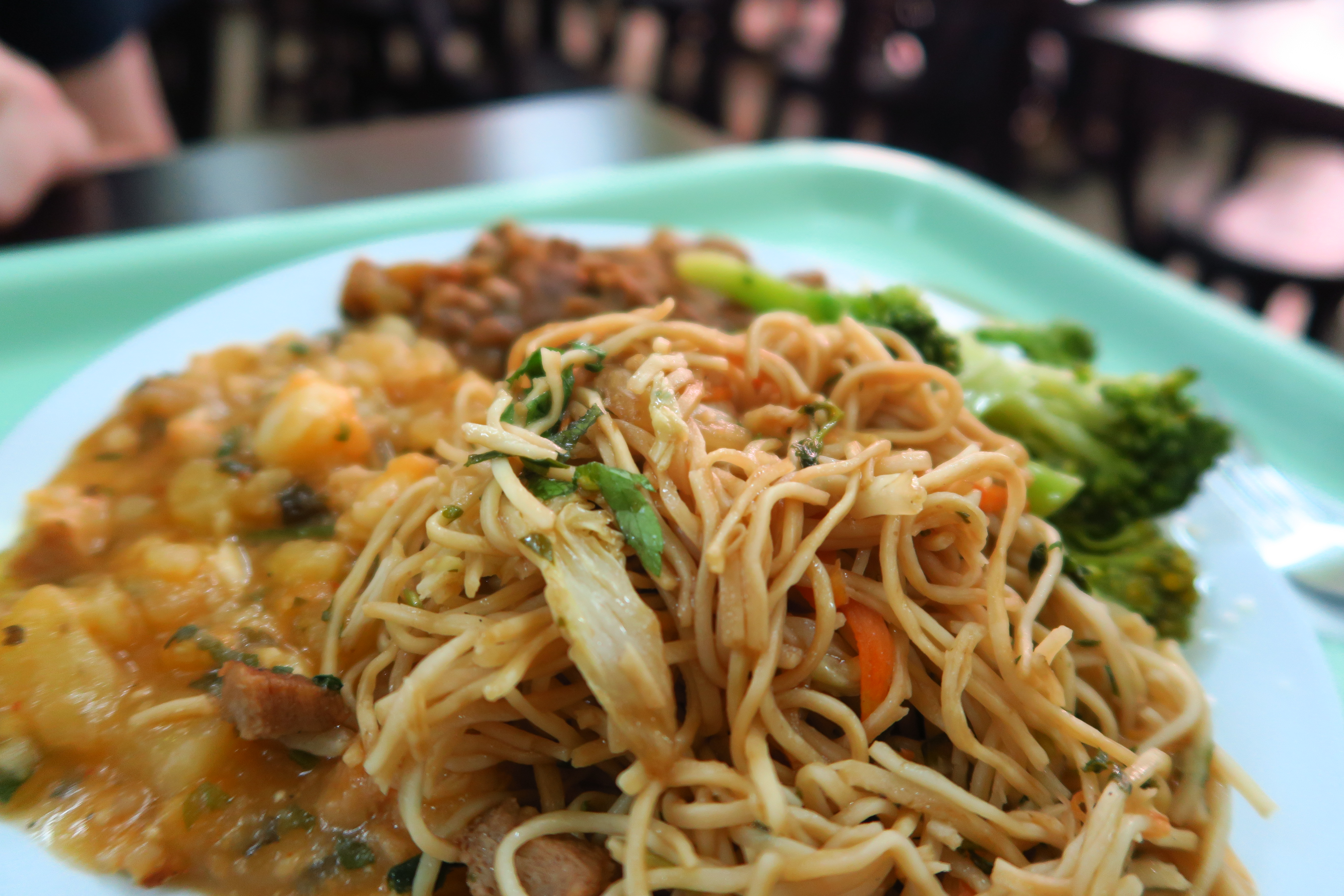 Given the combination of these two lovely options it is surprisingly easy to dine out as a vegan in Lima. Even more so surprising, however, is how easy it is to dine out in Cusco! I almost cried when Ross and I arrived at Green Point and found that the sign itself read, “vegan food.” After eating so much quinoa and pita (our Peruvian equivalent to Rice and Beans), it was like a miracle to order something interesting. An man, was the food interesting. But that’s another point! Point is, we learned from the staff of Green Point that there are two Cusco locations for the vegan restaurant and that there are other vegan restaurants not too far away from that area, as well. We weren’t able to check them out while they were there, but it’s good to hear it from a vegan restaurant owner! The vegan place was definitely way more expensive than eating at a Hare Krishna temple, but the food was very different, the portions bigger, and the bread… Oh my god, the bread. 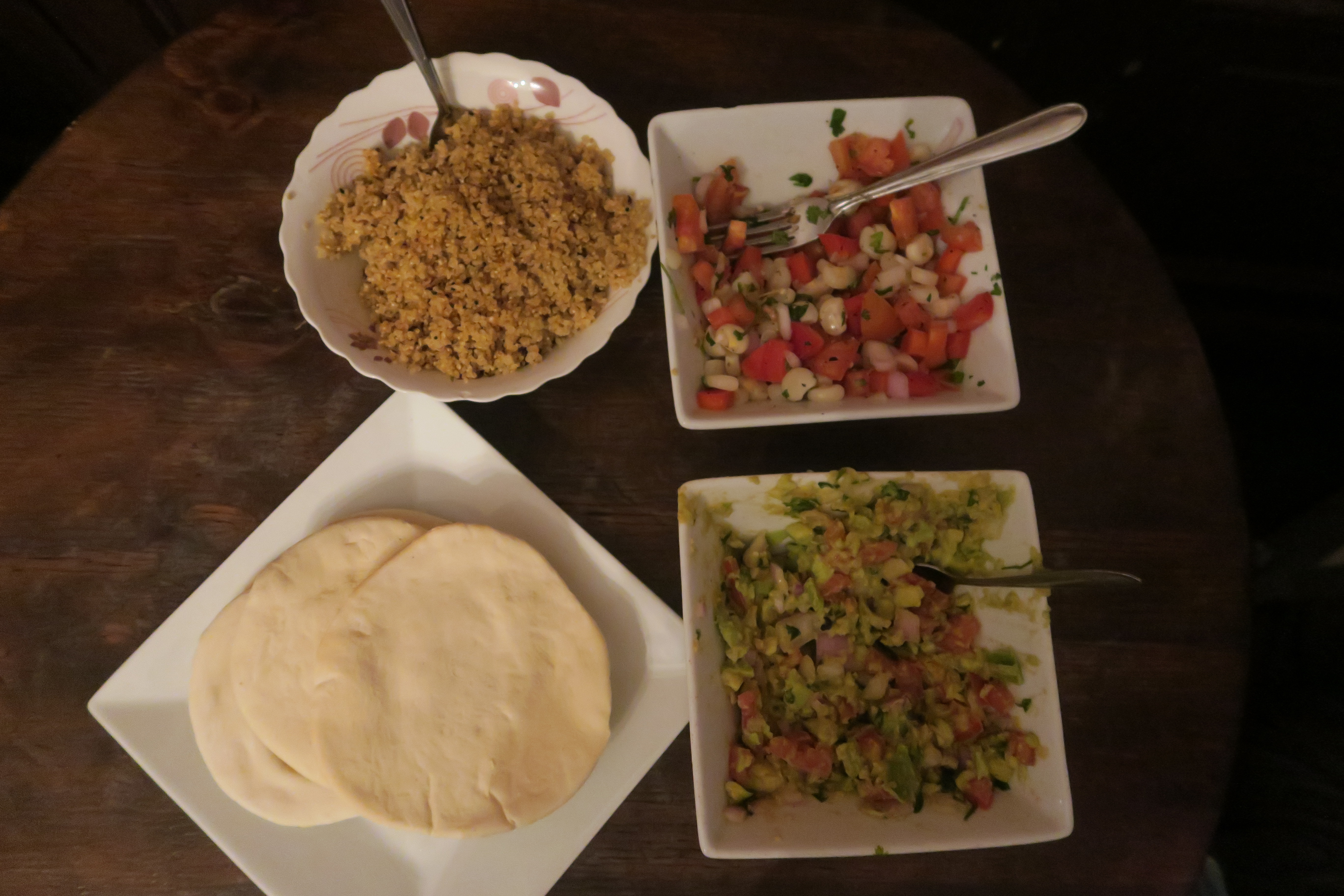 Eating at Home/Hostel
A lot of what can be said about eating at home was said in my bit about the markets. If you can make it all the way to the fresh markets every day to buy your produce, eating at home is going to be cheaper than dining out. If not, then it depends entirely on what you aim to make. Groceries are generally pretty cheap in Peru, but when you remember the very important detail of always having to buy big bottles of water to wash your food with and drink, and add on that some “cheap staples” like pasta sauce can be imported, and therefore one of the most expensive food items in the store, it can get to be a little bit up there when shopping. There also isn’t much out in the typical grocery stores in the way of specifically vegan foods. We found no meat replacements, no vegan cheese, no veggie burgers, no free-from goodies, and only one brand of vegan soya milk, in the super-market near us. We did find one glistening gem in that super-market, though. An accidentally vegan chocolate bar made by Mont Blanc, a Peruvian chocolate company. This chocolate is unlike any chocolate- vegan or otherwise- I’ve ever had. The great big bar is a little on the pricey side for chocolate and disappears just as quickly as any other size, so I would stick to the wee one if you’re on a budget.

Who knows, maybe New Zealand will have the next thing on my favourites list.

Until then,
Ellie Lebo