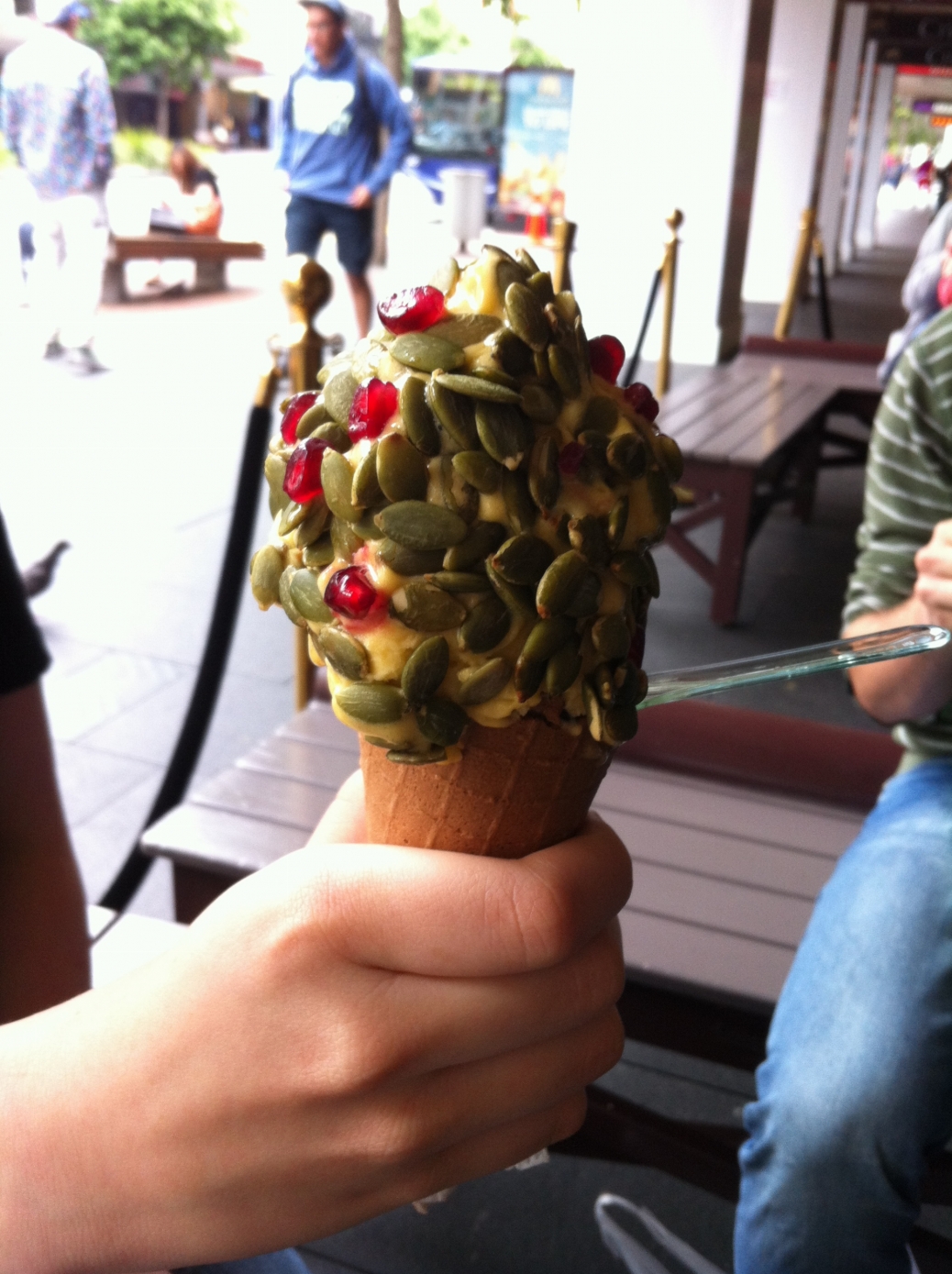 We are in New Zealand! While I am incredibly excited about being in New Zealand, I’ve got to tell you- I don’t feel like I’m in New Zealand just yet. In Peru, we struggled to get through conversations with local people, embarrassed and feeling a little bit left out because we didn’t speak quite enough Spanish. We found it a little bit difficult at times to dicern what products in the grocery store were and were not vegan. It was exciting that by day four, I could easily walk up to someone working there, apologise for my lack of Spanish skills, and ask them about whether or not an ingredient was “vegetariano- sin huevos, sin leche, sin queso, sin carne, sin miel, etc.” but you do lose quite a bit of independence and a lot of speed when you have to shop like that. In Peru, crossing the street was a bit of a nightmare, but it meant that you got to be a part of the crowd. It meant that you got to buy a big glass of coconut water for a sole or a sole or a sole and a half depending on who you asked and how much you could reason with the seller. 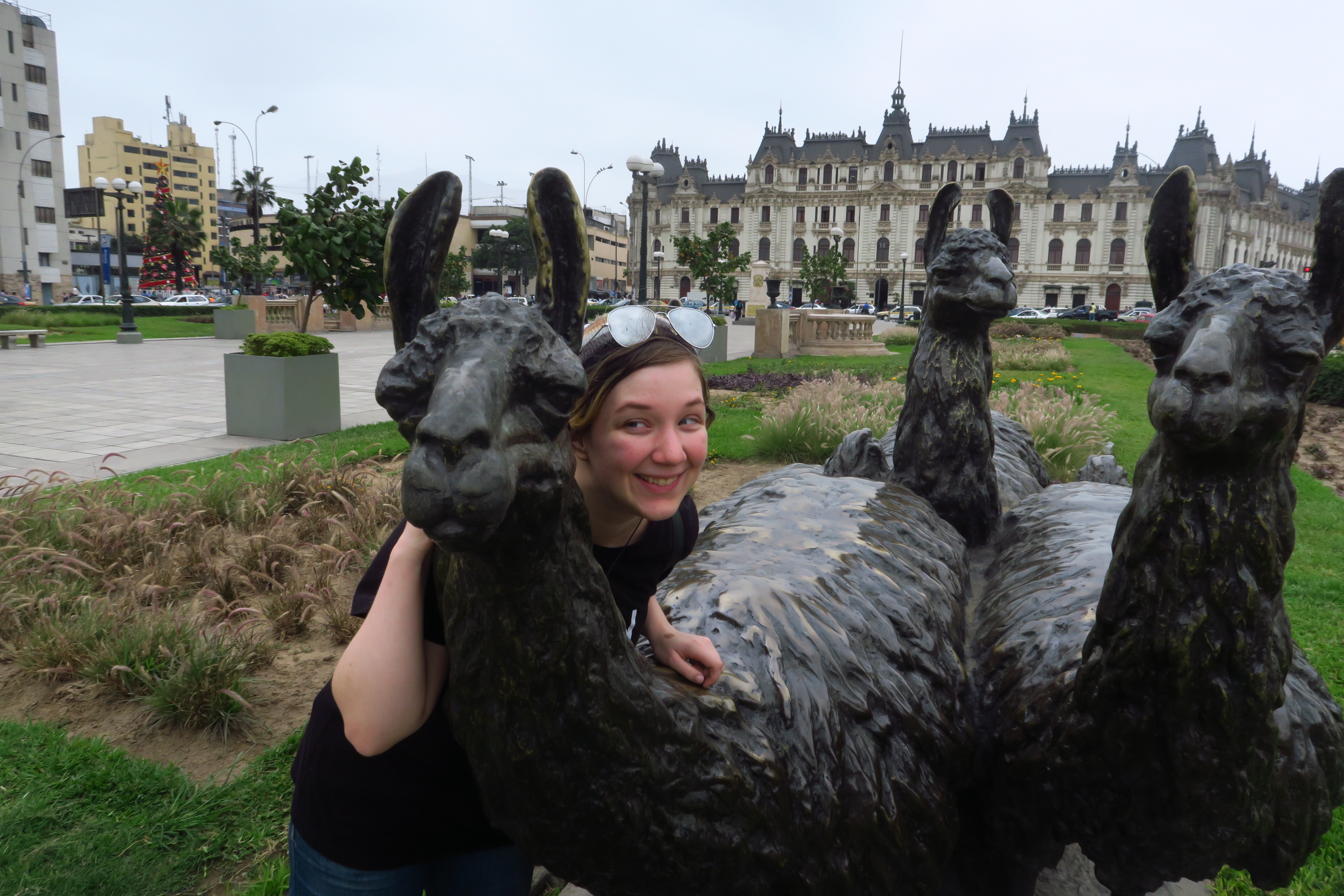 Peru was super different from anywhere else I had ever been. Because of that, New Zealand feels a bit odd. Of course, I am not saying that this is a bad thing at all. It’s just different to what I’ve been experiencing for a while now. I miss how different Peru is from the U.S. and the U.K., but there’s also a bit of a note of comfort in being back where we can read the labels on things without struggle and where people generally know what the heck a vegan is. Having not really seen a whole lot more than the downtown area of Auckland so far, I really feel like I could just be back in the U.K. right now. Everything is so familiar- the brands are mostly British (we even found cans of Irn Bru, a famous Scottish drink that I love dearly, in the local grocery story!), the restaurants are mostly chains with which I am familiar, and the TVs that play in the background while I’m trying to write a cohesive blog are all shows that I know well and am trying very hard not to watch. 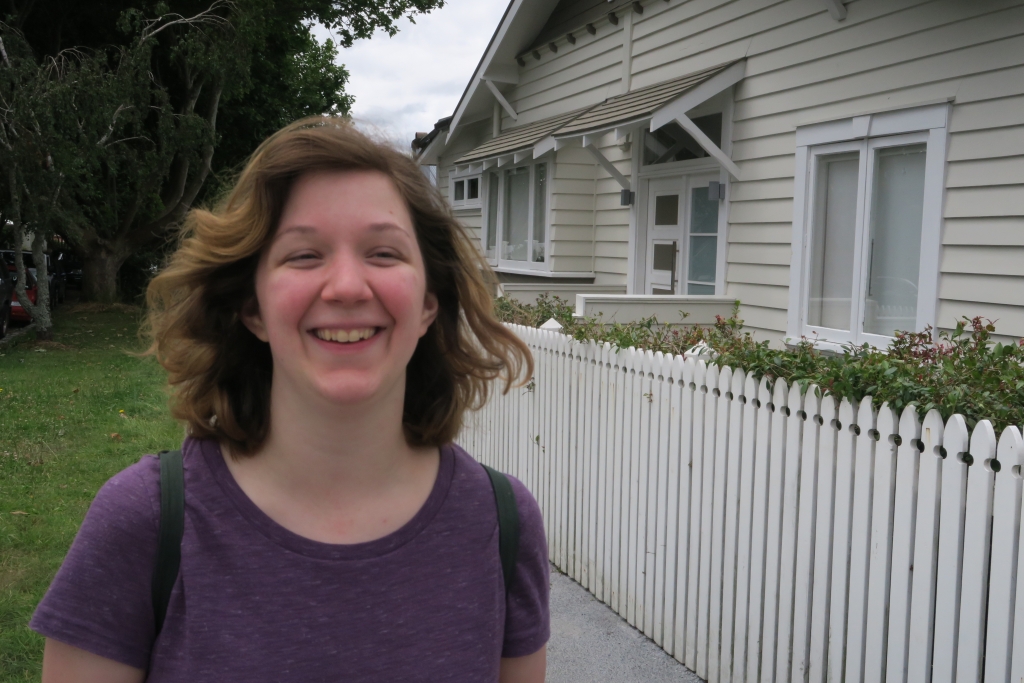 Maybe when we get out of Auckland in a few days and see some of the beautiful scenery that the North Island has to offer, I’ll feel a little less like I’m in Britain. That’s not to say I’m not having fun in Auckland. I am! We went to LUSH, a popular handmade cosmetics store, the other day, which is always a good time. We spent a long time just walking around the store, smelling things and wishing that we had an unlimited LUSH budget, as I’m sure many vegans before us have wished. In the end, we remembered that we were only there to stock back up on all our portable hair-goods. Before we left for our big trip, some good vegan friends of ours suggested that we go to LUSH and buy shampoo bars. 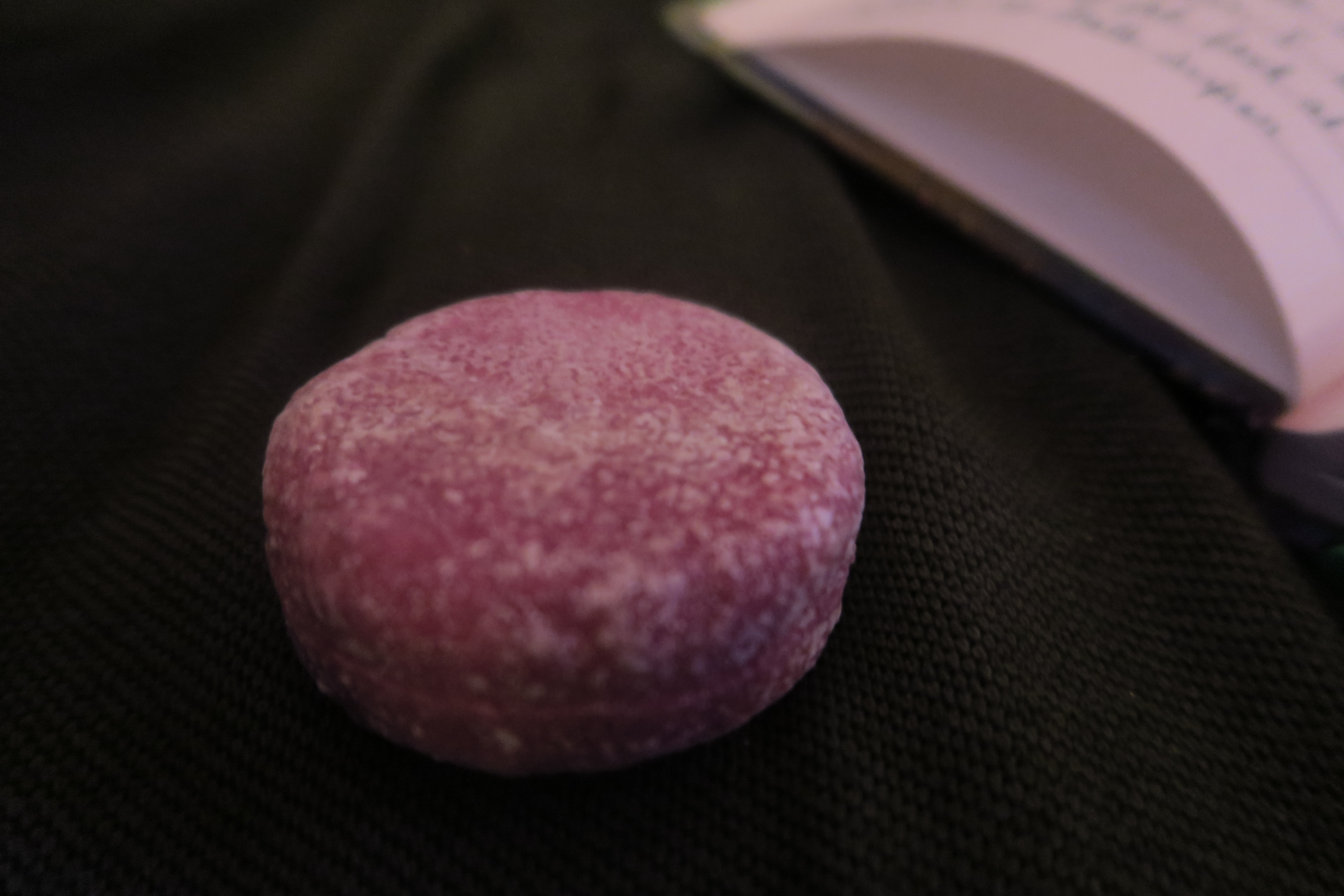 We weren’t really sure about it at first, because we’d never heard of shampoo bars or used them before and Ross and I both have quite specific hair types that don’t do well with just any old shampoo. But our good friends were really emphatic about how convenient and wonderful they were, so we caved and bought some. I am so glad that we did. It has been well worth the trip to LUSH, and the little bit extra that you pay for it. Shampoo bars are great because they’re work really well, smell wonderful, are so small, and they don’t count against you on the liquid limit on aeroplanes. We’ve not had to check our bags even once yet! Anyway, like all things, the shampoo bars do eventually come to an end and we had to go back to LUSH.
While there, we ran into a really enthusiastic vegan who was very excited by my VeganTravel t-shirt and stood chatting with us for quite a while. She offered to write us a list of places in Auckland that she frequents and we happily accepted. Since our lovely meeting, we have tried out three of the places on her list. She has really good taste. The first place on the list we visited was a place called Giapo. They do really really fancy ice cream. I’m not even kidding. Some of it is “gold” dipped. Part of their quirky appeal is that you’re not allowed to look at any of the ice cream before ordering it. You are meant to choose your ice cream based on flavour alone. The day we visited, there were four vegan flavours available. All of them were incredible. In the end, I went for a super earthy and fruity garden sorbet. It was the smoothest sorbet I’ve ever had. Before it came out, I was a little bit uncomfortable with how expensive the ice cream was, but then I saw it. Each ice cream is presented beautifully. Mine came out covered in pumpkin and pomegranate seeds. It was so lovely. Others came out dipped in gold, dusted with cocoa powder, bearing a big candy-made seal, etc, etc. They were all almost too beautiful to eat. Almost… 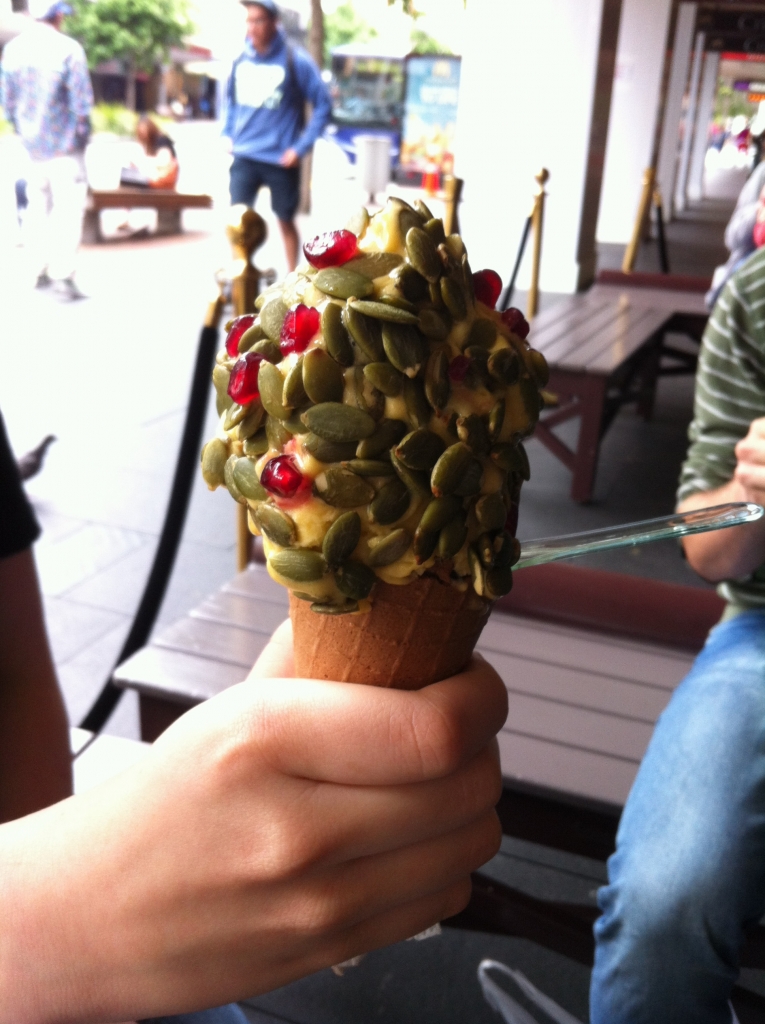 We visited two other places on the list that the really nice vegan gave to us. Neither of the other ones were entirely vegan either, but the options that they provided were really really good. (Look forward to a video and some reviews soon!) I’m wondering now if there just aren’t very many fully vegan places in Auckland and if that’s why the places frequented by Auckland-vegans are omni places. We’re leaving Auckland soon, to go see the hills and forests that I think will make us feel like we are actually in New Zealand, so I’ll have to continue to research this when we come back through in a bit.

Until next time!
Ellie Lebo