Farewell to the North! 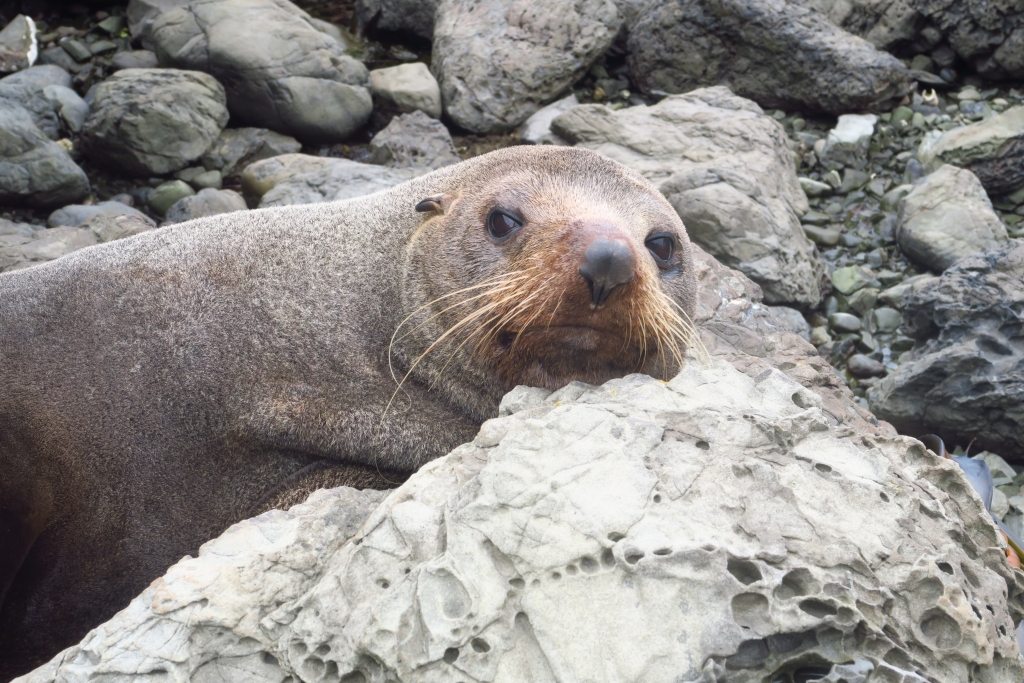 Our time in the north had come to pass. Tired and intrepid, we stuffed our belongings back into our backpacks, said our goodbyes to our friend. It had been a pleasant few days in the comfort of the home of someone we know and love. But it was time to move on! To greener and more mountainous pastures! We had to leave an hour early to encompass the long walk to the train station – there is a shuttle to the ferry terminal from there. After our hour long walk in the sun, we found that we had just missed the shuttle. No big deal, we were then told that the terminal was a twenty-thirty minute walk away. We mustered our enthusiasm and went off on our slightly extended walk, excited by the prospect of the south island! We got to the ferry terminal and were told that they were no longer letting people on. I pointed out that we were twenty minutes early, and was told that you have to be there forty-five minutes before departure. There was no way round it, we were to be stinkin’ landlubbers tonight. Fortunately they were able to change our booking to the next day, and with heavy hearts and heavier backpacks, we began on the hour and a half walk back to our friend’s house, despondently munching on the tofu and falafel sandwiches we had prepared for being on the water.

So, after a Home Alone 1-2 session and another day of breakfast pancakes. We, still tired and intrepid, set out slightly earlier to catch this ferry! Our friend came with us on the walk this time, so when we got to the shuttle we said our goodbyes for a second time and went on our way, half expecting for there to have been a problem with the re-scheduling and that we’d be coming back his way soon enough. This wasn’t the case, however, and we got onto the boat for what was to be the most beautiful nautical experience of my life. I love being on the water. Just being docked and looking over the water with Wellington beside us was beautiful enough that I was incredibly excited for this. We’d heard tale of dolphins occasionally coming to to the side of the boat, so I stayed outside, in my shorts and t-shirt past the sun setting and the heat fading away to be replaced with surprisingly cold temperatures, hoping to see this happen. Sadly it wasn’t the case. This did not impair my enjoyment of the sail in any way, however. Because when the scenery is as beautiful as New Zealand scenery, it’s pretty difficult not to forget any expectations and just look in total awe as it passes by. 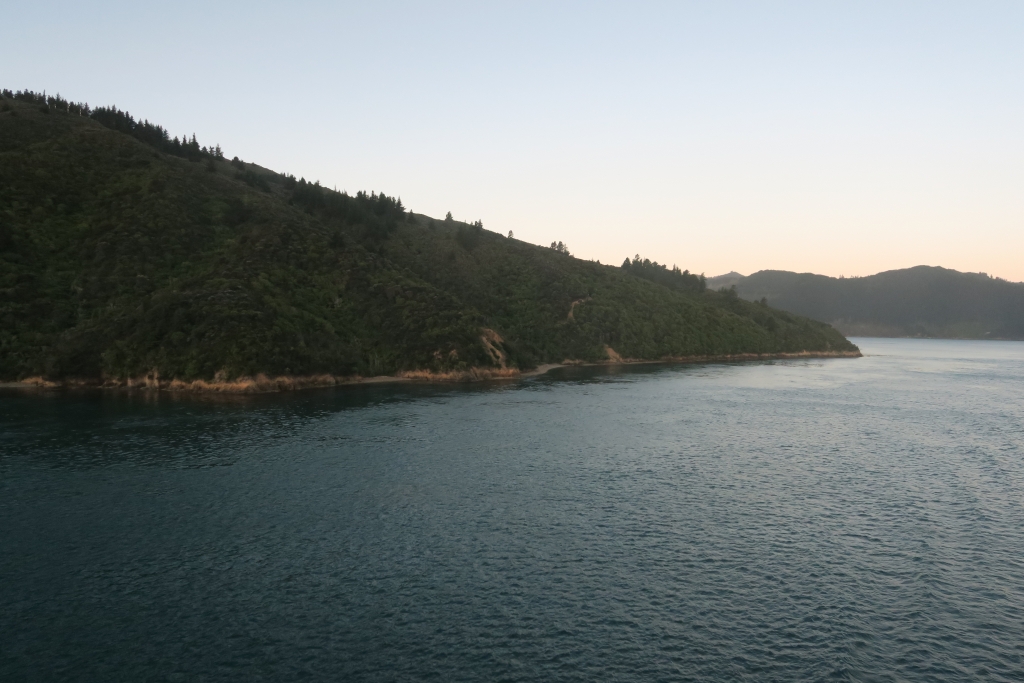 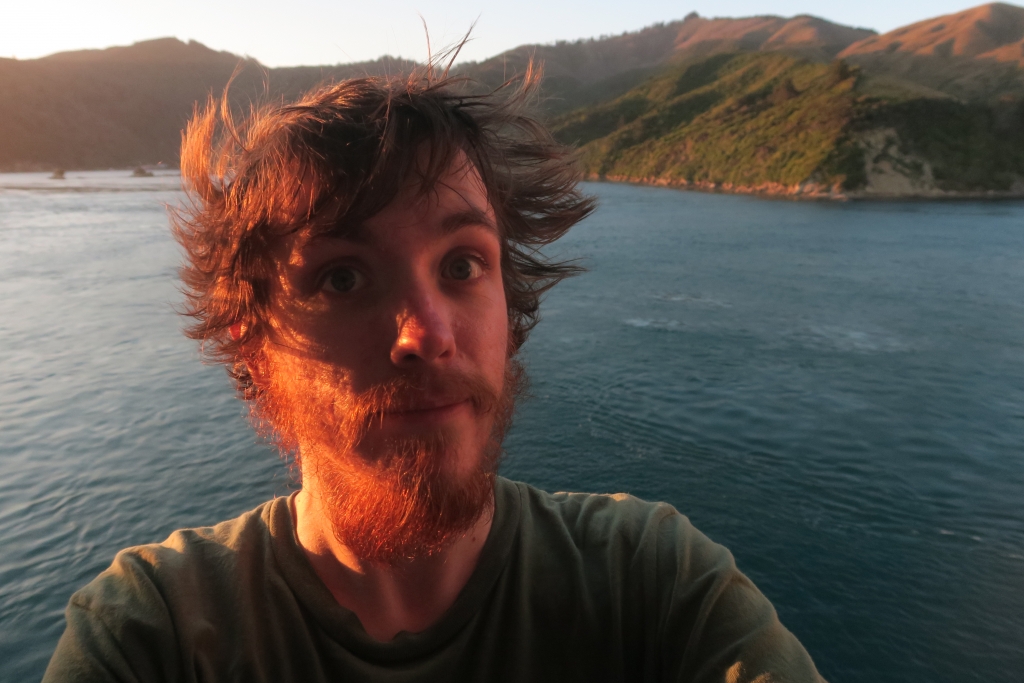 Crossing the islands can be a bit expensive – we have since heard stories of people swimming it or building rafts to get them across – but if you enjoy being on the water it isn’t such a bad thing. I would suggest that you bring your own food if possible, because it is a three hour ride and there isn’t much in the way of vegan options on board. Also it’s nice to be eating something good while you are feeling the ocean breeze and seeing the beautiful scenery go by.

When the ferry docked it was dark. We were walking around Picton to our hostel vaguely seeing the shapes of the hills around us and speculating that they would be incredibly beautiful. Our hostel was not a far walk from the ferry terminal, and check-in was busy! We looked at a few places in Picton that were sold out. I guess it’s pretty common for people to stay here right after coming off the ferry. We got a few hours of sleep there, ate our vegetable pots that we’d prepared, and we were back on the road! The plan was to make it to Christchurch today, a four and a half hour drive away. We headed to a good spot to hitch from, and confirmed that the hills we could see in the darkness were indeed very beautiful. 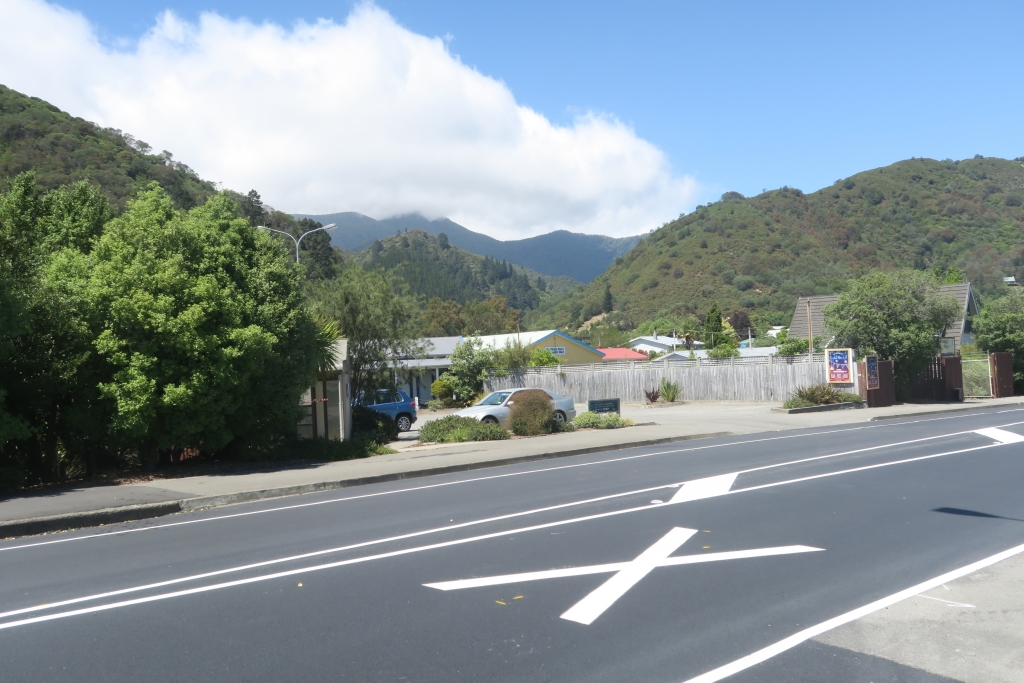 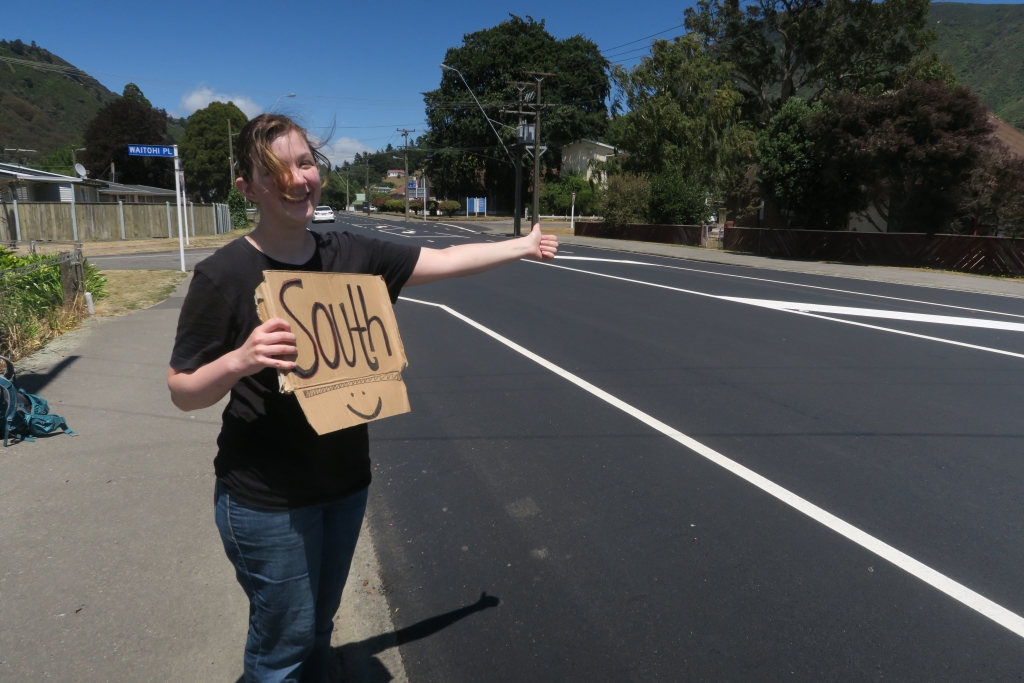 We got to our hitching spot and we were picked up in ten minutes. A couple visiting from Germany who were heading to Kaikoura to do some whale watching offered to take us about halfway. On the way down the four of us woed about not seeing any dolphins on the ferry, and Ellie and I woed that we would love to see some whales. After about an hour or so, our hitching hosts pulled over to stretch their legs and switch roles as driver. We got out on the coast and went exploring around the rocks for a bit. I was walking behind Ellie when she suddenly leapt back in surprise. I looked forward to see what had happened and right in front of us, camouflaged among the rocks, was a seal. We could see a few more in the distance, lying around on the rocks, basking in the sun. I’d never seen a seal before and this was very exciting. We spent a few minutes here just observing them, before moving on with our journey. 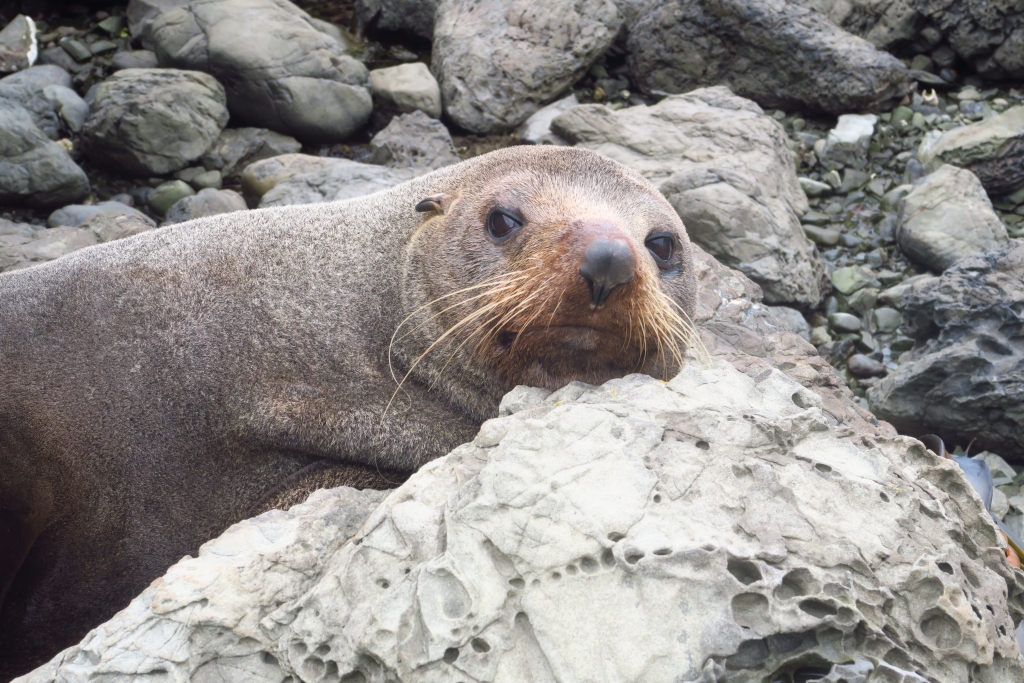 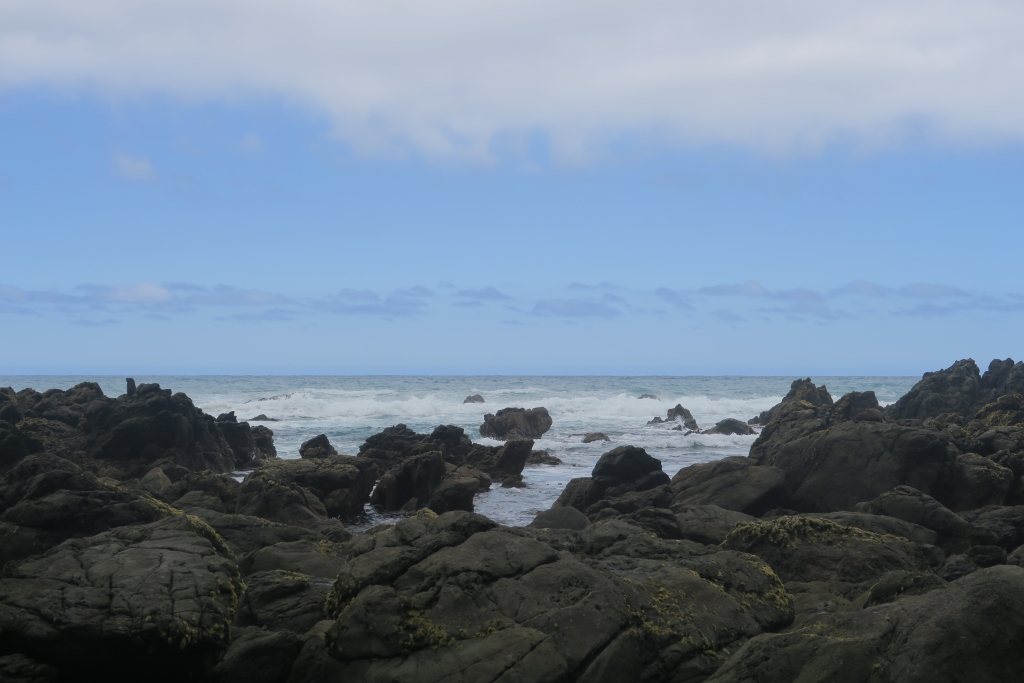 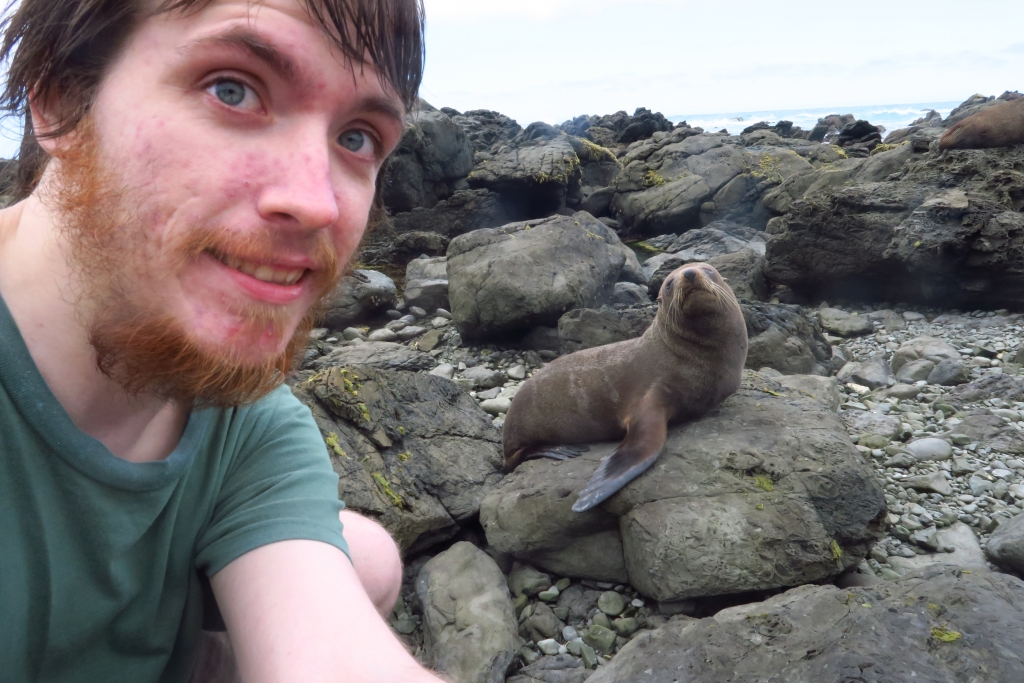 We went a further hour down the road before being dropped off. We went into a small roadside cafe to refill our water bottle and ask where the best place to stand to hitch a ride to Christchurch would be. We stood just a few minutes down from the cafe. There was more at stake now. If we didn’t get picked up we weren’t entirely sure where we were. Fortunately New Zealand friendliness only have us about five minutes to contemplate this before we were picked up by someone going down to Christchurch. We had a lovely drive, getting to know the driver, taking in the beautiful scenery, and of course, stopping for tortilla chips and houmous. 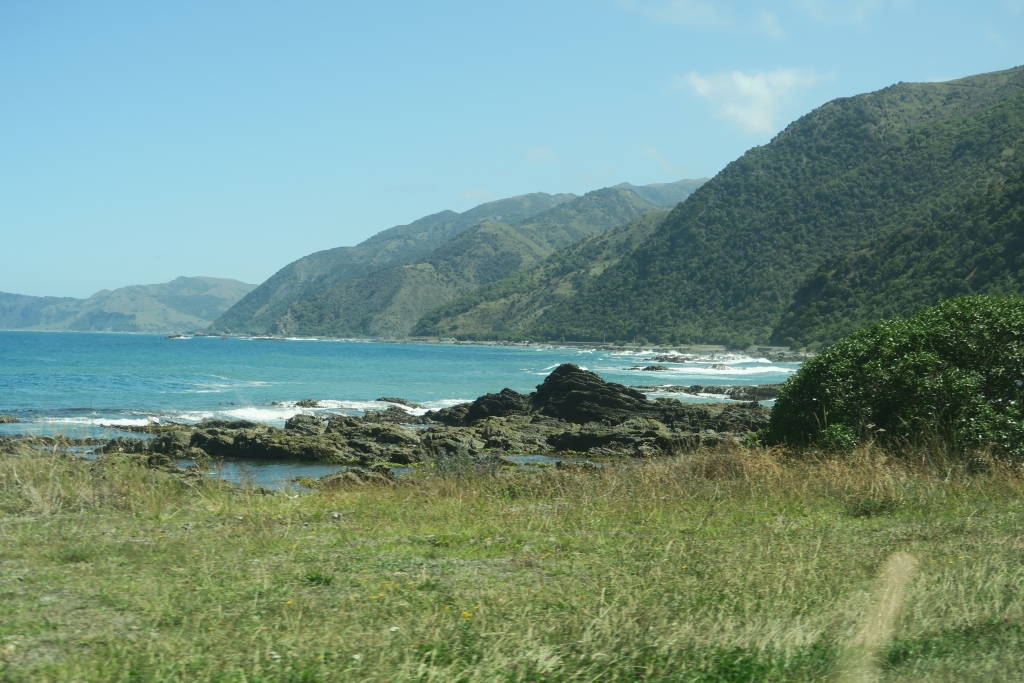 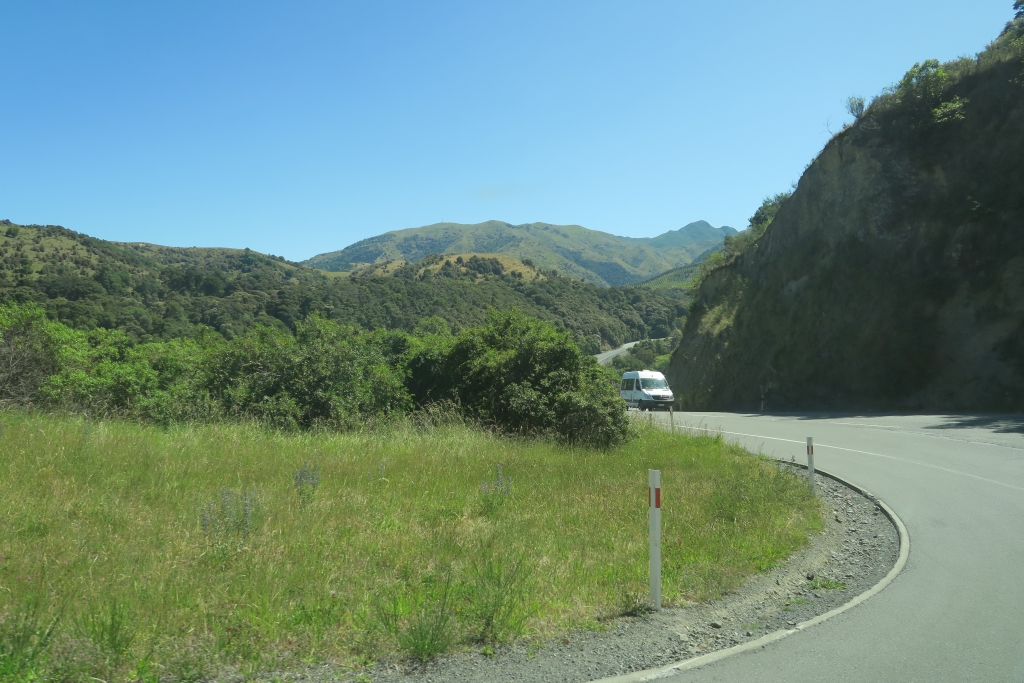 We managed to meet our target for the day and get to Christchurch. We stayed here for only one night. We were couchsurfing with a lovely, kind host, who made sure we had lots of tasty food in our bellies after our travels, and offered us use of his kitchen. I stuck by my philosophy of ‘when in doubt, make guacamole’. We ate guacamole and played music together until we went to bed, sleeping much later than we intended, unaware of the amount of sleep our bodies needed. It was a great day.

The day after, we didn’t have any time to explore Christchurch. We had to make it down to Dunedin for New Year’s Eve, so it was a quick trip to the library – our host hadn’t had internet reinstalled since the large earthquake in the city – and we were back on the road, with our faithful South sign and our thumbs in the air. This took a bit longer than the previous day, stretching over four car journeys instead of two, some of them ending in the middle of farmland with ominous rainclouds approaching. However, we have been finding it increasingly easy to hitch the further south we get, and I was unshaken by this. And sure enough, we got to Dunedin. Tired, hungry, and excited to spend the New Year in the furthest city from home I can possibly get to.