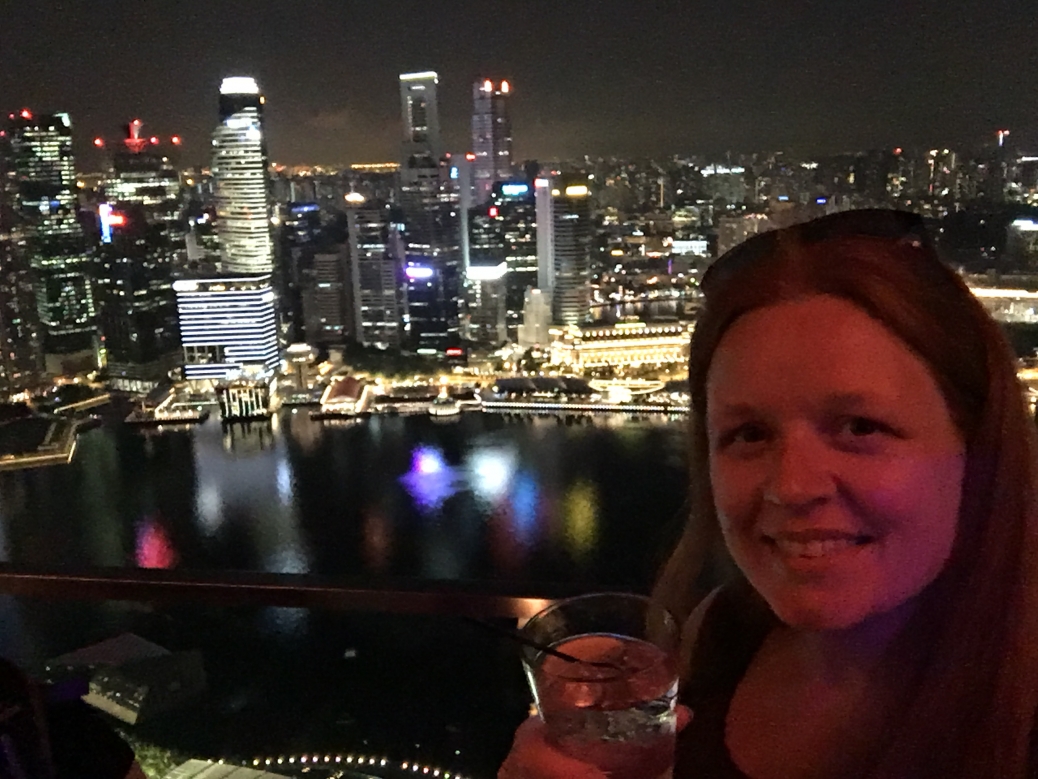 I’ll admit that when I was planning to spend a few days in Singapore, I was not expecting to find a lot of vegan options. I had done some research and there were a few nice restaurants that kept popping up, but I didn’t get the sense that options were readily available throughout the city. Luckily, I was wrong!

This post is mostly focused on the food (yum, yum); if you want to know more about the rest of my time in Singapore, visit my blog.

On the first day I arrived, I checked in to my hostel in Chinatown and went for a walk around the city. The Marina Bay area is a lovely area to walk around, even though there was a bit of a drizzle trying to rain on my parade. As I was circling back towards my hostel I walked through an outdoor mall area.  It was a few blocks between Church St and Cross St, just north of Telok Ayer metro station. I first walked past a burger place called Bergs and saw on their menu that they had both a tofu and a falafel patty for their veggie burgers. It sounded interesting, but I wasn’t really in the mood for a burger, so I continued on.

Shortly after, I came across a place called Fill-a-Pita. Sadly they only accepted cash and I hadn’t had a chance to find a bank machine yet 🙁 So I ended up heading back to my hostel with an empty stomach… I was exhausted! On my walk back, I did pass a few more places in the mall that looked promising, but didn’t investigate any of them.

After falling into my bunk and having a power nap, I woke up pretty hungry. I took to my phone and typed in “vegan” into google maps: there was a cafe less than a block from my hostel. Since it was so close I figured that if it didn’t work I could come back and regroup. It was exactly what I was looking for! It’s a cafe called Well Dressed Salad, which also has a full restaurant on the floor above. The downstairs cafe is pretty average looking, with simple tables and chairs and a few display cases for the salad ingredients and desserts (yum!). The upstairs restaurant seemed to be a bit fancier, and more expensive.  Both locations are run by the same owners.

I took a seat at a table in the cafe and looked at the menu.  I realized that a few of the items did contain egg and there was no labeling of vegan vs vegetarian items.  Being concerned, I double checked with the staff that the meal I wanted to get was actually vegan and she explained that only a few items weren’t vegan. They have a range of menu items, including all day breakfast, salads, soups, wraps, and some yummy looking desserts! I ended up going back a few days later for a brownie and it was delicious. But for this meal, I went with the Soya Curry Up! bowl: veggies in a spicy broth served with twirly tortilla chips and rice. It came out quite quickly and hit the spot! The broth was just a touch spicy, which was surprising since it didn’t look like it would be.  I thought it was almost too spicy but after I had a few more bites and got used to it.  Turns out it was just the right amount of spice. 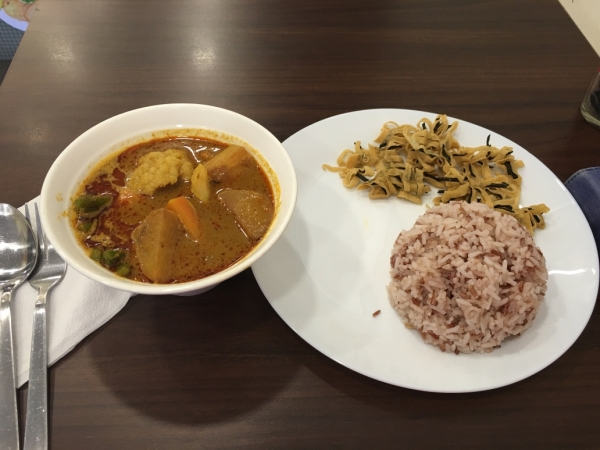 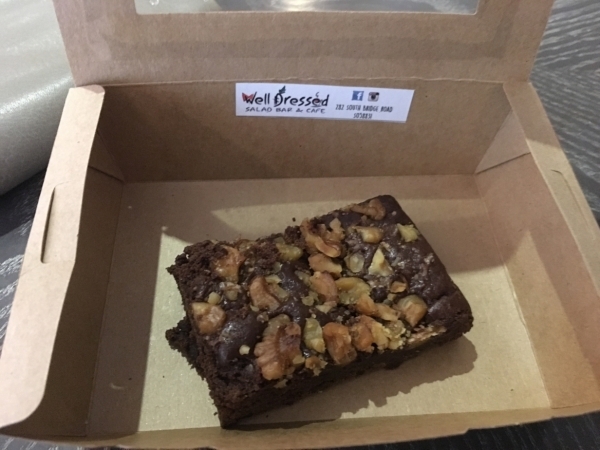 the yummy brownie I went back for.

After finishing my meal I tried to meet up with a couchsurfer for drinks, but we missed each other due to lack of wi-fi. I ended up grabbing a quick drink at Starbucks instead (it’s a weakness) and then headed home for a well deserved sleep.

The next day started with a quick trip to Little India and a nice walk around MacRitchie Reservoir.  Little India seemed like the place to be for vegan food; I passed at lease 4 cafes with signs.  Sadly, I was too early for most of them to be open.  The reservoir and park is towards the centre of Singapore.  It was a bit on the warm side, but still quite nice to get out and see some nature in the city.  After getting back to the downtown area just after 2pm, most of the cafes were closing and I decided to try the pita place I had walked by the day before. Most places seemed to close for lunch about 2:30, so check opening times!  Individual restaurants vary, but if you wait too long you’ll be quite limited in food options.

The pita place was open until 3, which worked well for me. The place is entirely veggie, with quite a few vegan options noted on the menu. All of their sides and about half of their entrees are vegan. I chose the falafel pita, which also had veggies and hummus inside. After a few minutes I got the pita and though it looked a bit on the small side, but was delicious and quite filling despite the size. There was a small seating area in the cafe, so I sat down to enjoy the pita. As I was getting ready to leave, the owner came over and offered me a date for dessert; the perfect sweetness to end the meal. 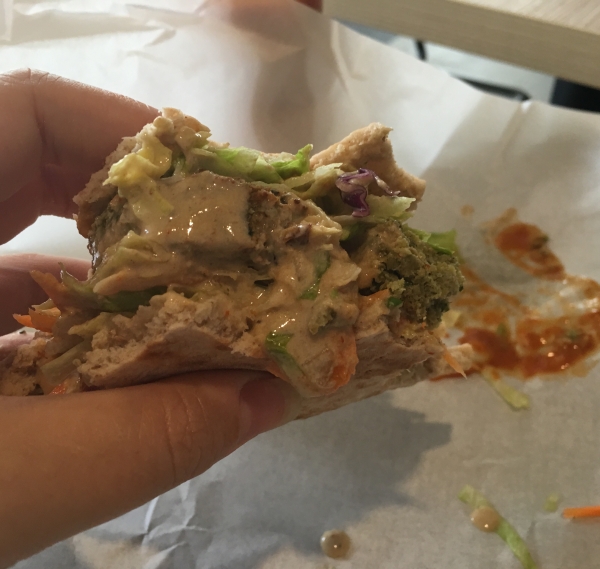 I went back to my hostel and got in touch with my couchsurfer friend and we headed out for drinks at Clarke Quay. There are a bunch of restaurants at Clarke Quay, but we ended up heading to a bar for a few drinks and didn’t get the chance to explore the restaurants. After drinks, I was getting a bit peckish and Google told me there was a place called nomVnom nearby… it’s vegan and it has nom in the name? I’m game!

We went off in search of the restaurant and it was a bit hard to find, but eventually, after heading into the depths of the mall to the basement level, we found the food court. NomVnom is a burger stand towards the middle of the food court area. They have quite a large selection and I ended up asking for a suggestion since I couldn’t make up my mind!  After taking into account the staff recommendations, I tried the tempeh burger and some fried potato balls… and nom was right!  In fact, it was so yummy I had to eat quite a bit of it before I remembered to take a photo… oops!  And with that filling meal, I ended up heading home to end day 2. 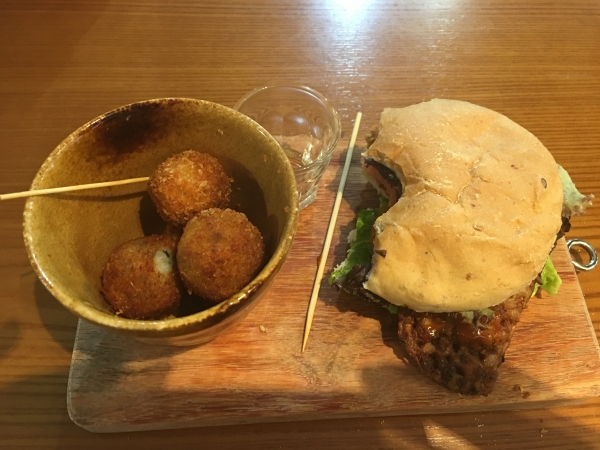 Day 3, and my last full day in Singapore, started off with a switch of accommodations, which I didn’t mind. The breakfast ended up being some fruit and dry cornflakes at my first hostel because everything seemed to contain milk products 🙁  I moved from Chinatown to near Bugis and I checked into The Pod hotel, right on the bus line. Since I was early I was able to check out the breakfast spread and there were more vegan options this time around!  I had checked on Google (sensing a theme?) and there were a few options in this area, so I went walking and kept an eye out.

Walking around my new hotel gave me a sense of the area. I passed a small build-your-own salad shop, which had a few vegan options.  It would have been a great place to stop, but I carried on towards the bigger shopping area. Unfortunately, there were lots of vegetarian restaurants, but when I asked if they had vegan options, I got a lot of blank looks, so I moved on.

I ended up randomly wandering in to one of the ground floors of a building that had a lot of restaurants. Hidden in the back corner was a place with “vegan” on the sign called HotCakes.  It looked like they mostly did baking and didn’t have a lot of varied options for lunch (all veggie, but the vegan ones weren’t labeled) but it was cheap! I ended up ordering some pasta with veggies and olive oil with tea, all for under $7!  And it was as good as it looks!  Totally hit the spot and filled me up for my adventure to the botanical gardens. 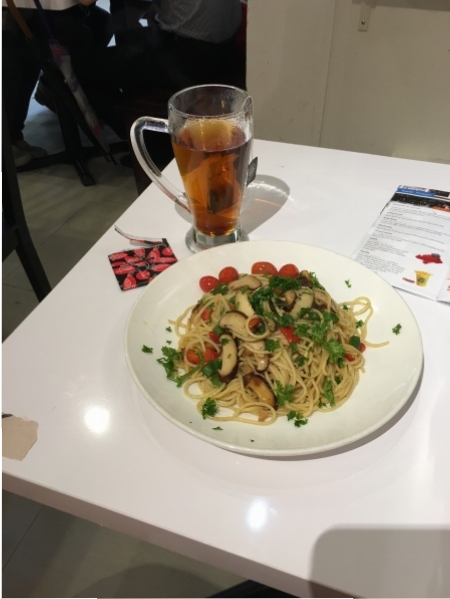 After a relaxing afternoon I went back to Clarke Quay to meet up with my couchsurfing friend… But first I stopped in for dinner at Real Food.  I think they have a few locations in Singapore and Malaysia, but this one was also on the basement level of the mall.  Coincidentally, just around the corner from nomVnom.  The selection of food was pretty good, but it was definitely on the expensive side.  I ordered a falafel burger with a side of potato salad and some fried dumplings for just under $30. Actually, I didn’t order the dumplings, I was trying to order the spring rolls, but I guess they misheard me…it all worked out in the end.  It appeared that there was a little bit of everything going on: cafe, grocery, community space. The space was neat, but again, it’s definitely on the pricier side.  It turns out they charged $0.50 for a tiny glass of tap water? Ummmmm no thanks.  I get that there’s some labour involved in washing the glass, but at least make them reasonable sized glasses!  When the food finally arrived it was pretty good, and I probably would eat there a lot if it was a bit less expensive.  I really enjoyed the quality of the ingredients,  but I had to eat quickly as I was late to meet up with my friend. 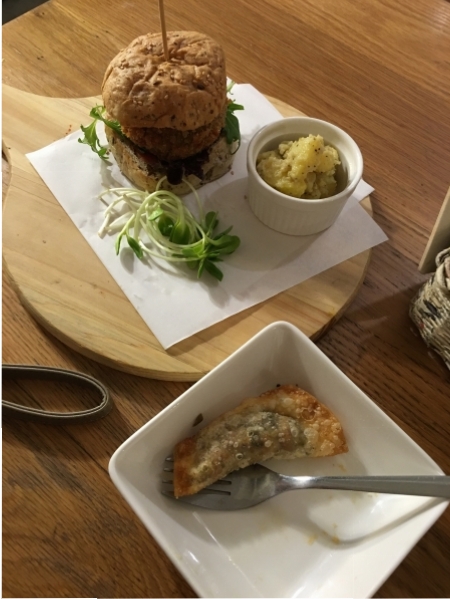 Burger, potato salad, and what was left of the dumplings 😉

Ladies Night to finish it off

It was Wednesday night, which is generally ladies night at most places in Singapore. To take advantage, we ended up heading to the top of the Marina Bay Sands hotel and enjoyed the nice view and free drink 🙂  Next time I go to Singapore, I will try to stop off at a few of the restaurants I read about, but it’s good to know I won’t go hungry!

I’ll leave you with a few more tips about travelling in Singapore:

And with that, it was off to my next stop, Melaka!  Cheers! 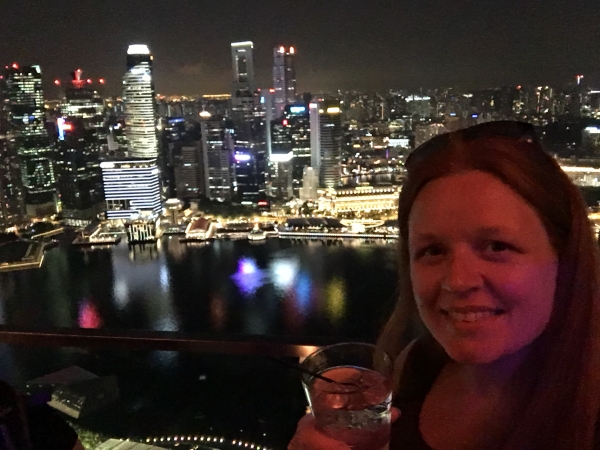 view from the top of Marina Bay Sands… complete with free drink!