A bit of Taiwan’s hiking trails 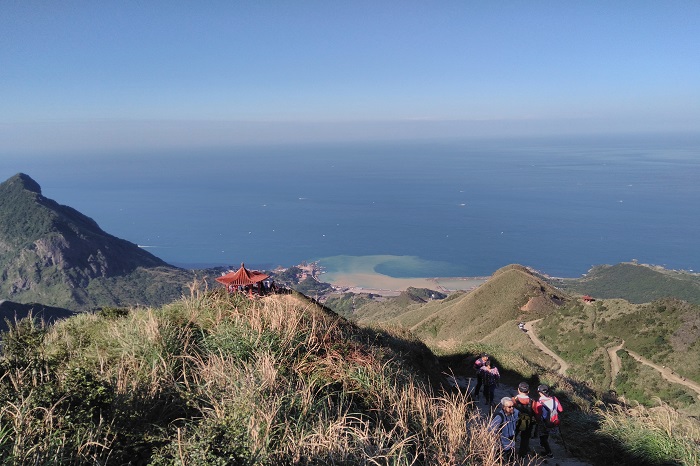 I was probably the youngest on the bus. Around me were local seniors in their late 50s and above. But we all headed to one place: mountains.

Taiwan might be thought as a country filled mostly with electronic factories, but in fact, as much as 70% of the island’s landmass is occupied by mountains and it even has the second highest mountain range in East Asia, making it a heaven for adventure-hungry hikers.

During my 12-day trip to Taiwan, I only covered Taipei, Changhua, Chiayi and Taichung, but most of the time I was up to the mountains.

Variety of trails to experience

As a mountainous nation, hiking opportunities are everywhere in Taiwan, even in big cities like Taipei. Hiking routes vary in lengths and difficult levels, ranging from gentle walks to extreme treks, but most of them are well-organised.

Chen, a 58 year old Taipei resident I met on the bus, said she often hikes at least once a week with her husband to the mountainous neighbourhood of their house. They also travel to further places in Taipei to hike, one of which being Yangmingshan National Park in the northern part of the city.

Qingtiangang Grassland is among the most popular spots there due to its lovely landscape of volcanic rocks and green plains. But according to Chen, the secret of this area lies at its back with a circular hiking route and a sea of high reeds.

The adventurist in me could not skip that suggestion, apparently.  True that, I was pleased to see the gorgeous view, but was even more into the trails leading to other parts of the park.

When I asked about more challenging routes, Chen suggested checking out Teapot Mountain. It is in New Taipei City but only one and a half hour from Taipei by bus and can even be done in a day trip that includes the infamous old town Jiufen.

Teapot trails start off steeply and continue also steeply. You will have to get your hands dirty on some parts of the trail, especially when climbing scrambling rocks into a cave on top of the mountain. Plus, the higher you go, the more exposed to the sun you get, the more likely for you to be steamed, especially in hot days.

On the other hand, the view doesn’t let you down. My jaw literally dropped and my eyes opened wide when I was looking over the picturesque ocean and mountain scenery from the top of the mountain. It is apparently my most favourite hikes on the trip.

When it comes to central Taiwan, Alishan in Chiayi is the most visited spot. However, for those who prefer lesser known places, Shizhuo would be an option. Not until had I stopped at Shizhuo, I did not know this area is home to a plethora of tranquil and rustic trails, such as Mist Trail, Sakura Trail, Sunset Trail and Tea Trail.

They are 1-1.5 km long, interlinked, going through local villages, tea plantations, bamboo forests and natural parks. Interestingly, it is not difficult to spot signs or boards about plants and their benefits along the trails, especially ones in national parks. Hiking here, hikers are able to both enjoy nature and get free lessons on local ecosystem.

Meanwhile, in Taichung, people often hike in Dakeng Scenic Area. Although the place is not far from the downtown and can be reached by bus, I would have not found it without the help of Katie, a local hiker.

Dakeng has 10 man-made wooden trails, ranging from dead flat to near vertical. Trails #1 to #4 are the steepest and longest ones, which are our routes of choice. Despite her age, Katie walked smoothly and briskly, even on the hardest parts. Probably, she is used to these trails, but practice also matters.

She said since hiking has been her favourite activity, she managed to do it on the weekends when she was still working. But now, when already retired, she has more time to dedicate to it. She even hiked Hehuanshan, which is one of the highest mountains in Taiwan, and suggested I do so in my future trip to Taiwan.

It was the first time I have hiked on wooden trails like that. Some parts were slippery but overall, it was a nice experience and even nicer to be accompanied by a hard-core hiker like Katie.

When it’s become a culture

Once an activity has become popular among people, there is always a culture coming along with it and hiking in Taiwan is not an exception.

In other countries, it might be acceptable to set out on a hike in sneakers or shorts. But in Taiwan, mountaineer wear is recommended for even short-hours hikes. I was talking about hiking shoes, sun sleeves, hats, neck guards, hiking sticks and multi-layers outfit. I felt somehow embarrassed with my jeans and shirts while other people were super prepared in their high-end gears.

And hiking in Taiwan is more than just hiking. It is as much about socialising as it is about nature and exercise. Taiwanese often pack their lunch boxes and eat together at some point on the trail. They also share food with each other and with strangers. Someone has said, it is not uncommon to see groups carrying heavy cooking gear and backpacks filled with food all the way to the outlooks and cook for other hikers who will pass on the trails.

Mountains are also the place to strengthen family bonds with parents taking children to the hikes and having good times together, like Chen and Katie’s families and many other families here in Taiwan have been doing.

For more posts, please visit Minh on the move