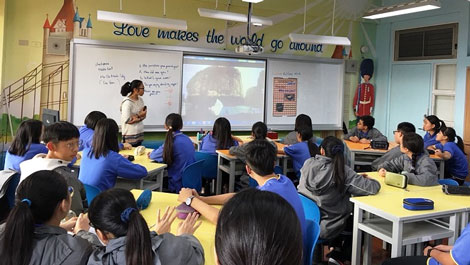 With butterflies in my stomach, I followed Taiwanese teachers to their classrooms where dozens of curious yet excited faces were waiting for me.

I then delivered my presentation about Vietnam and myself with unexpectedly great support and engagement of local students and teachers.

The project was initiated by Yang Zhonghan four years ago when he was working as a security guard at a secondary school in the middle county of Yunlin.

Prior to that, while doing an exchange programme in Europe, he travelled to different countries in the region, using Couchsurfing to stay and meet locals.

“Thanks to Couchsurfing, I met with different people and learnt a lot about local communities through them”, said Han, 28, during our quick meet-up in Taichung before he headed to visit a school.

However, he quickly realised a common situation faced by those countries and his homeland, Taiwan, which is not many people have access to see the outside world, especially rural areas like the place he used to work.

Furthermore, many travellers are more interested in experiencing the true Taiwanese culture than visiting touristic spots, but they do not know how to start. Han, who often hosted Couchsurfers on the weekends besides work, came up with the idea of “Couchsurfers in Class” and started bringing backpackers to the school where he worked with the consent of principal.

The project focuses on rural schools with no foreign teachers and volunteers or international communication plans. It also consists of local families and volunteers who are willing to host foreigners during their visits. With the spirit of Couchsurfing, it is built on mutual trust and respect between travellers and local communities rather than money.

Since its inception, the project has received attention of numbers of schools and families over the country, despite its very few contact channels – the Couchsurfing website, a Facebook Fanpage and a blog page. It now has been expanded to a national scale with participation of 30 book-houses and educational institutions, from elementary to high school levels, across Taiwan and over 150 travellers from 50 countries around the world.

Interestingly, under the project, the visitors are expected to share about their countries, personal stories and anything they want to share instead of teaching,

“It is even more than just sharing. Some results were even out of our expectation”, Han said.

“No matter what nationalities, jobs or stories they have, travellers have brought the world closer to our students and broken down stereotypes about each other and ourselves that we have held”.

“And the guests with their stories have showed the students that there are various choices in life, thus encouraging them to keep exploring their potentials and pursuing their own paths”.

Han recalled the first time the students met in person a Japanese man who was doing an international free-hug campaign.

“Taiwanese barely hug one another in public because it is not our culture”, Han said. “But after several simple yes-no questions by the guest, the students were so happy to hug him, some of them even went for three times”.

Backpackers and teachers can also be beneficial from the project.

Teachers at the schools I visited kept saying “thank you” to me for my presence and my sharing because it has deepened their understanding about Vietnam and motivated them to be resilient with their chosen paths.

For me, I also felt grateful to the teachers without whom I could not prepare my presentation well. Not only did they provide me with the students’ English level, their know-how about Vietnam or classroom situation, but they also collected questions from students and sent them to me beforehand, so that I could choose suitable topics to talk about.

Besides, they hospitably accommodated me and introduced me to local customs, yet challenged me with tough questions about Vietnam. It was such a great occasion for me to learn new things and also to look back and learn more about my own country, from history, society to economy and so on.

“It is impossible for foreigners to know everything about Taiwan because they are outsiders. That’s why local teachers and volunteers are crucial. They will contact backpackers before their arrival to introduce the school situation and discuss the suitable content to share with students”, Han said.

“The project has proved that money should not be the only thing to expect from travellers. Together we can do much more than that”.

To help travellers better find places they wanted to visit, Han created a location map after a one-year trip to schools and families across Taiwan.

Han, who has returned home after a nine-month schools tour in Europe, now eyes a bigger goal. His team and he plan to build an international website for the project.

“Many people in Europe still do not know where Vietnam or Taiwan is. And even we might not know much about them. So why not sharing the concept of “Couchsurfers in Class” to a bigger community?”, Han said.

The platform will allow teachers over the world to mark their schools on the world map. Meanwhile, backpackers can use it to contact with teachers who are interested in inviting foreigners to their schools to communicate with students. They can even upload photos, videos and content of the visits and share with people globally.

“I plan to name the platform “A piece of world”. Hopefully, once it is live, students across the planet will be able to see the world outside their classrooms and different possibilities in life”, Han said.

Saying goodbye to Han, on the bus to the airport, I wondered which country I would go next and which topic I will share with students once the “Couchsurfers in Class” world map is finished.

For more information, visit Minh on the move