Vegan/vegetarian travel in Mongolia – is it possible? 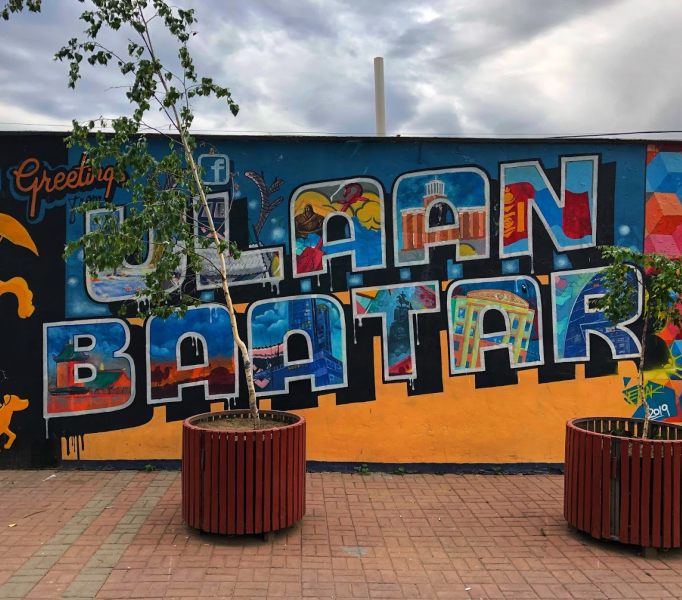 When we hopped onto our train to Ulaanbaatar from Beijing, we didn’t really know what to expect. We’d be traveling around the Gobi desert for about a week, and we definitely weren’t planning on many veggie options – but then again, we weren’t exactly going to Mongolia for the food. In fact, we’d heard tales from other travelers of mutton for breakfast, mutton for lunch, and more mutton for dinner, maybe accompanied by some fermented milk – about as far from vegan as it gets! It was a little concerning. But, as is often the case on trips, we were surprised. Quite surprised, in fact – because there are vegetarian and vegan restaurants in Ulaanbaatar, and we even had no problem eating only plants out in our desert gers. So, if you’re planning a trip to Mongolia but are worried about the food options – don’t worry, it’s fine. Really. And Mongolia is awesome!

So where did we eat? Well, outside of Ulaanbaatar there are very few restaurants, and we didn’t go to any of them. We’ll talk about food in rural Mongolia in a second. But in the city, there are a bunch of places to eat, some of them great! Here are our favorites.

We heard from many people about Veranda – and it is listed as one of the highest-rated restaurants in UB on TripAdvisor. So we went there to try it, and it’s not worth it. Quite expensive (think Europe/US prices), and I’d say the food was less than stellar.

Ok, so there’s vegan/vegetarian food available in Ulaanbaatar. But hopefully, you didn’t go all the way to Mongolia just to stay in the city. We certainly didn’t – after 3 days in UB, we headed out on a trip to the Gobi desert organized through Golden Gobi Hostel. This is where we thought we’d be sunk as far as avoiding meat is concerned, but again we were wrong. Most of the hostel-organized trips into rural Mongolia provide three meals per day, but there’s basically no information available about what those meals will consist of. We’d just have to find out!

Turns out, though, that they were great. Our trip had five people, one driver, and one guide, all crammed (not really, it was pretty spacious) into an old Russian army truck. They seem to drive these trucks probably 80% because tourists think they’re cool and 20% because they can handle bad roads, as all the locals seemed to be driving Priuses… anyway, back to the food. 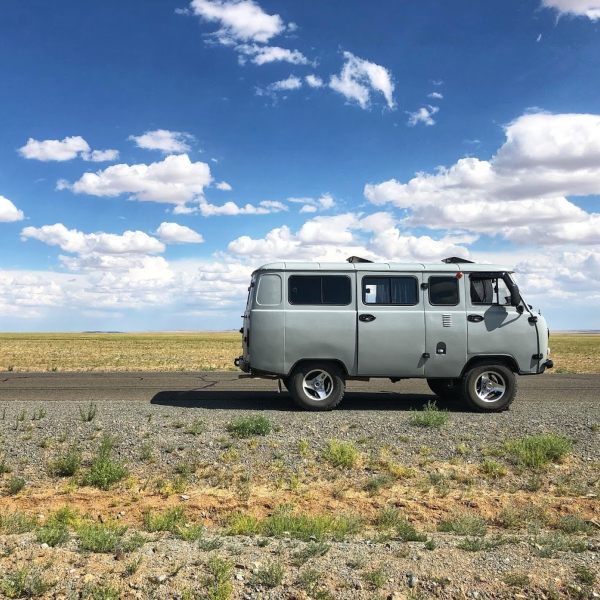 Our beautiful Russian truck out in the Gobi desert

On our trip our guide cooked all of our meals – we never ate with a family, but you might, depending on your trip. I’d imagine there’s not much food choice if you’re lucky enough to stay with a family in their ger! But for us, vegan/vegetarian options were readily available – the hostel even asked us if we ate meat before we left. And as it turned out, 3 out of 5 people on our trip were vegetarians!

We were really shocked by how varied and tasty the food that our guide brought was. She had all the ingredients stuffed into a cooler in the back of the truck, and for basically every meal she would pull out a little stove and cook us hot food. Things like vegetable soup, vegetable pasta, Mongolian pancakes, and… vegetarian sushi! This was extremely unexpected – we thought we’d be picking at mutton! But instead, there we were, sitting outside of our ger in the Gobi desert, eating amazing vegetable rolls. While our meals weren’t strictly vegan, I’m sure they could have made them vegan if we’d asked.

While we only experienced our Golden Gobi tour, I’d imagine the other hostel-run tours are similarly accommodating for vegetarians – although if you stay with families they will probably not understand why you don’t eat meat! The traditional Mongolia diet is extremely meat-heavy, as there is not much choice when you live hundreds of miles from a city and it gets to -40 in the winter.

Overall, Mongolia is much more vegetarian/vegan-friendly than expected. That said, it’s still Mongolia, where most people eat meat most of the time! And at most restaurants (apart from the two great ones we listed above!) there may be “veggie” options, but they will probably not be great and there will also probably be no way to know if it was cooked in a meat broth (read: it probably was). Also, the substitution for meat is usually an egg, so if you don’t eat eggs you’ll be left with a pile of rice and some sauce. So while you may not go to Mongolia for the food, you do go for everything else! We had an amazing time and now want to go back for a month-long trip to see more of the countryside. If you’re thinking of going, DO IT!

Rebecca and Ethan run the blog Traveling with Sunscreen. See more about their adventures in Mongolia here.