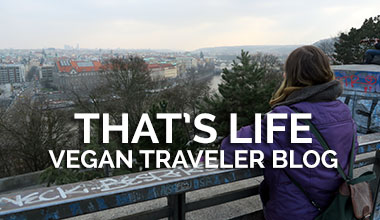 Last Sunday I had my first experience with sitting in a cafe and working like a real live professional! Ross and I were in Prague at the time and needed a good environment in which to write our blogs, book our next accommodations, and send out some couch surf requests. I know that people often go to Starbucks to do that sort of thing but we were looking for a place a little cozier, quieter, cleaner, more vegan, and more ethical. It just so happens that there are several really nice vegan cafes in Prague. We headed into Secret of Raw, each of the three of us with a big task to accomplish. We asked the person behind the counter if it was okay for us to sit in and work for a bit. They said it was alright and were even so kind as to take us through to a bigger table in the back so we could have some peace, quiet, and space. We ordered ourselves some beautiful snacks and drinks and set ourselves to work. 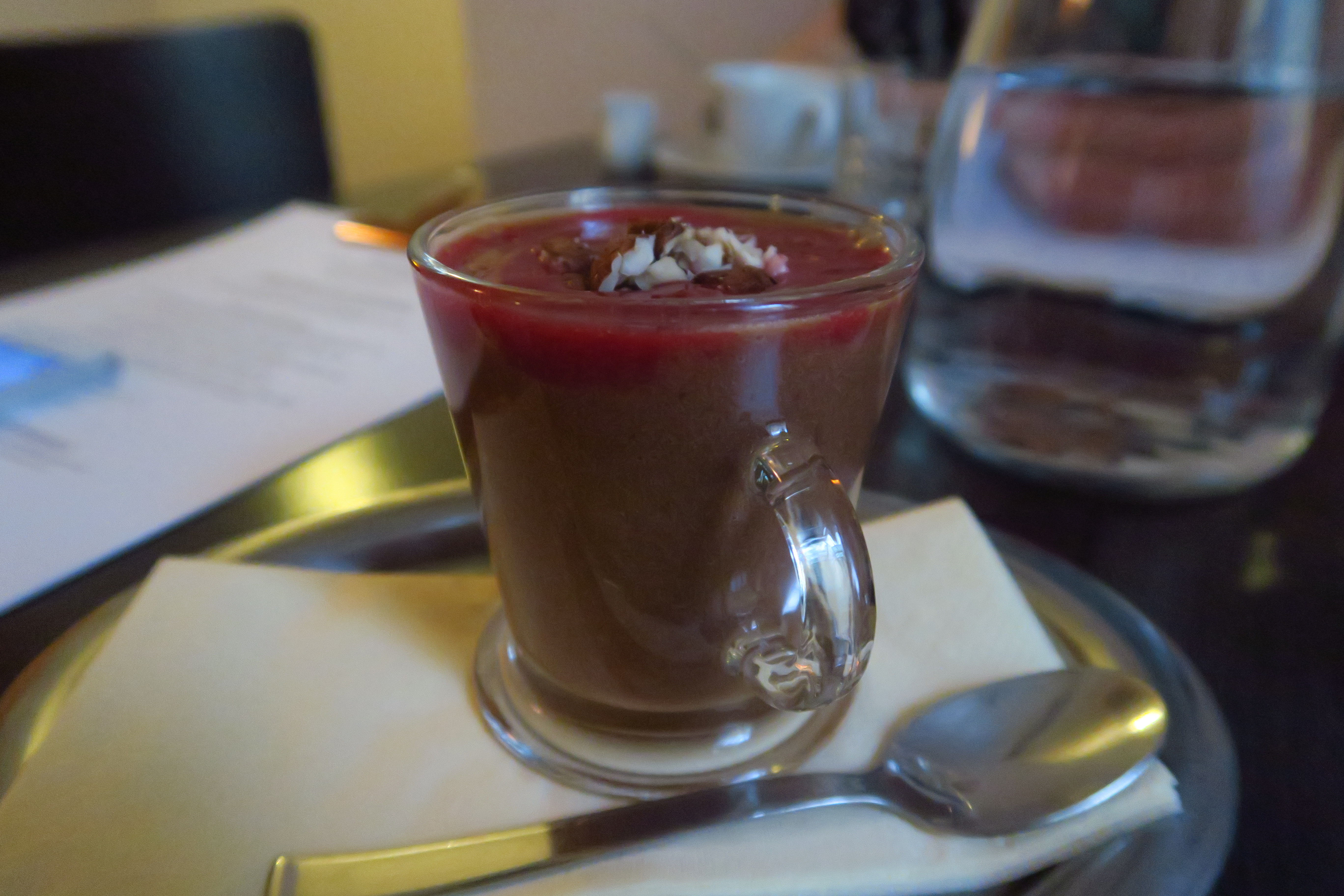 We managed to get quite a lot done in our few hours sitting in the lovely vegan cafe. After a wee while, it was time for us to head out and go to an event. Our friend Roisin was wanting to go to an event about hearing the untold stories of communism in the Czech Republic pre 1989. It was a really interesting event, with some amazing stories and talks. It was a good way to wrap up our time spent in a country with such old, beautiful, rough, and hushed history. I’m glad we went along.

When it was time to leave Prague that night, that’s when everything went a bit sour. We were getting the midnight train to Venice, which included several transfers,  and we were unsure about what trains would have restaurant cars and what vegan food they might have. With the hope that it would tide us over through most of the journey, we decided to go for some super late burritos at Burrito Loco, a 24 hr burrito place. When we got there, the lines were far, far too long for us to get our burritos made and purchased, and get on the metro to make it to the train station on time. So we left, thinking that we’d be able to snag something to eat from a place in the train station. Unfortunately, everything was shut. We very sadly sad goodbye to the idea of food, to Roisin, and to Prague. 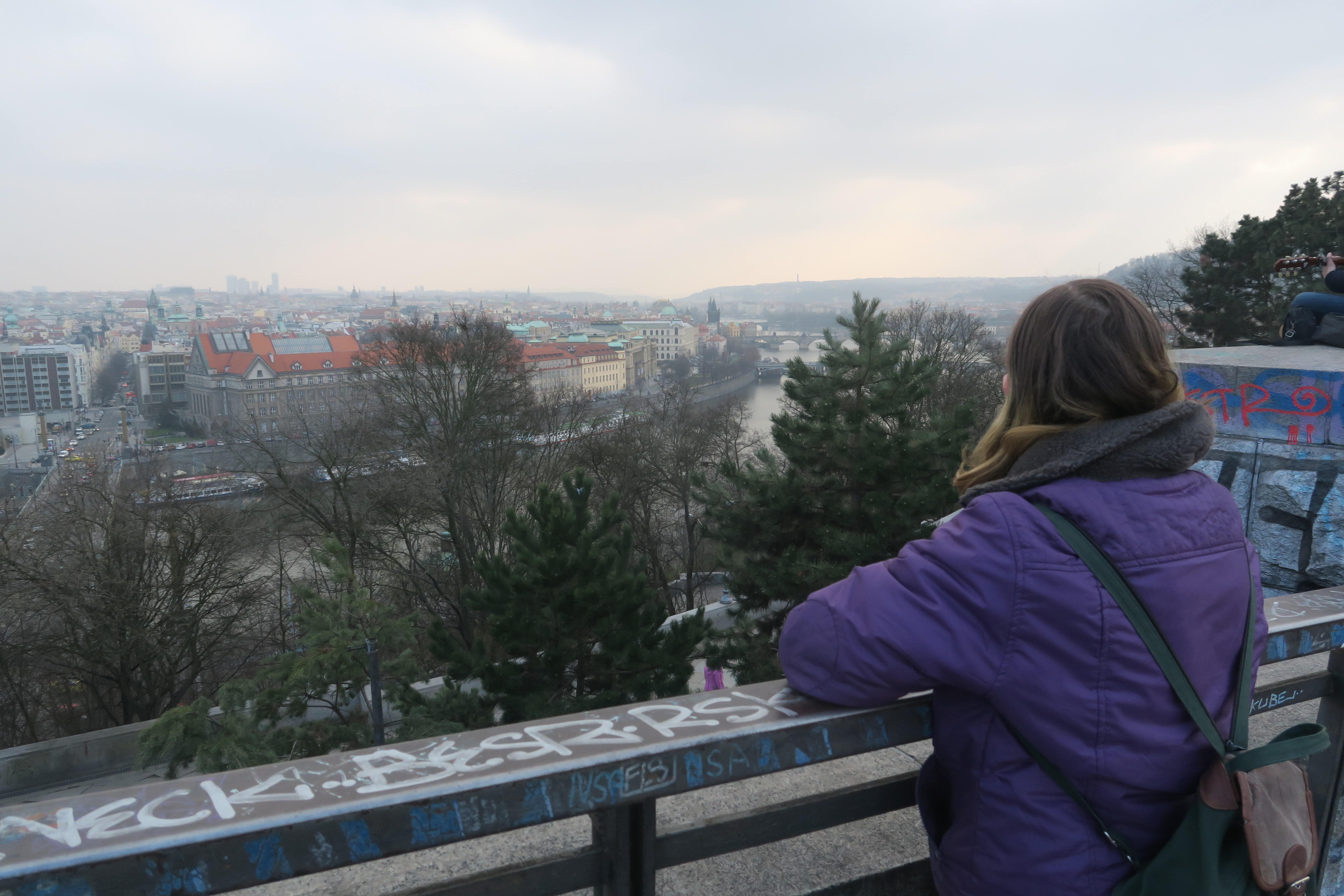 Taking an overnight train was pretty interesting. To me, it was the kind of thing that you only really see in beautiful old films. We were only on long enough to sleep for 5 very broken up hours, but it was still pretty cool to get the experience of sleeping on a train.

In the morning, we were given a wake-up call and a very disappointing breakfast of Nothing Vegan Friendly. It was okay, though! We knew we would be passing through Vienna soon and we had a plan to fix our food problems and fill our hungry bellies!  We arrived in Vienna at about seven. We had about a half an hour to catch our next connecting train to Innsbruck. We knew already that there was a grocery store with vegan cheese and rolls inside the station and had a plan to very quickly go in and grab something resembling a meal to tide us over, then jump back up and onto our next train. When we rushed to the grocery store, we found that they were shut until 8:30am, well after we would have left the station. The foodlessness continued. Then, we had a little hope! There was a smaller version of that grocery store in the station which opened at 6am! We rushed to the doors, ready to grab whatever items happened to be vegan. I would’ve eaten a whole jar of olives if it came to it! Alas, for no apparent reason and although they were open, they weren’t letting people come into the store. At this point in our misfortunes, I was convinced that we were cursed.
We caught our train and were immediately given a small menu from the restaurant car. OEBB’s trains seem to have one solid vegan option- a small sandwich with houmous, tomato sauce, and falafel. It wasn’t grand or great, but we both devoured the overpriced morsels anyway. We had a brief moment of feeling okay with the world and then went right back into hunger. It was hours and hours later that we would settle down in Venice and find ourselves a pizza.

(We were very very happy about it) 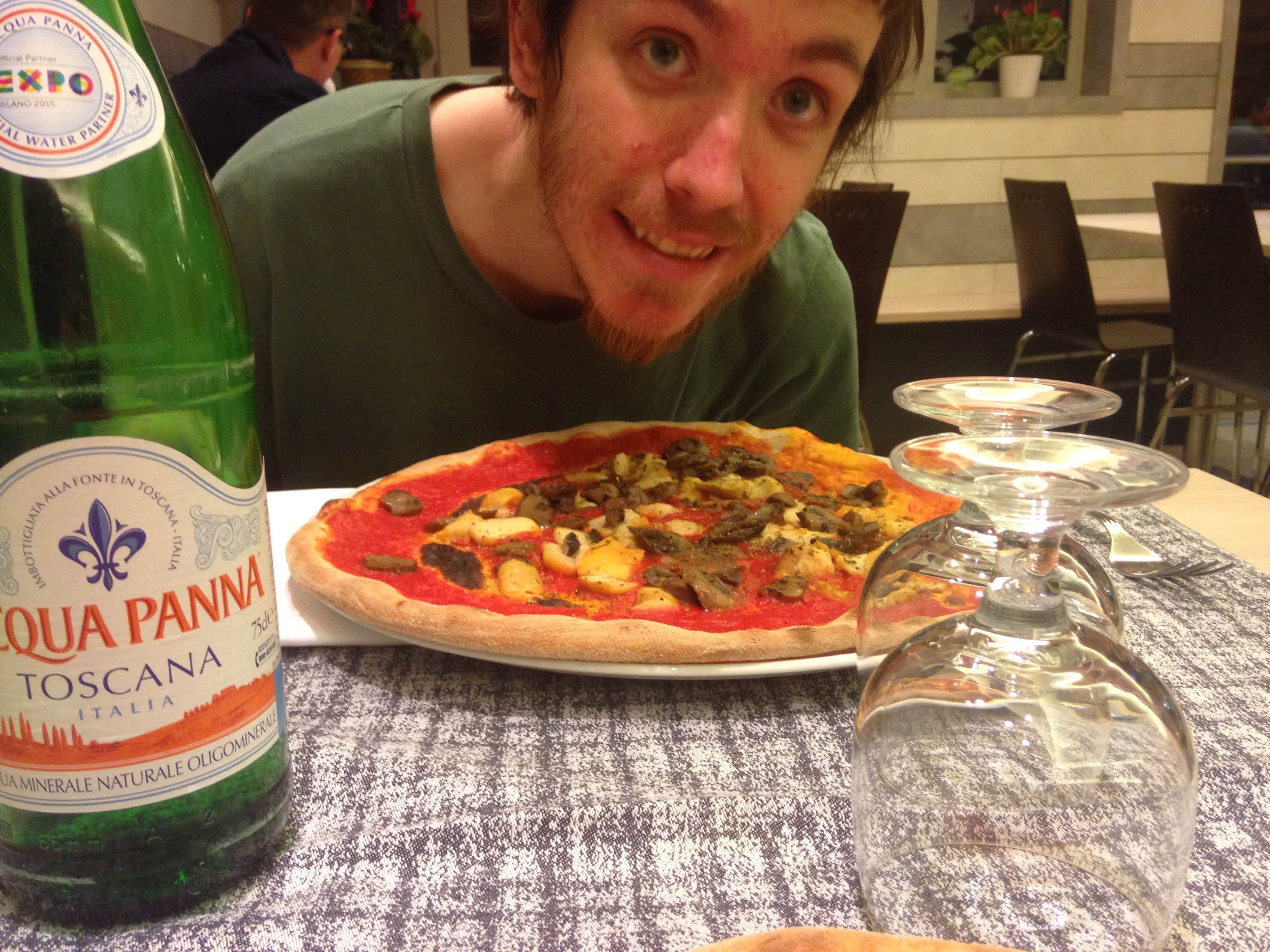 So why am I going on and on about all of these negative things? Why could I not have just said, “We were hungry for a really long time and then we got pizza!”? Well, because I want you to really feel how hungry we were, how frustrating those two days were, how things can change from brilliant to bad in one skipped burrito. Through all of this, we managed. The transfers were awful, the blood sugar lows were dizzying, the irritability was absolutely through the roof. But we managed. We didn’t fight, we didn’t kick, we didn’t give up. I’m not trying to praise us here, I just wanted to talk about a little bit of growth that I have seen during this trip; growth for myself and for my partner and for the way that we work together. Several months ago I wrote a post about how important it is to choose a good travelling partner. Now that we have been doing this for months, have been through some hellish times, and we’re almost done, I felt the need to reiterate. Sometimes it’s hard to take a deep breath and say, “that’s life!” in the face of annoying, disappointing hungry, daunting, no wifi-having situations. Sometimes it is necessary. And it is always really helpful emotionally when your travel partner is right there with you, saying “That’s life!” too. So thanks, Ross, for getting through all the trains, all the 24 1/2 hour Peruvian buses, all the food poisoning, the mixed up bookings, the bad directions, the lost towels, the missed dinners, and everything else with me. Here’s hoping these last three weeks go smooth as peanut butter.