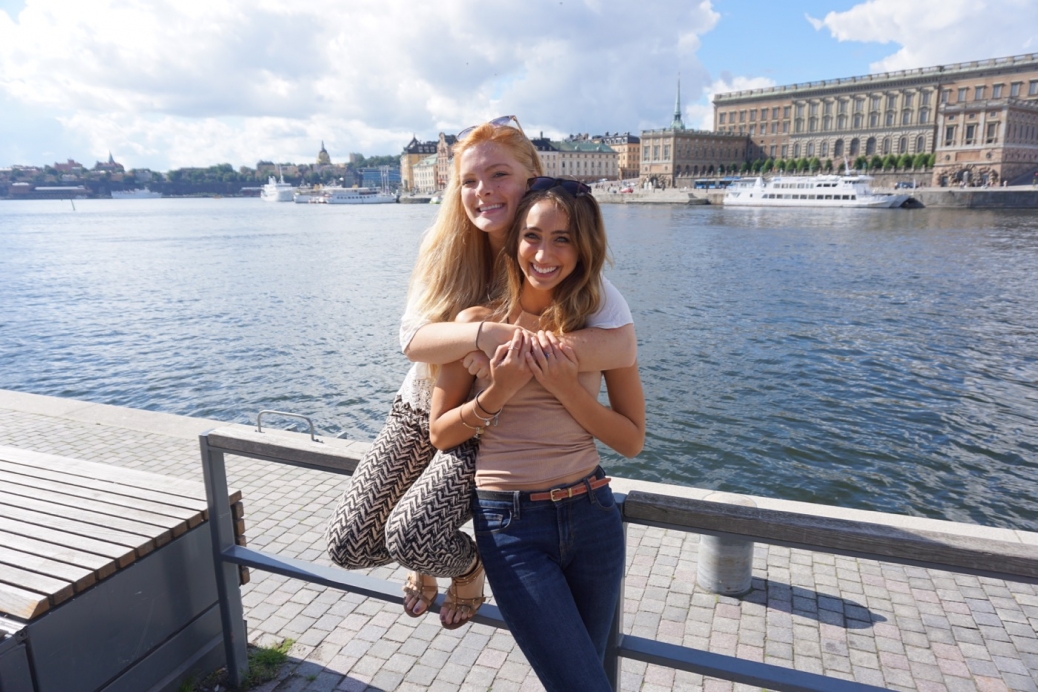 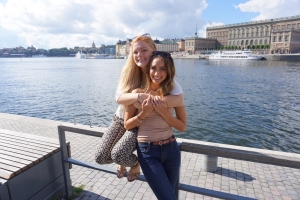 “Where are you from”

“I’m from West Virginia, and Shae is from Oregon”

“Opposite coasts, how did you cross paths?”

That’s usually how most conversations start when Shae and I meet new people on our travels together. It always sparks a lot of curiosity and questioning. Even with the normalization of dating apps and following strangers on social media, when we tell people we became best friends just by commenting on each other’s youtube videos for years they are still baffled by the idea of that.

I think there’s a different and stronger connection you can make with meeting people online because the site you are meeting through is close to your personal interests. It’s like if you take an art class in your community and make friends in the class; since your classmates went out of their way to sign up for that class, you’re going to have that in common and meet those people with that same interest. That’s kind of how it works meeting people on social media. I post about things that I’m interested in, get comments from people who like what I’m sharing and spark conversations in the comments. Veganism brings an immediate connection between people I meet online as well. Being vegan already shows that you share the same morals; compassion, selflessness, and good will. It’s already a match, just from saying you’re both vegan.

I’ve been on youtube for 8 years but it wasn’t until about 2 years ago that I started to actually make real friendships online. I was living in LA at the time, didn’t really know what direction I wanted to go with my life anymore, but I did know that I was beginning to become passionate about nutrition. I started a new youtube channel centered around veganism and health, linked a new instagram to it, and started to follow other accounts that related to the same topic. The reason I wasn’t really making new friends online before this change was because I wasn’t posting content I was passionate about. I was posting videos I knew would be “popular” and photos that would get the most likes, so when people would comment I never felt a true connection to them because I didn’t even feel a true connection to what I was creating. When you’re passionate and happy about what you’re sharing through social media, it’s easier to start a genuine conversation with a subscriber or follower. It’s just like “real life”. If you can’t carry a conversation when you aren’t totally invested in the topic, the momentum will burn out and you’ll move on. But if you’re talking about something that you both have excitement for, the conversation will carry on until you lose track of time, exchange numbers, meet for coffee to continue to talk about all you have in common, start to hangout more regularly, and soon consider each other great friends or more. Although making friends online can be seen as fictitious in common society, it’s exactly the same as meeting people in “real life” without the opportunity to meet in person right off the bat. You form the same connection, just through a different medium. We’re still humanly communicating. A connection is a connection.

For example, about a year ago I began to comment on a girl Maddie’s instagram because her posts inspired me and we talked about similar subjects on youtube. Flash forward a year, we’ve now met and I consider her one of my best friends. In March I went on a camping trip with Maddie to Shenandoah National Park with 3 other girls we all met through social media. All of us from all over the states, yet we still came together in Virginia to go camping having never actually met in real life. Somehow it was like I had known them for years. 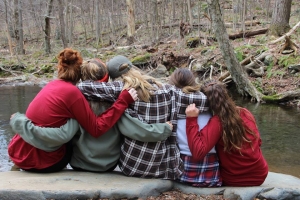 That’s the thing about social media. Many feel like it’s such a disconnected way to make friends— hiding behind a screen— but really it’s an easy outlet to express who you are completely and openly (especially if you’re generally introverted like myself) and chatting with other people who do the same.

So how exactly do you make friends online? It’s quite simple, you just have to put yourself out there! Here’s a couple tips I have if you’re looking to form your own vegan “squad”:

Getting sucked into the numbers game is inevitable on social media (guilty as charged). Followers, likes, comments; they’re attractive and rewarding. However, when you’re trying to make genuine relationships with people online, disregard any numbers. Someone who has 100k followers does not make them more important or more interesting than a person with 50 followers. Everyone wants to be friends with the “popular girls”, but basing who you talk to on if they have enough followers to be your friend is not the right foundation to a lasting real friendship. Start talking to other people because their content interests you and who you can relate to. I learned this lesson about a year and a half ago when Ally {@agirlnamedally} commented on my instagram photo and said that we needed to be friends because she loved what I was posting about. I didn’t even follow her at the time, but I went over to her page and realized she had over 100k followers! What?! Why would she want to be friends with ME!? Well…because she is a decent human being who doesn’t care how many followers I have but cares about my character and personality. And that is why we are still good friends today.

How are you going to start a conversation if you don’t respond to comments? Do I respond to every single one? No, of course not. But it all starts by responding to comments, commenting on their content, and sparking conversations that lead off the site and into text messaging, FaceTime calls, and eventually face-to-face communication. When you like a post or video, don’t just like it but let them know what you liked about it. It’s a perfect way to share that you have the same interests. And sometimes, if you really love or personally connect with what someone is sharing, be upfront! That’s how I became friends with Ally—she straight up said “we need to be friends” on one of my photos. And I’ve done the same which sprouted my budding friendship with @micaelaklick (did I just make a vegan pun?).

Totally not what you grew up hearing, huh? Everyone online that isn’t family or someone from school or work is a stranger. Even though you “follow” their every move, every meal, every #ootd, you don’t actually know them and that can be scary. However, you have to be open to stepping outside of your comfort zone and talking to these “strangers”. The first time I gave out my phone number to someone I was chatting with online, I felt like I was going against everything I was taught growing up and I was going to end up getting stalked and killed (a bit of an exaggeration, but that’s what a late night SVU addiction will do to your imagination). But I didn’t just give out my phone number after one chat. After it was clear we had a lot to talk about via youtube comments, I trusted that I wasn’t just giving my number out to some creep. It also helps if it’s someone on youtube because you are actually watching them speak and you see their mannerism which gives you a better understanding of who they are. And even though giving out a phone number is super personal, the trust builds an even stronger bond from the start. And because I gave out my number to some stranger on youtube, I now have my best friend and we’re traveling the world together to promote veganism (shoutout to my girl Shae). 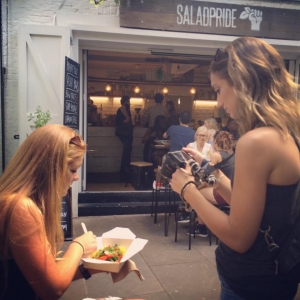 Working on our “Vegan in London” video with Shae, who I met originally through youtube!

Like I said before, if you’re posting content you don’t really love you’re not going to connect with the people who do enjoy the same things. Post what you want. Forget what people are going to think. Forget what is trending. What do you feel connected to? What message do you want to publicly put out into the cyberworld? If you stay true to you, you’ll effortlessly find yourself attracting the right people into your life.

Having a meetup in a city or town is probably the easiest and most comfortable way to meet face-to-face with the people you have chatted with online and to make new friends with those who may follow your accounts as well. Post something to your instagram or twitter about how you want to meet new vegans in your area or an area you’re visiting and see if you get some responses from people who would like to join! Set a date, time, location, pick up some vegan food to share (or meetup at a vegan restaurant), and chat over vegan goodies about cowspiracy and the new Ben & Jerrys ice cream flavors! Piece of {vegan} cake! 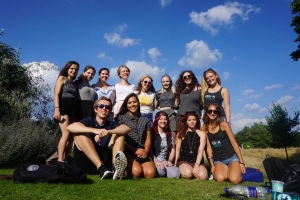 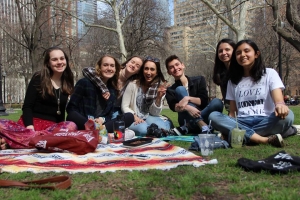 Understanding that an online relationship is almost always also a long distance relationship is a big key in making and keeping these friendships. Everyone is busy in their own everyday lives so sometimes liking and commenting on their content is an okay way to let them know you’re still there. But even just once a month, sending them a quick text or phone call to say hello and catch up is an easy way to keep that connection. Communication is key in any relationship.

Now more than half of my friendship circle is full of people I met through social media. Don’t be afraid to follow these tips and find your own vegan crew #goals. 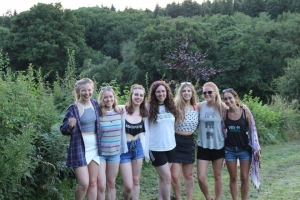 Vegan friends in the UK. We actually stayed with @charlotteadamsx during our trip, who I met because of instagram!

You can find more from Me and Shae here: