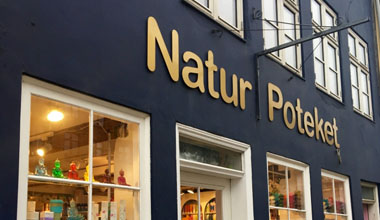 Hello all! This is my first post so I’ll tell you a little about myself. I’ve been vegan for a year now, it’s been an amazing, life changing journey so far. I am from New York and arrived in Copenhagen, Denmark in January where I will be staying until May. At first I was nervous about having a vegan lifestyle while traveling abroad but since I’ve gotten here I’ve been so surprised by how vegan-friendly this city is!

The other day as I was on the bus I passed this small shop that caught my eye called Natur Poteket. I’ve passed it by many times before but can’t believe I never noticed it until now. I got off the next stop and walked into this colorful shop with its walls covered in different products. Everything was all natural- food, cosmetics, and even crystals and little spiritual trinkets. 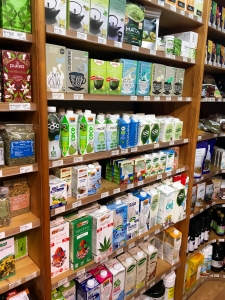 What excited me the most was obviously all of the vegan things. Every superfood was probably sold in that store. There was sooo much I wanted to buy, and probably would have if I owned a blender here because they had a lot of powders for smoothies and stuff like that. 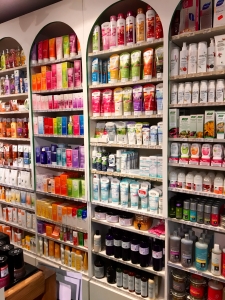 Along with bath products they also had cruelty-free makeup, basically everything you need in one store! Of course I didn’t walk out empty handed. I was there analyzing everything for longer than the average customer. I controlled myself and only bought 2 things. Before I show what I bought let me make a disclaimer: my sweet tooth since I’ve gotten here has been uncontrollable! Lately I just want to eat chocolate, and luckily every grocery store I’ve been to sells lots of vegan chocolate bars, but those are risky because I would literally finish the entire thing in one day. So, I justified my purchase of a vegan chocolate spread (that was around $10?) by reminding myself it will hopefully last me a couple months and is an easier alternative than uncontrollably eating a bunch of expensive chocolate bars. 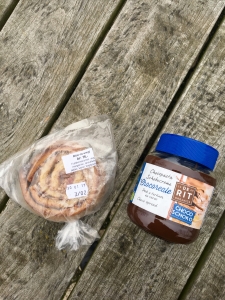 So I bought this chocolate spread along with this apple bun, which I made sure was vegan by asking an employee because I can’t read Danish. I was so happy I found that bun because I also get random cravings for cinnamon buns, it’s so weird but they’re so damn good. 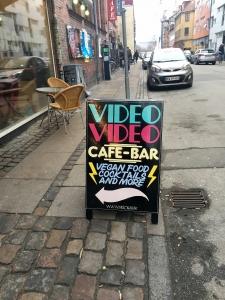 On my way back from the shop I took an alternative route and just wanted to include this place to prove that there really is vegan food hidden all around Copenhagen, even in this little side street that leads to nowhere! I will definitely be going here soon since it’s right near my apartment, but for now I just wanted to take a quick photo. 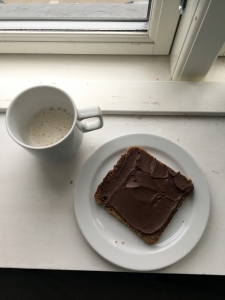 Naturally, right when I got home I had to taste test the chocolate spread! It was DELICIOUS. A perfect sweet treat with a cup of almond milk on the side. Amazing. I love being a vegan in Copenhagen.