I was so excited and looking forward to our vacation in Havana, Cuba! I knew before our trip that one aspect we needed to research was plant based food. I’m vegan; a quick explanation to those of you who haven’t read my previous blog posts: I believe that exploiting animals for any purpose is wrong and think it’s immoral to kill sentient beings for food. My husband, Marc, who is also vegan, researched the topic prior to our trip. Travel websites such as TripAdvisor, vegan restaurant finder Happy Cow, and current personal blogs of vegans who live or travel in Cuba, were all useful sources of information. The good news, being vegan in Havana was much easier than we suspected.

Before talking about our experience in Havana, I feel it’s important to mention that food is not plentiful in Cuba. The government maintains a rations system. Each Cuban is allowed to buy a specific amount of certain basic food products, at heavily subsidized prices, sold in specialized stores. But the rationed food is not enough, certainly not for a family, and it may be half or a third of their food consumption. Buying more food is expensive and may be unaffordable for most Cubans who work for the state-run sector, with an average monthly salary of about $25. There are food shortages, and many products are not available at all. 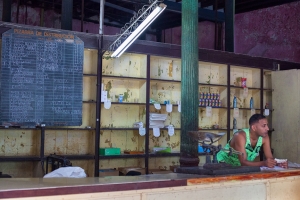 According to the New York Times, soaring prices and scarce food are a result of the rise in tourism. Cubans cannot compete with the high prices that tourists, and the restaurants that serve them, can pay for food. Privately-owned restaurants (paladares) cater to tourists and diplomats who can afford to pay for the food while the average Cubans can’t. Animal based dishes, such as steaks and lobsters, can cost Cubans almost their entire monthly salary.

Based on our pre-trip research we decided to bring peanut butter, granola, vegan cereals and power bars, soy milk and nuts. This proved to be a good idea; we did not see any peanut butter, cereals or granola in the stores we visited in Havana. In fact, the grocery stores we saw were small and had very little food; many of the shelves were completely empty or contained the same product.

We read that most Cubans are not familiar with the concept of veganism (much like some folks at our Chicago suburban restaurants…) and one needs to clarify: no meat, fish, dairy or eggs. On our first night at our casa particular (B&B), we explained to our accommodating host that we are vegan. The breakfast she prepared for us included plantains, papayas, guavas, watermelon, pineapple, vegetable salad, mango jam and buns, pineapple and guava juices, coffee and tea. All that combined with some of the foods we brought made for a delicious breakfast.

Explaining the vegan concept worked just fine. During the day we stopped at various restaurants for lunch and dinner. We could always count on several dishes served at most Cuban restaurants such as rice & beans and various veggie pastas. One place in particular, Cafe Bohemia at Plaza Vieja, was a favorite lunch break, with coffee and a roasted veggies baguette sandwich. It’s the only place I saw the word “vegan” on the menu. They also serve other vegan dishes such as pasta, ratatouille, humus, salads and fruit juices. The Italian owner of the place told us that she is introducing vegan and vegetarian dishes as demand for plant based food has been growing.

There are many outdoor markets (agromercado) in various places in the city where one can purchase fresh (and organic) fruit and vegetables. 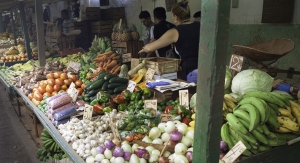 I can’t talk about food in Havana without mentioning drinks. Imbibing cocktails is a must, most are vegan thankfully. The Mojitos, Daiquiris and Caipirinhas were fantastic (and inexpensive)! 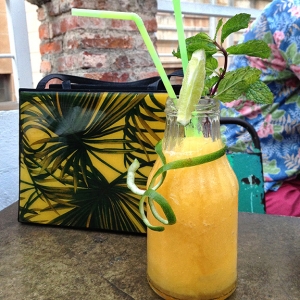 Finally, our wonderful hosts at the second casa particular we stayed at, Maby and Arnaldo, were excited to know that we’re vegan. They were so gracious and generous as to invite us to a home cooked vegan dinner. It was the most delicious meal we had in Havana! 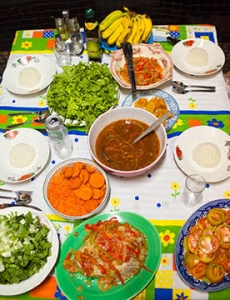 Havana is such a unique city; we absolutely loved being there and getting to know some of its people. Being vegan was easy and it should not surprise anyone, plant based food is the simplest, most accessible and affordable. And the additional bonus of being vegan (beyond helping the animals, the environment and our health) are the encounters with new people who are curious about veganism, and the opportunity to talk about compassion to non-human animals and the benefits of a plant based diet.

For more about my thoughts about our relationship with non-human animals and veganism follow my blog: i’m an animal too.