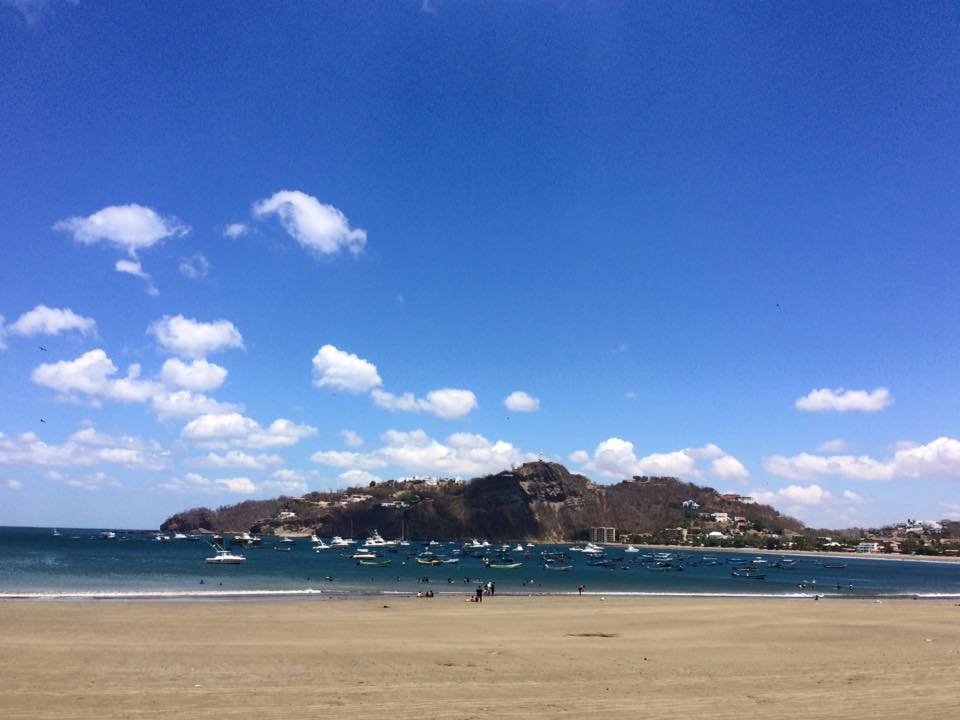 The following is a recap of my 3 weeks spent in San Juan Del Sur, which forever changed my life as a first-time solo female backpacker. I spent March 2nd to April 27th, 2016 backpacking around Central America and met PLENTY of awesome people along the way. On April 7th, 2016 I traveled by 4 different buses and one taxi from La Fortuna, Costa Rica to San Juan Del Sur, Nicaragua. This leap was a defining moment of my travels. Everything was relatively well planned out for me and my savings account was looking very strong during my Costa Rican adventures (total of 5 weeks in Costa Rica). But the day I decided to take my new friend Gloria’s advice and meet up with her friend Angela who owns a restaurant in San Juan Del Sur was the day I felt like a TRUE traveler. “A good traveler has no fixed plans and is not intent on arriving”- Lao Tzu. 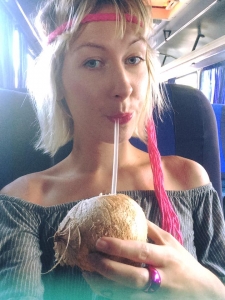 Bus #3 to the border! MMM coconut juice to maintain my energy!

I met my new friend Gloria and her traveling companion Jake at a hostel in Puerto Viejo, Costa Rica. I thoroughly enjoyed our 2-hour long conversation of being nomads. This chick is in TUNE with the world and I loved her advice. “Being a traveling nomad changes you. You can’t put the genie back in the bottle.” Since we hit it off so well, I absolutely took her and Jake’s advice about rerouting my adventure to San Juan Del Sur, Nicaragua. The way they described the surf town, everything is needed there, in a very good way. “Anything you want to pursue or make happen in San Juan Del Sur, you can do it. If you want to go there for dance, you can dance. If you want to go there for massage therapy, people want massages. If you want to go there and start your own business, living is so affordable you can start your own business.” 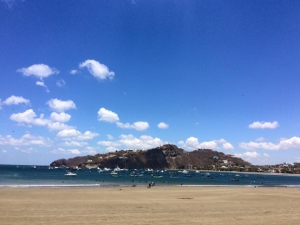 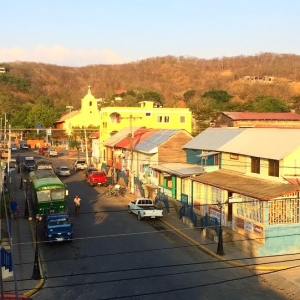 SOLD! April 7th I arrived in Nicaragua after the 3rd bus that day to the border. After waiting in lines and paying the $7 tax to enter the country I then had to find a 4th bus or some way to San Juan Del Sur. This is the part of my journey in which I could have planned better. After paying the country tax you then have to walk a couple of blocks to the next inspection point in which you show your passport once more. I showed my passport and continued to roam where everyone else was roaming- towards a HUGE outdoor market and bus area. As I was following others, I passed by an enormous group of “Nica” male soldiers who appeared to be ready for an invasion at any moment. This moment of time I’ll never forget- when that entire group of intimidating armed soldiers whistled shamelessly in my direction. “Heyyyyyyyyy mami!!!!!” WELCOME TO NICARAGUA, MARIA. Buckle up.

Eventually I found a decent taxi driver and shared the taxi with a traveling German who unexpectedly decided to go to San Juan Del Sur as well! The taxi driver was awesome and pulled us off the main road to get this EPIC shot of Ometepe Island! Ometepe is the largest island in Lake Nicaragua formed by two volcanoes named Concepcion and Maderas. One day I must return to Nicaragua and explore Ometepe. 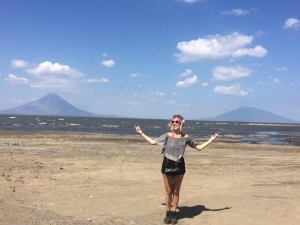 The moment I stepped foot into the center of San Juan Del Sur, I knew it was a place that was going to be hard to leave. This little beach town is sure charming! The town is right off of a Pacific Ocean cove and it’s easily known for the best sunsets in Central America. My friend in Costa Rica, Christiano, warned me before going- “watch out for those sunsets! Best sunsets you’ll ever see in your life!” 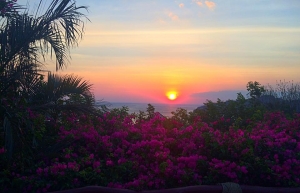 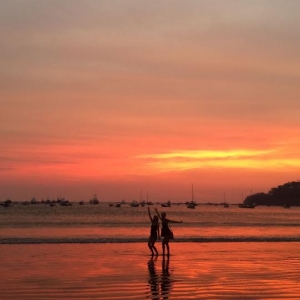 Sundown at the main beach in SJDS- with my new friend Andie from Montreal.

There are a LARGE number of Canadian expats living in San Juan Del Sur. Or (SJDS) as I’ll continue to call it. And one of those expats is Angela- the friend Gloria advised me to link up with while in town. Instantly Angela and I clicked and she walked me around the tiny beach town in a matter of 20 minutes. It was so breathtaking and overwhelming! Even more overwhelming when on the very first day I randomly convinced myself to sign up for Spanish lessons! Something that had been on my mind since traveling around Costa Rica and knowing very little Spanish. Angela had taken about 5 weeks with her instructor Irlanda and her Spanish definitely impressed me. So my reaction was “Sign me right up!” To stay and learn Spanish with Irlanda, 4 hours a day for two weeks, I was to stay with her dear neighbor Marta and family. 4 hours of Spanish lessons Monday through Friday including a bed to sleep in and 3 meals freshly prepared per day by ‘mi maravillosacocinera’ Marta!

Of course I had to explain to Marta in the best Spanglish I could that I am a vegan. I don’t consume animal products. I believe this left a lasting first impression! “Solamente frutas y vegetales y pasta por favor! No comocarne no comoanimales!” She was very kind in return and continued to impress me each and every day with her flavorful vegan combinations! 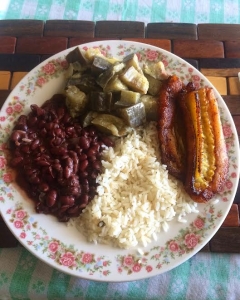 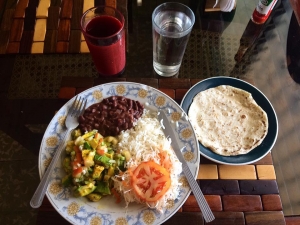 Comida typical! What a typical lunch/dinner looked for me @ casa de Marta! 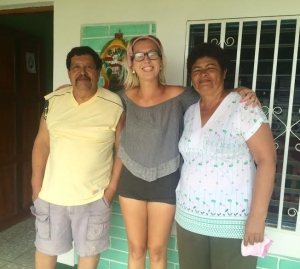 Marta and her husband were such excellent hosts!

I highly suggest Irlanda to anyone desiring to learn Spanish. She arrived on time each morning and always kept the lessons interesting! We often ended the last 30 mins of the lesson with Spanish Scrabble. She can be reached at irlandas2016@gmail.com

And her FB PAGE. 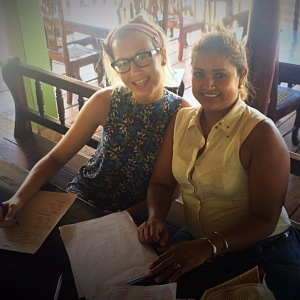 Me and Irlanda during my Spanish lesson at Rojo Loco on the beach!

In terms of finding fresh vegan food in town- totally doable. There are plenty of markets open each day with affordable fruits and vegetables. My favorite- the bananas and mangoes that Nicaragua has to offer! There is also a beautiful spot called Buddha’s Garden which offers vegetarian and vegan options. A very chill atmosphere that provides a loft above the restaurant for your yoga needs. I took one yoga class and one hula-hoop class there. Although my absolute favorite places to do yoga are Casa Oro and Pelican Eyes in SJDS. Casa Oro has two daily FREE yoga classes! It was awesome meeting instructors from around the world who come to Casa Oro to teach and spread their light with others. Pelican Eyes is not publicly known to offer yoga. BUT I did plenty of yoga at the top of the resort over looking their incredible 5-star pools. Pelican Eyes is easily the best resort in SJDS and I was fortunate enough to swim in the pools and catch some live entertainment at my leisure. Truth be told I even had an interview with the manager at Pelican Eyes! 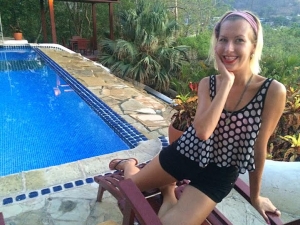 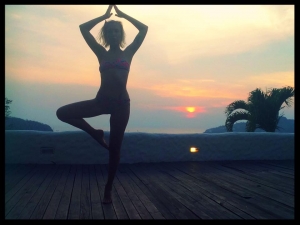 The manager at Pelican Eyes revealed to me that this time of year is their SLOW season. Likely why he called me in for an interview right away after I dropped off my resume! The 3 weeks I spent in SJDS were extremely unbelievably hot. I was sweating bullets on the daily and had to take a mid-afternoon nap each day to regain my energy. So it was honestly no surprise to me when the manager told me it was their “slow season” in April. He explained it will pick back up in the October-February months because northerners will want to escape their cold weather. So nope I didn’t get the job at Pelican Eyes, but I must admit curiosity had the best of me when I dropped off my resume. What IF I could stay and work in Nicaragua and room up with Angela? Make this my life for the next 6 months? 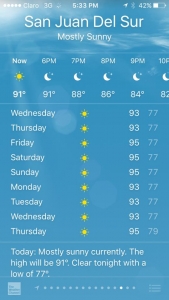 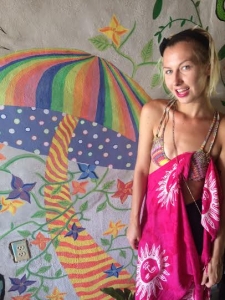 Because of the heat, this is what I wore on a typical day in SJDS. My yoga/bikini top and a sarong. My first sarong! It’s a must in Central America.

But I did snap back to reality and come to terms with the fact that there’s still SO much of the world to explore. And this is just me getting started. Me getting my feet wet in the very warm and tempting waters of the Pacific Ocean. As my first backpacking experience, I have learned SO much. And I desire to continue to be a nomad. A nomad with always a good book in hand. “Into The Wild,” “The Places That Scare You” and “The Alchemist” have inspired me to keep this nomadic dream a reality! 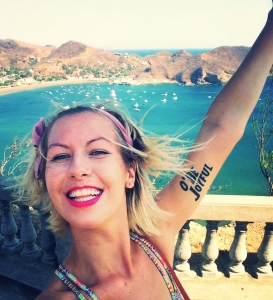 Conquered the hike up to the famous Jesus Statue! Such a view of SJDS and I had the entire view to myself since I went during the mid day heat and SURVIVED! hah! 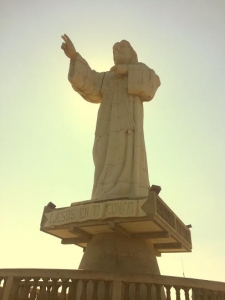 The famous Jesus Statue of SJDS

What did I love most about Nicaragua? The culture. The sunsets. The people. I still hear from my Spanish teacher on Facebook and she asks when I’ll return. I still see Ceviche’s inviting posts about hitting the coast in his catamaran and partying til sundown. I still miss the intense glowing sun across my body as I bend over into ‘forward fold’ in the upstairs balcony of Casa Oro. And I crave the undeniable freedom San Juan Del Sur had to offer a young backpacker like myself. “If you are brave enough to say goodbye, life will reward you with a new hello”- Paulo Coelho. 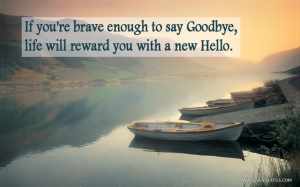