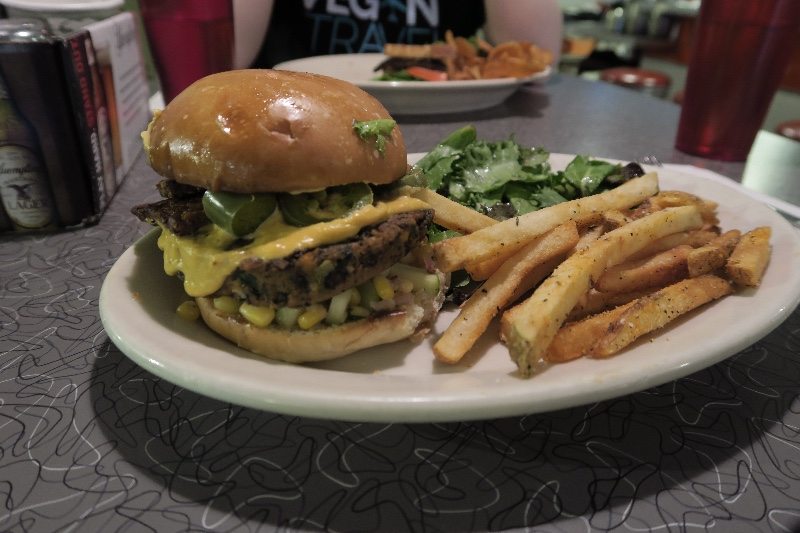 I may not technically be lost in Boston, but I am quite stuck on it. The first three days that Ross and I were here went by way too quickly. We met the most amazing group of people while couch surfing, had our very first pieces of Boston Cream Pie at a place called Veggie Galaxy, and fell completely in love with the city. Specifically, we fell in love with Cambridge, the area surrounding Veggie Galaxy. In just a block or two there is a vegan-friendly omni-restaurant called Middle-East, a vegan juice place called Life Alive, and a Harvest grocery store (basically WholeFoods, but more local). All of this in one tiny area, about a mile’s walk from the beautiful Harvard campus.
Because of all the life we found in such a small area of Boston, it became clear to us that there was so much that we still hadn’t seen in our three days. We started to play with the idea of skipping our bus up to Maine and staying in Massachusetts for longer. When we found out that one of the amazing people we met was playing a gig this weekend and there was a VegFest this weekend and Will Travel For Vegan Food was going to be there, it made the decision a lot easier. Plus, we wanted to revisit Veggie Galaxy and get more of their amazing Boston Cream Pie. We totally did, by the way. That is, we totally skipped our bus and immediately went to Veggie Galaxy to eat more of their amazing food and do a short little video about them.

I’m really quite happy about our decision to stay in Boston. Since we’ve decided to stay, we’ve had some really beautiful houmous made for us by our couchsurfing host on our last morning with them, we’ve checked into a pretty cool hostel, and last night I ran into someone who was considering going vegan in the kitchen!
The latter of this list is what I’m most excited about. If we had gone to Maine, I would have completely missed out on an opportunity to talk to an aspiring Vegan for 25 minutes, while I stirred together some rice and beans and they microwaved some noodles. They were in Boston for work and told me all about their Jersey-veggie woes. They told me that sometimes it’s really difficult to even be vegetarian when they have to travel for work and they’re way too busy to cook every day. I tried to encourage them in their vegetarianism as best as I could and told them about my favourite vegan lunch to pack- the chickpea salad sandwich. You just mash up some chickpeas with a fork, throw in some lemon juice, relish, veganaise, mustard, whatever else suits your fancy whether it be salt and pepper or some cayenne or even seaweed to make it taste like tunafish.  (I put in a teaspoon or so of Old Bay Seasoning because MARYLAND!) You throw it on a roll with some tomatoes and lettuce and bam! an amazing and filling lunch.
I’m hoping that my new vegetarian friend will try transitioning their lunches to inexpensive and easy vegan things like this and see how that goes. Who knows, maybe we’ll bump into them when we go to New York in the next couple of weeks. Maybe they’ll check out the website and read this very blog post. (If you’re reading this, Hi!) No matter what happens, I’m glad to have met that veggie in the kitchen and glad to have had a nice conversation with them. And now I am glad to plan out what things I will do at VegFest tomorrow and then go take a nap. Boston is wearing me out!

Until next time!
Ellie

p.s. Major kudos to Ross for his video editing and cheeseburger eating.