Eating is the Easy Part 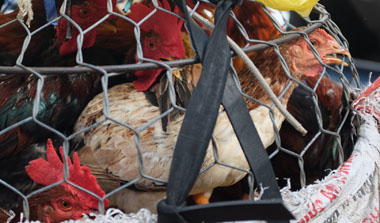 I can always live on rice and fruit for a while, but coming to terms with a violent world can be an unbearable challenge.

When people ask me about traveling they often ask if I’m still going to be vegan on the road. This innocent but misguided question illustrates a common misconception about ethical veganism. So, briefly, this is the confusion:

So when I’m traveling, am I going to abandon my core ethical framework? Am I going to stop trying to minimize the suffering I cause? Of course not.

In my experience traveling as a vegan, that list of “banned foods” has presented only minimal problems. Are there inconvenient times? Plenty. Hungry/hangry times? Here and there. Moments I had to make a choice with limited options, information, or ability to communicate? Certainly. But all of this amounts to a bit of annoyance, some awkwardness, and a new appreciation for the convenience of home. The real challenge is something that I don’t normally talk about, and that I’d prefer not to even think about. The real challenge is in thrusting myself into a world that is often violent, and largely oblivious to suffering and death.

Back home my veganism revolves around food. I indulge in the newest offering of vegan root beer floats, or “chicken” and waffles at a local restaurant. I delight in triumphantly veganizing deviled eggs or banana cream pie. I engage in bake-tivism (reaching minds through stomachs), showering my friends with pancakes and cupcakes. And at times, I even have to remind myself what it’s about—that is, who it’s about. It revolves around lists of food and not around suffering because I don’t see the chickens who laid the eggs my friend is eating at brunch, in cages so small they can’t spread their wings. I abhor the rodeo, but I don’t go to the rodeo and watch the terrified baby cows being chased, roped, thrown to the ground, and tied up. I don’t see them by choice and out of privilege.

On the road I am not so sheltered, not so lucky. Walking around the bustling street market my mouth waters for new and exotic fruits, grown right here in northern Vietnam. There’s jackfruit, lychee, and others I don’t even recognize, but then my eyes command—”HEY! Look over there! It’s a dead dog!” Half of its—no, his or her body, hair burned off, paws chopped off, and his or her head, disembodied, tongue sticking out, on display and up for sale. My heart sinks to the pit of my stomach. It’s one thing to hear “oh yeah it’s horrible, in some places they eat dogs!” And, in the comforting distance of home, it’s easy to respond in abstractions; it’s just a cultural difference—cows, chickens, and pigs suffer just the same. But it’s another thing, it turns out, to hear the terrified yelps of dogs in cages, wanting nothing but freedom and safety, not knowing their fate. But I know. I know they will die soon. I know they will die afraid and in pain, that they will soon be unrecognizable: fur gone, bodies cut in half and in half again, and again, the remains of their suffering covered in a glistening, caramelized veneer. My conscience pleads: ACT! DO SOMETHING! SAVE THEM! But my mind reasons “you know there is nothing you can do, so just don’t make a scene.” My conscience says LOOK! THE LEAST YOU CAN DO IS BEAR WITNESS! But my heart says “no, no, I simply cannot bear it.”

So I move on, hurriedly, eyes to the ground. I move past the fading pleas of the dogs. I move past the chickens and ducks, crammed into tiny cages on the hot sidewalk, hiding terrified and in vain under one another. I move past the sight and smell of who knows what—or who, is roasting on a skewer, tempting passersby. I make it back to my room, throw some rice, beans, coconut, and veggies in my rice cooker. And I try to work up an appetite, while crying into my useless hands.

Later that night I lay awake in my empty hotel room. I’ve had to deal with loud neighbors many times but this is different. I hear a rowdy group of men partying at the restaurant across the street and all I can think is; they are smiling, joking, and laughing, and they are eating dogs. I pray for sleep, for a fake nightmare to take me from this real one. And from then on this new awareness of what’s happening grips me tightly. The one Vietnamese phrase I can instantly recognize advertised on storefronts and food carts is “thịt chó,” dog meat—a frequent reminder of the brutality just barely under the surface of the Vietnamese landscape. As I drive from town to town, through villages and cities, as I explore new streets and new markets I am no longer filled with delight and curiosity, but rather anger and fear, bracing myself for what I might see around every blind corner.

This is an extreme example, but the theme is constant in my life: humans can be violent, cruel, and selfish, and there is rarely anything I can do about it. I want to be encouraged by all the lovely people I meet, by all the new, enthusiastic vegans around the world, creating and sharing beautiful food, and spreading awareness about the plight of the voiceless. But in the back of my mind I am haunted by those yelps. And I know that nothing I do will save those dogs, those dogs who cried to me for help, and who are surely no longer with us.

So what, then, can I do? If I could smash all the cages with the snap of my fingers I would, but I can’t. If I had the money and resources to buy the millions of dogs on the market and give them loving homes I would, but I don’t, and even that wouldn’t stop the industry. So do I just say “fuck it! If I can only stop a tiny fraction of the suffering in the world then it’s not worth trying—not worth caring,” do I give up my ethics, and harden my heart? I don’t think I could if I wanted to. And I don’t want to, because my heart is what keeps me engaged in the world. It keeps me passionate about fighting injustice. And it allows me glimpses of true happiness in the presence of love and compassion. So as far as I can tell, the only answer is a non-answer: simply that empathy is a burden. It is a beautiful, powerful, and terrifying burden. But if future generations of dogs—and chickens and cows and pigs—are going to be spared the misery I could not stop today, the world needs more of it, not less.

On the bright side, there are a lot of people doing amazing work all around the world. I wrote about some of them (and some super cute animals) in “Refuge,” about an animal rescue in central Vietnam. Obviously going vegan is a good place to start if you want to make a change, but if you’re compelled to do something about the dog meat industry, check out Vietnam Animal Aid & Rescue, the Asian Canine Protection Alliance, Humane Society International, or the Change for Animals Foundation.

See more at Earth & Eats, or on Instagram: @earth.and.eats.