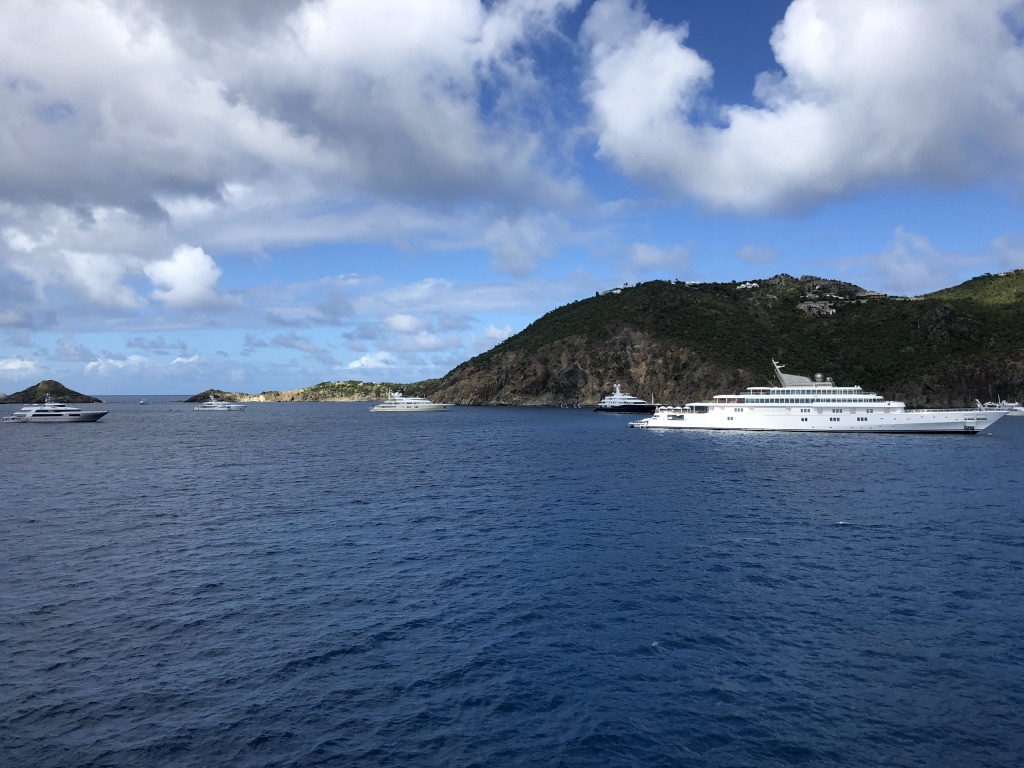 To escape the cold dark Swedish/English winters, my family and I left for a Caribbean Cruise during Christmas with Marella Cruises, part of TUI.

The flight was in a Dreamliner that has better cabin pressure, larger windows and less CO2 emissions (more fuel-efficient planes and shorter flight times) than normal flights. The airplane food was relatively good with couscous, Moroccan tagine for dinner and vegan sausages for breakfast. One of the snacks was a mango cereal bar that was amazing.

The cruise was the Marella Celebration and the food was good. There was seitan curry, pea consomme, fruit salad, vegan corn cakes, aubergine and tahini salad, sweet potato and spinach curry. The soup every day was vegan and different, from butternut squash to spinach to pea. There was always a fresh salad bar and fruit salad. For breakfast there was porridge made with water, muesli, cereal, tomatoes, mushrooms, toast, maple syrup and jams.

The first day was St Lucia and it is a beautiful island. After I took some sea sickness tablets I was ready to explore the island. We went to a rainforest and had a cable car through the different layers of the forest, which gave us a gorgeous view of the trees, plants, humming birds and flowers. We could even see the island Martinique. To scare us there was a tarantula in the gift shop!

The next stop was St Barts, the island of celebrities. The yachts were massive and we saw Paul McCartney’s and Roman Abramovich’s. We took an island overview tour and a yellow submarine to observe the coral reefs and a shipwreck.

Antigua was the next port of call. We went on a speed boat to a private island, Cruseo Island, although there were quite a few tourists on the island. The lunch was plantain, salad, bread and banana bread. It was a beautiful small island, with coral reefs just off the beach. We also walked through St John’s and the buildings are colourful, there was music playing through the streets and everyone was very friendly.

Christmas day was spent at Sea, where we had a bridge tour to meet the Captain and saw how they steered the ship. Most British people were sunbathing and of course we watched the Queen’s Speech. The vegan Christmas Day dinner was really nice with leek and spinach tartlet, tortillas and fruit salad.

Boxing Day we spent on the British Virgin Islands. We had a tour around Tortola, and you could still see the devastation from Hurricane Irma, with roofs missing and the school still destroyed. Then we took a ferry to Virgin Gorda. Virgin Gorda was beautiful with massive rock formations that led into beaches and coves at The Baths. It was a labyrinth of beachside boulders with pools and grottoes. We also went to a stunning white-sand beach called Devil’s Bay. For lunch the only vegan options were chips and plantain.

St Vincent and the Grenadines was the next island, where we took a guided tour around the island’s highlights. We stopped at the Botanical Gardens, a small waterfall and the set of Pirates of the Caribbean. The island is stunning with multi-coloured houses, white-sand beaches and lush forests.

Barbados was our final stop. We went to Harrison’s Cave and the stalactites and stalagmites were sensational. We also went to a viewpoint with a genius weather station (see the photo). Then we went to visit the oldest church in Barbados before visiting the rum distillery Mount Gay, my mum was happier about this than me!