Why Go Vegan – For the Animals

Go Vegan for the Animals

Most vegans choose to live a vegan life for moral reasons. Ethical vegans refuse to be part of a system that uses, abuses, tortures and kills billions of innocent lives each year, and view the unnecessary use and consumption of non-human animals and their byproducts to be irreconcilable with living a life free from causing harm. By choosing veganism, we recognize that animals are not ours to use or consume, and we take a stand against cruelty and exploitation by abstaining from its products and practices.

We believe that many people would choose compassion if they knew the extent of the cruelties animals face before they reach their plates, clothing, beauty and household products, zoos, etc. Everyone has the capacity to understand that harm comes to an animal when it is killed for its meat. However, there are nuances within the meat industry, as well as in the dairy and egg industries, that mask the cruelties non-human animals face.

Special thanks to Lucas of Earth & Eats for contributing this thoughtful and heartfelt video.

Why There’s No Such Thing as “Humane” Meat

There are many ways that the industries and individuals who stand to make a profit off of animal exploitation and cruelty try to hide or tame the facts about how animals are treated in captivity or before they are turned into food and byproducts. Terms like “ethically sourced,” “humanely raised,” “free range,” “cage free,” and more show up on animal products to put the consumer at ease, but the bottom line is that it’s not an ethical practice to kill a living being that does not want to die just so you can enjoy the taste of their body for a brief moment in time, no matter how nicely you treated them before sending them to slaughter.

Why Milk & Eggs are Not Free From Harm

A common belief is that a lacto-ovo vegetarian diet (one that abstains from meat but still consumes eggs and dairy) is a cruelty-free choice. While a vegetarian lifestyle certainly creates less of a demand for animals killed for their meat compared to a standard omnivore diet, it unfortunately is still very complicit in the crueler practices faced by animals who are used for their milk and their eggs.

No Milk without a Baby Cow (or baby goat, or baby sheep…) 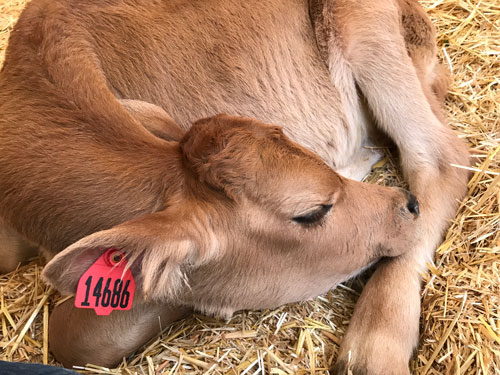 Cows are mammals who, like all mammals, only produce milk as a result of giving birth. Milk is produced in mammals for only one reason: to feed and nourish their young. When a dairy cow gives birth to a calf, however, that calf may never receive the nutrients intended for them. Whether milk is produced in a giant factory farm or on a small family farm, the results are the same: a cow is forcibly inseminated and made to carry her calf to term, after which the calf is taken from her so that he or she doesn’t feed on what is intended to be profit for the farmer. This causes extreme emotional distress in the mother every time the cycle happens, not to mention the physical toll of being forced to birth far more babies than she would naturally in her lifetime, stand confined on concrete floors to be milked three times per day, and fed hormones and antibiotics to increase her milk production and stop the spread of disease that these conditions cause in the first place.

The fate of the calf depends on its sex, and is horribly cruel either way: if male, the calf is considered a waste product of the dairy industry (because he will never produce milk), and may be put into veal production, where he will be kept confined and restricted of nutrients until his very early death (usually around 8 months old). If the calf is female, she will be put into dairy production as soon as her body is able to conceive, and meet the same cruel fate as her mother. The natural lifespan of cattle can be up to 20 years, but a dairy cow often will only make it to age five before no longer being viewed as profitable, and sent to slaughter. These fates are similar for other female species used for dairy, including but not limited to goats and sheep.

The Hidden Costs of Eggs

Most egg-eating folks assume that, because chickens naturally lay eggs, eating eggs comes at no harm to the hens. However, we know this is not the case. A wild hen will only lay around 10-15 eggs per year (other sources estimate 20-30), and despite being natural, the process comes at a huge physical toll on the hen’s body. To meet the demands of eggs for consumption by humans, hens have been “intensively bred” and subjected to all manner of cruel practices to force their bodies to overproduce the estimated 250-300 eggs each egg-laying hen is forced to yield annually. If between 10 and 30 eggs carries a physical burden on a hen’s body and reproductive organs, imagine the pain and anguish 10-25 times that production causes.

The natural lifespan of a chicken can be anywhere from 8-15 years, but an egg-laying hen often won’t make it to age two before she is considered “spent” and no longer of use to the industry, at which point she will be killed. As fertilized eggs are hatched by the thousands in hatcheries to produce newer generations of egg-laying hens, naturally around 50% of the time a male chick is born. Much like male calves in the dairy industry, a male chick is of no use to the egg industry, and is considered a waste product. Male chicks are routinely collected and ground alive when they are less than one day old. Eggs produced in these facilities are not a cruelty-free byproduct for anyone involved.

What about eggs from a backyard hen? While the hens cared for more as pets than as egg-laying machines in factory farms might be given some kind of improved quality of life (and in other cases, may not), eating or selling their eggs is still a basic form of exploitation. Though the day to day cruelty may possibly be diminished, these individuals are still being used for what they can provide for someone else, and not given bodily autonomy. Buying eggs or chicks to become backyard hens also feeds directly into the exploitative and cruel practices of egg farming that most “urban farmers” are trying to avoid in the first place, as well as perpetuating the profitability and desire of eggs. 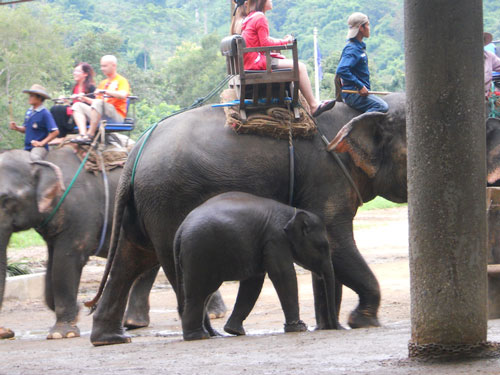 All around the world, there are unfortunately countless ways in which animals are being exploited as entertainment for tourists who have traveled from afar and have money to spend. Animals are held captive and chained up for petting zoos, their bodies are rented for rides and to carry tourists’ luggage, they are forced to perform, etc. Their body parts, pelts, bones, teeth and more are sold as “exotic” souvenirs, often illegally. There are even places that call themselves animal sanctuaries that are basically glorified petting zoos, preying on people’s desires to have a hands-on animal experience during their travels and hiding under the guise of providing the animals with sanctuary.

As compassionate travelers, it is our responsibility to know better.

When faced with animal services or entertainment while traveling, the main thing to remember is this: If it isn’t something an animal would do in its natural environment without human interference, it is a form of exploitation. Monkeys don’t dance in the streets for coins because they want to. Elephants, tigers, and other wild animals don’t perform circus tricks by choice. Horses, donkeys, elephants, and other animals exploited for transportation do not want to carry humans or their luggage on their backs. No one wants to become another tchotchke on a tourist’s mantel.

For an example of some of the animal exploitation found in Thailand, read Giselle’s blog, What Not to do in Thailand.

Animal Captivity and Why Most Zoos are Not Aiding in Conservation 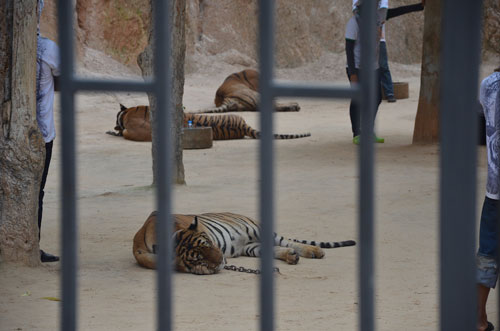 The main argument in defense of zoos is that they are aiding in conservation efforts for endangered animal species. The idea is that some animal populations have been so threatened that human intervention is needed to help these species regain healthy numbers to be released back into the wild. However, this rarely is the case.

The man-made habitats in zoos, and the number of individuals within a species that can be contained there, are rarely conducive to breeding enough new members of that species to deem their captivity justifiable, even if it were only temporary. Breeding groups of animals without enough individual diversity can lead to inbreeding, and can weaken the group over time. Captivity is also not conducive to natural mating, and does not generate the number of new members of a species these efforts aim for. The endangered species angle is also mostly a farce because most of the animals kept in zoos aren’t endangered or threatened by extinction in the first place, and the number of animals bred in captivity and then released back into the wild is astonishingly low compared to the amount of breeding programs in zoos.

Additionally, animals bred and raised in captivity are not socially or even sometimes physically equipped for reentry into a wild population. They also bring with them the possibility of disease that the wild populations don’t have immunity for, or are weaker and unable to hunt for themselves, or fend off possible predators.

Most zoos are first and foremost businesses, and oftentimes their bottom line is not the well-being of the animals, but rather the satisfaction of the paying customer. If you want to support true conservation efforts, we suggest finding credible organizations to donate to, where you most likely will not see the animals in person, but will know your money is being put to ethical ends.