All roads lead to Tomsk 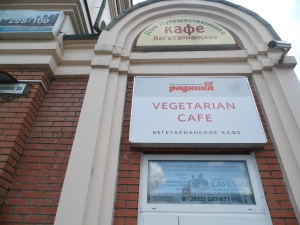 Tomsk is my hometown. It is situated in the forest of Taiga, in the centre of Russia, 4 hours by plane east of Moscow. I was born, raised and educated there until in 2002 I came to the UK to do my PhD. I go home to visit my loved ones, and to eat vegan. Over the years, the vegan scene has expanded manifold and now you can buy vegan foods in supermarkets and specialised shops, and you can eat out. Particularly tempting are all the wild goods you can get: real forest mushrooms and berries.

Tourists often come to Tomsk for its beautiful wooden architecture, as well as for the breathtaking scenery. 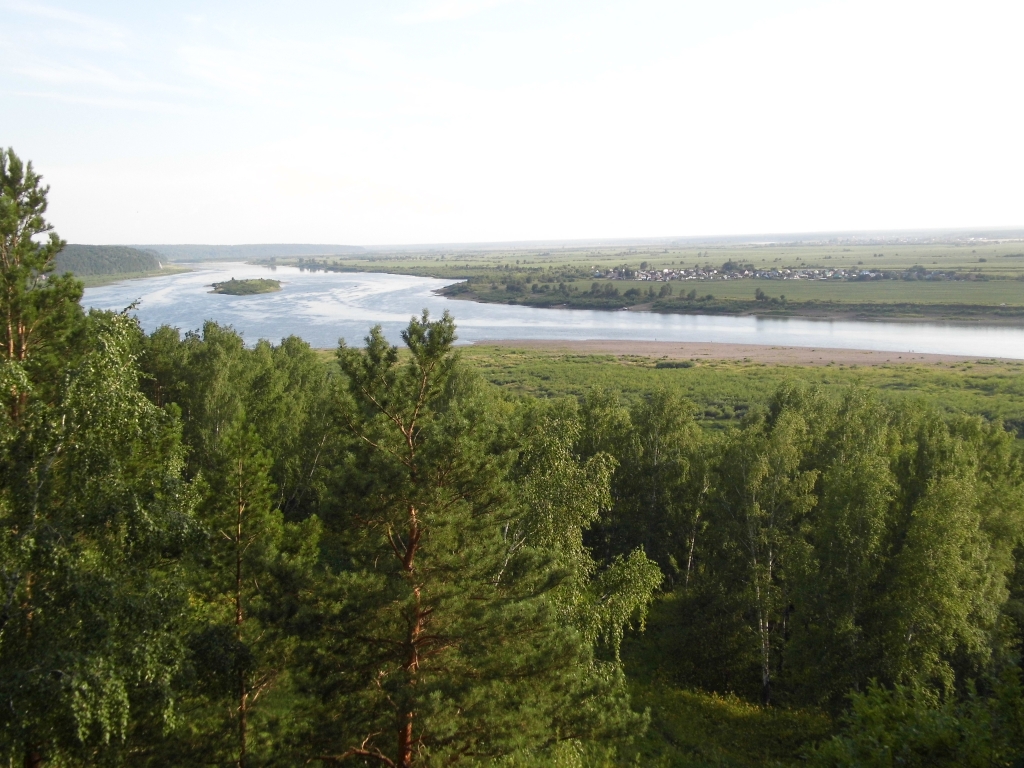 Tomsk is an education and research centre. Tomsk State University was opened in 1888, the first to the east of the Urals. There are now nine Universities and Institutes, 15 Research centres and a special economic zone of Applied Science in Tomsk and in the nearby special “Academic Town”. The main focus of the leading research centres is nano technology. 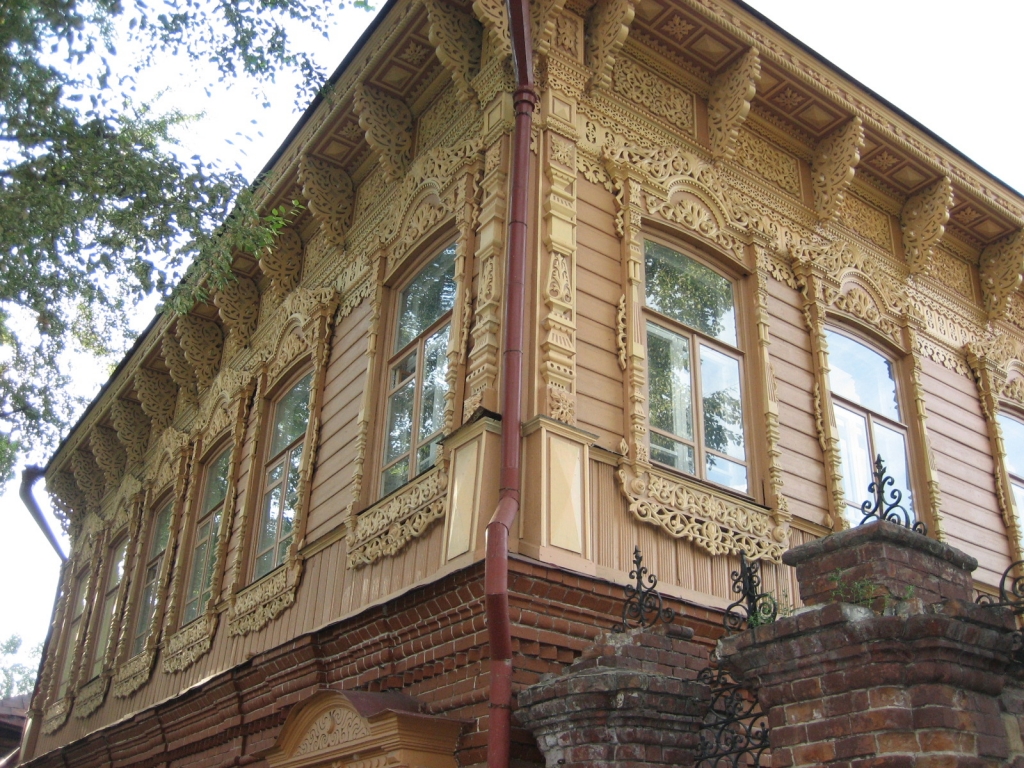 Other traditional avenues of Tomsk science are nuclear physics, geology, automation, and communications. Oil and gas constitute a large part of Tomsk economy. Over half a million people live in Tomsk. The city boasts a sizable student population, which includes students coming from other regions and countries to study here.

Until a vegetarian shop opened in Tomsk in 2010, I had known that the only way I could get vegan food was to cook it myself at home. At cafés all you could get were side dishes such as vegetable salads. Since the shop has opened however, visiting it has become the highlight of my staying in Tomsk. I especially love vegan substitutes to all the meat products I remember from my childhood, such as traditional Soviet luncheon rolls. I could never get these substitutes in the UK.

What do they eat in Russia?

Conventional current Russian cuisine consists of a lot of carbohydrates, such as potatoes, noodles and pasta. Omnivores consume processed meats: hot dogs and meat mince made into meatballs or in pelmeni, Russian dumplings. New foods have penetrated and become popular in Russia: you can frequent a pizzeria or order sushi to the office.

Two distinctive features of a diet of an ordinary Russian citizen: Firstly, it’s a wider inclusion of cereals. Buckwheat, for example, is a staple and an accompaniment to meat. Millet and other grains, such as wheat and barley in various forms are also popular and enjoyed in the form of kasha – cereals boiled in water or milk.

Secondly, Russians eat an abundance of fresh vegetables in summer and a comparable wealth of preserved vegetables in winter – all thanks to the fact that tending an allotment is so widespread. The cities are usually surrounded by large expanses of allotments.

Are there any vegans in Russia?

There is one large organisation in Russia a Western vegan would find familiar: “Vita: A Centre for Animal Rights”. Vita promotes compassionate lifestyle through working with mass media, vegan celebrities, organising conferences and seminars and conducting research into public opinion. 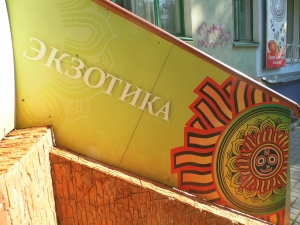 When you look for vegan or vegan-friendly cafés and restaurants in Russia’s large cities you will find that roughly one third of them are Hare Krishna enterprises, one third are attached to a yoga centre, and the rest are independent vegan cafés.

Some Hare Krishna-affiliated outlets (but not all) serve Prasad: food prepared and blessed according to the religious teachings. Prasad has been known to cause controversy. Leaders of Islam and Judaism have warned their followers against consuming Prasad.

A company, Jagannath, named after a manifestation of Lord Krishna, is owned by Hare Krishna adherents. Jagannath runs a franchise of health food shops across the country and a chain of cafeterias in major cities.

Jagannath: my vegan home in Tomsk 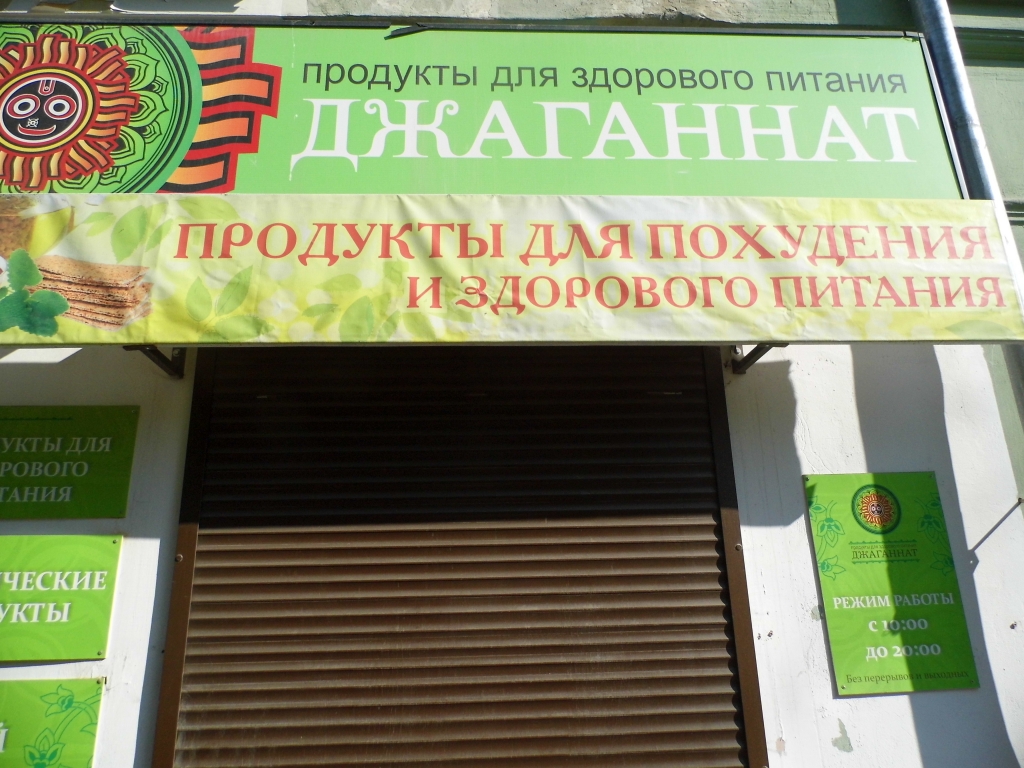 Jagannath shop in Tomsk sells a wide selection of world cuisine ingredients and vegan products, such as the most popular items: vegan luncheon rolls, salamis and sausages. These disappear off the shelves particularly quickly during orthodox fasts and the Lent.

Elena, manager of Jagannath in Tomsk since 2011, says: “Our top seller is human interaction. We are here to offer space for meeting, sharing, learning and to offer the widest choice of health products possible.”

Elena describes people who come to veganism in Russia as: “Adherents of Hare Krishna movement and people interested in Vedic culture in general.” Russian Vedism is a Neo-Pagan movement focused on Russian pre-Christian heritage.

The good spirit of Radhika Café 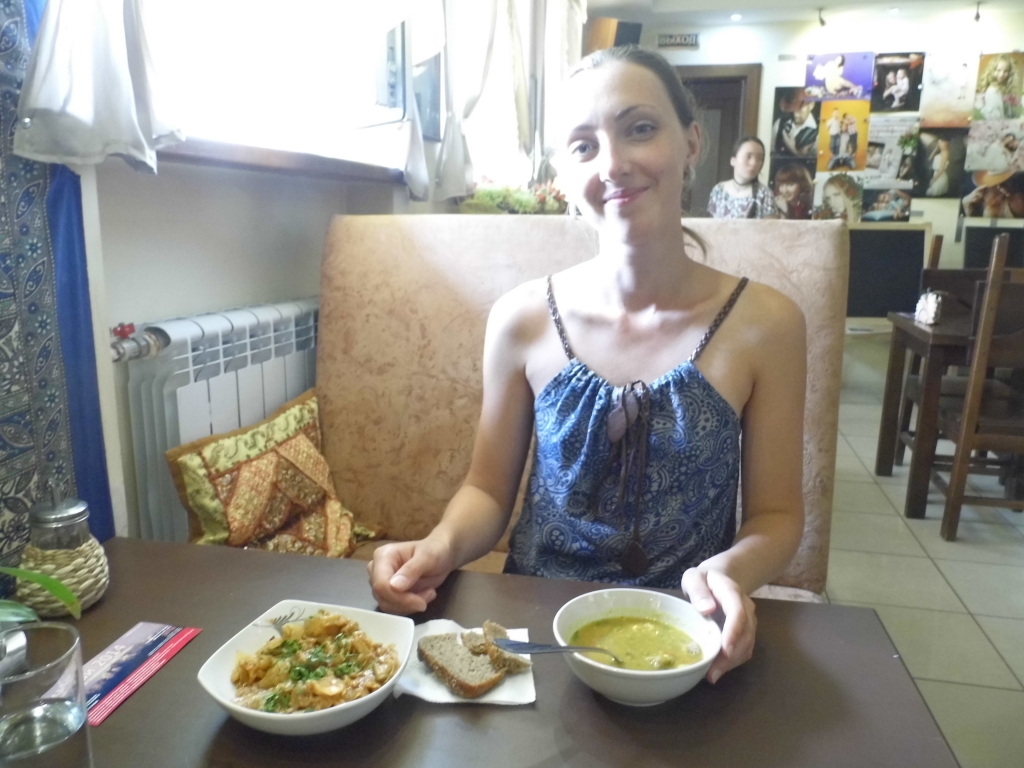 Olga Tablozhina with her vegan lunch: Dhal and Braised cabbage at Radhika

Olga Tablozhina is a cook at Radhika café in Tomsk. The café opened its first premises in 2009, before moving to a larger space in the city centre. When I visited the café just after lunchtime, practically all of the tables were occupied. 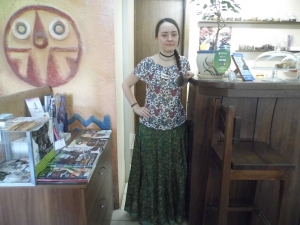 A waitress at Radhika

Olga told me that Hare Krishna devotees were the café’s first customers, followed by their friends and then general public. For Olga, “veganism is means to an end, which is growing spiritually and being closer to God. Living in a compassionate way is the way to do so.”

Where to shop for vegan goodies in Tomsk

Apart from Jagannath, there is an Indian goods shop called Sarasvati. It is located on the 1st floor of the Shopping Centre “Prospect” at 159 Lenin Pr. They stock spices and vegan foods, including soya products and luncheon rolls.

You might want to try a vegetarian take-away and delivery service, Amrita. On the menu are four types of dumplings, inspired by Chinese, Russian, Ukrainian and Korean traditional cuisines. The majority of fillings are vegan. They are clearly marked with a “v” on the menu. If you drop by their outlet, you could even point at the “v” options, without having to speak Russian.

Siberian Cedar (Сибирский кедр) is a native Tomsk brand. The company uses pine kernels to create a variety of confectionery. Some products on offer are vegan. They are: Cedar Halva, Cedar Sticks (coated in dark chocolate), and all “Marmalade Iagoden” sweets with pectin. These are available in many of the city’s supermarkets and sweets shops, as well as on the two main markets.

I spoke with my friend Olga Sigall, a professional actress, now a driving instructor, who practised various alternative healing systems even during the Soviet time. She now eats a diet of 70-80% raw vegan food.

Olga Sigall confirmed that yoga centres, along with Hare Krishna centres, play an important role in promoting veganism. There is almost always a vegetarian juice bar and/or a café. The instructors will also point attendees toward a more healthy plant-based diet.

Raw food scene is Russia is very young and consists mainly of early adopters who connect through the Internet. Nevertheless, raw foodists are some of the most noticeable and vocal propagators of compassionate lifestyle in Russia, due to their enthusiasm.

Russian cuisine has contained many raw food dishes before the advent of the current raw food movement. These have been seen as starters and side dishes. Furthermore, because many people hold allotments, frozen berries: strawberries, raspberries, black currants, red currants and gooseberries, are eaten as dessert in winter. There are also sugary berry preserves people make without the use of heat. In my childhood, my favourite dessert was finely grated carrot with sugar: not very healthy, but delicious. 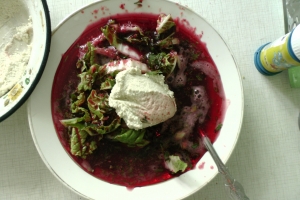 The most popular among raw preserves must be Russian sauerkraut. So important it is to Russian diet that many work places specifically order truckloads of cabbage for their workers in autumn, so that they could salt themselves barrels of sauerkraut. Successful mushroom hunters fill their bathtubs with suitable types of mushrooms and salt them there.

Olga Sigall told me: “All sorts of people become raw foodists in Russia. Some want to lose weight. Some search spiritual growth. Others want health.”

The energy of raw

Veleslava Kopytova, a teacher of Women’s Sacred practices and Russian Vedism strives to build a raw vegan community, which includes her pupils, friends and their children. She told me: “We get together just to be together, not necessarily to eat raw food”.

Veleslava Kopytova learnt from the books of Russian vegan raw foodists: Alexander Yeliseyev and Viktoria Butenko. Viktoria Butenko is one of the gurus of the movement. She switched to raw veganism in 1994 and wrote several books about green cocktails, raw food and its health benefits. Viktoria now lives in Oregon, USA and teaches raw food around the world. 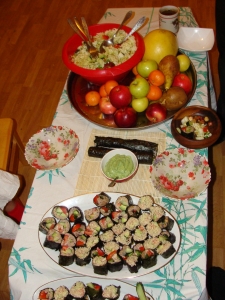 For Veleslava, vegan raw food has become a way out of a lifetime of ill health. She eats vegan raw food, with periods of eating a raw food monotrophic diet.

Veleslava shared with me her wish “for vegan raw food cafés in Russia where you can bring your children. I want a raw vegan to feel welcome in every city on earth”.

M15 becomes the base for Ruslan Sumtsov, Russia’s prominent vegetarian chef, when he visits Tomsk. Ruslan runs workshops at the Centre M15 and does a seminar for professional chefs. Ruslan’s Mother is one of the elders of the Hare Krishna community in the Asian part of Russia; thanks to her, Ruslan became lacto-vegetarian when five. Ruslan Sumtsov is an official representative of Chef Consulting, and a vegetarian Consultant Chef for Metro C&C. 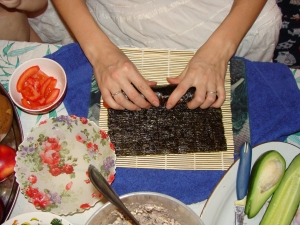 Ruslan’s work includes helping omnivore restaurants to introduce vegetarian dishes into their menus and assisting vegetarian start-ups. The Chef at Jagannath and other restaurants, he makes appearances on national television.

Ruslan is convinced that spirituality is not the main reason for people to go vegan in Russia, or at least he would like it to be that way: “My main goal is to make [vegetarianism] a normal way of life. Health is fashionable nowadays, and healthy eating is fashionable.”

…but it won’t stop there 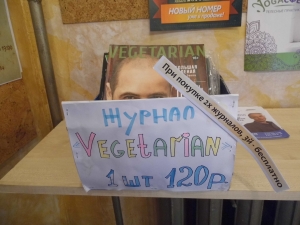 VegetarianRu Magazine is on sale in health food shops and cafes

There are some surprising positive signs of veganism gaining popularity in Russia. For instance, an owner of one of the supermarket chains in Tomsk had become a raw vegan and his supermarkets expanded the range of vegan products.

Ruslan Sumtsov told me: “I am optimistic about the future of vegetarianism in Russia. Otherwise, I would have been changed my line of work”.

Olga Tablozhina was also positive: “I am determined to do everything in my power to develop vegetarianism in Russia.”

Oxana Poberejnaia is a frame drummer, writer and an artist at http://poeticoxana.wordpress.com. She is in a world music band, Soma. Oxana’s poems and prose have appeared in UK literary magazines and anthologies. Oxana is a regular contributor to the international blog Feminism and Religion. She also paints watercolours.