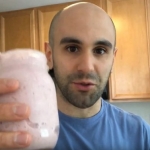 My name is Joe. I’m not that much of a traveler, but I try to go on a trip at least once a year. Ever since going vegan in 2014, I’ve found travel to be way more fun. This is especially true as the years go on as there seem to be more vegan restaurants opening on a daily basis.

For better or worse, I’m quite the food critic when it comes to vegan restaurants. If the place serves up a well-crafted dish, I’m the type to rave about it for months on end. On the other hand, if they try to pass off vegan cuisine as something boring or unappetizing, I tend to get annoyed! Of course I wouldn’t leave a negative review over that, but I like to see plant-based cuisine represented at it’s absolute best – because I believe it is the best cuisine out there – ethics and health aside!

Aside from travel, I consider myself to be a real geek in the kitchen. I love testing new recipes and trying out new gadgets. You can see more about what I do on my blog, ThriveCuisine and on my YouTube channel, Kitchen Tips by Joe. On there, I do everything from show people how to prepare tofu for stir fries, to how to make nice cream and smoothies the right way.

Just so you get the idea of what I mean, there’s an example of me making a Frappuccino smoothie. No, I’m not a real chef, the hat is just for fun.

Tied into everything I do in the kitchen is a sense of frugality. Although I love splurging on certain things, I believe living within one’s means is very important. That being said, I believe you can travel and eat well on a budget. With a little preparation, I also strongly feel that the vegan lifestyle is the cheapest on the planet since it’s the least resource intensive.