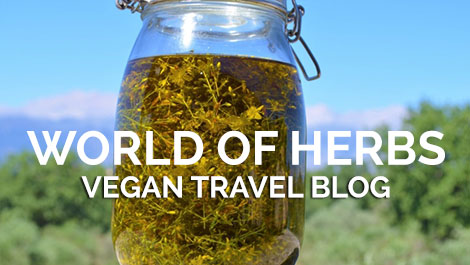 A sunny day in Crete today, as usual. I was foraging the garden to pick the vegetables for the day’s cooking workshop, so while looking around I suddenly realized…it is the season! The blooming season for St. John’s Wort. Our farm is full of little yellow blooming bushes here and there, in between the vegetable patches. We often make St. John’s Wort infused oil and we use it during our natural cosmetics workshops. 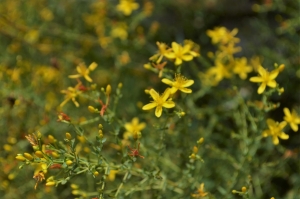 So I thought instead of writing a food recipe, I would write a post on how to make St. John’s Wort infused oil. The plant is gorgeous, full of tiny, bright yellow flowers and leafs perforated with tiny holes. The scientific name for it is Hypericum Perforatum and if you squeeze a flower the red oil will stain your fingers. That’s the stuff we want.

St. John’s Wort infused oil is being used in Greece since the ancient times. Spartan warriors used it to treat their wounds after battle and it has been known to be effective against depression and stomach ulcers. It has always been a necessary natural remedy on our first aid kits. Come to think of it …growing up I would never know where to buy it from. We always made it or we were always given some from some aunt or a friend.

The goodness in St. John’s Wort is never ending– it is one of the best wound healers and great in relieving nerve pains, so it is used for bumps, strains and sore joints. Other uses include application on sunburns to soothe and heal the skin and relieve swollen glands. Usually just massaging a small amount into the wound or the affected area will do the trick. 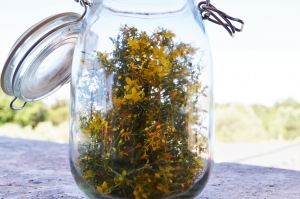 Making it is rather simple. Collect the flowers, place them in a jar, and cover with good quality olive oil.

This is the basic method for infusing oils. We generally use olive oil due to its abundance in Greece, but almond oil can also form a good base. The olive oil allows the soluble fats in St. John’s Wort to be extracted, to diffuse out of the plant material and into the oil!

You will need the plant material but make sure you use the flower heads and only just a bit from the stem.

St. John’s Wort flowering tops (the flowers and a couple inches of the stem. Best picked in the middle of the day, in the sunshine when the natural oils are the most intense.

A jar with a lid

Enough olive oil to cover them 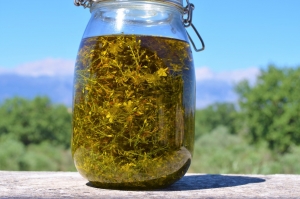 Make sure there are no little bugs on the plant material. Keep the material in the sun for an hour or so and shake well before placing in the jar.

Cover with the oil, make sure all the flowers are covered with oil or it might mold.

Keep it in direct sunlight for a month or so. After a couple of weeks you will see the oil has turned into a wonderful ruby red color.

Strain the oil into separate bottles and keep it in a dark cupboard.

How to use: Rub a small amount into the affected area several times per day.

Some people may have reactions to certain herb plant groups, so when applying an herbal-based oil for the very first time, try just a small amount and give it 24 hours to make sure there is no allergic reaction to it.

Also, St. John’s Wort can interfere with prescription medications (like contraceptive pills) when taken internally so do not eat this oil! 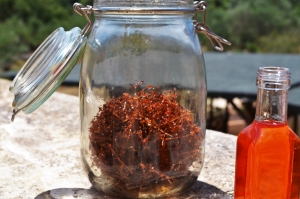 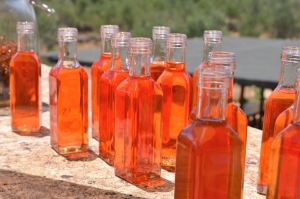