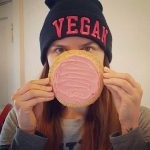 Swung by upstate NY last week to visit the fam and had to stop in at Honest Weight Food Coop in Albany. Their hot/salad bar is always packed with vegan options. Plus they’ve got a great freshly pressed juice bar that knocks ’em out of the park! View